Advance projections for 2Q2020 indicate that Singapore’s GDP shrunk 41.2% from the previous quarter. 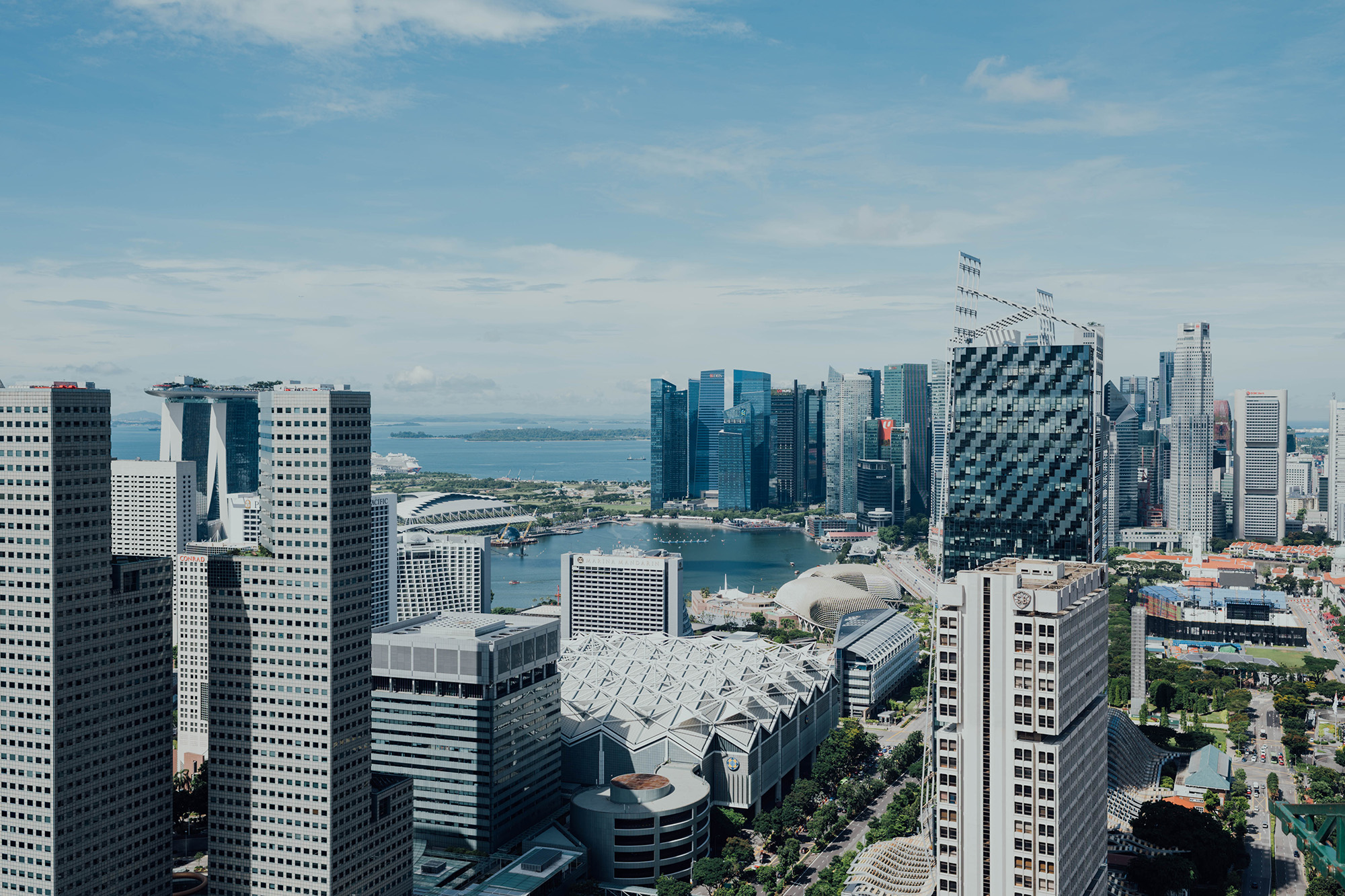 By now, you’ve probably read news headlines that declared that Singapore has entered a technical recession, after advance GDP estimates for 2Q2020 were released by the Ministry of Trade and Industry (MTI) showed two consecutive quarter-on-quarter GDP contractions.

As statistics geeks who love to pour over all sorts of data ranging from unemployment to GST to household expenditure, we took a deeper look at the MTI data, how its calculated, and what it tells us about the state of Singapore’s economy.

As its name suggests, Gross Domestic Product (GDP) is the total aggregate value (gross) of goods and services produced (product) within Singapore (domestic). It is a common metric used around the world to monitor the volume of economic output of a country.

There are three approaches that can be used to calculate GDP figures: output, expenditure, or income. In Singapore, the approach used is based on output:

In other words, GDP is measured by the sum total of value-added across all sectors. Measurement of economic output of each sector is based on the Singapore Standard Industrial Classification (SSIC) framework.

How Are Quarterly GDP Estimates In Singapore Derived?

As you can imagine, it is a mammoth feat to measure the economic activity of the whole of Singapore. Annual GDP figures can be derived from a mix of detailed administrative data (such as corporate income tax filings, GST declarations, audited financial statements, and more) as well as comprehensive economy-wide annual surveys.

However, this approach would not be feasible for quarterly GDP estimates, since much of the administrative data might not be available, and it places an unreasonable burden on companies to have to respond to survey requests with such frequency – not to mention the strain on resources within government statistics departments to process and analyse the information collected.

Thus, GDP estimates in Singapore are compiled using a range of passively available, short- term economic indicators available in each industry, which are used as proxy indicators to gauge quarterly GDP figures.

Because of this, one would not be able to simply add-up quarterly figures to get the GDP output for the entire year, and some variance would be expected, though the methodology is closely monitored and benchmarked against the detailed annual GDP data and fine-tuned in order to get the most accurate estimates possible.

In fact, Singapore’s Department of Statistics (SingStat) first started developing the framework for estimating quarterly GDP output using about a hundred proxy indicators in the mid-1970s. Over the years, their approach has and have refined and expanded to use about a thousand indicators across the industries.

To complement the proxy indicators, the government also send out surveys to a smaller sample set of companies to gauge industrial production, retail trade, business receipts, income projections, and more, especially for industries for which administrative data is scarce or unavailable.

Read Also: GST Increase: Here’s How Much The Government Will Collect – And How Much More Will You Be Paying

What Do The Latest 2Q2020 GDP Estimates Tell Us?

The 2Q2020 advance GDP estimates is significant, because they are the first comprehensive look at how the Circuit Breaker measures have impacted Singapore’ economy, and were computed largely from data in April and May 2020.

Data from MTI showed that Singapore’s economy contracted by 12.6% year-on-year in 2Q2020, while on a quarter-on-quarter seasonally-adjusted annualised basis, the economy shrunk by 41.2%.

Hardest hit was the construction sector, which saw a quarter-on-quarter seasonally-adjusted annualised contraction of 95.6% in 2Q2020, on the back of a 1Q2020 contraction of 12.2%. This was on account of Circuit Breaker and dormitory containment measures.

The manufacturing sector shrunk by 23.1% quarter-on-quarter, mainly due to weak external demand and workplace disruptions, though the biomedical manufacturing did see gains in output. This was a sharp reversal from a 45.5% expansion in 1Q2020.

The service industry, which includes tourism, hospitality and air transport sectors, shrunk by 37.7% in 2Q2020 on a quarter-on-quarter seasonally- adjusted annualised basis, following a 13.4% decline in 1Q2020. This can be attributed to travel restrictions around the world, which put a halt to virtually all air travel and visitor arrivals.

For context, you can refer to this pictorial representation of the size of these hardest hit industries in terms of our overall GDP: 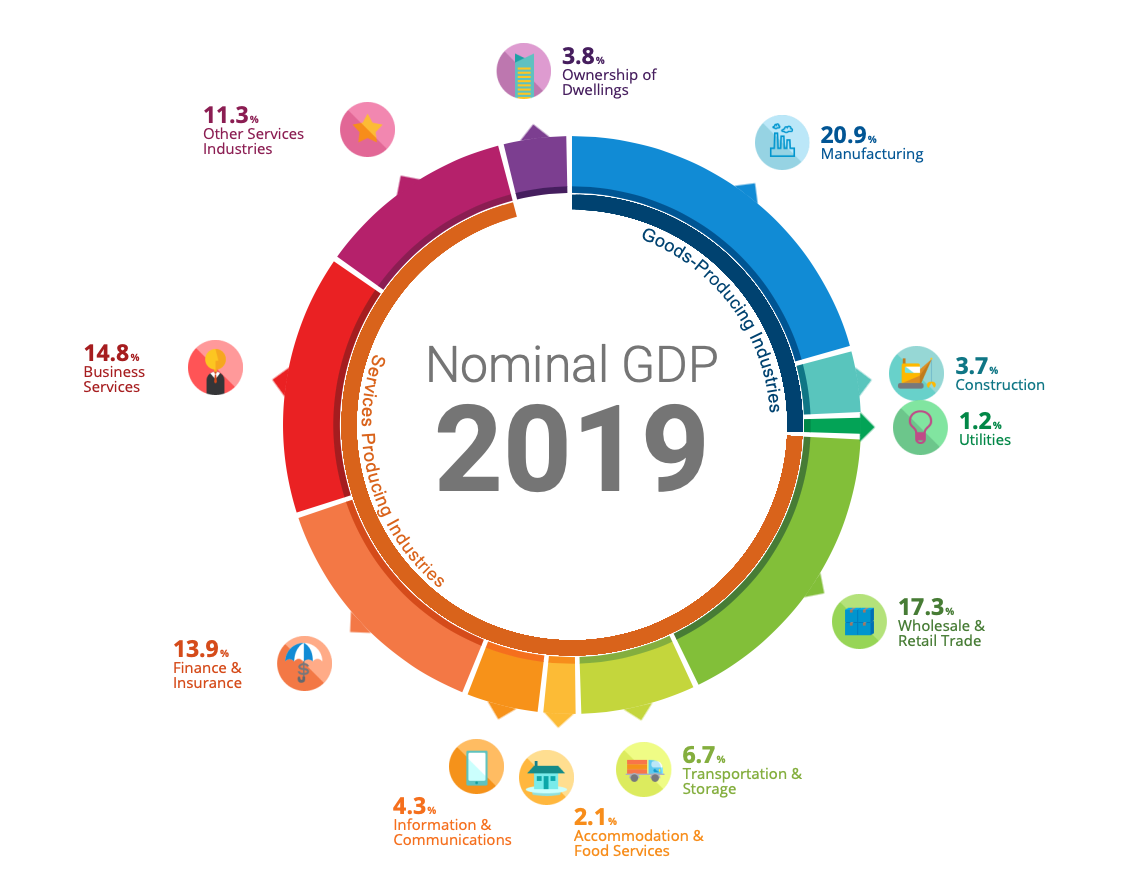 In response to the release of the 2Q2020 advance estimates, Minister for Trade and Industry Chan Chun Sing described Singapore’s economic recovery in the months ahead as “challenging” and “slow and uneven”.

Earlier in May 2020, MTI already revised the GDP estimates for the entire year to between negative 7% to negative 4%.

MTI will release the detailed economic estimates for 2Q2020 – including GDP, inflation, employment and productivity – in August 2020. In the meantime, you can also refer to the 1Q2020 GDP economic data.