It’s still too early to tell how bad the COVID-19 recession will be. 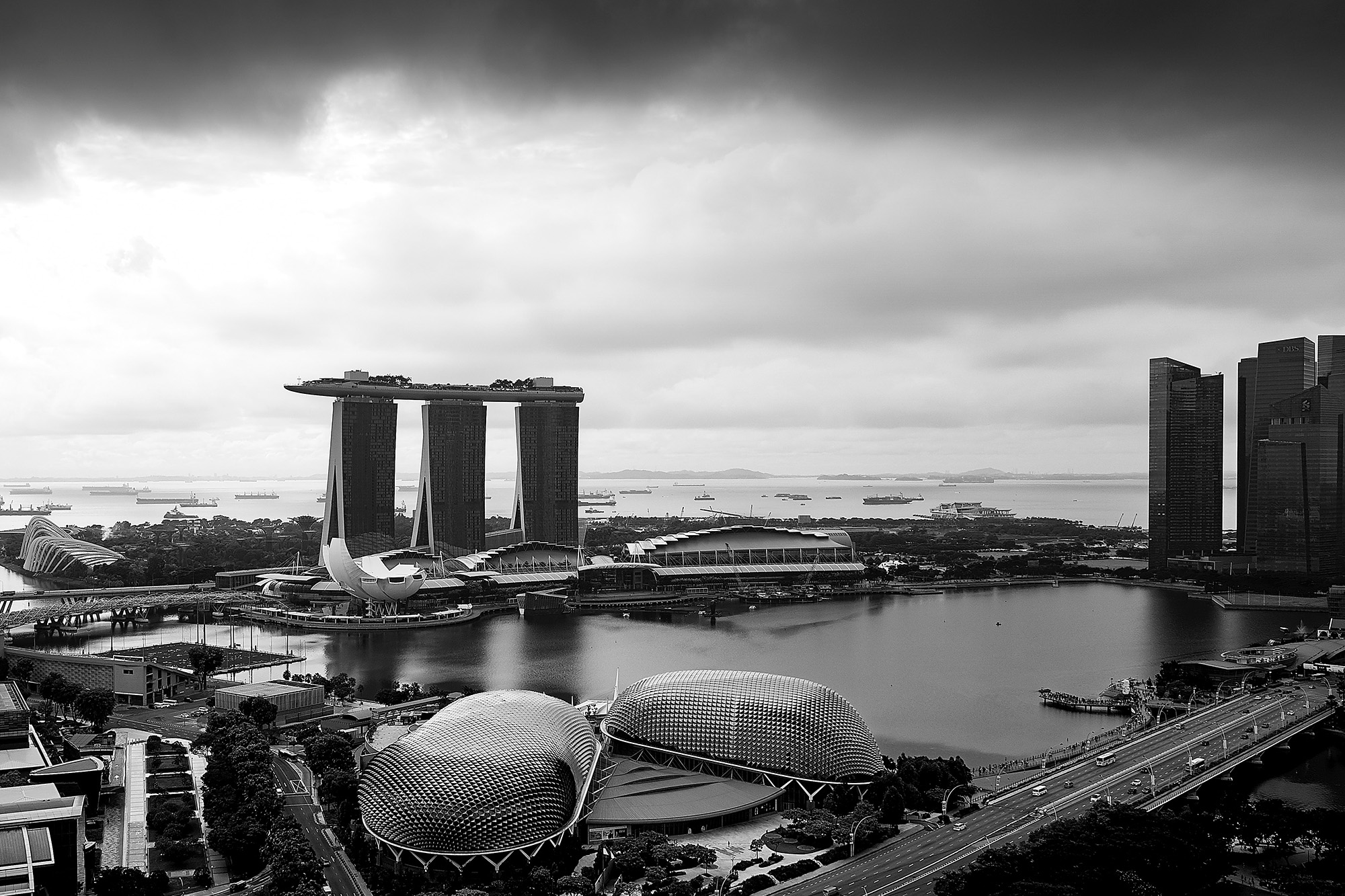 The global COVID-19 is the biggest crisis that Singapore has faced since independence – because of the healthcare impact as well as the impact on the economy and jobs. Retrenchment projections range from the low-end of 45,600 (by DBS analysts) to as high as 200,000 (by MayBank analysts).

But how bad is the situation currently, and are we to expect a wave of retrehcments and companies shutting down after the temporary Jobs Support Scheme has expired, and the state can no longer afford to prolong the inevitable?

We examine the latest Labour Market report for 1Q2020 from the Ministry of Manpower to  find out. Compiled based on surveys of companies, the report covers the period until March 2020, which would give us an early indication of the impact of COVID-19.

Since the Circuit Breaker was only implemented in April, this 1Q2020 report wouldn’t cover the impact of the two-month long Circuit Breaker and Phase 1 of Circuit Breaker’s lifting. The Labour Market Advance Release for 2Q2020 is expected to be released around 30 July 2020. In 1Q 2020, total employment in Singapore (excluding foreign domestic workers) registered its sharpest quarterly contraction ever recorded, with a reduction of 25,600. As a proportion of the total workforce in 1Q 2020, this was a drop of 0.7%.

The hardest hit were the manufacturing (-3,300) and construction (-5,800) industries, though these affected mainly foreign workers. Employment numbers in these sectors is expected to worsen in 2Q 2020 due to work stoppages and supply chain disruptions.

On a somewhat brighter side, some sectors did make gains, such as financial & insurance services (+2,800), public administration & education (+2,500) and professional services (+2,500). 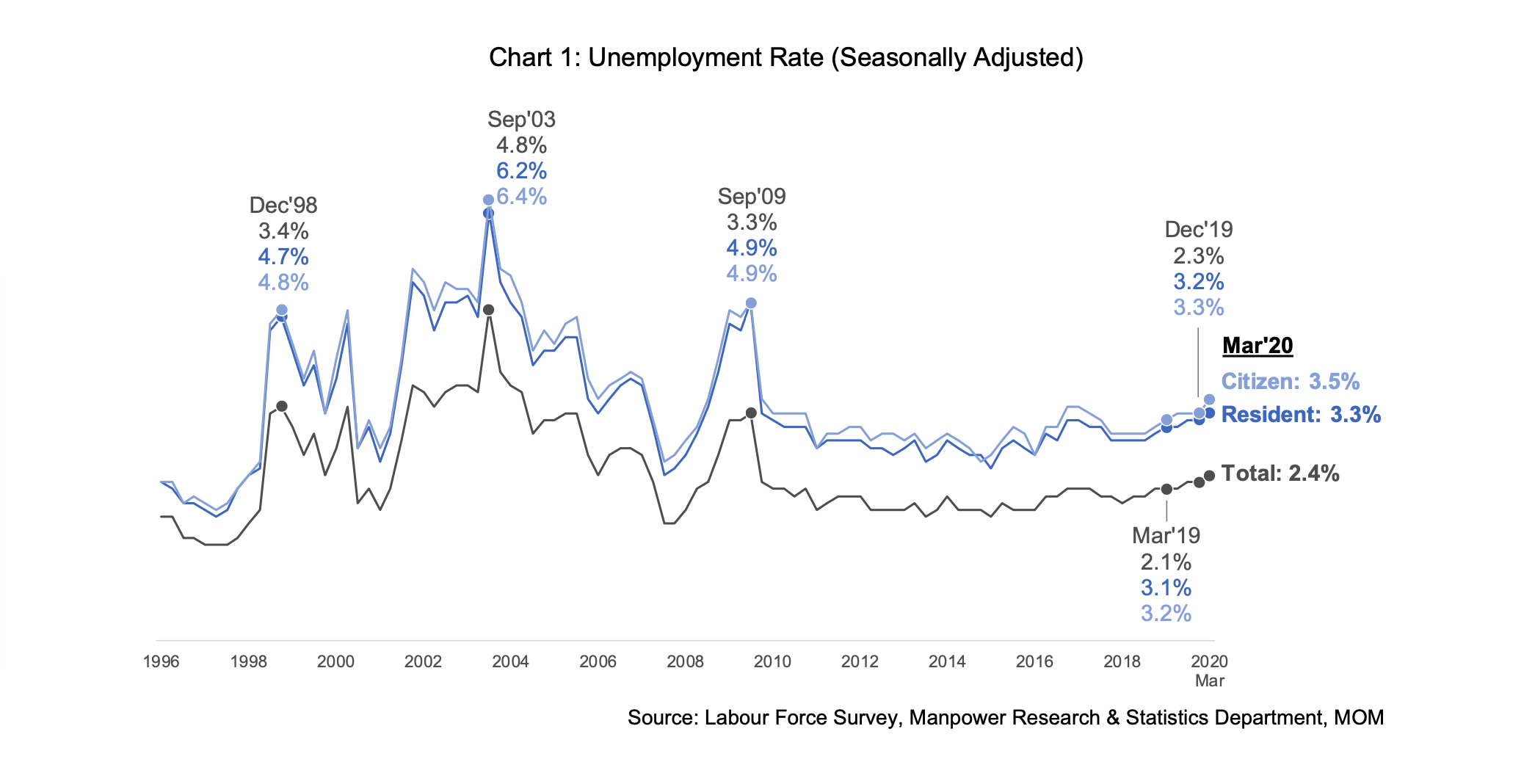 Overall seasonally adjusted unemployment rates rose to their highest in a decade in March 2020. Resident unemployment was rose from 3.2% to 3.3%, while citizen unemployment rose more sharply from 3.3% to 3.5%.

#3 Retrenchments Only Increased Slightly – For Now 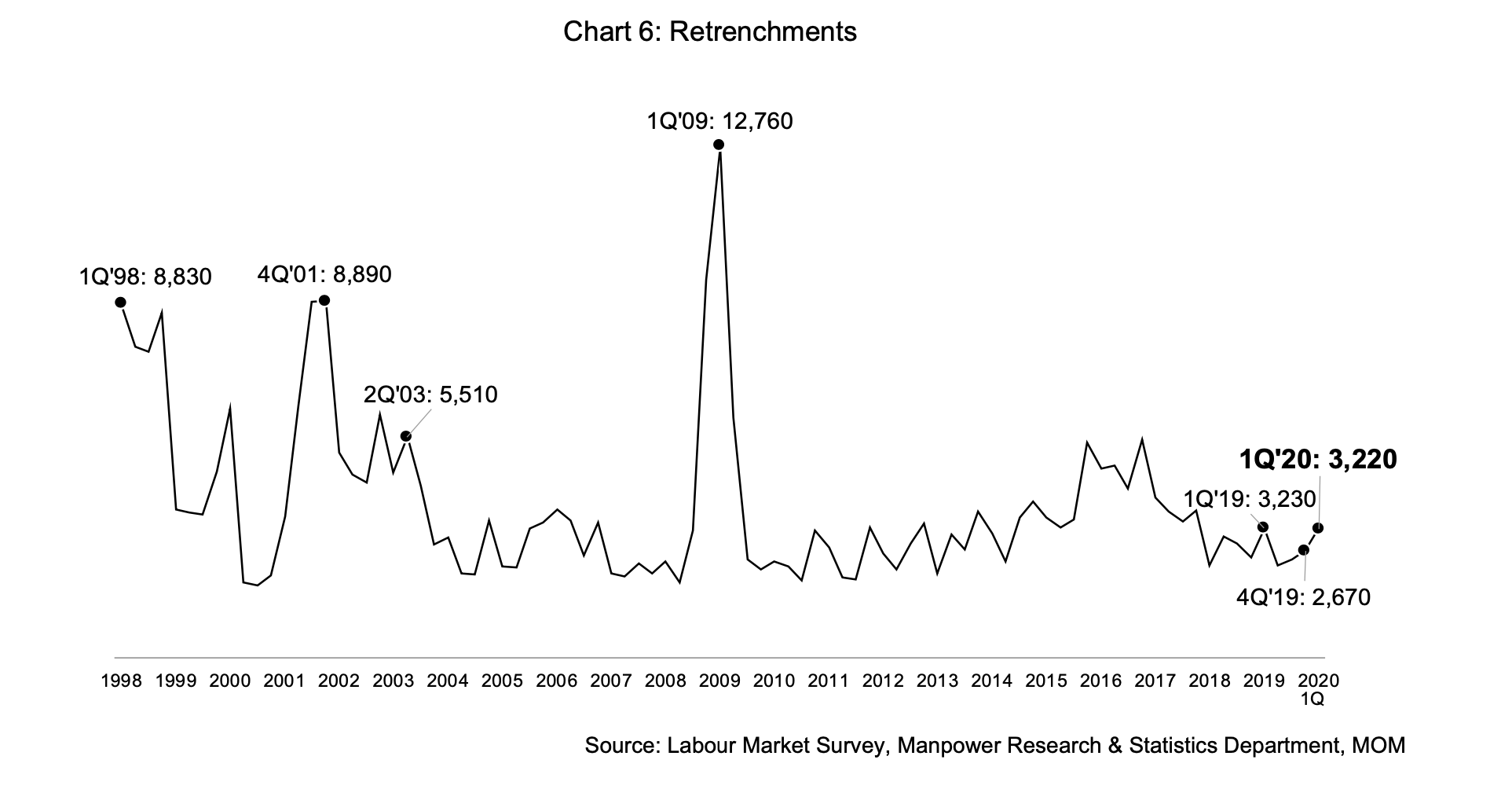 Measures like the Jobs Support Scheme helped prevent large-scale layoffs for 1Q2020, though the number of retrenchments (3,220) still increased compared to 4Q2019 (2,670).

However, because small companies with a small number of employees were more likely to close completely than to retrench, the Ministry of Manpower examined data on business entities that ceased operations in 1Q2020 and estimated that company closures affected about 1,537 local employees, which is significantly higher than the preceding quarter (628).

Alongside retrenchments, there were significantly more employees placed on short work-week or temporary layoff (4,190) in 1Q2020, which marks a fivefold increase from 4Q2019  (840).

The number of job vacancies declined in 1Q2020 to 46,300, which is the lowest it has been in a decade (since September 2010). Job vacancy declines were most pronounced in food & beverage services, as well as the arts, entertainment & recreation. 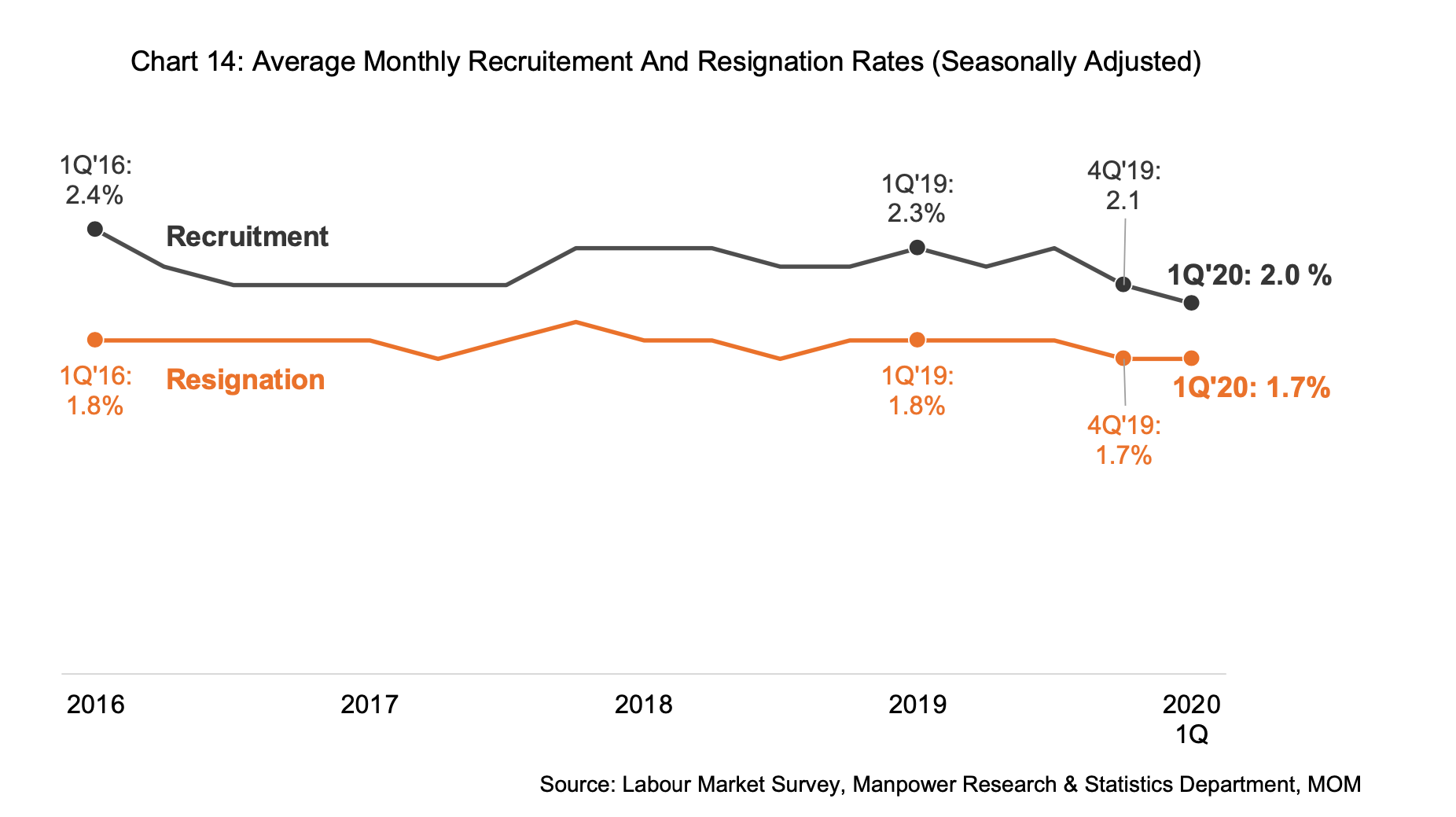 In terms of turnover, we note that the resignation rate held steady at 1.7%, while the seasonally-adjusted recruitment rate dropped to 2.0%.

This suggests that workers with existing jobs aren’t in a hurry to resign just yet amid the difficult job market, though we should note that there wasn’t a drop in the resignation rate either.

Turnover was highest in sectors that continue to see strong demand for manpower such as information & communications, health & social services and public administration & education.

Read Also: Finding A Job In 2020? Here Are Some Job-Seeking Advice As Shared By (Former) Singapore Ministers

Is The Progressive Wage Model An Alternate (And Better) Form Of Minimum Wage?
5 Important Skills For Life And Career We Learned From Playing Video Games Growing Up