Is the Progressive Wage Model already the solution to the minimum wage proposals? 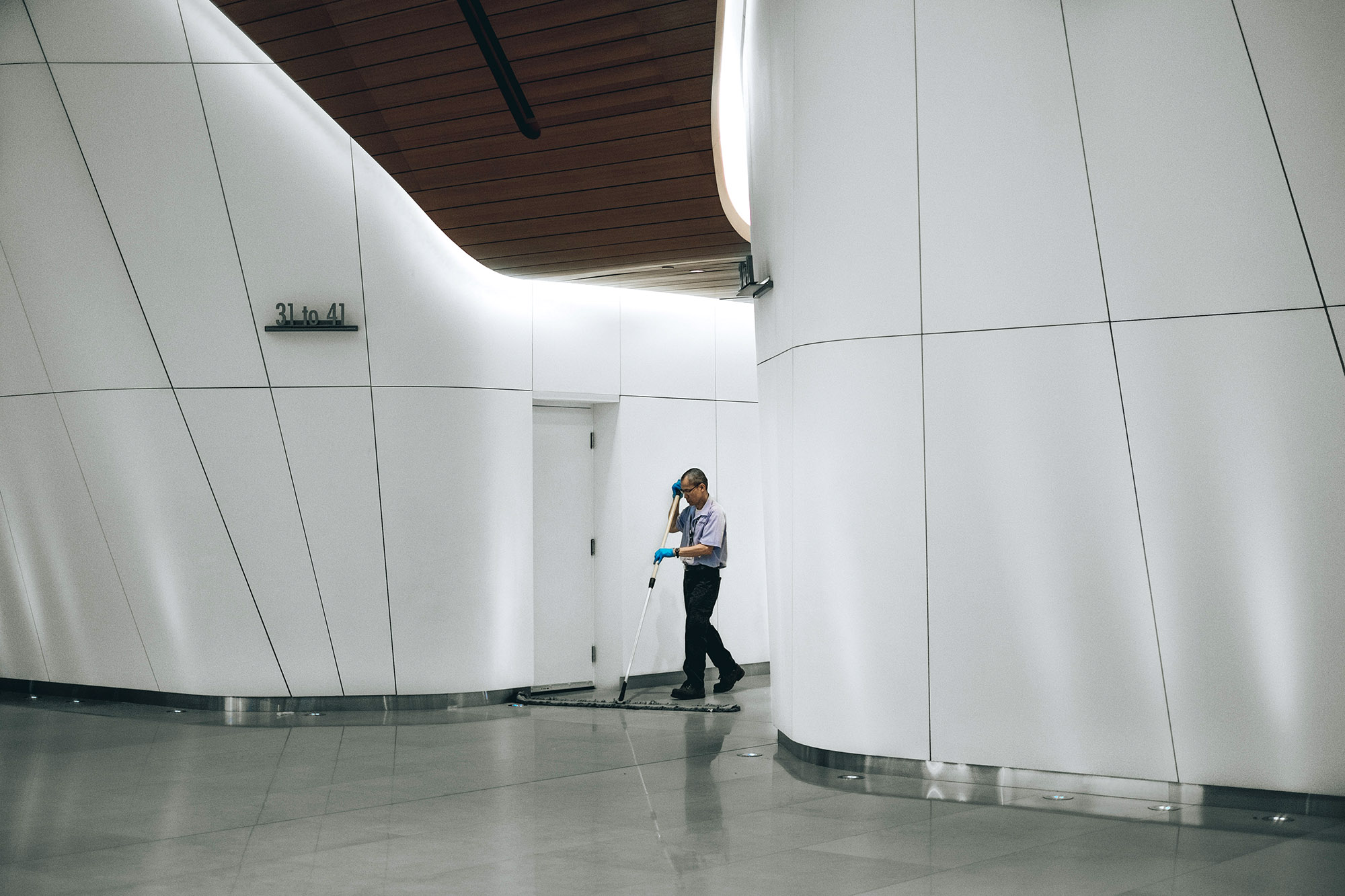 This topic was also brought up by Jamus Lim of the Workers’ Party in a recent debate on CNA. In response, PAP candidate and previous Minister for Foreign Affairs Vivian Balakrishnan said that Singapore already has the Progressive Wage Model, which shares the objective of uplifting wages of workers in Singapore.

Is the Progressive Wage Model a similar, or perhaps an even better alternative, to minimum wage? If that is the case, does this mean Singapore already has in place what some opposition parties and people are asking for?

Before any comparisons can be made, we first need to understand how the Progressive Wage Model works.

Read Also: 4 Things You Need To Know If You’re Planning To Donate To Candidates’ Campaigns During GE2020

How Does The Progressive Wage Model Work?

Introduced in 2012, the Progressive Wage Model states that a minimum wage (pun not intended) should be paid to workers in specific industries. The minimum amount also increases as workers progress in their careers, whether that’s through work experience or by upgrading themselves by attending accredited courses.

Today, the Progressive Wage Model covers Singaporeans and Permanent Residents (PRs) working in three sectors – cleaning, security and landscaping. We encourage you to click on the respective links if you are interested in finding out more details for each sector.

For example, when it comes to wages for Singaporeans and PRs in the cleaning sector, the Progressive Wage Model (PWM) states that from 1 July 2020 onwards, general cleaners working in office, commercial and F&B establishments need to earn a basic salary of at least $1,236 each month. For those working in Conservancy (e.g. town councils), this is higher with basic wage being at least $1,442.

At this point, we need to highlight three important points.

Ironically, these salaries are at a similar range as the minimum wage of $1,300 being proposed by the Workers’ Party. Do note that the Workers’ Party Manifesto mentions ‘take-home’ salary, so this could suggest that gross salary would need to be higher than $1,300.

The Progressive Wage Model isn’t just a flat minimum basic salary to be paid for all cleaners. Instead, when a worker progresses in the sector, workers can expect to earn a higher basic wage. For example, from 1 July 2020 onwards, supervisors at F&B establishment are required to make at least $1,854 – and this amount will increase to $1,910 by 1 July 2021. 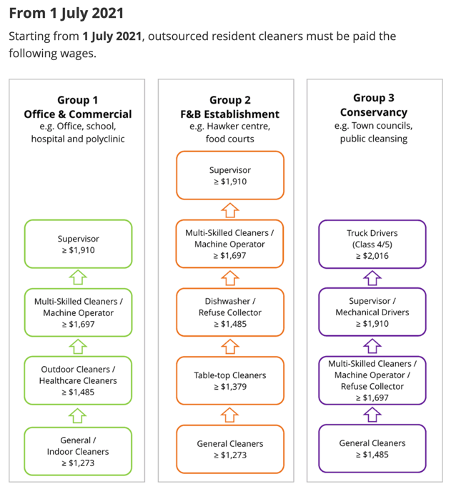 Perhaps, the unique feature for the Progressive Wage Model is that there are different salaries for different industries. For example, in the security sector, the minimum basic wage for a security officer is $1,250 as of 2020 (to be increased to $1,400 in 2021). This is as compared to the cleaning sector ($1,236 as of July 2020). 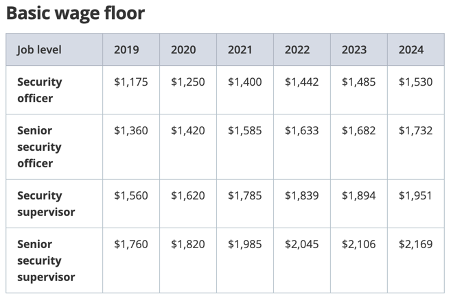 Key Differences Between The Progressive Wage Model VS Minimum Wages

There are some distinct features of the Progressive Wage Model that differentiates it from the traditional minimum wage model practiced in many countries.

That said, there may be no need for that because Singaporeans who are working full-time in other industries may already be earning a decent salary. The Progressive Wage Model is meant to uplift Singaporeans and PRs who are working in low-wage industry, rather than to be dictating what should be the minimum salary across all sectors (i.e. we probably don’t need progressive wages for lawyers or doctors).

While both are not entirely the same, there are perhaps more similarities than differences between the two. But more importantly, the intent of the Progressive Wage Model and what it hopes to achieve can be said to be similar to the intent of minimum wage – to ensure that all Singaporeans, even low-wage workers, can earn a decent living wage and to enjoy salary growth.

Ultimately, whether the Progressive Wage Model is a good substitute for a minimum wage in Singapore is up for each individual to decide.

DollarsAndSense will continue to cover GE2020-related topics from a financial and economic angle. You can stay updated with our articles at our GE2020 page. Mobile users can also keep in touch with our updates on our DollarsAndSense Telegram page.

Finding A Job In 2020? Here Are Some Job-Seeking Advice As Shared By (Former) Singapore Ministers
State Of Singapore’s Job Market In 1Q2020: Here Are 5 Key Figures From Ministry Of Manpower’s Latest Labour Report