Are you an employee focusing on achieving great results, or simply looking at salary guides for reference on your own pay grade? 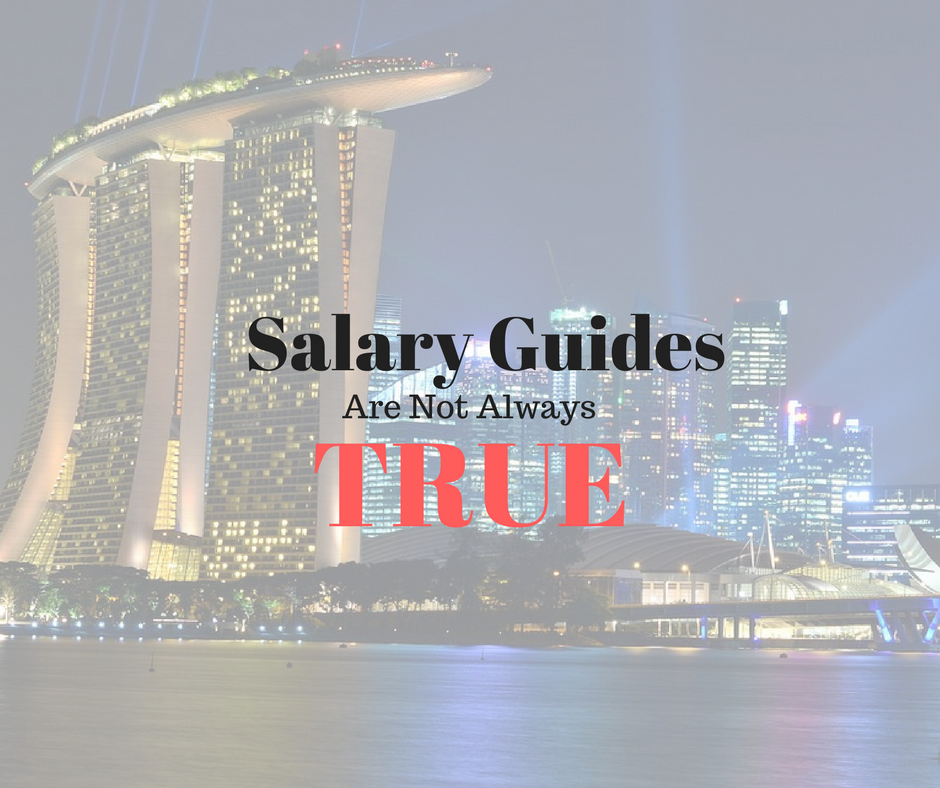 Discussing salary matters with your co-workers, relatives and friends is generally considered taboo in Singapore. While people often discuss their intimate lives and share their deepest fears with those close to them, many feel uneasy discussing their finances, especially their salary.

People also do not exchange salary information with our co-workers. This is due to two main reasons. One, companies usually frown on such practices and secondly, we don’t want to be resented for earning more than our peers or be discouraged for earning less.

With limited information to be found at workplaces, many people will turn to salary guides issued by recruitment firms and job portals to find out if they are being underpaid by their companies. Is this however an accurate place to turn to? Here are three reasons why we think you should take the numbers they give with a pinch of salt.

Read Also: Banks Are Cutting Jobs In Singapore, And Why These Jobs Lost Are Unlikely To Ever Return

# 1 These Numbers Are Usually Compiled With Limited Information

The first thing you have to ask yourself is how accurate these numbers in the salary guides are. In many of the guides, you will read that they are only approximates with a base that is relatively small.

Candidates may overstate current salaries and expected salaries when they’re trying to get new jobs. Clients on the otherhand may also overstate salaries it is willing to pay out. This figure is meant to prompt as many qualified people as possible to apply, and often a salary at the highest-end is quoted, a salary that most people would not qualify for due to experience and skill set.

We are not saying that salary guides are completely inaccurate. However, people need to be aware that such guides tend to over-estimate salaries and should not be treated as gospel truth.

# 2 Based On Oversimplified Factors

As salary guides are put together in-house, usually with no external information, they tend to generalise job roles and potential salaries for them.

The problem with this is that actual job roles differ greatly from company to company for the same position. Multinationals and boutique companies would both require staff to fulfil jobs that are given the same “title”, such as “Accounts Manager” or “Finance Manager”, however, the complexity of the roles vastly differ. Similarly, companies in different industries would require their staff to have certain knowledge, some more than others even within the same position. A “Business Development Manager” for two different companies can be very different.

Another problem is that salary guides sometimes quote in bands of how many years someone has spent in the industry. This oversimplifies the requirement to be an experienced and quality employee. A worker who has been employed for five years in a start-up responsible for almost every aspect of the growth the company enjoys could be vastly superior to someone employed for 20 years in a much larger company but only performing a minor role.

# 3 In The Business Of Getting People To Switch Jobs

The third, and perhaps most worrying reason why salary guides may be misleading, is that like any marketing tool, these guides act to bring in business for the company. And the business for recruitment agencies and job portals is to get people to switch jobs – that’s how they earn their money.

Some salary figures these guides showcase may make people feel like they are underpaid and compel them to look for new jobs, and ultimately deposit their resumes with the recruitment firm and job portal. This expands the network of these companies which allow them to find new candidates for roles to fill at companies that engaged them.

What Are Salary Guides Meant For Then?

We’re not trying to trivialize salary guides and the work recruitment agencies and job portals put into creating them. We just think people need to understand that they should not blindly use it as the sole basis of whether they are being underpaid, or even overpaid.

At best, we can use salary guides to check whether we are within a reasonable salary band. If we find ourselves being “underpaid”, what we can do is set goals for ourselves to achieve during a year, and talk to our managers or bosses during year-end review to increase our salaries to the “industry standard”, or slightly higher. Alternatively, you can look for another job if you are confident you are being underpaid.

Another way to look at this whole issue is to concentrate on being a high-value employee rather than focusing too much in trying to achieve a benchmark pay, whether by these recruitment agencies and job portals or the median salaries reported by the government. High value employees will always have jobs that pay more than run-of-the-mill employees. And by run-of-the-mill, we think these are usually employees who focus less on achieving results, but more on achieving pay grades.

This Is Why I Don’t Work For An Investment Bank Today
The Surbana Issue: Retrenchment, Resignation Or Being Sacked?