Understanding the impact of Circuit Breaker on Singapore’s job market. 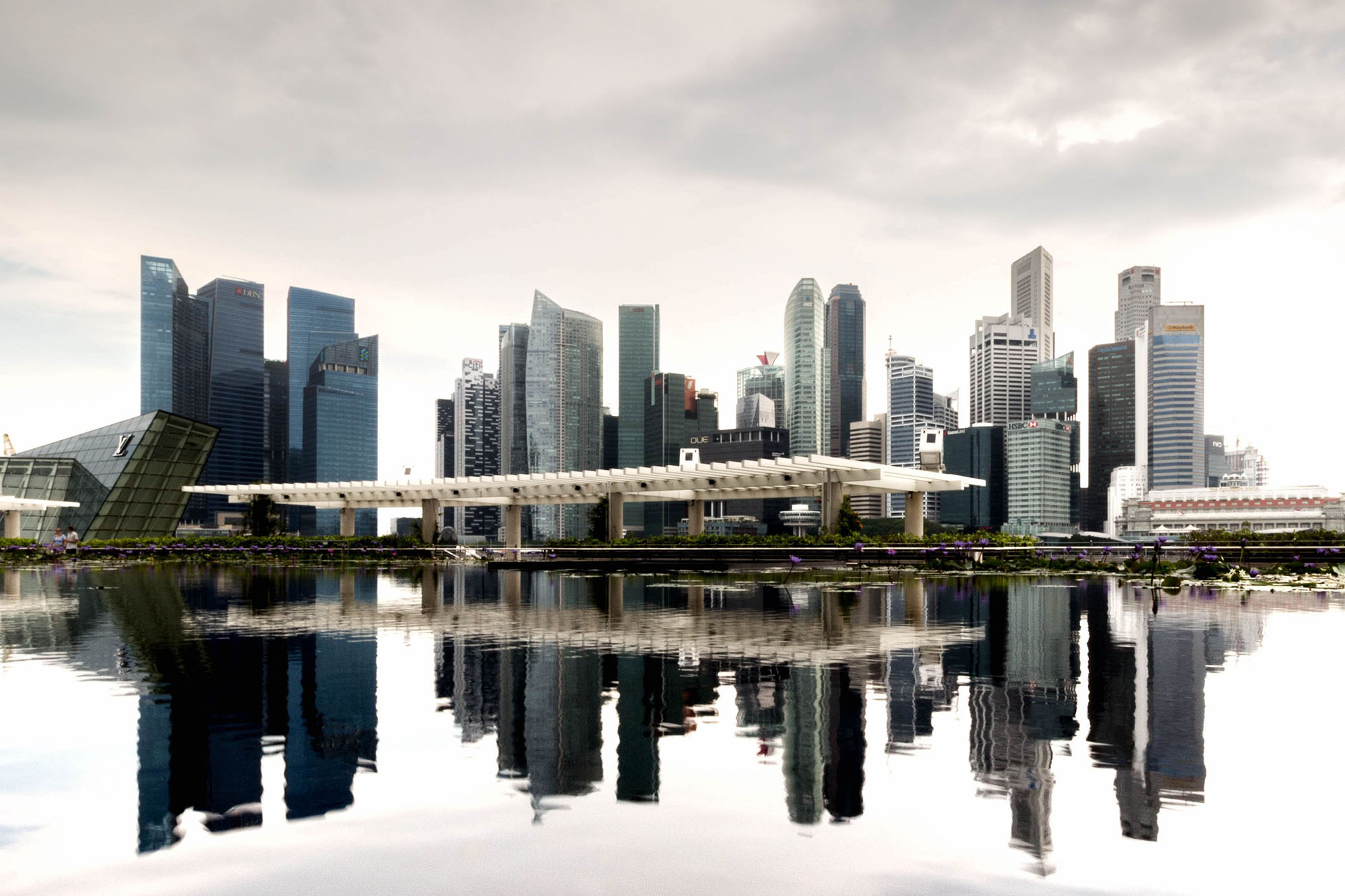 Last week, the Ministry of Manpower made public the advance release of their 2Q2020 Labour Market Report, which covers the period from 1 April 2020 to 30 June 2020.

As we have noted in our analysis of the 1Q2020 Labour Market Report, this 2Q2020 data will give us a better picture of the impact of Circuit Breaker measures on our job market, including employment, unemployment and retrenchment.

Note that figures in this advance release are preliminary, so the actual numbers is likely to vary, though not by much.

#1 Steepest Ever Recorded Drop In Total Employment Of 121,800 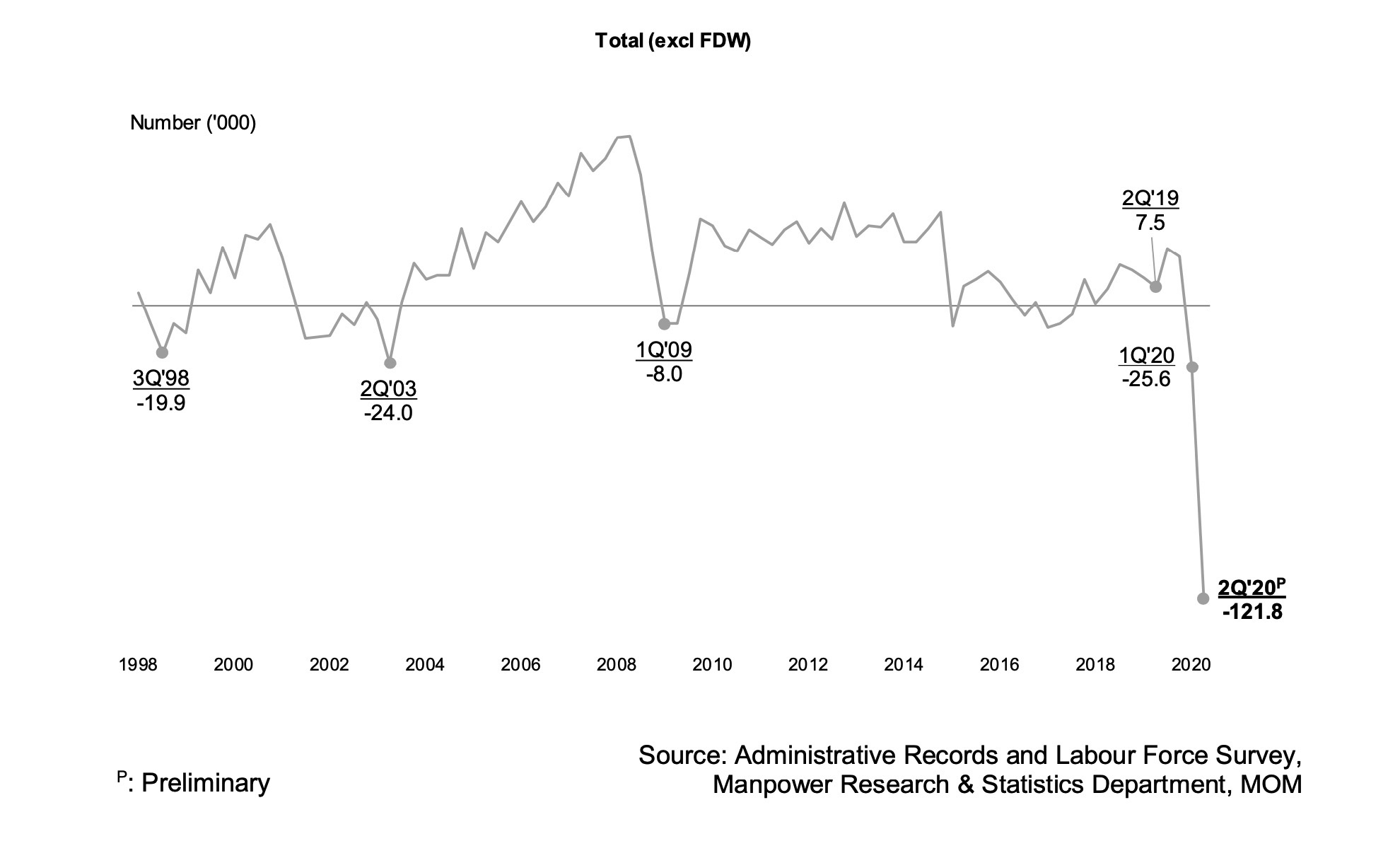 Total resident employment in Singapore, excluding Foreign Domestic Workers and Full-Time National Servicemen, dropped by 121,800 in 2Q2020. This is the most severe drop ever recorded, and brings the total contraction in employment for 2020 to 147,000.

Such a drastic drop in total employment suggests a serious contraction of our economy and GDP output, but we should also be interested to know the breakdown of those who are no longer in employment: how many are Singaporeans or Permanent Residents, compared to those on work passes, who have returned home due to a lack of work.

Employment data is primary from administrative sources (CPF contributions for locals, and work pass data for foreign workers), though the self-employed component is estimated from the Labour Force Survey.

#2 Unemployment Rate Among Singaporeans Climbed To 4% In June 2020

The seasonally-adjusted unemployment rate continued to rise, with overall unemployment going up from 2.4% in March 2020 to 2.9% in June 2020, and citizen unemployment in particular increasing from 3.5% to 4.0% over the same period. This works out to 90,500 unemployed residents, of which 79,600 were Singapore citizens.

Unemployment figures are collated from the Labour Force Survey, which surveys a representative sample of households in Singapore. Unemployed persons refers to 15 years old and older, not currently working but are actively looking for a job and are able to work if offered.

While high, unemployment across the job market are currently below the peaks during the Global Financial Crisis and SARS, though unemployment figures might take some time to catch up with the reality of the worsening economy.

Schemes like the SGUnited Traineeships, SGUnited Mid-Career Traineeships, and temporary jobs created under SGUnited would undoubtedly help keep Singaporeans out of the ranks of being unemployed. We should note that unemployment figures do not give us an indication of how many consider themselves underemployed.

Retrenchments in 2Q2020 hit 6,700, which is more than double of the figure in 1Q2020 of 3,220. This is still below Singapore’s historical peak of 12,760 seen in 1Q2009 during the Global Financial Crisis. Retrenchments rose across the board, though the most significant increases were seen in the Manufacturing, Construction, and Services sectors.

Back in April 2020, DollarsAndSense Business noted in its weekly news roundup for entrepreneurs, freelancers and self-employed persons that analysts painted a bleak picture for the economy, estimating between 45,600 to 200,000 retrenchments in Singapore for the year, compared to 10,690 for the whole of 2019.

We can credit measures like the Jobs Support Scheme (JSS) providing 75% of salary support for Singaporean workers in April and May, and government-supported financing schemes for SMEs for playing a role in keeping massive retrenchments at bay – for now. It remains to be seen what will happen as JSS payouts taper off.

Retrenchment data is collated from Labour Force Survey, and covers companies with at least 25 employees as well as public sector organisations, and it refers to termination of permanent employees and early termination of employees’ term contracts due to redundancy (and not reasons like poor job performance or breaches).

Read Also: Here’s How Companies Can Carry Out A Retrenchment Or Restructuring Exercise Responsibly

What It Tells Us About Things To Come

These sobering employment figures (highest-ever contraction), retrenchment numbers (doubling in 2Q2020) and unemployment rates puts in perspective the massive task ahead for Singapore.

Even the lofty goal of the National Jobs Council to create 100,000 jobs, traineeships and training places for jobseekers suddenly seems inadequate to fully address the impact of COVID-19 on our economy and job market.

The journey ahead is a long one, uncharted one. The task of reviving, rebuilding and revitalising Singapore will require the dedication, resourcefulness, and united efforts of every Singapore worker, company, and the public service.

What Happens To Your CPF Monies If You Declare Bankruptcy

Under What Circumstances Can Retailers Reject A Legal Tender In Singapore?
#Resilience: Here’s Why Singapore Will Not Only Survive The COVID-19 Recession – But Thrive