Among the new announcements at the National Day Rally 2019: increase of retirement age and re-employment age, as well as substantially enhanced financial support for pre-school and tertiary education. For those who didn’t catch PM Lee’s speech, here is a summary of the key announcements that will have a direct impact on Singaporeans’ personal finances, mainly revolving around Education and Older Workers.

Here’s a handy infographic that summarises the key announcements at a glance: 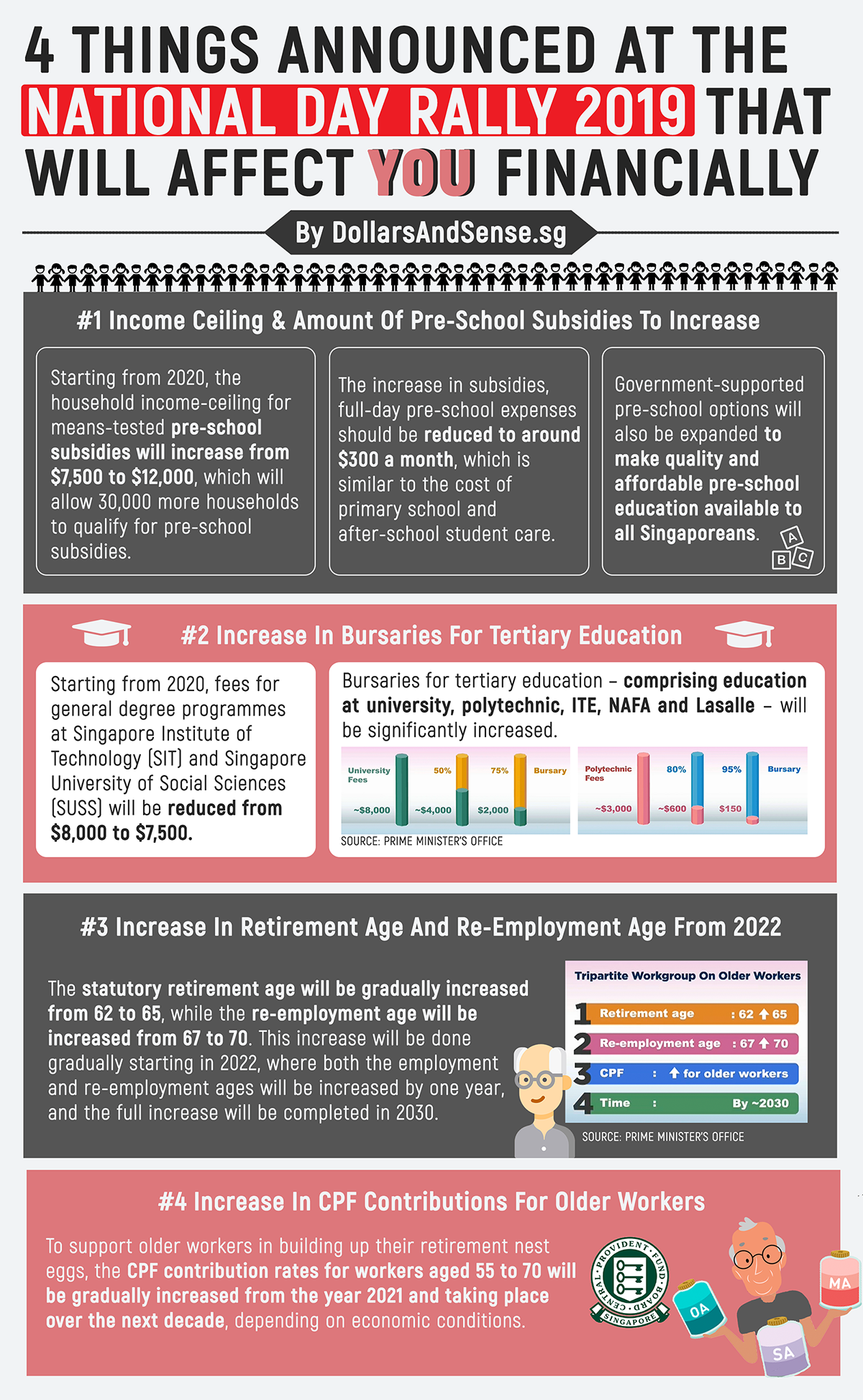 With that, let’s go into each of these announcements in greater detail.

#1 Income Ceiling And Amount Of Pre-School Subsidies To Increase 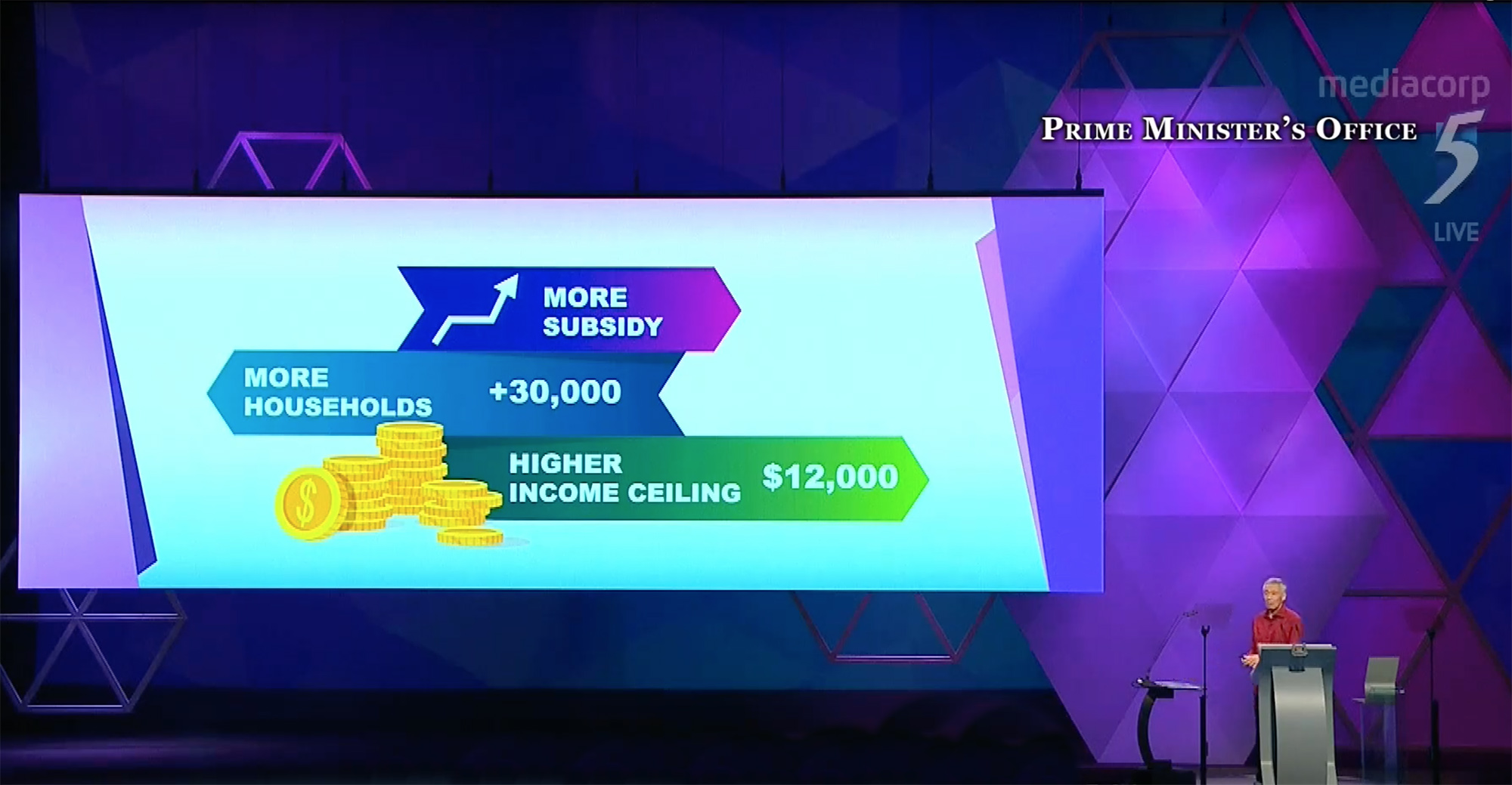 In the past, government support for education has been designed to begin at the Primary 1 level. However, research has shown the importance of the formative pre-school years, while MPs have also brought up concerns of Singaporeans over the cost of pre-school education.

In addition, the quantum for these pre-school subsidies will be increased across the board. While the exact details of the quantum increase have not been announced, PM Lee said that with the increase in subsidies, full-day pre-school expenses should be reduced to around $300 a month, which is similar to the cost of primary school and after-school student care.

In addition, PM Lee announced that government-supported pre-school options will be expanded to make quality and affordable pre-school education available to all Singaporeans. Today, about 50% of all pre-school places are government supported (via the MOE kindergartens and ECDA’s operator schemes). The aim is to eventually increase this figure to 80%.

#2 Increase In Bursaries For Tertiary Education

As a foundation of Singapore’s meritocratic system, PM Lee said that students must not be deterred from pursuing further education on the grounds of financial ability. Towards this end, PM Lee said that the government will continue to ensure that all Singaporeans can fulfil their educational aspirations.

Starting from next year, fees for general degree programmes at Singapore Institute of Technology (SIT) and Singapore University of Social Sciences (SUSS) will be reduced from $8,000 to $7,500.

Bursaries for tertiary education – comprising education at university, polytechnic, ITE, as well as NAFA and Lasalle – will be significantly increased.

PM Lee said 6 in 10 students are eligible for government bursaries, which means that many middle-income families would benefit from the expanded bursaries.

#3 Increase In Retirement Age And Re-Employment Age From 2022

As Singaporeans live longer and healthier, many Singaporeans wish to stay active in the workforce for longer. Thus, the Tripartite Workgroup on Older Workers was formed last year to study and make recommendations on how to best support older Singaporean workers’ aspirations.

As a major employer, the government will take the lead by voluntarily raising the retirement and re-employment a year ahead of schedule by 2021, and PM Lee encourages companies to follow suit if that are able to.

PM Lee emphasised that there are NO CHANGES to CPF withdrawal ages and policies.

Read Also: What Is The Difference Between Retirement Age And Re-Employment Age In Singapore?

To support older workers in building up their retirement nest eggs, the CPF contribution rates for workers aged 55 to 70 will be gradually increased from the year 2021 and taking place over the next decade, depending on economic conditions.

To help businesses adjust to these changes, a support package will be announced by DPM Heng Swee Keat at next year’s Budget.

PM Lee Hsien Loong’s National Day Rally 2019: Liveblog Updates And Commentary As They Happen
Here Are The Full 22 Proposed Changes Made By The Tripartite Workgroup On Older Workers That The Government Will Fully Implement