This week was a short one for stocks as well. In the coming weeks, our 4 Stocks This Week column will be kept full by companies’ results season, which are set to be announced in April.

If you come across interesting companies or ideas, do give us a shout out and let us know why you think they’re interesting via our Facebook page or email.

Globally, geopolitical uncertainties have played a role in the muted markets this week. This week, in America launched missile attacks and dropped its “mother of all bombs” in Syria as well as sailing its aircraft carrier and an accompanying fleet of warships to the Korean peninsula in response to North Korea’s nuclear and missile launch tests.

The result of this on global markets was reflected in the slight drop in the Morgan Stanley Capital International (MSCI) All Country World Index (AWCI), an index made up of 23 developed markets and 23 emerging markets worldwide, which ended the week at 444.36 on Friday (14 April 2017).

In Singapore, the Straits Times Index (STI) mimicked the weakness in global markets falling marginally to close at 3169.24 on Friday (14 April 2017).

The group has declared an interim dividend of $0.06, payable on 24 May 2017. This is $0.01 lower than its dividend for the corresponding period last year.

The media group has tightened its costs and are looking into new related businesses to diversify its growth. Earlier, in March 2017, SPH was awarded the rights to run two new radio stations – one is a finance literacy station and the other is aimed at Chinese seniors above the age of 50.

Also Read: Would Singaporeans Really Tune In To A Finance Related Radio Station 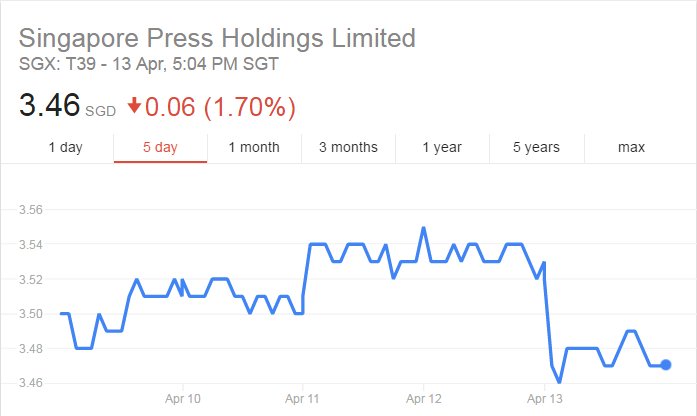 The first one was on Tuesday (11 April 2017) for the completion of aVance 4, a multi-tenanted IT building with total floor space of 390,000 sq ft in the Indian city of Hyderabad, for $42.2 million. The property is 80.4% leased out. This is also the fourth property it has acquired from the same vendor, after aVance 1, 2 and 3.

Also Read: 5 Things You Need To Know About Investing In REITs In Singapore

On Wednesday (12 April 2017) it also announced that it had signed a term sheet with Arshiya Limited for the proposed acquisition of operating warehouses of over 832,000 sq ft near Mumbai, India for up to $116 million.

Underscoring its investment merits, on a year-to-date basis, Real Estate Investment Trust (REITs) in Singapore has achieved over 9.4% gains. 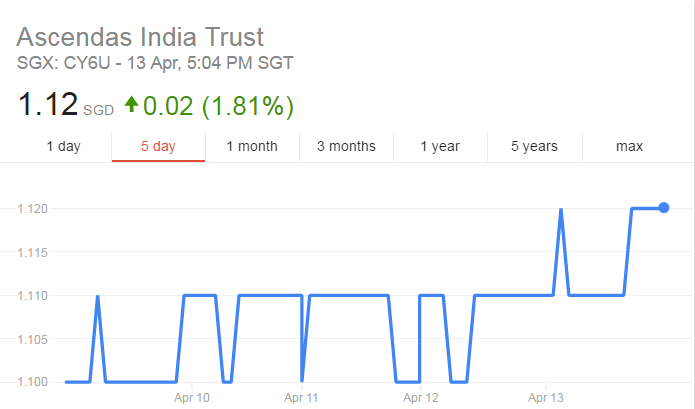 Oxley, a local property development and investment firm, announced that a 50%-owned joint venture company has entered into a sale and purchase agreement to acquire Flitous Properties Limited and Jemina Properties Limited from the Bank of Cyprus Public Company Limited for $41.7 million.

It also announced that one of its wholly owned subsidiaries has priced US$200 million notes, due 2021, at 6.375%. Proceeds from this bond issuance will be used for general corporate purposes, including refinancing borrowings, working capital and for capital expenditure of the group.

This week, Oxley’s share price has remained stable at $0.59. Its stock price had actually weakened during the week before rebounding after the announcement of its Cyprus property deals. Since the start of the year, Oxley has returned over 37.2%, and in the past year, it has delivered a return of more than 37.5%.

Also Read: What Happens To Your Money After You Sell Your Flat In Singapore 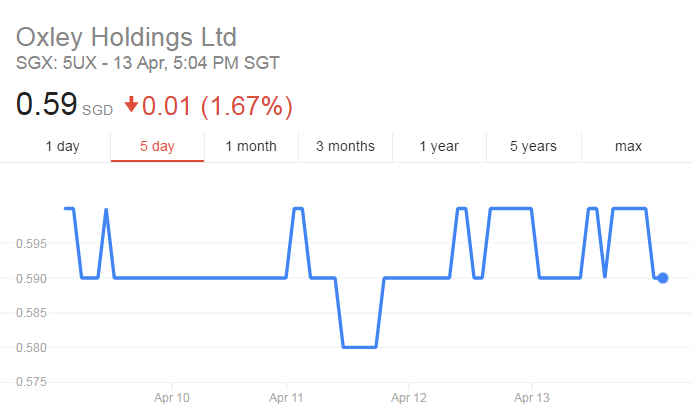 Container shipping trust, Rickmers Maritime, has decided to wind up and liquidate the trust. After months of negotiating a restructuring of its debt, it went forward with the decision after not being backed to secure support from investors.

Also Read: Swiber Holdings: What Investors Should Have Looked Out For (And The Lesson Learnt)

This represents another company in the tough marine and shipping industry to file for liquidation. In recent times, the industry has also claimed South Korea’s Hanjin Shipping Co and locally listed Swiber Holdings and Ausgroup Limited.

The trust is also in discussions to sell its assets, which may provide for cash recoveries for its creditors.