This S’porean Didn’t Allow Cerebral Palsy To Stop Him From Becoming An Athlete, International Speaker And His Own Boss

You have no reason not to push harder. 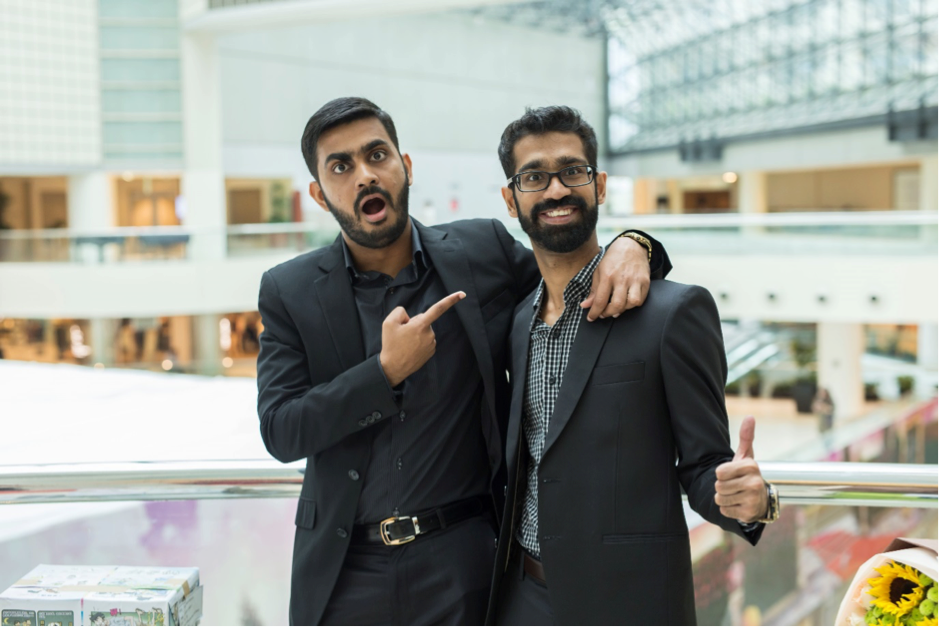 When Hitesh Ramchandani (pictured, right), 25, was born, doctors told his parents that he would likely not survive beyond 24 hours. Since then, he has been constantly defying the odds.

He was later diagnosed with cerebral palsy, a neurological disorder which affected his speech, muscle tone and motor skills, he was told he would not be able to walk on his own, but he proved doctors wrong. In school, no one wanted to pick him in their football teams because they were afraid he’d get hurt or slow them down. Determined to play, he trained hard and went on to represent Singapore, winning silver at the 2014 ASEAN Para Games, and bronze at the 2015 ASEAN Para Games.

Naturally, when it came to his career, Hitesh chose a path no one gave him a chance to succeed in – entrepreneurship.

We spoke to Hitesh to find out what drove him to want to succeed and start a business despite all the challenges and adversities he faced in life. We were truly motivated after speaking to him, and think his story can inspire Singaporeans to always reach for their aspirations no matter what people may say.

DollarsAndSense (DNS): Hi Hitesh, thank you for agreeing to do this interview with us and sharing your story with our readers. We have several questions which I think can inspire Singaporeans to fight and reach for their dreams. How did your condition affect you growing up?

Hitesh (H): Growing up with cerebral palsy, my muscular system did not develop normally. This affected my speech, movement and motor skills. I was not able to walk, but my dad worked with, pushed and encouraged me.

He never gave up no matter how frustratingly slow the process was. Eventually, my muscles started developing and my legs were slowly able to support my body.

I later learned that doctors had told my father that I would be better off moving around in a wheelchair. He had refused to accept that and insisted I became independent.

DNS: Can you share a low point in your life, and how you overcame this?

H: My lowest point had to be when I hit puberty. I became acutely conscious of how different I was compared to others – I realised I had a disability. Many of my classmates used to tease me because I spoke differently, walked differently and looked different.

I had an immense fear of public speaking, and I remember one occasion when I had to give a presentation. I was always afraid that people would laugh at the way I spoke and mock or judge me. Before this, whenever there were presentations at school, I used to take an MC. So, when I stood up in front of everyone that day, and just froze in front of them. My mind went blank, I just turned and ran out the door. In the hallway, I started to hyperventilate, choke and cough very badly.

This became my source of motivation. I always wanted to do and experience all the things my peers were but if I had fears, it would hold me back. I told myself, if I just faced my fears, it would already be a success regardless of the outcome.

My family and friends gave me a lot of much needed support and encouragement as well. They never treated me like I had a disability – perhaps, if they did, I would really think I have a disability and not do all the things I have done today.

DNS: How did you eventually decide to start your own business?

H: Funny enough, it was because of my fear of public speaking, I enrolled in Toastmasters to help me get past it. I started learning mental skills to manage my fear and continued practicing to improve my speech. I also got 1-on-1 coaching from Manoj Vasudevan, who has won many public speaking accolades.

As I started to speak in front of, first, 1 or 2, then 5, then 10 and then more strangers, I got better and less afraid. After a while, I found myself enjoying talking to people be it conversations or on a stage.

Eventually, I started getting invited to schools, organisations and companies to give talks to motivate people and tell them my story. Of course, by then I had played with the Singapore Paralympic Football team. I was also invited to speak at the JT Foxx Family First Reunion in 2015 and was pleasantly surprised to be voted the top speaker amongst 45 speakers from all around the world.

I decided to turn this passion, and something I really enjoyed doing, into a full-time career by setting up my motivational speaking and mindset coaching company, “Better Than Normal”.

DNS: What does your company aim to achieve?

H: One of my dreams is to make “Better Than Normal” a lifestyle. I feel many people accept the situation they are in. They settle for less instead of pushing themselves to achieve the best version of themselves.

They usually have good reasons why they can’t focus on themselves. Sometimes, what people in the society say, what they think their education level deserves or their own mindsets limits them from pushing themselves. Many are also comfortable with their current lives or bogged down to do anything differently. “Better Than Normal” aims to help them and train them to think and act in a different way.

“Better Than Normal” seeks to change the way people view their lives.

DNS: How easy or difficult was it to set up your own business and run the company?

H: I was actually in the first year of my Sports Science degree when I decided to embark on my entrepreneurship journey. I was killing myself trying to learn scientific terms and wasn’t enjoying it. That made starting the business a really simple choice.

I also had a good groundwork already laid for me. My book, also titled “Better Than Normal” was doing well and I was already getting invitations to give motivational talks. Most importantly, this was something I was good at and happy doing. Every time someone came up to me and tell me how they changed their lives, even in the smallest ways, because of what I was doing, I felt really happy to have made a difference.

I also invested in myself and my business and got coaching from JT Foxx and Christopher M Duncan. I strongly believe in the value of coaching, be it in personal or professional life.

I also believed it would be my best chance to work on something and be financially independent. I am sure that if I did what I enjoyed, they money would naturally come. If I went down a path of doing something I did not like, I may not continue with it.

While my parents were initially against this idea and thought I should focus on my studies, I fought for it. I told them to give me six months to prove to them I could do this. I also promised to go back to school if it failed, so I’m working doubly hard!

DNS: What drives you to continue doing things that you’re uncomfortable with or have never done?

H: It’s a way of life. It is the “Better Than Normal” mindset that I want to bring to people.

Even today, I constantly face rejection in my entrepreneurship journey and have fears. Sometimes, people reluctant to pay a speaking fee, thinking I am too young or inexperienced, they also choose to go with other speakers or other sorts of events fearing their participants may not understand me because of my speech disability, also, they may stereotype my experiences thinking it will not resonate in the corporate world.

I work through this, proving them wrong and showing them that I can do these things, and more.

DNS: What are your plans to grow “Better Than Normal”?

H: My dream is to inspire 50 million people by 2050 to become “Better Than Normal”. This is an ambitious target we have set and we are confident of reaching it even earlier!

Pushing To Be The Best Version Of Yourself

To achieve your aspirations is not easy. The people who you look up to or envy today did not have it easy getting to where they are. The proverbial blood, sweat and tears they put in to achieve what they did is never on display.

Depending on your particular situation in life, it may be extremely difficult to push yourself to do something new or better. However, as Hitesh has demonstrated all his life, if you push and fight hard enough, you have a chance to achieve your goal. If you do not even try, you will never achieve it.

Hitesh’s motivations came from people and society’s rejection. While this may not be applicable to everyone, you need to find your motivation.

Everyone has fear, the fear of losing what you have, the fear of failing if you try, the fear of being judged…the list is different for everyone. There’s no magic trick to getting past your fears. Hitesh knew his fear of public speaking was holding him back so he attended a course to help him get past his fears. It didn’t happen overnight either. He took small steps speaking to more people each time. At the same time, he also continued to practice improving his speech and articulation.

We Spoke To A Singaporean Who Was Retrenched After His Company Shifted Overseas, Only To End Up Working For Them In Canada
Disability In Singapore: Why I Left My Job To Be The Primary Caregiver For My Husband