Disability In Singapore: Why I Left My Job To Be The Primary Caregiver For My Husband

What is it like leaving your career to care for your husband? A Singaporean share with us her experience being a full-time caregiver. 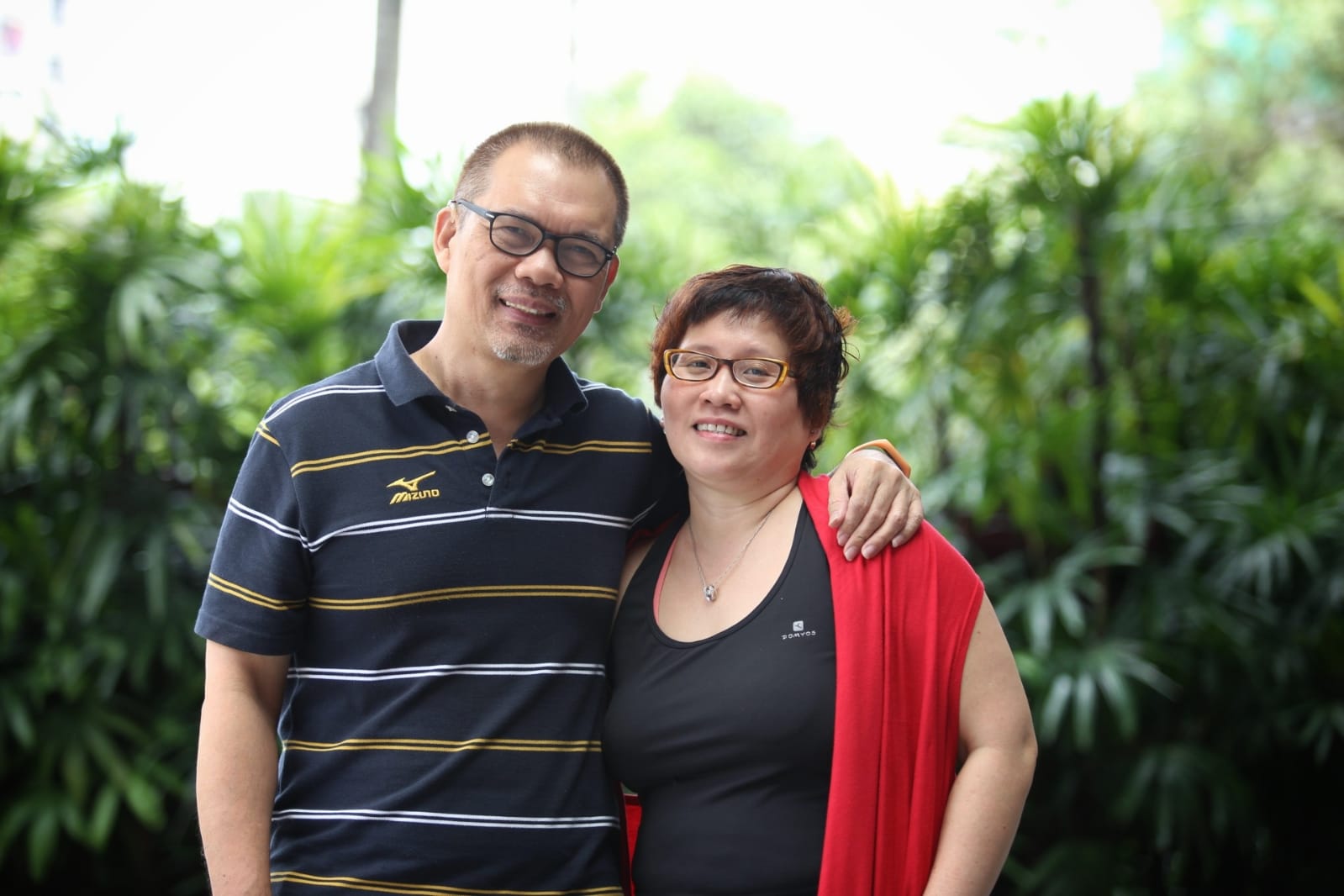 This article was written in partnership with the Ministry of Health. All views expressed in this article are the independent opinion of DollarsAndSense.sg, and the individuals that are featured.

In 2015, Cathie Chew and her husband were living the life they wanted. They had three children who were in their teens, and were working in fulfilling and well-paying jobs.

Cathie was a financial consultant with an extensive network of clients. Her husband, Sim Tharn Chun, was a regional country manager at an American MNC.

All that changed on, on 15 November 2015, when life took an unexpected turn for their family. Tharn Chun consumed raw-fish porridge – and was taken ill.

Some of you might be vaguely familiar with the raw fish saga back in 2015, which affected hundreds of people in Singapore. While most people recovered from this incident, Tharn Chun was not as fortunate. He was in a near-death experience, and was left with permanent hearing loss, which affected his speech, mobility and balance.

Cathie then made the tough decision to give up her career to take on the responsibility as primary caregiver for her husband. We spoke to Cathie about what led her to make her decision, as well as the financial and non-financial challenges that the family had to cope with ever since. Cathie and Tharn Chun at Woodlands Regional Library, a venue the couple enjoy frequenting due to its proximity to their home.

DollarsAndSense (DNS): Thanks Cathie for taking the time to chat with us today. Tharn Chun’s journey to recovery was long, complicated and not to mention expensive. Can you share with us the estimated costs that were incurred?

Cathie Chew (CC): It was not cheap. Without health insurance, we would not be able to afford it. In total, my husband was warded for more than 40 days over three separate admissions, so hospitalisation costs came up to about $170,000.

Even after he was discharged, we continued to incur post-hospitalisation costs for check-ups, physiotherapy sessions, tests and medications. This set us back another $20,000.

His MediShield Life and private integrated shield plans covered the bulk of his hospitalisation bills. We also received payouts from his critical illness, personal accident, disability and the dependants’ protection scheme plans. All these were lump-sum payouts to help with ongoing daily living requirements and medical treatments.

Today, it’s been close to three years since the incident, and we still incur ongoing monthly medical costs of about $300.

DNS: Your husband was not able to continue working due to his hearing loss. But why did you decide to leave your job as well?

CC: My husband needed dedicated support during his recovery. This left me with limited options: hiring a domestic worker or leaving my job.

Many people don’t realise the importance of emotional support that a person requires after going through a life-threatening ordeal. This is why I decided to take a sabbatical from work to care for him myself rather than relying on a domestic worker.

At that time, we thought his condition would be temporary, and we could all return to our jobs when things improved. It was only after some time that we learnt that his hearing loss was permanent, and that there may be other complications such as impaired mobility, balance and speech.

Realising he was going to lose his good health, bright career and social life hit him hard, and I didn’t want him to fall into a deeper depressive state. This was when I made the difficult decision to leave my job permanently to become my husband’s primary caregiver for the long-term.

Some days were harder than others, and I felt I was able to be his pillar of strength, “forcing” him to go on daily walks with me and encouraging him to speak to us normally, so that his speech would not deteriorate.

Read Also: How Does Your Day-To-Day Life Change When You’re Recovering From A Medical Condition? A Singaporean Shared With Us Her Experience

DNS: Both you and your husband left the workforce at the same time. How did your family managed to cope with the loss of your income?

CC: As a financial consultant, I was entrusted to take care of our household finances, including our insurance coverage. Thankfully, my husband had insurance and the payouts we received were sufficient for our family to continue living life without worrying too much about not working in the immediate future.

We also received payouts from his critical illness, personal accident, disability plans and the CPF dependants’ protection scheme. All these were lump-sum payouts.

Of course, we’ve had to adjust our spending habits and our budget well to ensure it lasts us for the rest of our lives.

There was still a lot of financial stress. What many people don’t realise is that you will still need to wait for a period of time before getting your insurance payouts. Before our first insurance benefit was paid out, we watched our savings slowly being depleted. Fortunately, we had built sufficient savings over the years to fall back on during the claims process.

DNS: You mentioned that beyond just the physical adjustments, your family had to adjust your spending habits and budgeting as well. What were some of these adjustments that you had to make?

CC: We embraced minimalist living! This included reducing the number of holidays we took, cooking at home on most days and giving up our car to embrace “BMW” (bus, MRT and walk) instead.

DNS: What are some of the initiatives that you were able to pursue, in spite of this incident?

CC: Making the difficult decision to end my career as a financial consultant lifted a stress on me. It gave me clarity to think about my new life ahead.

On a daily basis, I spend my mornings browsing through the Straits Times to keep myself abreast of the latest news and then spend some time on the Facebook groups that I am actively involved in. I also spend some time doing my own marketing and updating my website.

An innocent question from my daughter got me thinking about penning my experiences. I launched my first book in April 2017, and I have successfully launched three more books since.

Earlier this year, I was invited to share my story of thriving amidst life’s adversities at the first ever SkillsFuture Festival. That kick-started my series of public speaking engagements entitled “From Setback To Comeback”.

I have started including my husband as a guest speaker for some of these events. This has been well-received as participants could hear first-hand from him about his health struggles and career loss, as well as about the moments he felt down and how he kept himself positive.

I think it’s important to keep ourselves active and continue having goals, in spite of adversity. While our previous careers and lives have been left behind, we need to look towards the future – setting new goals to accomplish and having things to look forward to.

Read Also: This S’porean Didn’t Allow Cerebral Palsy To Stop Him From Becoming An Athlete, International Speaker And His Own Boss

DNS: The government has announced that CareShield Life is going to replace ElderShield. Do you think this is something your husband, and people like him, will benefit from?

CC: My husband has not made a claim on his ElderShield policy yet, and we are able to switch to CareShield Life in the future.

Because we were adequately covered by insurance, ElderShield was always going to serve as a cushion against severe disability, and the additional financial toll it would take on our family. As compared to ElderShield, we foresee CareShield’s lifetime payout as a better relieve for our long-term financial uncertainties. However, we will wait until 2021 before making a final decision.

Editor’s Note: Being Prepared For The Curve Balls Life Throws At You

When Tharn Chun fell ill, Cathie was primarily concerned about his health and helping him to get better. Once it was clear that her husband was never going to fully recover and continue working, and that she had to leave her job to care for him, her main worry shifted to their fast depleting savings. Her other concern was being able to afford his daily needs, especially in the possibility of severe disability.

They had always strived to live debt-free and had protected themselves with adequate insurance to not only pay for medical bills, but also providing them with payouts to continue their journey towards recovery.

Despite his hearing impairment, Tharn Chun remains physically abled, and can carry out most daily activities such as walking, feeding and dressing himself and have not made claims on his existing ElderShield plan.

(In Singapore, severe disability payout under ElderShield commences when a person is no longer able to perform 3 out of 6 Activities of Daily Living, or ADLs). 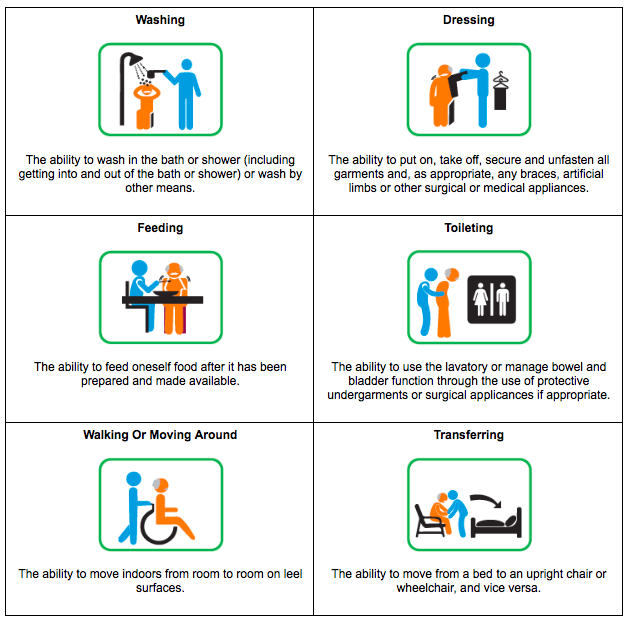 This S’porean Didn’t Allow Cerebral Palsy To Stop Him From Becoming An Athlete, International Speaker And His Own Boss
Living With Disabilities In Singapore: From Receiving Help, To Helping Others