The Joseph Cycle: Will The Stock Market Crash After 2022?

Here’s how a Singaporean investor has been using the Joseph Cycle concept to inform his investment decisions for decades. 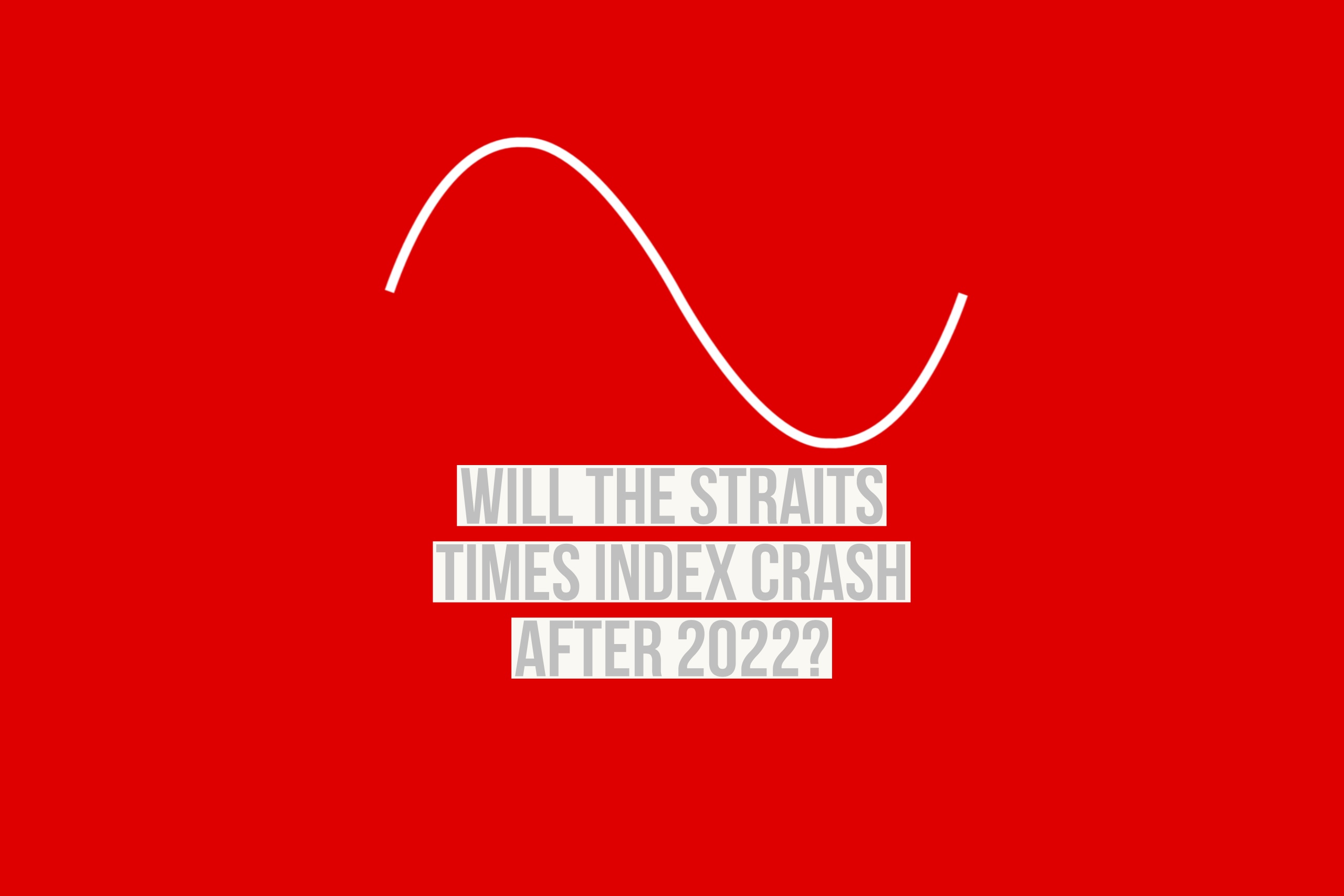 I made a lot of money over the last 10 years from the stock market with the knowledge of the Joseph Cycle and I would like to share with you the secret behind it. This ‘secret’ helped to predict general market movements in Singapore, and has revealed that the STI may crash after 2022.

In early 2007, I chanced upon an investment book, written an expert Technical Analyst from UBS, Simon Sim.  In his book, Sim described an observation that since 1981, The Straits Times Index (STI) followed a pattern of 7 years of upward trend (“7 Good Years“), followed by 7 years with a few massive downward swings (“7 Bad Years”). He called this trend, the “Joseph Cycle”.

More importantly, he predicted that 2008 would be the start of the next “7 Bad Years” cycle, a 7-year period where we will experience massive stock market crashes. The Joseph Cycle was named after the biblical story of an Egyptian Economic cycle predicted by Joseph, cupbearer to the Egyptian Pharaoh a few thousand years ago.

I followed his advice in the book, and surprisingly over the next 10 years, I profited handsomely from the book and have grown to be a fan of the Joseph Cycle concept. Here is how I did it. 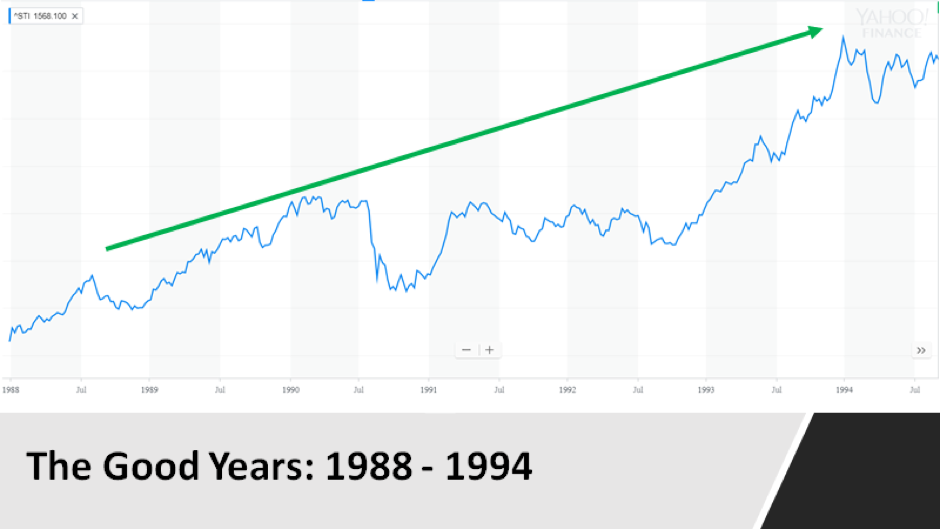 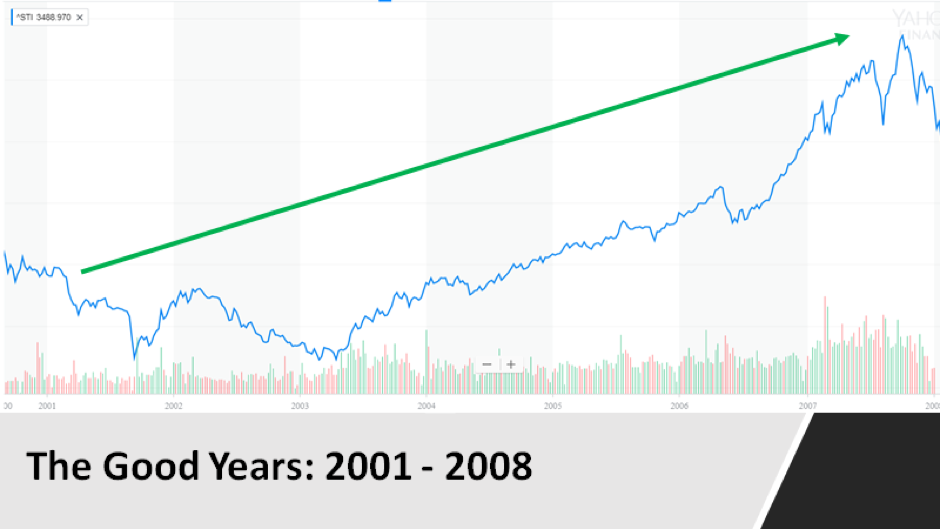 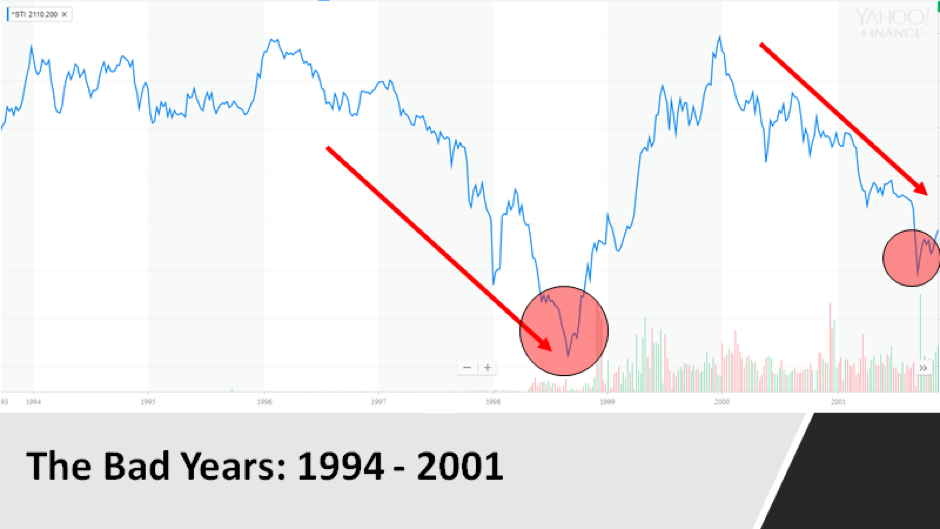 I Took My First Dive Into The Joseph Cycle

In late 2006, after I read this book, I was cognisant that the start of the “7 Bad Years” was approaching in 2008. Between 2001 to late 2007, the STI had already risen astronomically from a low of 1,241 points to 3,857 points. Therefore, it was very vulnerable to a market crash. I made a gutsy bet and liquidated much of my shareholdings by 2007. Thus began the wait, as I religiously saved much of my stock proceeds, salary and bonuses – waiting patiently for the market crash. And crash it did, in 2008. 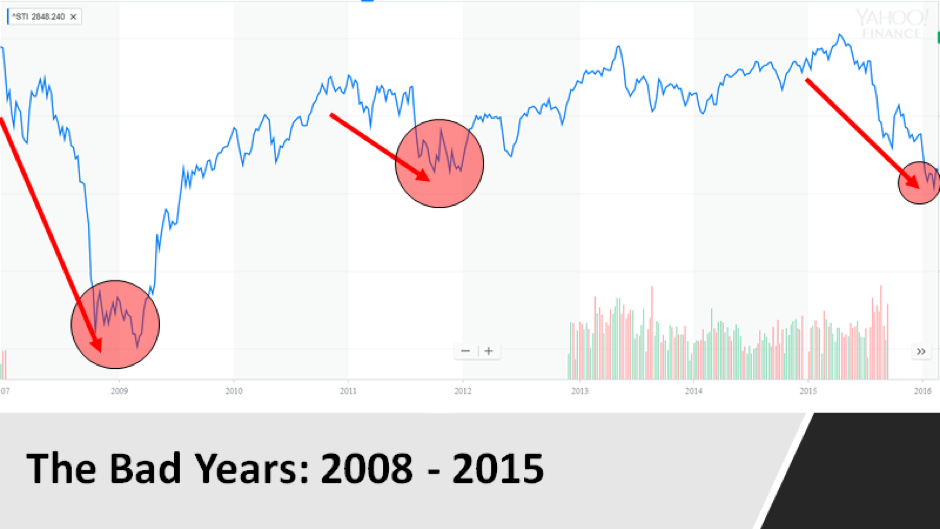 The Global Financial Crisis started in late 2007. It was a severe crash, from a historical high of 3,857 points, the STI crashed eventually to a low of 1,513 points. I began to invest heavily when the STI crashed past 1,900. Personally, it was very frightening to see the market crash daily as I poured in more and more funds, diminishing my investments significantly.  It is noteworthy that the safety net provided by my 1M65 savings in my CPF Special Account helped a lot to calm my nerves – preventing panic and allowing me to act rationally. After six harrowing months of market bottoming, the STI eventually rebounded.

The STI recovered to a high of 3,261 points in 2011, but news of several European countries (Greece, Portugal, Italy, Ireland etc) being mired in serious debt problems broke out. Globally, the financial markets panicked and began crashing again. The STI tailspinned and crashed to 2,640 points. This time, I was emboldened by my experience from the previous Global Financial Crisis in 2008 and I invested my entire savings into the stock market.  Like all market crashes, the STI eventually rebounded, to a high of 3,449 points in May 2013.

The China Stock Market Crash of 2015 led the global stock markets into a nosedive. The STI crashed from a high of 3,525 points to 2,793 points. Yet with the knowledge of the Joseph Cycle, I recognised that this might be the last lucrative opportunity in this “7 Bad Years” to make a decent return and I invested the largest amount ever into the stock market. The rest, of course, is history.

In Jan 2018, the STI crossed 3,600 points. If the Joseph Cycle prediction is correct, STI would continue a bullish trend till around 2022. Of course, there may be intermittent market shocks and swings (e.g. currently market is down due to the trade war between US and China), but the overall trend would likely still be at a strong upward trajectory for a few years. 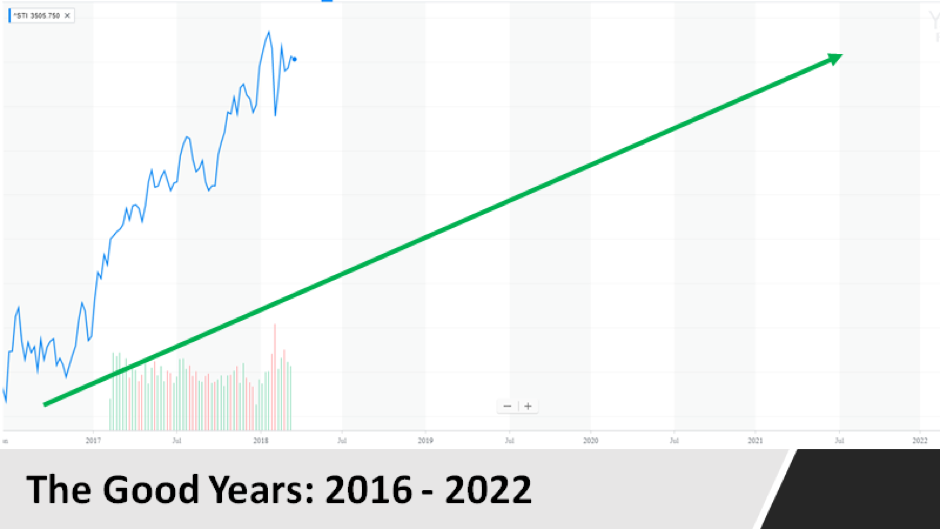 What Causes The Joseph Cycle?

The science of Technical Analysis and Investment Psychology are sophisticated and not easily explained in a short article. Economic cycles, market exuberance and stock market swings are heavily linked to human psychology of greed and fear, which I believe has a fixed time horizon.  While there are painful market crashes, investors’ memory would fade over time. Soon, greed will step in and wash away memories of the crashes, and will consume investors to drive the economy and stock markets into fragile bubbles. And the cycle repeats itself again and again.  Empirically, for Singapore, the time horizon for such a cycle is about 7 years.

How Am I Taking Advantage Of The Joseph Cycle Moving Forward?

The Joseph Cycle predicts that a bull run will likely continue for another 5 years (from 2018). For the next few years, I would take advantage of a global market recovery, accumulate more cash savings, while waiting patiently for a market crash in 2022/23. I generally don’t like to invest in Bull Markets, but there might be spurious market downswings that provide good buying opportunities in the next 5 years. However, I will likely not invest much. In 2021, I would start to liquidate my stocks and cash out, in anticipation of a major market crash. Thereafter, I will start buying on massive crashes again.

Read Also: Want To Know How This 16-Year Old Singaporean Student Stands To Make $30K From Working During Her School Holidays?

At the heart of it, the Joseph Cycle is really a guide that gives me the confidence to be a contrarian in the stock market, practising the mantra: “Be greedy when others are fearful and fearful when others are greedy.” (Warren Buffett).

Also, it guides me to be financially patient, taking investment strides in terms of years and decades, rather than risky speculative spurious short term buying and selling of equity. I have benefitted gratefully from the knowledge of the Joseph Cycle, and I hope that it would help you too in your financial endeavours.

Editor’s Note: If you like to find out more about the book, The Joseph Cycle, you can read this book review by our friends over at Dr Wealth.