The first project to be launched under the PLH model will be at Rochor, in the Central Area. Located along Kelantan Road and Weld Road. It will also include 40 units of public rental flats. 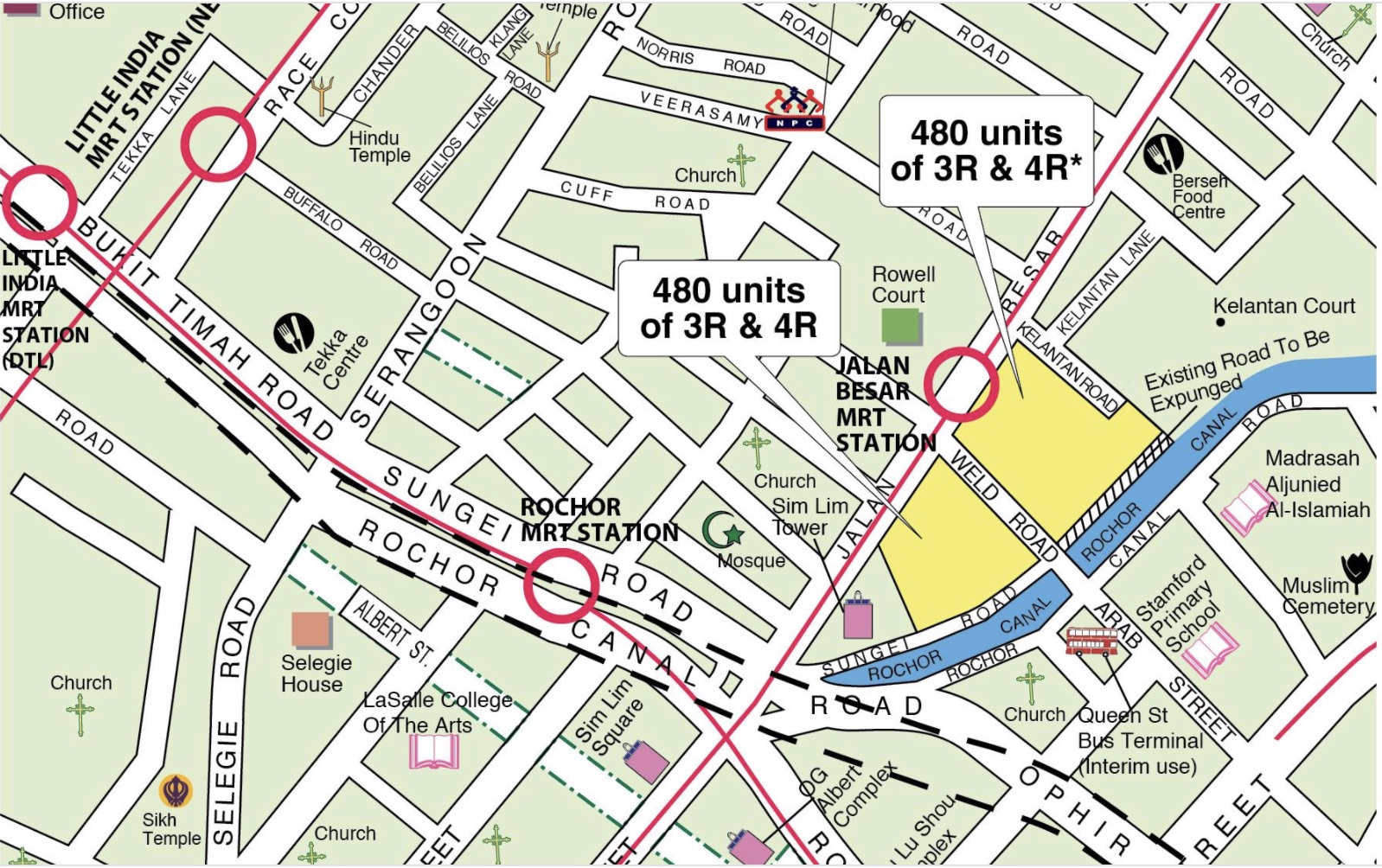 On 27 October 2021, the Ministry of National Development announced details of the Prime Location Public Housing (PLH) model. This new model provides a set of regulations that will apply to new HDB BTO flats to be built in prime locations, starting from the November 2021 BTO launch.

Under the PLH model, HDB flats built in central locations like the city centre and the Greater Southern Waterfront will fall under this definition of “Prime Location”.

Before going into the details of what the Prime Location Public Housing (PLH) model entails, we should understand the issues this model hopes to address. As many Singaporean home buyers would understand, existing HDB regulations enable a “lottery effect”, where buyers fortunate enough to secure a BTO flat in a great location (e.g. Greater Southern Waterfront) will stand to make a huge windfall upon selling their flat after MOP. This situation creates a tendency for potential home buyers to apply for HDB flats in prime locations, simply due to the logic that these flats are great investments if you are lucky enough to get them.

However, it’s hard to ignore reality. Flats in locations like Tanjong Pagar, Rochor, City Hall and the Greater Southern Waterfront are obviously going to be much more expensive compared to building flats in Tengah. Even if the cost of building the flats in these locations are about the same, we can’t (and should not) ignore the fact that these flats will be built on prime land that is worth much more.

To address these concerns, the Prime Location Public Housing (PLH) model has been introduced for new flats that will be built in prime locations. If you intend to apply for a flat in any future BTO launch that falls under the PLH model, here are 8 important things you need to know.

According to MND and as explained above in this article, new flats in prime locations naturally command higher market value and as such, would receive additional subsidies that are on top of the already substantial subsidies provided for BTO flats today. This is needed to keep such flat prices affordable for a wide range of Singaporeans.

To level the playing field with other BTO flats in non-prime locations, there will be a subsidy recovery that is applied to Prime Location Public Housing (PLH) flats upon the first sale of the flat. This means the buyer who bought it from HDB will need to pay a percentage of his selling price to HDB.

For the first PLH project at the Rochor estate. the Subsidy Recovery is fixed at 6%. This means if we assume a $1 million sale of the HDB flat in the future, $60,000 will need to be paid as subsidy recovery to HDB.

It’s vital to note that this is not a capital gain tax. The Subsidy Recovery is meant to recover the additional subsidies that these flats enjoy when it was first launched and would be paid on the sale price of the flat, and not on the capital gain. Also, it’s only payable upon the first sale and not on subsequent sales of the flat.

#2 The Subsidy Recovery Will Differ For Different PLH Projects

The Subsidy Recovery isn’t a fixed percentage and would differ between different Prime Location Public Housing (PLH) projects. This subsidy percentage would be made known prior to the launch of the PLH projects and would remain fixed for that project.

Thus, potential homebuyers for these PLH flats should check what the Subsidy Recovery would be for the development, before considering if they wish to apply for any PLH projects.

Unlike regular HDB flats that come with a MOP of 5 years, Prime Location Public Housing (PLH) flats will have a MOP of 10 years. This further stresses the fact that HDB flats are meant for Singaporeans with genuine housing needs and have strong owner-occupation intent when applying for this flat. The 10-year MOP needs to be met before the owner can sell it on the resale market.

For young couples intending to apply for PLH flats, the difference between 5 years and 10 years can be significant. Typically, couples with young kids tend to sell their flat upon the 5-year MOP and to move to a location that would be closer to their child’s future primary school.

With a 10-year MOP, it’s possible that a couple without kids currently, and who have a child born 2 years after getting their flat, would still be fulfilling their 10-year MOP by the time their child goes to Primary One. So this 10-year MOP is a consideration that young couples should not ignore.

Do note that the 10-year MOP is applicable as well to subsequent resale buyers of the PLH flats.

For Prime Location Public Housing (PLH) flats, renting out the whole flat will not be allowed, even after the MOP. This is in contrast to regular HDB flats where you can rent out your entire HDB flat after the 5-year MOP for rental income.

In other words, for anyone buying a PLH flat thinking they can rent it out after the 10-year MOP (and one can imagine rental in these areas would be good) and live in a private property, this dream will not be feasible.

#5 Stricter Eligibility Conditions Will Apply Even For Future Resale Buyers

As a deviation from the norm, there will also be a set of stricter eligibility criteria in place for future resale buyers of these Prime Location Public Housing (PLH) flats. According to MND, this is to ensure that PLH flats remain inclusive and accessible to a broad group of subsequent flat buyers over time, and not just the initial buyers. 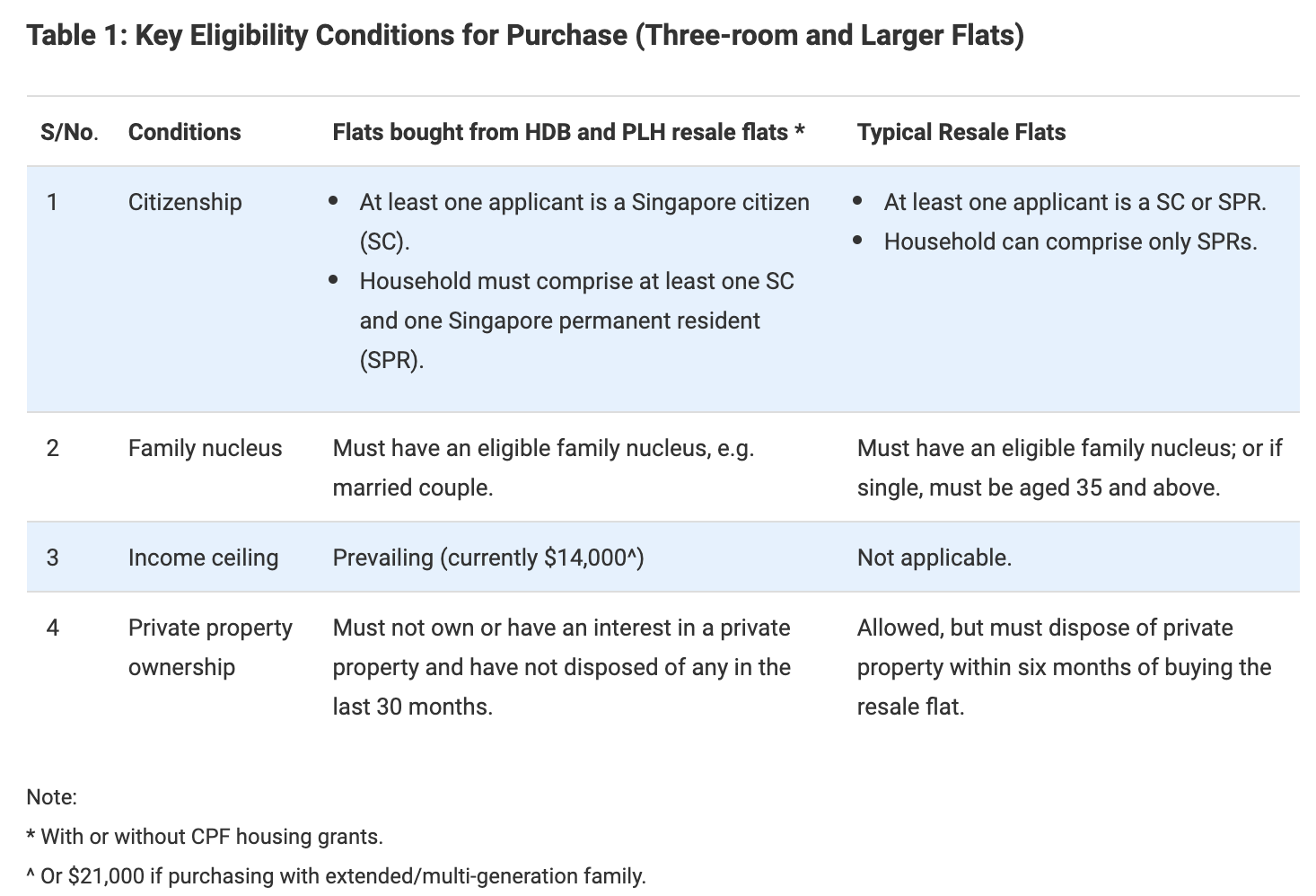 In other words, future buyers of these PLH flats are buyers who would also qualify to buy a BTO flat if they want, assuming they have not used up their two chances.

Alongside the fact that Subsidy Recovery would need to be paid by the initial buyer, and that the flat cannot be rented out completely even after MOP, this essentially curbs the potential upside of these PLH flats. While being situated in a prime location would mean there will always be strong demand for these flats, the fact that not all Singaporeans will be eligible to purchase the PLH flat in the resale market means the pool of potential buyers will shrink.

Also announced by MND is that public rental flats will also be built on these PLH sites, where feasible, for lower-income households. This is meant to ensure that public housing is kept inclusive and diverse across Singapore and HDB towns continue to be home to residents from all walks of life.

The first project to be launched under the PLH model will be at Rochor, in the Central Area. Located along Kelantan Road and Weld Road, 960 units of 3-room and 4-room flats will be offered for sale at the upcoming Nov 2021 BTO sales exercise. The pilot project will also include 40 units of 2-room rental flats.

Even as we digest through the various regulations in places for Prime Location Public Housing (PLH) flats, do note as well that all other HDB policies also remain in place for these PLH flats.

For example, the HDB Resale Levy is applicable for these flats. This means if first-time owners of a PLH flat were to sell their flat in the open market after the 10-year MOP, and buy another BTO flat from HDB as a second-timer, they will need to pay the Subsidy Recovery and the HDB Resale Levy.

Likewise, grants such as the Enhanced Housing Grant will also be applied to these flats should buyers qualify for them.

For the first PLH project at Rochor, the priority quotas for the flat allocation under the Married Child Priority Scheme (MCPS) will be reduced to two-thirds of the usual quotas. The MCPS quotas for these projects are up to 20% for first-timer families, and up to 2% for second-timer families. This allows public housing in prime central locations to be more inclusive, as it provides more opportunities to Singaporeans who do not have family members living near the area, to also live in these neighborhoods.

The primary aim of public housing in Singapore is to encourage homeownership among Singaporeans.

HDB, to its credit, has always built flats in locations all throughout Singapore, including prime central locations. Doing so is important for nation-building as it prevents gentrification – which is where a certain prime location ends up being just an estate that is exclusive to the rich.  By building HDB flats, including public rental flats, in such locations, the aim is to ensure that housing estates across Singapore will remain accessible for all to live in, and not just the wealthy.

With the Prime Location Public Housing (PLH) model, HDB can build more flats in these locations without the worry that the homes will be used as a tool for buyers looking to strike a windfall. By setting in place additional criteria and policies to govern these PLH flats, while giving substantial subsidies to reduce the price of what would be an otherwise expensive flat, HDB shift the purchase intent of these flats to favour owner-occupiers, as opposed to benefitting those looking at it from an investment or speculation point of view.

This article was first published on 28 October 2021 and has been updated with additional information on 18 November 2021.