How To Make Babies Millionaires In Singapore (Using CPF!)

Your child can be a CPF millionaire too 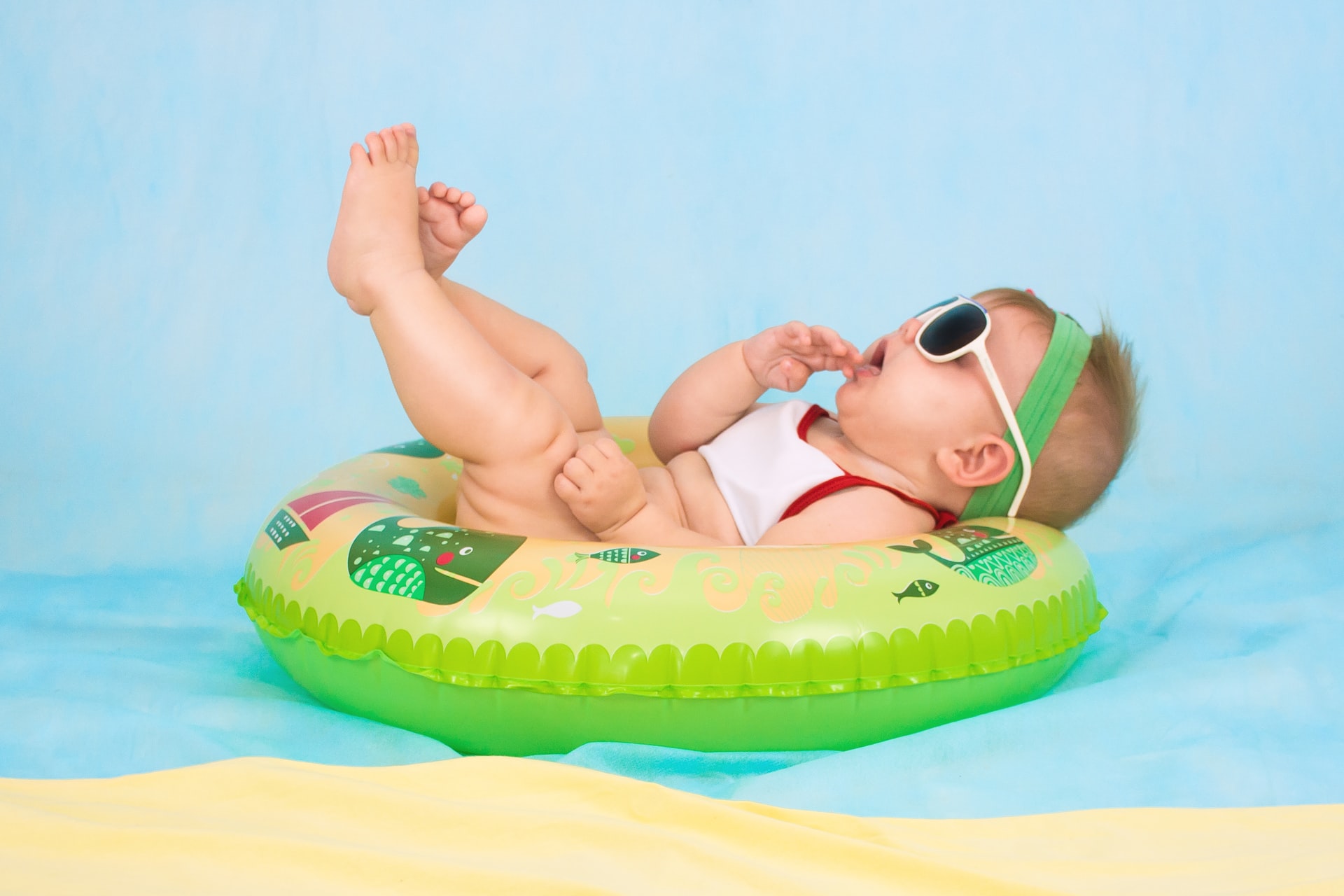 Recently, I was honored to be interviewed by Michelle Martin, MoneyFM 89.3 on “Becoming a Multi-Millionaire the Singapore Way”.  One of the ideas that I introduced “Make Baby Millionaires (MBM)” by topping up your child’s CPF Special Account (SA) generated a lot of interest on social media and online. To address the disbelief, controversy, and naysayers for this strategy, I thought it would be good to provide more details on this topic to allow for a better discussion.

Read Also: How You Can Make Your Child A CPF Millionaire By Contributing $400 Every Month Until They Turn 21

How Much Do We Need To Make Baby Millionaires?

To make baby millionaires, you first need quite a sum of money: S$64,350 to be exact for each baby at birth, to be contributed into their CPF SA.

Many Singaporean parents do not know that every Singaporean baby has a CPF account created for them at birth. The baby’s CPF account is set up as soon as the government credits the baby bonus into their baby bonus account.  This applies to Permanent Residents (PRs) and their children as well. The CPF Board will set up a CPF account for the children of PRs once their parents top up their CPF account

As parents, you should take advantage of this privilege to top up your baby’s CPF SA. Regardless of age, first S$60,000 in your child’s CPF SA would generate a whopping 5% return! If you let the power of compounding take its course and leave the SA balance untouched, the S$64,350 will compound to an astronomical S$1 million when your child retires 65 years later.

I have depicted the CPF SA growth path in the graph below: 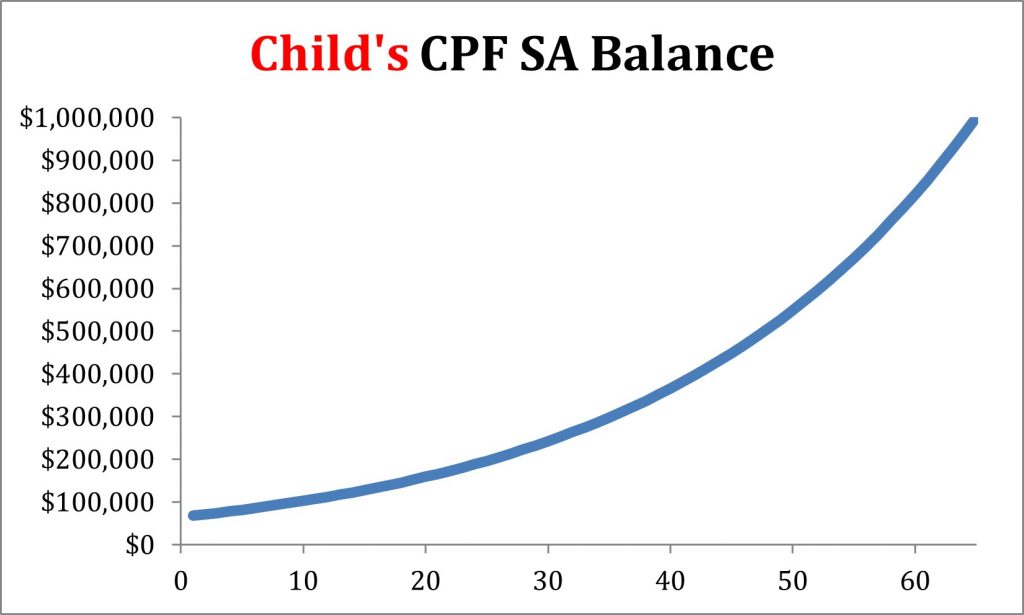 However, the probability of the parents or grandparents being able to do a one-time contribution of S$64,350 at the child’s birth is quite low. Instead, it may be more reasonable to assume a gradual annual top-up for the child.

To illustrate this, I have computed a few combinations of initial amount and annual top-up to make the child a millionaire.

That’s the power of compounding – the earlier we start compounding, the more it grows.

Parents and Grandparent Should Jointly Consider The MBM strategy

For young parents, topping up a sizable sum into the child’s SA would be very difficult, as their savings and income would be humble during the early stages of their career. Nevertheless, one should not downplay any amount of contribution, be it be $600 or $6000, or $64,350.  Frequent, bite-sized top-ups would all help the child reach a sizable retirement fund.

Traditionally, we think it would be the parents’ responsibility to help the kids financially.  Surprisingly, I have encountered many grandparents who thought that MBM is a great strategy for them to pass their inheritance to their grandchildren. Asian grandparents typically have more savings than young parents, accumulated through their years of savings.

With the MBM strategy, the grandparents need not give too much to their grandchildren and yet the grandchildren’s CPF SA balance will grow powerfully over 65 years. More importantly, their legacy will stay with their grandchildren for life as they see their CPF SA compounding powerfully over their lifetime.  Unlike giving a sizeable cash inheritance, the MBM strategy does not take away the incentive for the child to work hard for their living, as the child cannot touch and squander away their CPF SA monies easily.

Read Also: Estate Settlement In Singapore For Your Deceased Loved Ones: Here’s What You Need To Do After The Funeral

Key Assumptions And Risks of MBM

The biggest risks of MBM are policy or political changes and its illiquidity. 65 years is a long time to assume that policies or Government will not change adversely against the MBM.  I do not disagree. Historically, CPF policies and interest rates do change and notably, withdrawals are becoming increasingly difficult over the decades due to the increasing Full Retirement Sum.

Yet, no investment in the world that is without any form of risk. When we evaluate the risk of the MBM strategy, it should be against other plausible long-term strategies, e.g. buying stocks, properties or simply putting money in the bank.  Most stocks and properties are out of the legal reach of children and they carry a much higher investment risk than the CPF.  Meanwhile, inflation will erode the value of our bank deposits (and its low savings interest rate) over time.

The MBM strategy also assumes that the child does not meet unforeseen events like early death. Additionally, when the child grows up, it would be fair to assume that he or she will work and earn a salary, hopefully in Singapore.  This would contribute further to their CPF account and compound even more.  By the time they retire at 65, it would be a very sizable sum of savings for retirement, far more than S$1 million.

Regardless of whether we make our children millionaires through CPF, I feel that children should also be taught from young to top up their personal CPF SA. Regardless of how insignificant the amount, children should apportion some of their annual “angpow” money or savings from their allowances to their own CPF SA.  Inculcating these habits will teach them the need to prepare for their retirement way early and the importance of harnessing the power of compounding.  Financial literacy is best learnt when young and by cultivating the right financial habits.

Read Also: Pandemic Of CPF Illiteracy: The Reason Why Singaporeans Miss Out On A Million Dollar Retirement

I recognize that MBM, like most of the CPF investment strategies (e.g. 1M65/4M65), is very controversial, given some of the undercurrents in our society towards the CPF policies.  Instead of lamenting about it, I have chosen to harness the characteristics of these policies into fruitful long-term investment strategies that would make not just myself rich, but also that of my children and one day their children to become well-to-do also.  I urge everyone not to miss out on these powerful investment tools and harness them as early as you can.

I have also posted up the MBM spreadsheet, which details the computations of MBM strategy, in our 1M65 Telegram Group and Discord Group for anyone to download and review. Please join us there and pick up interesting CPF hacks from our panel of community experts.  You can watch the extract of the MoneyFM 89.3 interview with me on MBM here:

Loo Cheng Chuan, is the Founder of the 1M65 Movement. He developed the 1M65 ($1 Million By 65 Years Old) CPF investment strategy that is helping many Singaporean couples to become millionaires at retirement. He was one of the few non-civil servants to be awarded the Public Sector Transformation award in 2018 for his 1M65 efforts. He runs a 1M65 Telegram Group where he regularly coaches passionate 1M65 enthusiasts on good personal finance virtues.

Why Do Many Singaporeans Perform Poorly Investing In The Stock Market?

How Much Cash You Can Withdraw In Lump Sum From Your CPF Account At Age 65?
CPF Top-Ups VS SRS Top-Ups: Which Should You Choose?