Ever wonder what would happen if the financial markets went for a Halloween party? 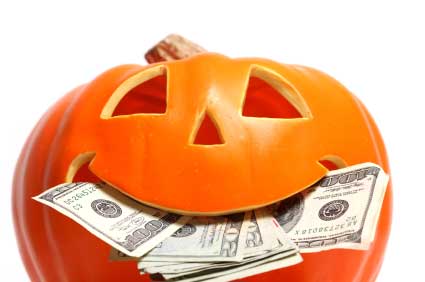 In this light-hearted article, DollarsAndSense decides to go trick-or-treating with finance and we look at some costume ideas.

Usually thought of as reanimated corpses, through witchcraft or the infection of an unknown virus, hell-bent on wrecking havoc on human civilisation.

Zombie firm is a term used in financial markets to describe companies which are operating near bankruptcy, and like reanimated corpses, they have life spans which can end rather abruptly. These companies are usually insolvent and involved in high risk projects associated with high running costs.

Examples of such firms are research and development companies where the invention of a new effective medicine or product will allow the company to make profits. However, if the project is not successful, the firm will have to close down.

Given the success rates of Zombie firms, it is recommended only for investors with high risk tolerance seeking for the next “ Apple Inc.” Trick-or-treat anyone?

Witches have been plaguing young children’s dreams for the longest time. Dorothy had several to contend with as she tried to find her way home; Macbeth died fulfilling the three witches’ prophecies and Roald Dahl wrote a book with that as the title.

Referring to the last hour of stocks trading, this term is usually used in the context of “triple witching” which is the third Friday of every quarter of the year where stock options, stock market index futures and stock market index options expires. Witching hour is usually characterised by high volatility as positions are closed in anticipation of its expiration date.

October, the month Halloween falls in is a fearful period for those planning for a Spooktacular experience at Universal Studios Singapore. Coincidentally, October gets some investors really nervy too.

The October effect is a theory where stock prices tend to fall in the month of October. This is believed to be a psychological expectation as most statistics have already gone against the “ October Effect” theory. However, looking back at history, some of the greatest crashes in the stock market had fallen in the month of October.

We don’t feel the need to explain why “Black” goes with Halloween. This group costume idea is great for picking up geeky girls for an easy photo opportunity.

“Black Tuesday” refers to the crash of Wall Street in late October 1929 which resulted in the Great Depression. Black Tuesday indirectly caused the unemployment of close to 13 million people and about 5,000 banks to go out of business, pushing the American banking system to the brink of collapse. Pretty scary if you ask us.

“Black Monday” took place on 19 October 1987 when the Dow Jones Industrial Average dropped more than 20% in a single day. Surprisingly, there was no announcement of any major news over the weekend which might have led to the drop.

“Black Wednesday” refers to the day Britian went over the edge after George Soros had bet against the British Pounds, short selling it to make over £1 billion and spent over £27 billion propping up the pound.

A “Black Swan” (for the girl in the Group) event is said to have occurred when an event significantly deviating from expectations. So it can be said “Black Monday”, “Black Tuesday” and “Black Wednesday” all did “Black Swan”. I just hope this doesn’t cause any confusion when the group picture is taken…

With the swing of its claws, this fearsome creature can rip apart the human flesh and turn it into shreds.

Not so different from its literal term, a “Bear” market is able to rip human lives to shreds. This event usually follows pessimism in the general economic condition and investors lose appetite for the stock market. There’s no definite figure but for many, a bear market is said to have occurred when the market plunges approximately 20% in a prolonged period.

In conclusion, some of the terms stated above can be interesting but its financial effects are very real. Like the cheap scares you received during your visit to ‘Spooktacular’ or any haunted houses this Halloween weekend, financial crises may scare you when you are caught off guard. This “scare” from financial crises may have a lasting effect spanning several years. As scary as it may sound though, individuals can actually take measures against such events.