Date nights should not be boring. 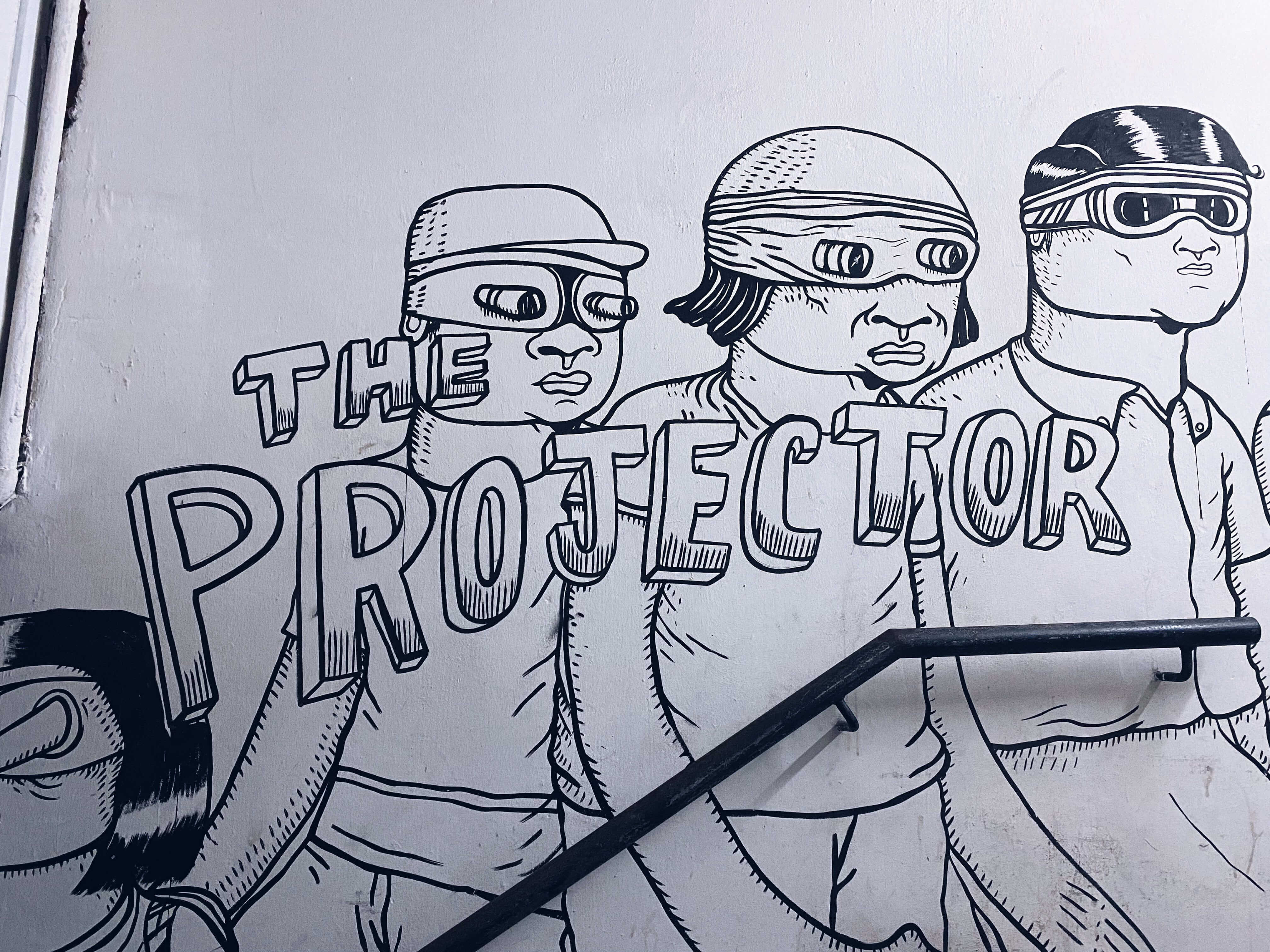 Going to the movies has always been a tried and tested date activity in Singapore. After all, you can’t go too wrong choosing a movie date for date night. However, if a regular movie date is too ho-hum for you, consider going on a movie date at an alternative movie venue.

Aside from the usual mainstream cinema operators in Singapore (Golden Village, Cathay and Shaw), there are also niche movie theatres in Singapore. The Projector is one such venue, oozing with the appeal of yesteryear and where my partner and I decided for our movie date. 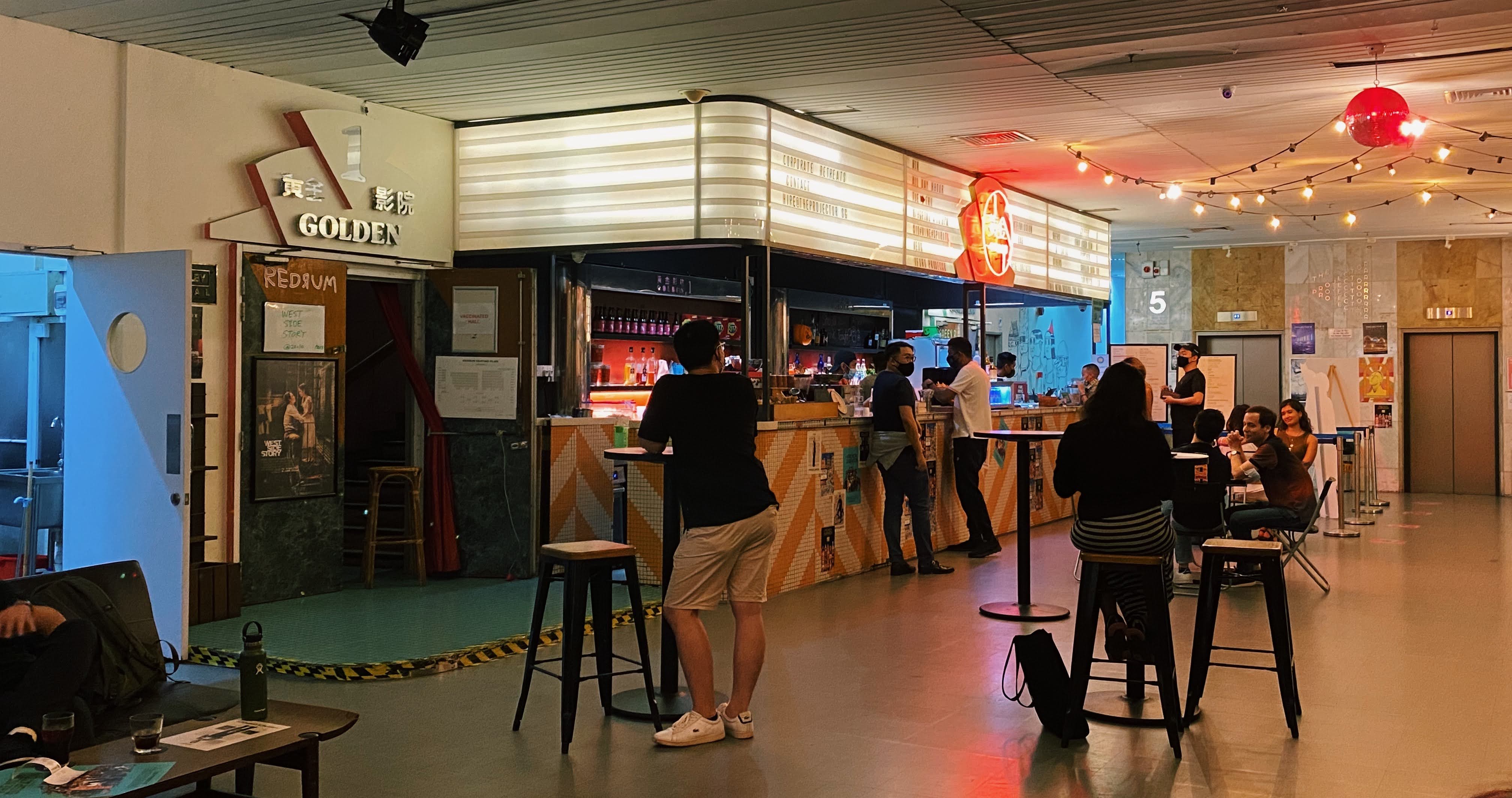 Unlike most movie theatres, The Projector showcases films outside of Hollywood and Asian cinema. Their selection includes French films, Documentaries, Cult classics, LIVE shows and so on.

With the choice of movie settled, we headed to The Projector. Situated in an unlikely and subtle location at Golden Mile Tower, it was generally accessible and a short walk from the nearest MRT, Nicoll Highway. 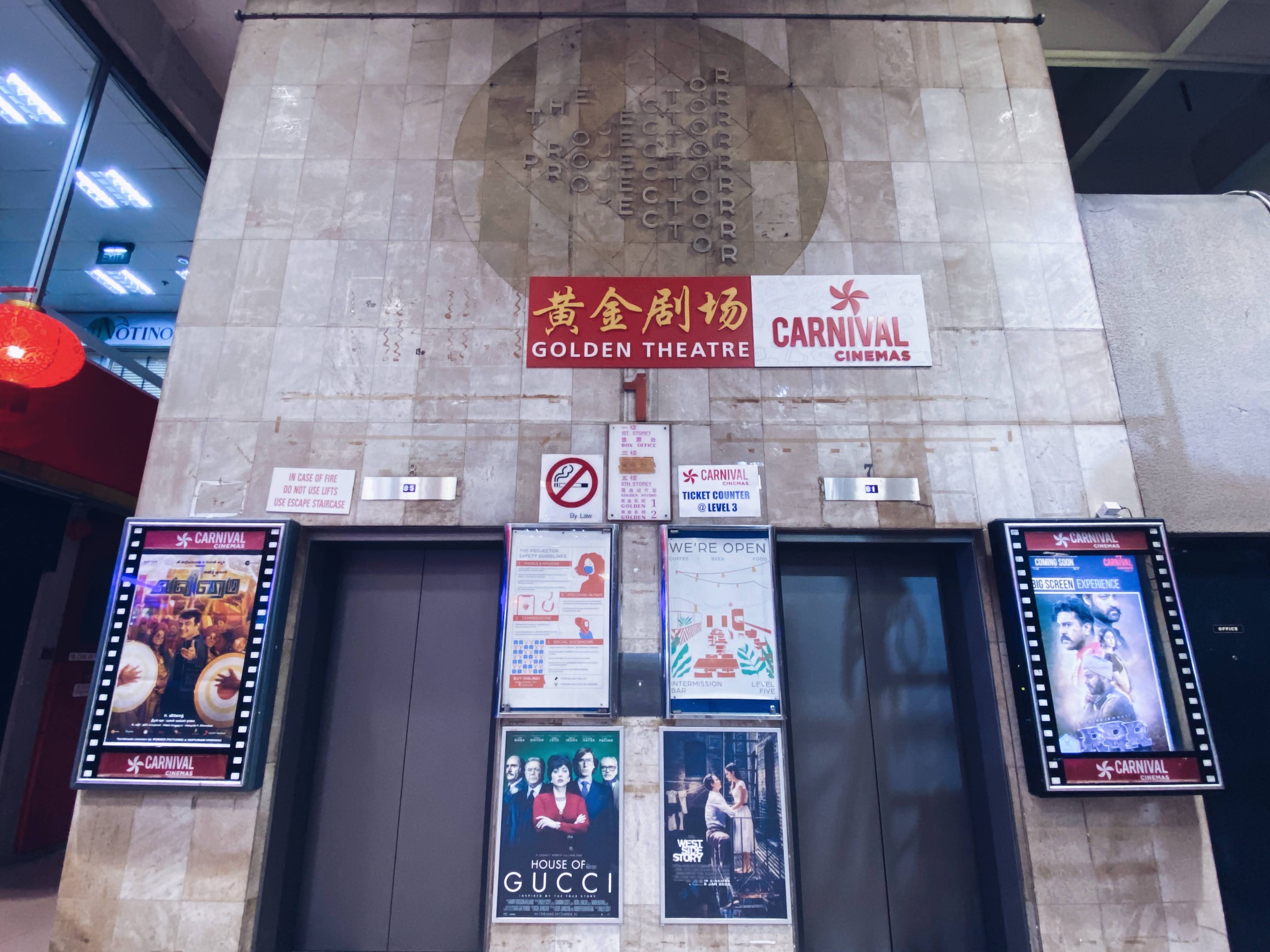 The Lift We Took Coming Up To The Projector

With its unique and vibrant appearance from the usual clean and sleek cinematic experience, The Projector is like a breath of fresh air. Conventional cinemas rarely have an area for people to chill and grab a bite while waiting for their movie. However, The Projector has an intermission bar foyer where you can do just that, giving you a good reason to reach early for your date – and to spend a little extra time with your partner before the movie starts.

With the bright red neon sign right above the intermission bar, it felt as if I was walking in to a 90’s themed diner. The intermission bar foyer had a warm tone of lights along with the soft beat music which created a lively atmosphere with bustling conversations in the background. Its carnivalesque aesthetic acts as a great conversation starter between you and your partner. 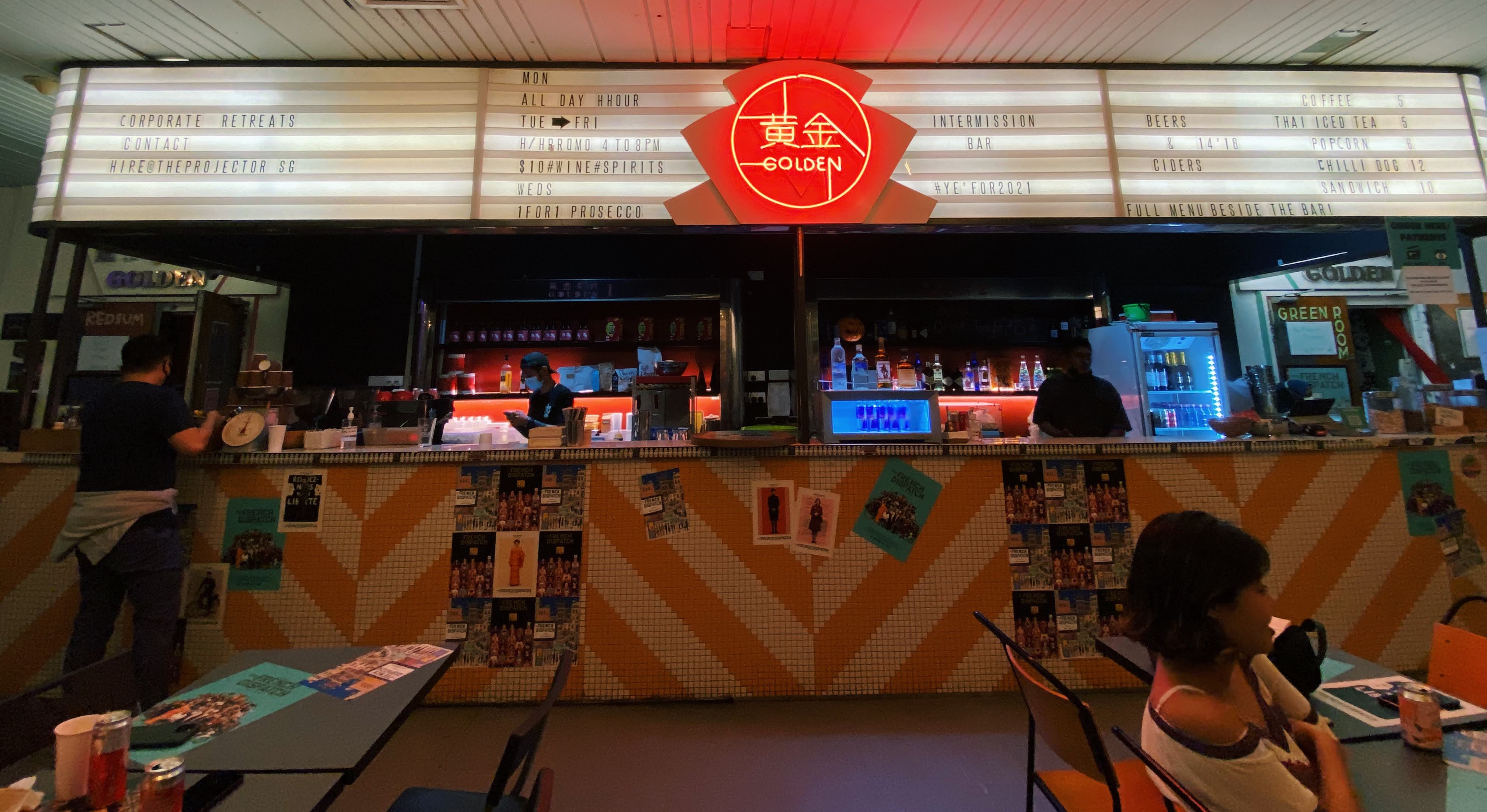 From finger food, grilled sandwiches, craft beers to even cocktails, The Projector serves a variety of food at its intermission bar. With its extensive menu, you’d be able to grab a meal right before your movie. This is ideal especially if you’re coming to catch a movie right after work or school.

Apart from LIVE shows, food and beverages purchased at the intermission bar can also be consumed in the theatres. This makes it perfect for you to bring food into the theatres without having to sneak it in at all, which was exactly what we did.

Unlike the standard sweet and salted popcorn or cheesy nachos with soda, we ordered the Chilli Cheese Fries ($13), Ghibli Cocktail ($15) and a Grilled Chipotle Pepper Chicken Sandwich with Fries ($14). Enough to keep us stuffed till after the movie which was perfect for us as we didn’t have time beforehand to grab a bite. It was also a bonus because we were able to enjoy the mouth-watering meal alongside our movie. 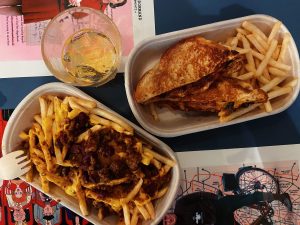 The Food We Ordered 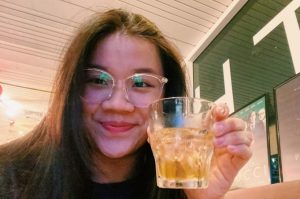 My First Time Drinking A Cocktail In A Cinema

Despite the vintage and old school outlook, the process of ticket collection was digitalised. As I purchased our tickets online, all we had to do was show our e-tickets, as well as our student passes before entering the theatre, making it a rather smooth process other than the fact that we had our hands full juggling our food and drinks. 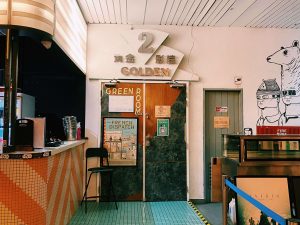 To my surprise, the only empty seats in the theatre hall for our movie screening were the seats meant for social distancing. The Projector also allowed for groups of up to five to watch a movie together – meaning no empty seats between you and your friends.

Instead of the regular 10 minutes of advertisements, The Projector plays mellow upbeat music that accompanies a slideshow. This was followed by movie trailers of current or future movies screenings at The Projector which makes the experience less commercialised. 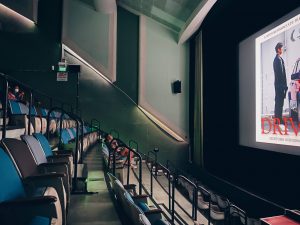 As retro and as rickety looking as the seats looked, they were actually quite cosy, and I didn’t feel fidgety at all during the entire screening. Even though we purchased second row tickets, there was still a comfortable viewing distance between our seats and the screen. Legroom was adequate as well, so you don’t have to worry about squeezing your way through if you need to use the washroom. 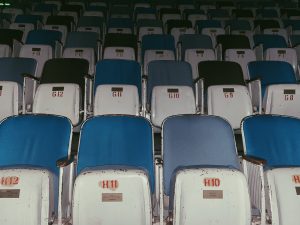 The Projector also has an option for movies on demand which allows you to rent a movie and watch it at home. What better way to watch a movie, than to snuggle up in bed with your blanket embracing you. For example, the movie “Bye Bye Morons’ which is a Projector exclusive movie available for rent. 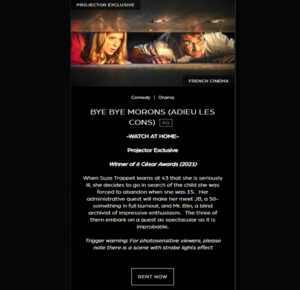 From the almost exclusive selection of movies, the variety of food and beverages served, to the eye-catching decor, The Projector is a far cry from heading to your regular cinemas. While you’d be paying a higher price, it may be well worth the experience. For us, the tickets cost $13 each for a weekend student pricing.

The Projector is also an active supporter of the local art scene. Though the ticket prices are slightly more expensive compared to a regular theatre, it’s a small price to pay in helping to support the art scene in Singapore.

For instance, during the Singapore Art Week (SAW), The Projector would be screening films which will only be shown during SAW. They also have an upcoming complimentary exhibition featuring art installations in correlation with SAW. For those of us racking our brains for a conversation starter with your date, The Projector’s unique selection of movies, attention to detail and aesthetics could be a great first date option. For the rest of us going with our regular dates or friends, The Projector is a great alternative to change up from our usual hang-outs.