DollarsAndSense Experiences: No Passport Needed To Travel Around The World In 80 Days With AndSoForth

London, Egypt, India, Hong Kong and Japan all in one seating 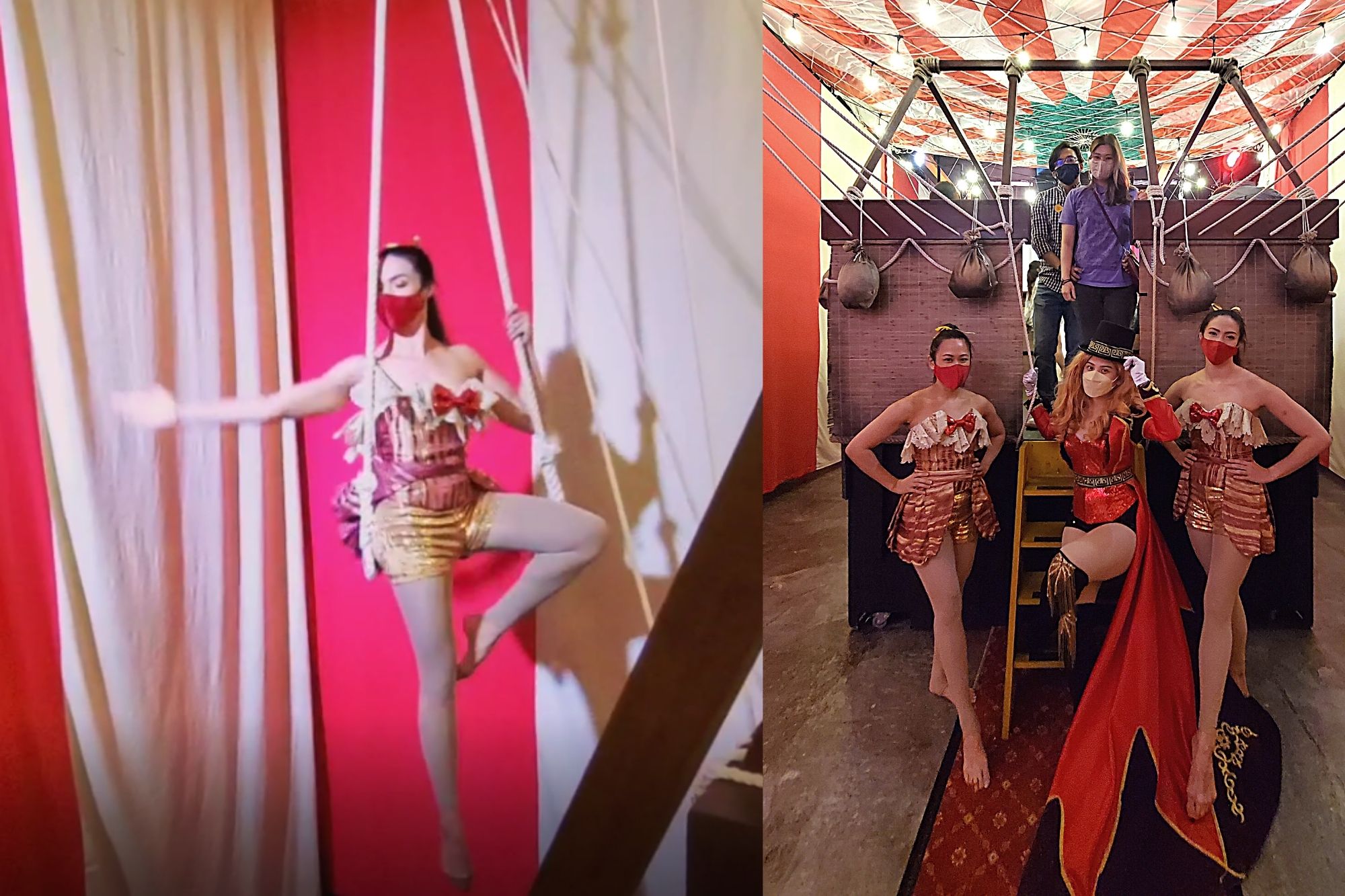 Vacationing overseas was a favourite end-of-year holiday activity of many Singaporeans, pre-pandemic. Some families take the opportunity of the long school holidays to bring their children overseas for a break and recharge before starting a new year and a new semester. Some just travel to clear leave and take a break away from work.

But even as Singapore opens its borders with (Vaccinated Travel Lane) VTL arrangements with other countries, many may still be hesitant to travel given the pandemic situation now.

Enter AndSoForth’s Around The World In 80 Days theatrical dinner experience. For those itching with the travel bug, “travel” safely with this 2.5 hour book analysis workshop as they recreate the literary journey that the protagonist, Phileas Fogg took to win a bet of £20,000 (or the equivalent of about S$2.7 milion). AndSoForthis known for their immersive dining shows. The concept of each show is designed with astonishing details to the props, décor, costumes and even the food will match the theme. For the duration of the dinner, audience will feel transported, leaving their earthly worries behind as they enjoy the entertainment and surprises.

Birthday Gift For My Husband

As I had gone for one of AndSoForth’s Christmas’ themed experiences a couple years ago, I knew just exactly how mind-blowing this immersive multi-room dining experience is. It is also pretty genius and apt of them to design an activity that lets us “travel” without leaving Singapore during a time when we were all in semi lock-down and borders were closed.

And seeing how my husband is a deputy editor, a book analysis workshop would be right up his alley.

The booking slots were limited due to COVID-19 restrictions, and the next earliest available slot we could book was in 1.5 months at the last timing slot – 9pm. The location is also kept secret until 24hrs before the workshop, so there was quite a bit of suspense build up over the 1.5 months wait.

Secrecy And Suspense Is Part Of The Experience

A notification is sent to us only 1 day before the workshop, revealing the address, along with other details such as the option to dress up to the theme of 19th century and COVID-19 safety measures. Even after arriving at the location, the entrance is inconspicuous, and you’d have to look out for signs and direction that will lead you to the entryway.

Greeting us at the entryway was a facilitator decked out in full costume and ready in character. Leading us through to the first out of seven scenic rooms recreated and inspired by the novel. 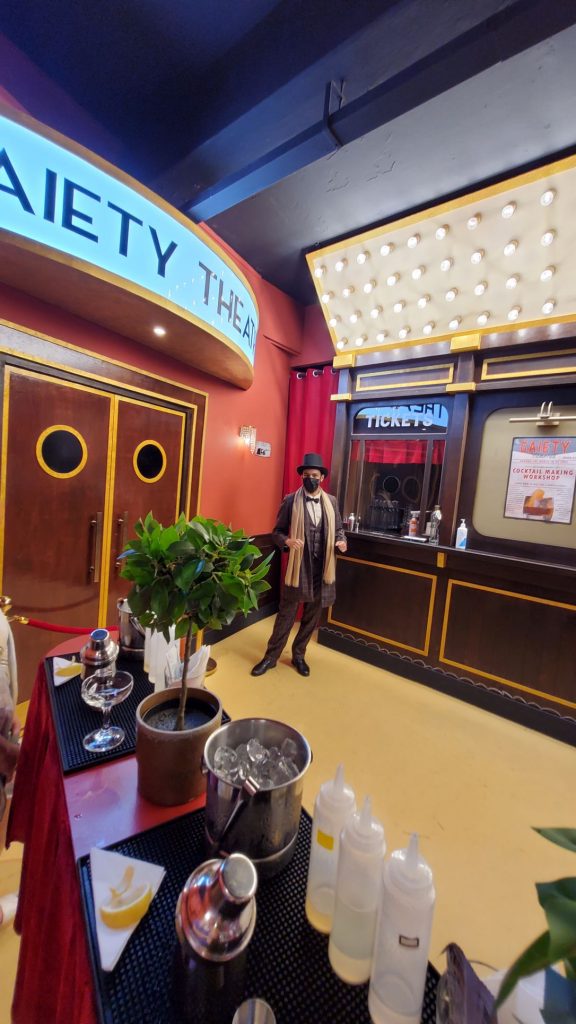 What better way to loosen and warm up the crowd than feeding us alcohol? Having us make our own cocktail and mocktail, of course!

Set in the Gaiety Theatre Box office in London, in the first room, we concocted a beverage according to our alcoholic preferences. We were taught how to measure liquids using a jigger and the expert way to shake a martini shaker. You could opt for a non-alcoholic drink and still experience the full range of the activity, too.

Doubling up as performer and instructor, the character who taught us how to mix our drinks dressed like Sherlock Holmes from the 19th century – he wore a top hat, a bowtie and a shawl draped on his shoulders. It was era-appropriate, and we were thoroughly impressed with the details, décor and props used to recreate this room.

A few sips of our own-made drink and we were quickly transported, figuratively and literally, to Egypt, the Suez in the next room.

We quickly found ourselves in a nautical-themed room, matching the storyline of the novel, The first transport mode that Fogg and his French valet, Passpartout, took was a steamer called The Mongolia.

For this activity, we each had a piece of rope, and carefully followed step-by-step instructions on how to make a handcuff knot and a bowline knot. Both my husband and I struggled to get the knots right, but somehow managed to nail the handcuff knot correctly *winks.

Read Also: Have Excess KrisFlyer Miles But Not Keen To Travel Overseas? Here Are 5 KrisFlyer Experiences That You Can Redeem Your Miles For Instead 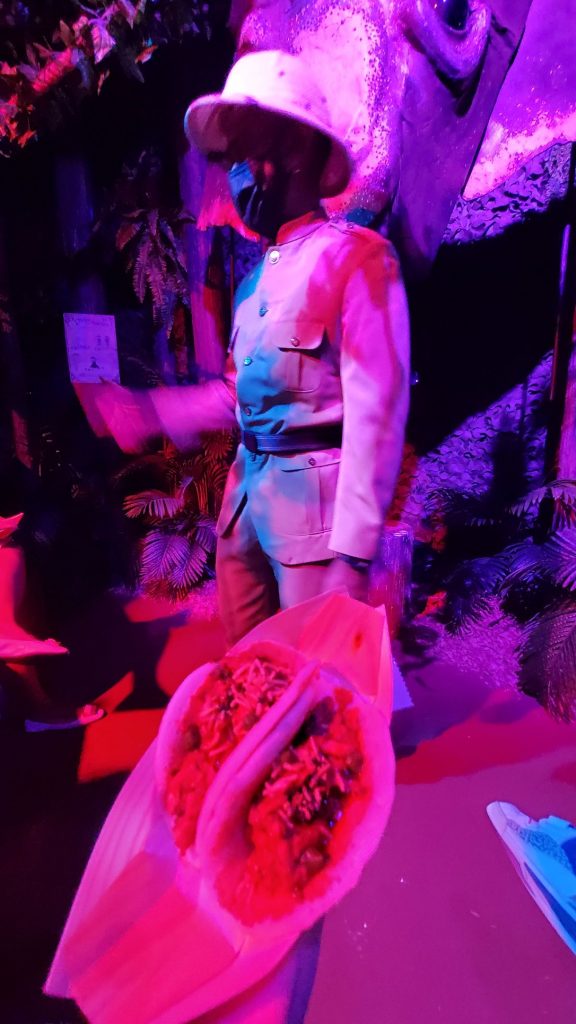 Once we were satisfied with our knots, we quickly moved on to the next room. We “trekked” through a forest-like path and landed in “Calcutta”, now modern-day Kolkata. There, we were greeted by Ali, the Parsee guide and Kiouni, the elephant in the story.

While getting “lost in the jungle”, we were taught how to make a drinking cup with nothing but a leaf and a toothpick. We were also served an Indian cuisine that had butter chicken sandwiched between dosa (thin pancake-like).

Fun fact: The performer also let us know that Jules Verne had never been to India and made up some of the city’s and village’s name such as Kholby and Rothal.

#5 Escape India to Hong Kong On The Kowloon Canton Railway 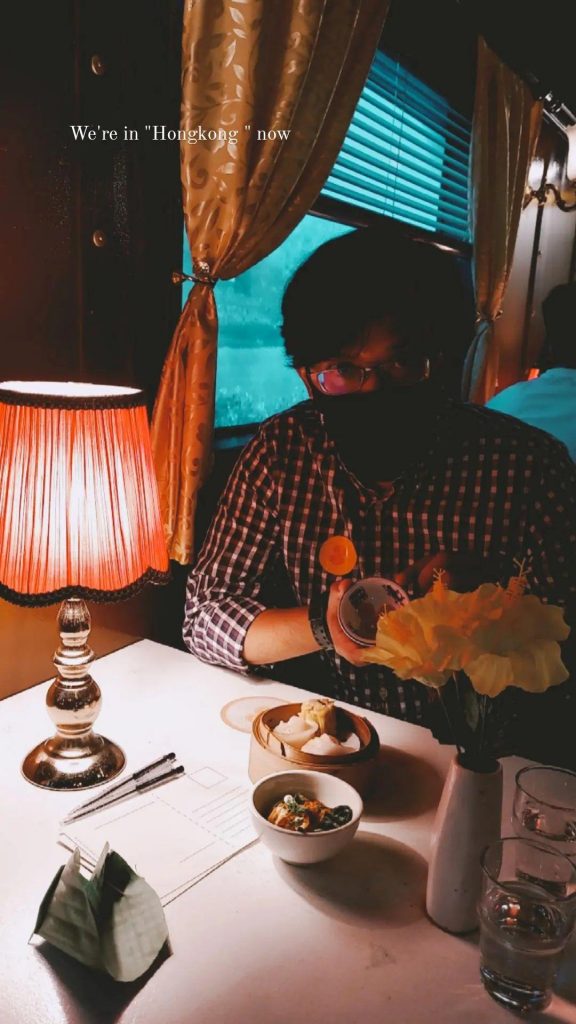 Once we were onboard the Kowloon Canton Railway, we were treated to what it might have been like to be in an up-scale 19th century train car like you might see in period films. They used large screen TVs to act as windows by constantly playing a video of the scenery passing by to simulate a moving train.

In this room, we were served dim sum such as siew mai, har gao and knife-cut noodles. And laid on the table before us was a postcard written in 19th-century lingo supposedly written by the protagonist, Phileas Fogg, to a friend back home. (Phileas Fogg didn’t actually write this postcard, nor does this postcard appear in the book, but it was just a way for AndSoForth to present 19th Century lingo in an immersive fashion.)

We were encouraged to write postcards of our own, but we were too busy eating and decided to leave the cards blank. Participants could bring the cards home as souvenirs.

#6 Descend Into A Coal Mine In Japan – Learn About Sake

It was a good thing we were both dressed comfortably as we then had to descend into a mine shaft (the stairs were cleverly hidden in one of the trains ‘cupboards’).

This coal mine does not appear in the book. The novel sees Phileas Fogg and his companions travel from Hong Kong to Japan via a coal-powered steamer and it also gave Andsoforth a reason to serve us sake and provide a brief history lesson on the longstanding relationship between Japanese coal miners and sake brewers.

We were also served softshell crab donburi, and then made to pull ourselves along a mineshaft to arrive at the final location.

#7 Join The Circus – Be Inspired By The Aerial Trapeze Act 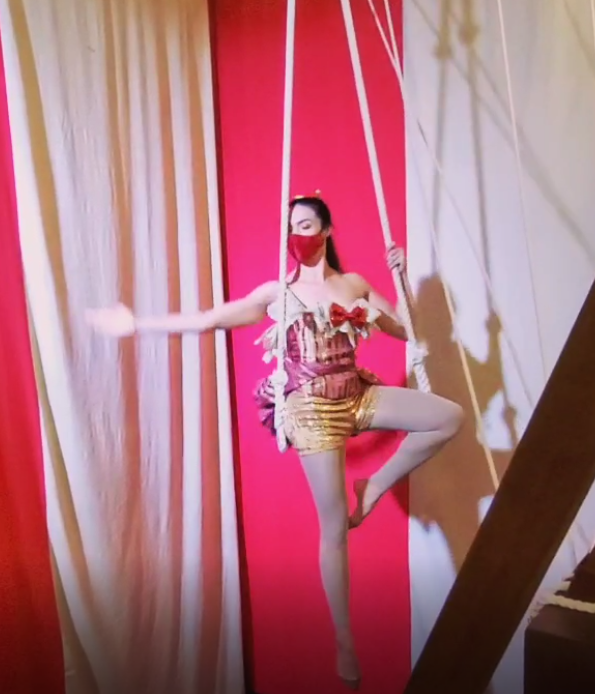 In Japan, Phileas Fogg and his butler Passepartout got separated. Passepartout then had to join a traveling circus in order to meet Fogg in San Francisco, which inspired the final location for this experience – a circus big top.

The host in this room – dressed as a circus ringmaster – provided us with nitro-frozen popcorn and ice cream, snacks that are typically found in circuses and carnivals. We then moved on to the last spectacle of the evening, a grounded hot-air balloon.

Here, we were treated to two trapeze artists performing some basic stunts, got some photos taken, and were informed that Fogg never rode a hot-air balloon in the novel, although the imagery was popularized in various films based on the novel.

#8 End The Night At The Reform Club

We ended the night at the same place Fogg ended his adventure – at the Reform Club. We were treated to a quiz that recapped the night’s events, offered extra merchandise for purchase, and given more photo-taking opportunities.

One of the backdrops stood out to us – a classic 19th-century style world map that charted Fogg’s journey and took up an entire wall. Unfortunately, the lighting was quite poor, and the photos did not turn out great.

As both my husband and I have read the novel before, we were both able to easily guess the destination of the room based on the intricate props and décor, and we found the quizzes too simple – but the quizzes aren’t really the point of the night, and no one is keeping score. So, this workshop might have worked better for those who have not read the book. Regardless of whether you’ve read the book or not, the performers will guide you through the story with witty banter, and by the end of the workshop, you would have a newfound appreciation for the novel. If you’re worried that shy or introverted persons would feel uneasy at this show, don’t worry as the artists are very well-practised and great at elevating the energy of the group, ensuring that every person participated, without putting them on the spot.

The cuisines served were decent and all were in small portions. But it didn’t matter because by the end of the last meal, we were filled. Overall, it was an impressive event, and it left a memorable impression on my husband and me.

Read Also: 5 Premium Experiences In Singapore To Show Appreciation To Your Staff During Year-End Break