If you’ve ever made an impulse buy, it’s not (entirely) your fault. Companies are experts at using sales techniques to engineer their desired outcomes. Ever bought something on impulse, only to realise afterwards that you don’t really need it? Don’t feel so bad, because it’s not entirely your fault. Chances are, companies have put in much effort into engineering the exact outcome of you making a purchase.

Companies make use of consumer psychology to create a shopping experience that directs consumers into making purchases they are not clear about. Therefore, the key to spending less lies in being aware of how and why you are being persuaded to make purchases.

Used In: Subscription services such as The Economist, The Straits Times, Apple

The Decoy Effect, or the Asymmetric Dominance Effect, is a cognitive bias in which consumers will tend to have a specific change in preferences between two options when also presented with a third option that is asymmetrically dominated.

In other words, consumers will make decisions according to their personal preferences when there are only two options. However, when introduced a third decoy option, they are more likely to pick the more expensive of the two original options even if they did not plan to do so initially.

A classic example where this effect is employed: The Economist subscription plans. 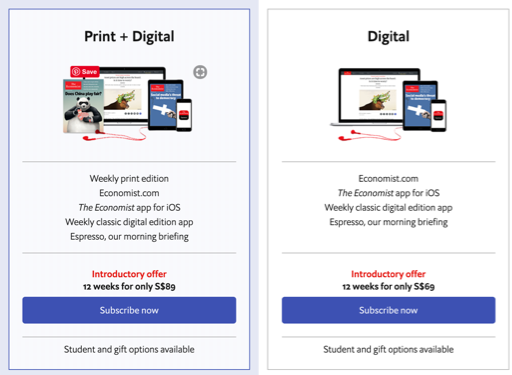 Let’s say you are initially presented with only 2 options, Digital and Print + Digital. If you only want to read The Economist online and don’t want physical copies of the magazine, you will definitely opt for the Digital plan without much hesitation. 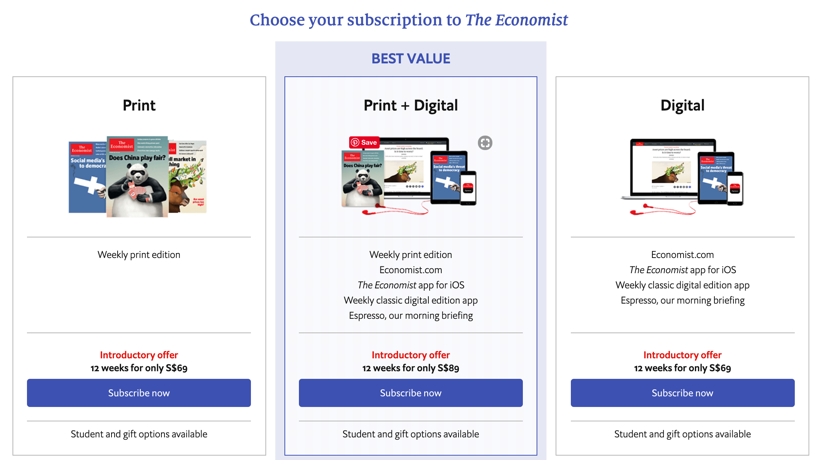 You now realise that it is more ‘worth it’ to opt for Print + Digital (S$89), since it is much cheaper than the price of two individual plans (S$138). But, do you really want the print copies?

In fact, the print and digital options are both decoys. They are asymmetrically dominated by the Print + Digital option, hence most people are likely to choose the latter instead because they believe that they are getting a better deal this way.

Professor Dan Ariely, a behavioural economist, tested this effect on 100 students. These students were made to choose which type of subscription to The Economist they preferred. Results showed that students’ choices were drastically different before and after a decoy was introduced, resulting in a 43% improvement in sales for The Economist!

In retail design, the Gruen Transfer is the moment when consumers enter a shopping mall or store and, surrounded by an intentionally confusing layout, lose track of their original intentions, tempting consumers while they are more susceptible to make impulse buys.

IKEA is a good example of a company that employs the Gruen effect to influence consumer behaviour. From the moment you enter an IKEA store, the layout is designed to nudge you onto a specific path through a maze of products, hoping that you become so disorientated that you forget what you really need to buy from IKEA, and may be compelled to grab a few extra impulse purchases. 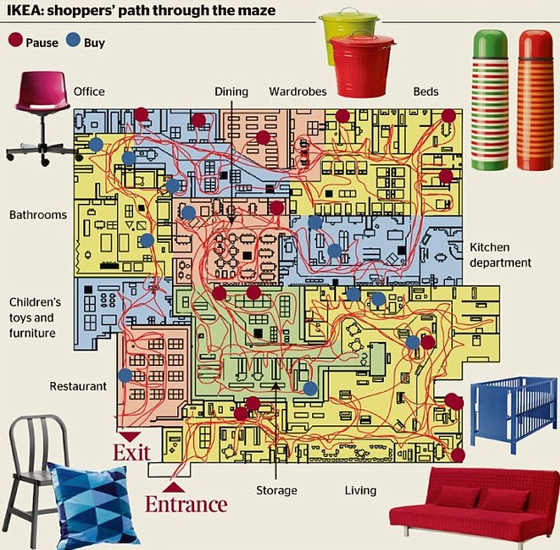 A route that a customer took through IKEA

The Scarcity effect is a cognitive bias that makes people place a higher value on an object that is scarce and a lower value on one that is available in abundance. Scarcity is associated in our brains with something positive and exclusive, as we automatically assume that it is scarce because everyone wants or has already bought this product and therefore it must be a good product.

Many companies make use of this cognitive bias when marketing products to consumers. They usually restrict supply, label products as ‘limited editions’, or run flash sales. This instills a sense of urgency in consumers and gives them little time to deliberate over whether they really need the products on sale.

McDonald’s is one company that comes to mind when you think about companies that have successfully employed the Scarcity effect. Options such as McGriddles and Chocolate Pie are highly popular with consumers in Singapore, yet they are not on the regular menu here. The company also extends the concept of scarcity to their collectibles, and the frenzy islandwide for a My Melody food holder last December is proof that it certainly works.

You will also find that hotels and airlines employ the same strategy when you are booking for your tickets. For example, third-party booking site Booking.com is very good at creating a sense of urgency by indicating that the property has been booked many times in the past 24 hours, and that there are limited rooms available. This urgency is further fuelled if they are running a flash deal that expires in a few hours’ time. You may be worried that other people will book the last room, and hence make a booking on the spot without giving it as much thought.

An example of a property on Booking.com that has only 1 room left

Research has shown that 75% of buying decisions are made in-store, and the last point in the store where consumers can pick up products is the point-of-sale (POS).

Beyond getting you in their stores, companies also aim to increase the amount spent by each customer. Hence, they place small, less expensive items near the POS for you to pick up right before you make payment. Supermarkets do this with candy, gum, and magazines near the cashier, and clothing stores like H&M display low-cost accessories where consumers line up to purchase.

This marketing tactic is especially powerful if the companies run a loyalty programme or promotion, and consumers are told that they just need to buy a few more dollars’ worth of products in order to redeem free gifts. H&M – Accessories at the counter

Many companies offer “free shipping” or “free delivery” these days, especially now that online shopping is increasingly prevalent. However, can anything really be “free”, considering that delivery companies charge for their services?

The truth is that the cost of free shipping needs to be passed on in other ways. Some e-commerce sites do a slight markup on prices, deliberately cut down on their customer service, or impose strict purchase or return conditions. Hence, we should not assume that shopping online always equates to cheaper prices.

Another way that companies try and cover the costs of “free shipping” is to get consumers to increase their purchase basket each time they make an order. Just recall all the times you have added random items to your shopping cart in order to hit the amount needed for free shipping – you probably did not need them, and they may have cost even more than the shipping fee.

Read Also: Why “Free Shipping” Offered For Online Shopping Is A Lie

5 Questions About The Open Electricity Market That You (And Your Parents) Probably Have
SCORE Membership: How To Use It For Discounted Grab Rides, FairPrice Rebates And Should You Pay For It?