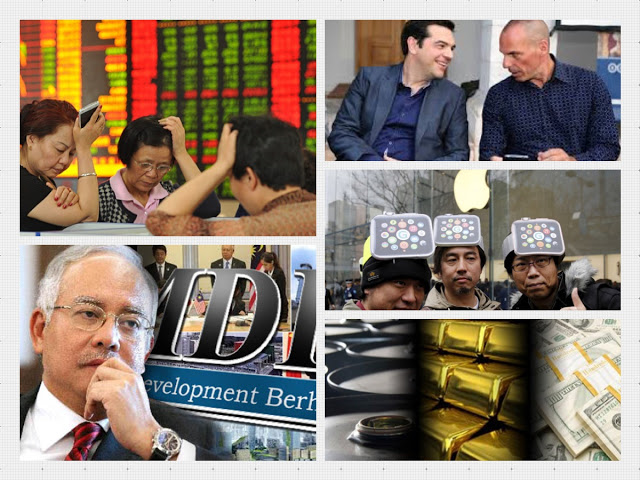 The month of July was extremely eventful for almost all the asset classes with commodities, currencies and bond markets in upheaval. Without further ado, here are the 5 economic hard-truths which we learnt last month, thanks to all the drama.

July started with the Shanghai stock index falling 30% over percent within a short month. A slew of measures from the Chinese government, including suspension of 1,400 stock counters and the throwing of more than $1 trillon dollars to support the stock market help stem the fall by the end of the first week of July.

In comparison, the US government set aside $700 billion on the TARP (Trouble Asset Relief Program) during the 2008 Global Financial Crisis. The Shanghai stock index rose more than 10% in the next two weeks, only to tank 8.5% in single day at the end of July. Things have since got worst!

Analysts are divided on where the Chinese stock market will go from there, with some experts on the Chinese stock market proclaiming that there is no bubble (Goldman Sachs, Societe Generale) and others predicting Doom and Gloom (Thomas Schroeder). The point is, no conventional investment strategy will work here in a market which is governed by mass hysteria and extensive government interventions. This is similar to betting in a casino, where only luck will determine the fate of a bet. The only difference is that you might have some fun in a casino.

Lesson: You can go to a Macau casino or the China stock market if you feel the urge to have a gambling adrenaline rush.

After the rout in commodity prices last year, the commodity markets went into a lull and slow recovery… before getting punched in the face in July again. Commodity prices across the board have tumbled between 15% to 50% within a short span of weeks, coincidentally matching the period where the Chinese manufacturing indices indicated a slow down of the Chinese economy.

On the bright side, our public transport fare in Singapore will be lowered by 1.9%, thanks to a combination of SG50, elections and lower oil prices (-30%).

3. South East Asian’s Economies are the next danger point

The economies of South East Asia have been thrown into the limelight thanks to falling commodity prices, weakening exports to China and a healthy dose of political saga. The Malaysia Ringgit and Indonesia Rupiah have fell to 17-year low.

Even with their fiscal position healthier than the time of the 1997’s Asian financial crisis, the region might fall into crisis once again as South East Asia nations accumulation of cheap US debt have been building up in the past few years, resulting in a triple whammy of rising debt value, falling trade revenue and shrinking foreign reserves.

With the fall of Yen and Euro in the past two years, export based emerging markets are finding it harder to maintain their trade balance. It will not be long before hedge fund managers and financial big boys take the opportunity to push the weakest currencies towards the tipping point. Malaysia, with a mixture of economic and political woes, might be one of the prime candidate that may trigger off a region wide currency crisis.

Lesson: There are still governments that have not learn from the mistakes of the 1997 Asian currency crisis.

After a brutal 2014 winter which hammered the profits of major western companies, the coming of spring and summer brought a new surge of profits for American and European companies. American and European economies (with the exception of Greece) continue their slow economic recovery with the American jobless claims falling to the lowest level since 1973.
Lesson: The slow down in Asian economies may have a much lesser impact on the Western markets than expected

5. Nobody really cares about Greece and it is still a mess

The Greek political drama gave newspapers around the world lots of materials to create sensational headlines, but the global financial markets pretty much hiccuped for a couple of days and life resumed normally for the rest of the world. The whole Greek saga became a side show as global investors were more interested in the state of the China economy and the plunge in the Shanghai Stock Index.

Without the economic power to rock the markets, the stunts which the Greek Government tried to pull to swing the negotiating balance towards their way failed miserably. The President of Greece surrendered unconditionally with the Greek economy and the bailout package in worse state than before.

This article was contributed by Xeo, who is the co-founder of Capital Gains Studio, the company behind the the popular economic board game Wongamania. Xeo also co-authored the best-selling “5 Elements of Successful Investors”  and runs a popular finance blog call Xeolyenomics”

Economic Indicators To Help Decide Your Vote – No 2 of 8: GDP Per Capita
Less Than 1% Real Growth In Wages For The Bottom 10 Percentile [Election Indicators]: No 3 Of 8