Some government-linked companies like SIA may be too big to fail, but that doesn’t mean investors can’t lose money investing in them. 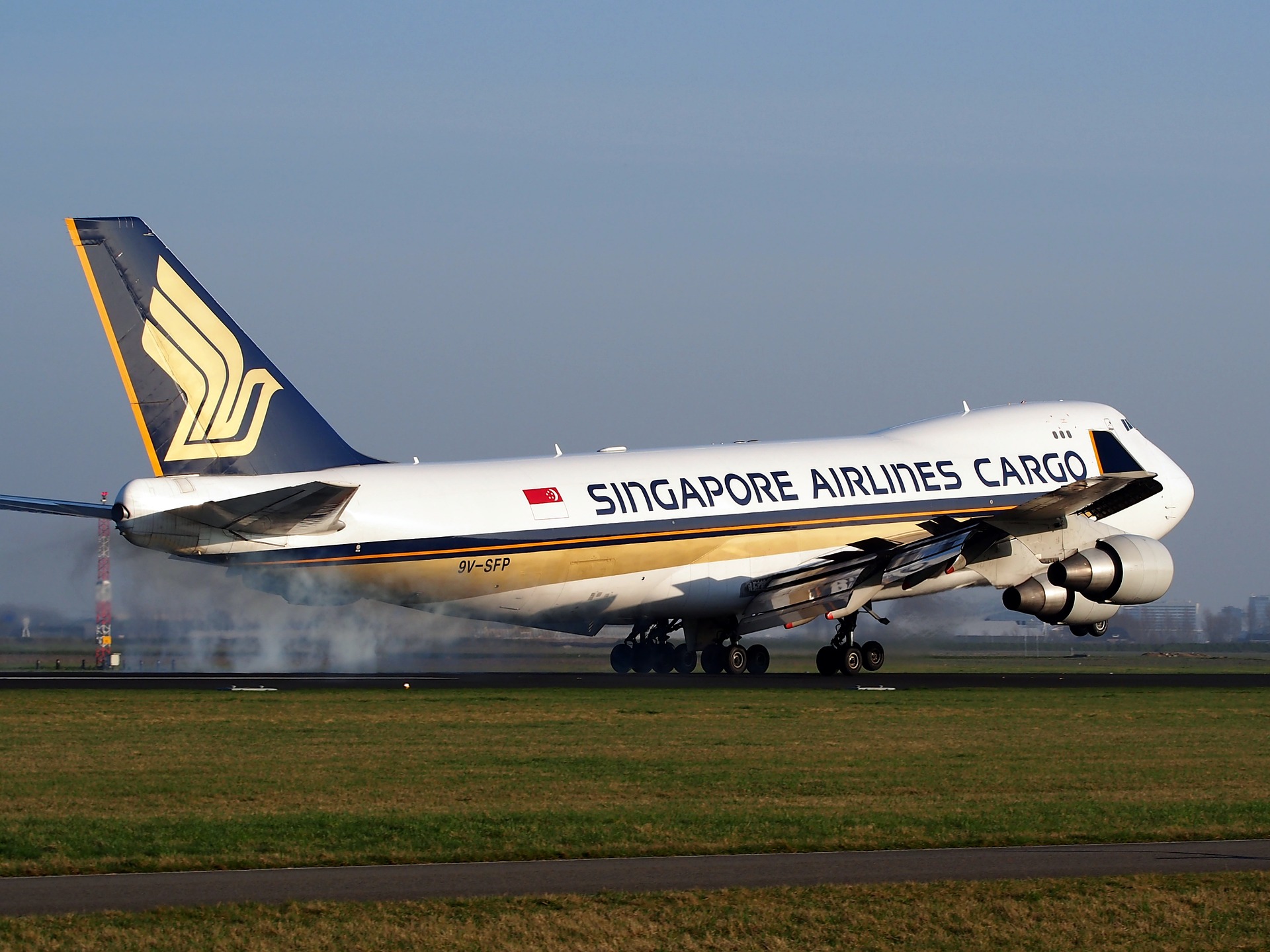 All of us are familiar with Singapore Airlines (SIA). As the national carrier of Singapore, SIA is a household name that most of us would have travelled on when we fly overseas. However, unless you, or someone close that you know, are working in SIA, chances are that most of us in Singapore would not have interacted with SIA much over the past 12 months.

That said, if you are an investor in SIA (SGX: C6L) shares, then the past year would have been a roller coaster ride.

In this edition of 4 Stocks This Week, we take a deviation from our usual feature of 4 stocks and instead, focus on 4 lessons that Singapore investors can learn from investing in SIA shares over the past year.

#1 Some Government-Linked Companies Are Indeed Too Big To Fail

Some of Singapore’s top companies are owned by sovereign wealth funds such as Temasek Holdings, which is in turn owned by the Singapore government. This distinction was critical for SIA’s survival in 2020 when its business took a massive hit due to the curb of overseas travel because of the pandemic. According to its FY20/21 results briefing, this led to passenger travel being down 97.9%. Revenue was down 76.1% to $3.8 billion, and the company posted a loss of S$4.3 billion, the worst in its history.

Once it was clear that the pandemic was going to be a prolonged war that may have a devasting impact on SIA, corporate actions were taken by Temasek to ensure SIA’s survival. This was even mentioned during one of the 2020 budgets when then Singapore finance minister Heng Swee Keat shared that Temasek will be spearheading a fundraising effort to inject more cash into SIA. Temasek currently owns about 55% of SIA.

According to SIA, total additional liquidity amounting to $21.6 billion (of which $8.8 billion is via Rights Issue and $6.2 billion from MCB) has been raised or planned for to help the Group navigate the COVID-19 uncertainty and to support its future growth. 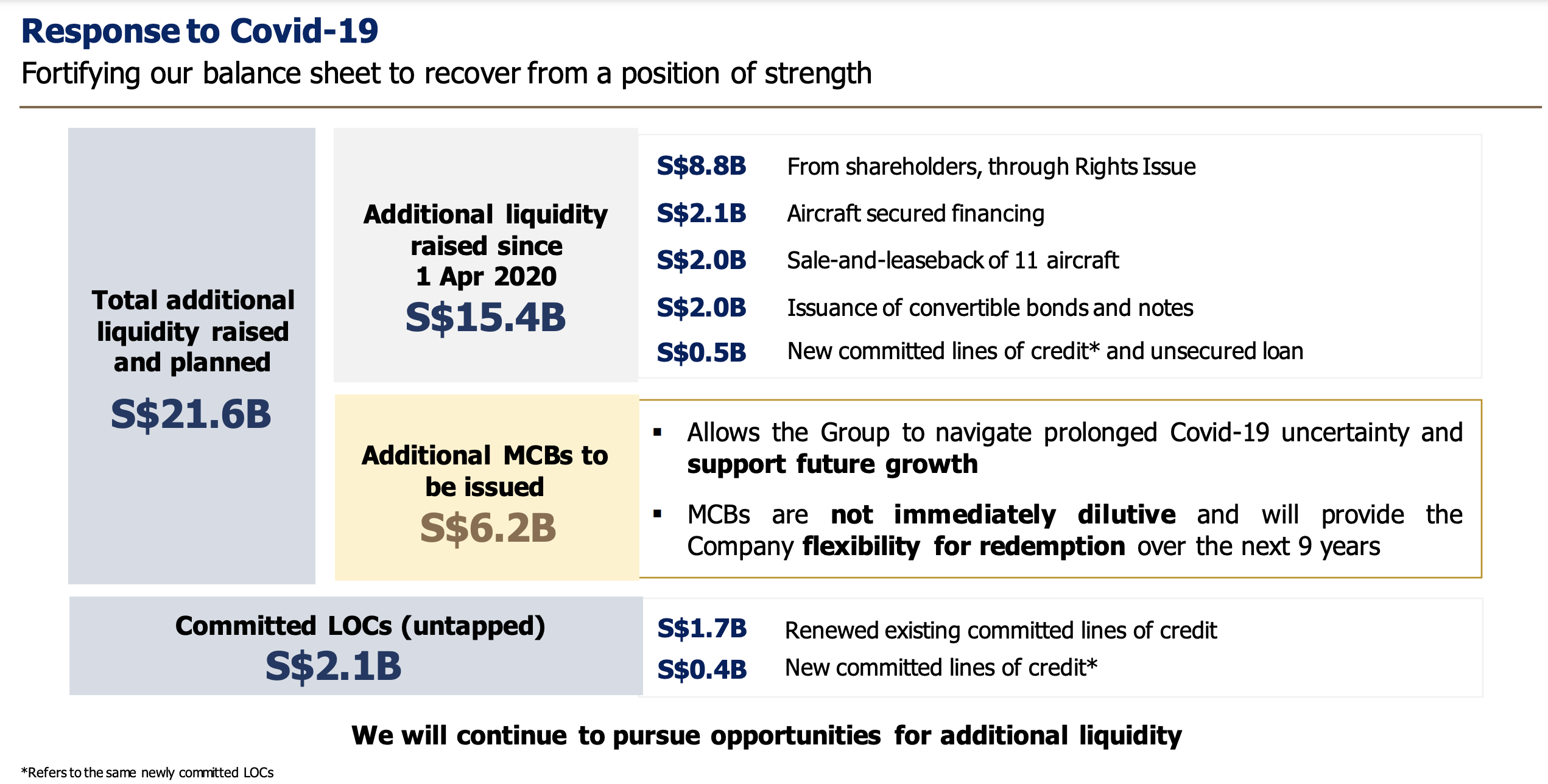 It’s hard to imagine any other companies in Singapore being able to raise this amount of money if it didn’t have the support of its state-owned shareholder. In fact, only a handful of companies in Singapore is even worth more than $8.8 billion in the first place, which is what SIA raised in its rights issues.

This reaffirmed our initial belief that SIA will not be allowed to fail as its brand represents an extension of Singapore.

Just because the government does not want SIA to fail does not mean its shareholders will automatically come out as winners, or even non-losers. The two are not necessarily the same. For example, existing shareholders who were unable nor willing to participate in the rights issue would have seen their shareholdings being diluted, in addition to share prices dropping.

The survival of a company doesn’t mean it won’t make losses, or that it will thrive in the future. While SIA has $7.78 billion of cash as of 31 March 2021, which puts it in a strong cash position. the question that SIA retail shareholders have to ask themselves isn’t whether SIA will survive the pandemic, but whether or not it can thrive and deliver a reasonable return on their investment in the future. Equally important is how long this could take, and also how much more money SIA may need to raise from its existing shareholders to get there.

#3 Don’t (Try To) Catch Falling Knives As An Investor

The phrase ‘catching falling knives’ is one that is commonly used by traders to describe those who attempt to buy a stock as soon as it’s showing a rapid decline. The idea is that trying to invest or trade a stock that is experiencing severe downwards momentum is not necessarily a good idea. Even if you genuinely believe in the potential of a stock, there is nothing wrong with showing a little patience before cautiously entering a position.

When we look at just how quickly SIA share prices fell, it’s a reminder that what goes lower, can continue sliding lower before it bottoms out and slowly climb up.

As the saying goes, shares take the elevator down and the stairs up. So, don’t be quick to jump on a descending elevator unless you are prepared to ride with the company all the way down.

Black swan events are a metaphor that describes events that come as a surprise, have a major effect, and are often inappropriately rationalised after the fact with the benefit of hindsight. There are two parts to black swan events that we should know about.

The first is that black swan events are unpredictable and can have catastrophic consequences, largely because they can’t be predicted in the first place. The COVID-19 global pandemic was obviously a black swan event and one that caught many sectors, including the airline industry, by surprise.

The second, and often the missed-out aspect of describing black swan events, is that people will be keen to explain it as predictable after the events have occurred. Ironically, this typically leads to more surprises, and to some extent, we can see this through SIA share price.

After hitting a low of 3.31 in August 2020, SIA share prices traded sideways for a few months before making a run in December 2020.

For those who remember, this was when news of vaccinations being approved in the U.S. was announced. In December, Singapore also announced that it would be rolling out a nationwide vaccination program that would take place over the next nine months, along with the country entering into Phase 3 of re-opening. Optimism was high and naturally, SIA share prices increase as investors start to anticipate air travel once again. From December 2020 to April 2021, SIA share price climbed from $4.38 (1 December 2020) to $5.72 (9 April 2021).

However, within one month, share prices fell once again to $4.50 (14 May 2021) due to the increase of community cases in Singapore.

Should this be a surprise to anyone? Probably not. After all, we are still living in a period where the COVID-10 global pandemic is very much alive, and any attempt to re-open the borders would naturally lead to a spike in COVID-19 cases in Singapore. Yet you can’t help but feel that many people, including the authorities and investors, were caught off guard (again).

In a strangely ironic way, SIA is caught in the same vicious cycle that Singapore’s economy is facing. If local community cases are low, or non-existent, there is confidence for international and business travellers to come into Singapore and for us to cautiously open our borders. This bodes well for SIA.

But unfortunately, it also leads to an increase in the risk of the virus resurfacing in the Singapore community, which would then lead to the possibility of another lockdown/circuit breaker/heightened alert.

So unless the world recovers from COVID-19, SIA may continue to be in this doldrum for a while, and any existing or new investors need to recognize this risk that they face.

Six Ways In Which Women Can Take Charge Of Their Financial Well-Being Today
Diamond Hands Vs Paper Hands: What’s The Meaning Of These Two Popular Investment Terms