Is Using Card Over Cash Always More Expensive When Travelling Overseas? We Travel To Europe To Put This Theory To The Test

Here’s how using a card to pay can be cheaper, safer and more convenient on your travels. This article was written in collaboration with DBS. Views expressed in the article are the independent opinion of DollarsAndSense.sg

Everyone enjoys going on holiday. When we’re overseas, we’re seeking a respite from our worries rather than to pile on more stress trying to plan the trip on the go. This is why planning for flights, accommodation, basic itineraries, insurance and exchanging money beforehand is crucial.

This was exactly what I was hoping to achieve after postponing my honeymoon for over two years trying to grow my start-up.

My wife never really accepted the little outing we had to Krabi after our wedding as the “official” honeymoon. This is why we decided to finally jet off to Europe for our belated honeymoon.

Being in a start-up, work still featured prominently as I decided to resolve a question that many jet-setting Singaporeans would have probably asked themselves at one point or another: should we use our cards or cash when paying for purchases overseas? 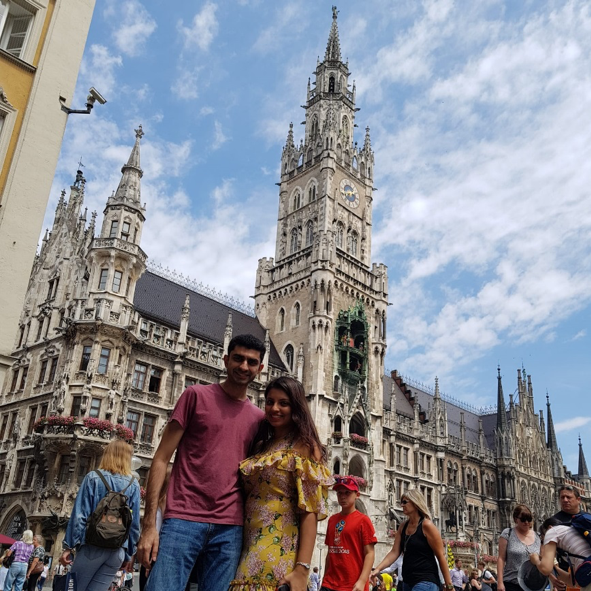 Here’s the obligatory tourist shot of my wife and I on holiday.

Our holiday destination is an important consideration. If we’re travelling to highly-developed, popular tourist destinations, such as the US, UK, Australia, Germany, Hong Kong, or countries with a large number of Singaporean tourists such as neighbouring Malaysia, Indonesia and Thailand, then exchanging Singapore Dollars (SGD) in those countries should not be a problem.

My wife and I were going to be in Munich, Germany as well as other European cities. As Munich is a highly-developed, well-established tourist destination, we weren’t worried about exchanging our SGD beforehand as we were confident of exchanging our money at competitive rates on arrival.

Nevertheless, it’s always a good idea to carry some local currencies, and we decided to exchange nearly a third of our money into Euros before flying off.

Our next destination was Ljubljana, Slovenia, which also uses the Euro. Upon arrival, we quickly realised that exchanging our SGD there was much less compelling. Many of the money changers offered extremely poor rates for the SGD, if they even accepted our SGDs at all.

This was one of the costlier mistakes we made – thinking we’d get equally competitive rates in cities that weren’t as established as Munich. On hindsight, we should have gotten our Euros in Munich.

Our second mistake was in Prague, Czech Republic. Unlike Slovenia, Czech Republic uses its own currency, the Czech Koruna (CZK). This meant that we couldn’t use any of our remaining Euros in the city. Money changers in Prague offered similarly poor rates, again, if they accepted SGD at all.

We eventually found one that looked reputable, but were hit by an unexpected commission charge of 28%! While it isn’t a scam, we should look out for that in the Euro-zone as not all money changers charge a commission.

Another challenge with travelling to ‘exotic’ cities is that we may not be able to obtain local currencies beforehand as many money changers in Singapore do not carry the currency. Similarly, once we get there, money changers there may not widely accept the SGD.

Before flying off from Singapore, I was encouraged to open an MCA by my colleague. As I already had a savings account under DBS, I opened the DBS MCA within 5 minutes online and received a debit card linked to my MCA in a few days.

Having never used the DBS MCA prior to my trip, I decided to just change €500. This worked out very favourably while I was in Ljubljana as I only had a small sum of Euros left after Germany. Better still, I was able to bypass the lousy exchange rates offered by local money changers and could spend this money, which was exchanged at a fair rate. I was also able to withdraw the Euros directly from my DBS MCA, with some service charges, which still worked out better than exchanging my SGD.

For places that accepted payment via cards, I could directly use the Euros I had in my DBS MCA account without worrying about any additional charges on my credit cards, suffering poor exchange rates on my SGDs or incurring service fees for withdrawals.

Naturally, the Euros in my DBS MCA were quickly exhausted, and I decided to stock up more Euros. This was easily done through DBS’ digibank mobile app even while I was overseas.

Lastly, it is worth noting that the DBS MCA currently supports 13 currencies, including the SGD as well as the Euro and other European currencies. I hope this number increases in the future, which will make it an even more powerful tool.

Withdrawing From A Foreign ATM

In Munich and Ljubljana, I was able to withdraw my Euros directly from my DBS MCA, albeit with additional service charges.

While I was in Prague, I decided to exchange only a fraction of my SGD in cash, again for emergencies or for vendors without a card payment option. I withdrew the rest of the money I required from a local ATM, which offered a far better exchange rate despite incurring service charges.

Should I Use My Credit Card?

Another very common method to pay for our overseas expenses is via a Singapore-issued credit card. You can read some of the pros and cons for using a credit card on your travels in this article here. Notably, you will likely incur foreign currency transaction fees and double conversions (or dynamic conversion charges (DCC)) on foreign exchanges.

Armed with the DBS MCA, I tended to use my credit card only when I was in a country that used a currency not supported by the DBS MCA.

For a comparison on which payment option – cash or card – was superior, I will use only my experiences with Euro-denominated expenses. Here are some of my learnings.

# 1 Cash We Exchanged In Singapore

We also realised we could withdraw Euros directly from my DBS MCA at foreign ATMs. We did this in both Munich and Ljubljana.

Obviously, this makes us worse off than using our DBS MCA debit card as there would be no additional charges beyond the €100. However, sometimes we can’t get away from using cash.

With this method, our exchange rate comes up to approximately €1: $1.6966, or 5.95% more expensive for the €100 that we had already exchanged on our DBS MCA account (shown below). Of course, the impacts of the service charges at ATMs, which are typically fixed, would diminish if we withdrew larger amounts.

We paid for many things with our DBS MCA. One example was when we paid for our McDonald’s lunch at the Munich airport. The bill came up to €11.38.

The peace of mind of not having to carry so much cash far outweighs the negligible difference in exchange rates between cash and on the DBS MCA. Another perk is receiving a 5% cashback when we spend $500 worth of foreign currencies each month (Offer valid now till 31 August 2018). You can visit this link to find out more about the promotion.

With the DBS MCA, we didn’t charge any Euro-denominated expenses on our credit cards. This was the one exception, for the benefit of our readers, to depict how much we were ultimately billed.

We made this transaction in Ljubljana, where we had limited travel options to reach the airport transfer for a very early morning flight. This was when we had to book a local taxi for €28.00. 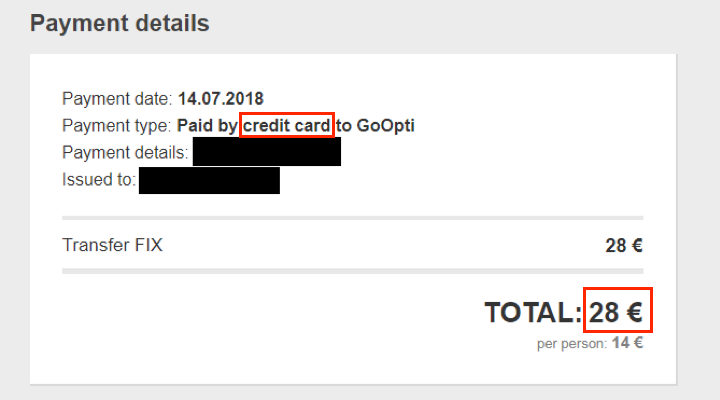 On our bill, this amounted to $46.31, translating to an exchange rate of roughly €1:$1.6539. Unsurprisingly, this was a poorer conversion rate compared to the DBS MCA.

In summary, here’s the exchange rates we received using the different methods of converting our Singapore dollars into Euros, as well as the benefits of using each method.

Plan For Your Overseas Trip In Advance

When planning for an overseas holiday, ensure that you do so well in advance to avoid panicking at the last minute or missing out on crucial things such as the items we need to pack, buying travel insurance or exchanging money.

When it comes to using cash or card, exchange rates aren’t the only thing we should be concerned about. In my experience in Europe, the exchange rates for the Euro for both cash and on DBS MCA was negligible.

Cash was extremely crucial as many small vendors and transport operators (trams, buses, and taxis) do not accept cards. However, we would only need a small quantity of it as majority of our expenses would be in places that accept cards.

The other thing I realised is that the term card does not refer only to credit cards when travelling. It can now refer to our debit card linked to our DBS MCA account. Utilising the Euro in my DBS MCA, I could bypass many fees and charges as well as be fully aware of the conversion rate. This is unlike using credit cards.

However, we also enjoy many of the benefits we thought we could only get with a credit card. This includes having greater convenience of carrying around smaller wads of cash as well as enjoying superior security and peace of mind against fraud and theft.

If we make the effort to plan in advance, we can also monitor currency fluctuations since they happen on a daily basis. Once we spot a favourable rate, we can make the exchange on our DBS MCA. The DBS digibank app also allows us to set FX rate alerts notifying us when a currency pair is trading at our target exchange rate.

Moreover, we can also make currency conversions at any point in time no matter where we are. This includes just seconds before we have to pay a bill or several months in advance before our overseas trip.

By taking advantage of the DBS MCA, we can save quite a substantial sum while spending the same amount in foreign currency overseas and continue to enjoy the benefits only credit cards traditionally offered.

*SGD deposits are insured up to S$50k by SDIC.

Have Unpaid Credit Card Bills? Here’s How Taking A Credit Card Balance Transfer Can Help You
Working Holiday Visas: 5 Things To Consider Before Embarking On Your Trip