Online Shopping: What Happens When You Pay In Foreign Currencies Using Your Singapore Credit Card

Pay the foreign exchange conversion spread twice or get stuck with the unfavourable rate quoted by Dynamic Currency Conversion (DCC). Is there a better way around this? 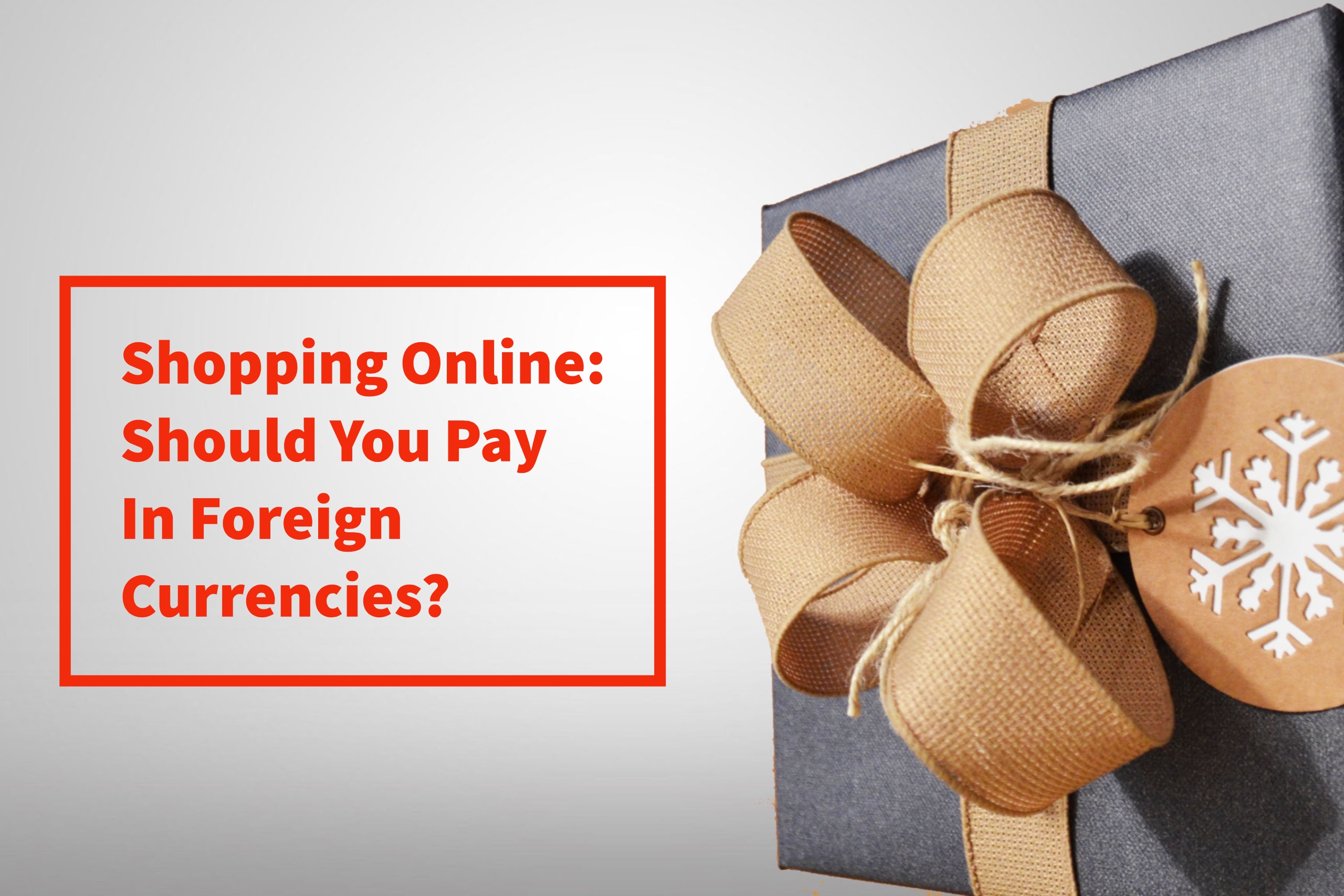 This article was written in collaboration with DBS. Views expressed in the article are the independent opinion of DollarsAndSense.sg

By now, those of us who regularly shop online already know the added convenience it brings to our lives. Not only are we able to buy products we need without stepping out of our homes, but we’re also able to purchase products only available overseas from e-commerce sites like Amazon and Alibaba.

One of the main factors fuelling the growth of online shopping has been the rapid adoption of cashless payment systems by both merchants and shoppers. By enabling customers to pay for their purchases with a credit card, transactions between both customers and merchants can take place seamlessly.

However, frequent online shoppers would know that the convenience of using a credit card for their online shopping binge isn’t without its own costs – literally. Unlike using our credit cards for local purchases, paying for overseas purchases with a credit card issued in Singapore comes with a small fee.

To understand this, we first need to understand what happens when we use our credit cards for overseas purchases.

Read Also: 4 Hidden Costs You Are Paying For When You Shop On Online Sites Based Overseas

How Do Our Singapore Credit Cards Work?

When we buy an overseas product online (or even in an overseas country), the price of the product will be charged in foreign currency. For example, if we were to buy a pair of shoes from an online store based in the UK, the price will be in British Pounds.

Most people assume that when they pay using their Singapore credit card, British Pounds are simply converted to Singapore Dollar, and charged to our credit cards. This does not paint the complete picture. 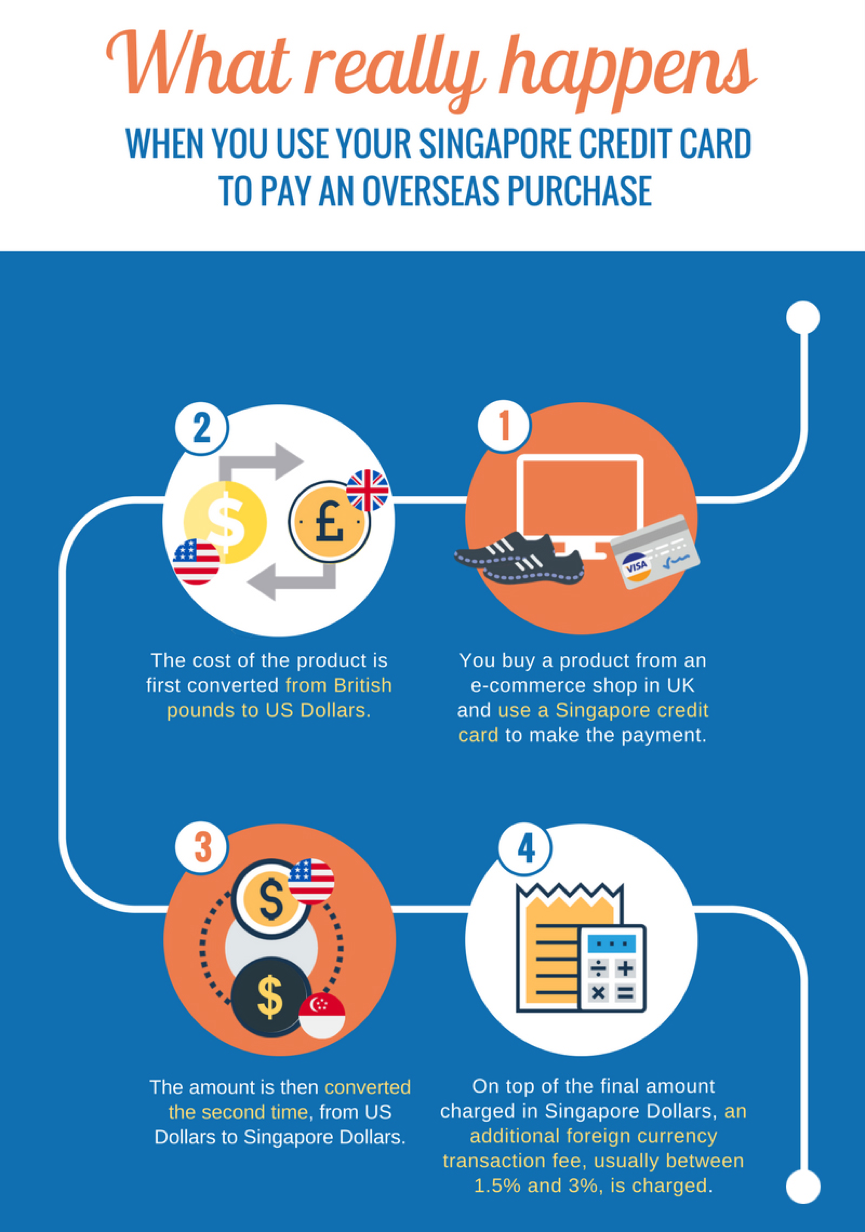 From the illustration above, we can see that in addition to a foreign currency transaction fee, local credit card users will also incur a foreign exchange conversion spread twice, instead of once, when using their credit cards.

Opting To Pay In Singapore Dollars Doesn’t Save You Money Either. It’s Often More Costly!

In actual fact, shoppers would usually end up paying more, not less, after selecting to pay in Singapore Dollars. That’s because the overseas merchants use what is call a Dynamic Currency Conversion (DCC), to convert the price from foreign currency to Singapore Dollar, on our behalf. This exchange rate used in a DCC is almost always guaranteed to be poorer than if you were to just allow the credit card company to do the conversion for you.

DCC is also offered at times during online shopping so you should take careful note to opt out of it if it’s being offered as the default choice when you are making payment.

In addition, you will still have to pay a foreign currency transaction fee as well. So the end result is that you having to pay more, instead of saving.

Even though you are paying a little extra when using your credit cards overseas, it doesn’t mean you should stop using credit cards completely when shopping overseas.  In fact, we ourselves are huge advocators of using credit cards, even when we are overseas, due to the simple fact that it gives us 1) convenience as we do not have to worry about overchanging the amount of foreign currency we need and 2) safety, as we do not have to carry large amount of cash on hand while travelling in unfamiliar places.

As a smart overseas shopper, we should ensure that we specifically use credit cards that reward us with more perks for overseas shopping.

For example, the DBS Altitude Card gives you 2 miles for every S$1 that you spend in foreign currency. So while you might be paying a little extra for the overseas transaction, the cost is mitigated by the fact that you receive bonus miles on your foreign currency spend

Once again, we must stress that if you opt to pay in our home currency (i.e. Singapore Dollar) through DCC, or did not realise that you are being charged in home currency instead of foreign currency through DCC when making your online overseas purchase, then you will not receive the bonus miles that your selected credit card would have given you for foreign currency spend.

You can clearly see by now why we always discourage you from using DCC.

One clever way to skip the various foreign exchange fees mentioned for online shopping is to simply open a DBS Multi-Currency Account (MCA). The DBS MCA allows users to hold popular and commonly used foreign currencies such as the USD, Japanese Yen, Australian Dollar and the Euro in one single account.

By doing so, online shoppers can not only save on the 1.5% to 3% foreign currency transaction fee, but also avoid incurring the foreign exchange spread twice during their purchase.

The MCA also allows account holders to buy foreign currency online when they see a favorable conversion rate they like. They can buy the currency they want via funds transfer, which would then be automatically stored in their MCA.

Opening an MCA account and applying for a DBS Visa Debit card can be done easily. You can sign up for them on the DBS Website. For existing DBS/POSB customers, your MCA will be opened instantly when you sign up online. This will take between just 3 to 5 minutes and will come at no additional cost.

From now till 31 December 2017, DBS Multi-Currency Account customers who accumulate a foreign currency spend of S$1,500 through their DBS Visa Debit card will enjoy a cashback of $50. Click here for more information on this promotion.