Uncovering The Financial Truths Behind The Xiaxue-Gushcloud Catfight 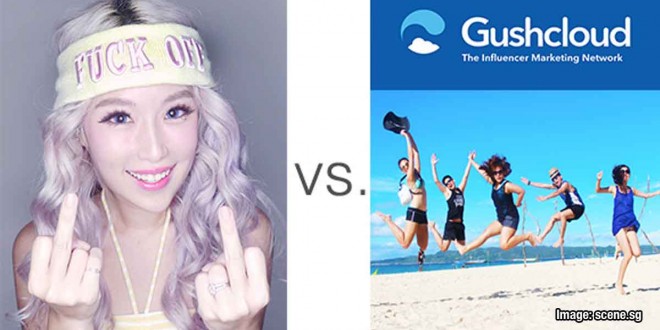 DollarsAndSense.sg gets excited about the financial behind Gushcloud and looks into whether the company is doing as badly as what Xiaxue has said.

We will admit− despite being a website ourselves, the blogging community in Singapore is something we never followed closely. Entrepreneurship is more of our thing, since we are in it as well. Hence, we have a mutual respect for companies such as Nuffnang and Gushcloud.

However, Xiaxue’s article on Gushcloud got us excited. She did some legitimate investigative journalism work. And we too, looked at Gushcloud’s Financial Statement to better understand the company. This is what we learnt.

Xiaxue is right in claiming that Gushcloud inflated its earnings during a newpaper interview in November 2012. The company revenue in 2012 was $396,000, which Xiaxue correctly worked out to be about $33,000 a month, and not $170,000, as the company claimed.

Gushcloud co-founder Vincent Ha has come out to admit that the newspaper report was inaccurate and that he only knew about the mis-reporting when Xiaxue wrote about it.

However, Gushcloud has indeed been expanding rapidly since then, at least from a revenue point of view. Here is a quick extraction of their latest financial statement.

Gushcloud was a loss-making business, but it has now broke even

However in 2013, the company’s financial statement shows a profit of $82,788. The main reason for the company’s turnaround was due to an increase in revenue of $569,413. At the same time, cost of service (i.e. amount paid to bloggers) only increased by $56,789. Concurrently, the company also reported lower staff costs.

The fact that Gushcloud can easily triple their revenue while incurring a direct cost increase of only about 15% shows at least either 1 of the 4 possibilities.

According to Xiaxue, she was able to buy ad spaces on blogs at much cheaper prices when she worked directly with the bloggers themselves.

Rather than to sneak around behind the agency’s back, some of the bloggers may wish to understand how you can make blogging a full-time job.

Clarifications: Gushcloud has clarified with us that the reason for the much better gross margin in 2013 was due to a change in their business strategy. Gushcloud charges a campaign management fee on top of influencers’ cost. This helps explain why cost of service increase only by 15% while revenue increase by almost 3x.

Most companies will not keep high cash holding since there is an opportunity cost associated with holding cash. The danger of low cash holding can be mitigated if the company has adequate access to short-term financing. Not surprising, SMRT Ltd (Feedback) reported Nuffnang themselves holding only $26,000 themselves (information yet to be verified).

The figures for Gushcloud trade receivable and trade payable are very close to one another ($388,013 vs $386,855). This means that it is likely that Gushcloud will only pay their blogger whenever they receive payment from their clients. Considering their low cash holding, this seems to be the only possibility.

Xiaxue is a business lady and this is all about business, or money

According to a techinasia interview done with co-founder Timothy Tiah, Xiaxue being involved with Nuffnang brought in 300 bloggers in 3 days, and 3000 over a one-month period.

Xiaxue has a stake in Nuffnang. That means she has vested interest in the success of Nuffnang and will become very rich if Nuffnang ever had a Sg Carmart type of exit. And that exit may not be too far off in the future. According to SMRT Ltd (Feedback), Xiaxue stake in the company is 5%.

The interview mentioned that the company was valued at $7 million based on a Price Earning (PE) ratio of 15 X (which meant it has a profit of about $450,000) back in 2009. We can only imagine that their profits should have increased a few folds in line with the growth of social media over the past few years. Xiaxue stake in the company could easily be worth millions as at today.

Clarifications: SMRT Ltd (Feedback) reported yesterday that Nuffnang was making losses in 2012, with revenue of only about $700,000. While that may be true, Nuffnang co-founder Ming Shen have responded that this is not a reflection of the entire Group’s performance since Nuffnang is just one of the subsidiaries under the Netccentric Group. He mention that the numbers are not indicative of the company’s actual performance.

Gushcloud is competition. According to people we talk to about the blogging industry, they are also much cheaper than Nuffnang, something that Xiaxue obviously doesn’t like, since it eats into her rice bowl. Without Gushcloud around, Nuffnang is a monopoly. And here in Singapore, we are very familiar with the cons of a monopoly (i.e. SMRT).

One thing that was absent in both Xiaxue’s and Vincent’s responses in the midst of the catfight was the financial aspects of their businesses. It may be exciting to follow the catfight between Xiaxue and bloggers like Kay Kay, but at the end of the day, it is all about business.

Disclaimer: DollarsAndSense.sg have no association with either Nuffnang or Gushcloud

Why The Difference Between Traditional And Budget Airlines Is Shrinking
Why Are Companies Like NuffNang So Complicated?