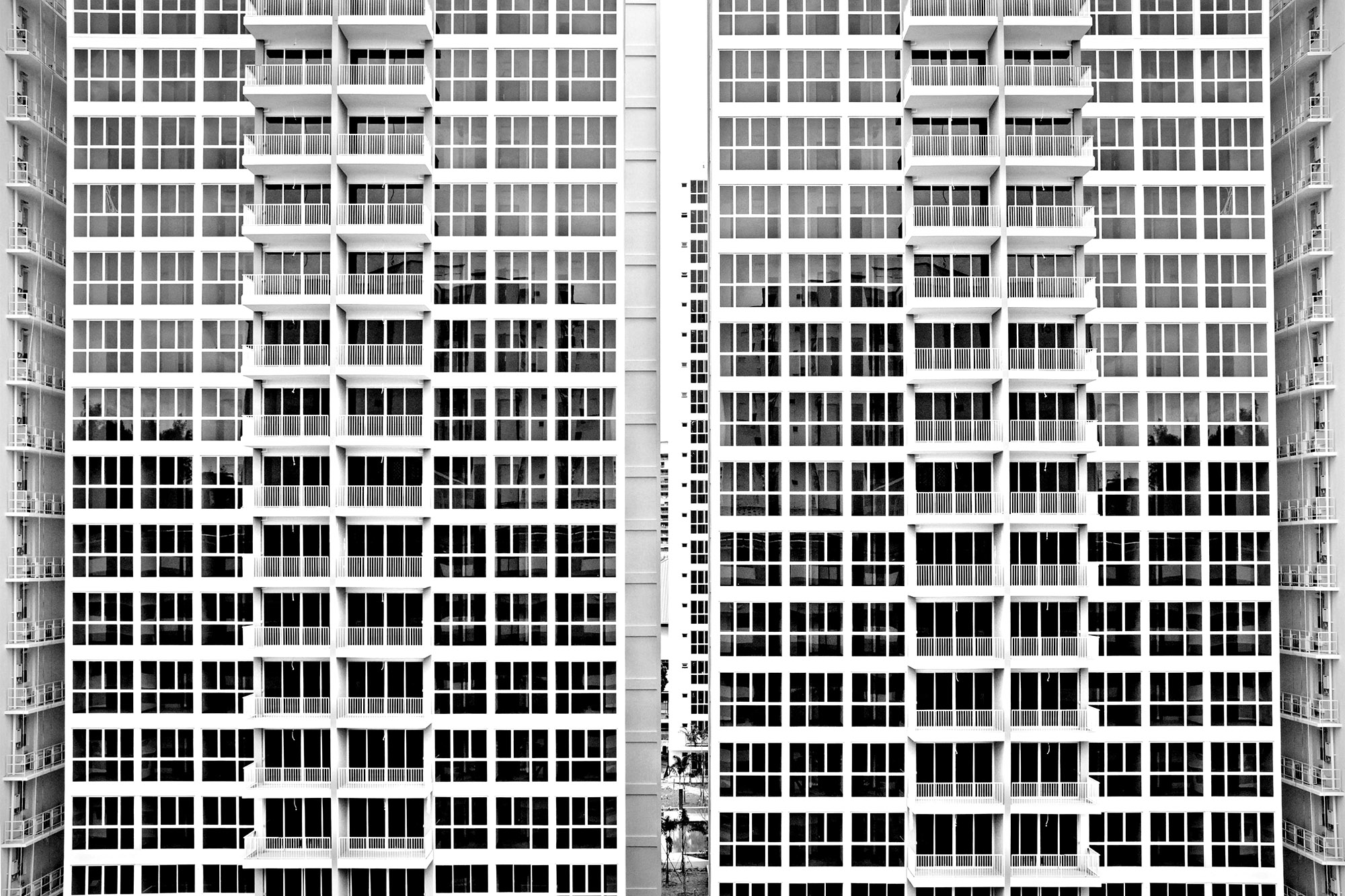 Every five years, the Singapore Department of Statistics collects detailed information on resident household expenditure in Singapore. The latest study, conducted in 2017/18, was published in July 2019.

This study is done on a regular 5-year basis to understand how much more Singaporean households are spending each year, and on what basket of goods. This can be a good guide in determining changes consumption patterns and needs of people living in Singapore.

When the Report on Household Expenditure Survey 2017/18 first came out, we did a quick analysis, and learned some very interesting earning and spending trends about Singapore households.

We all understand that our expenses will climb each year – that’s a result of inflation and increasing standards of living in Singapore. Of course, another reason we may also spend more is due to our own lifestyle inflation, but that is within our control, while the first two aren’t.
Read Also: Core Inflation Vs Lifestyle Inflation: What’s The Difference and How Do They Affect Your Retirement Plans? 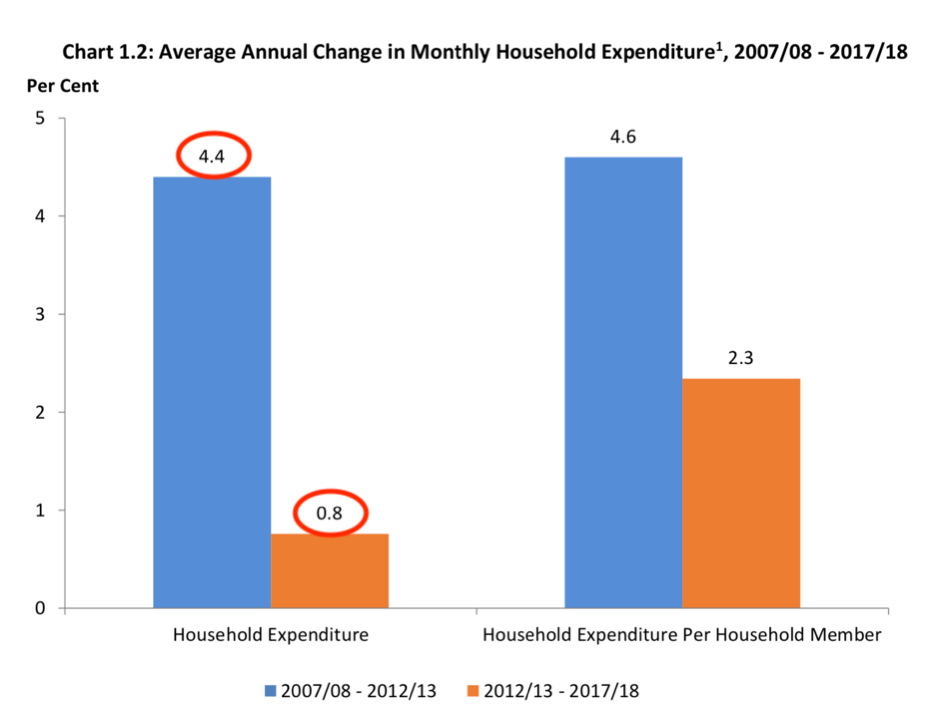 In some ways, this shows that Singaporean households did not have to struggle with as high an annual increase in household expenditure in the most recent 5-year period compared to the one prior to that.

When we looked at how much each person within Singaporean households are spending, based on their property type, we noticed a pattern that jumps out. 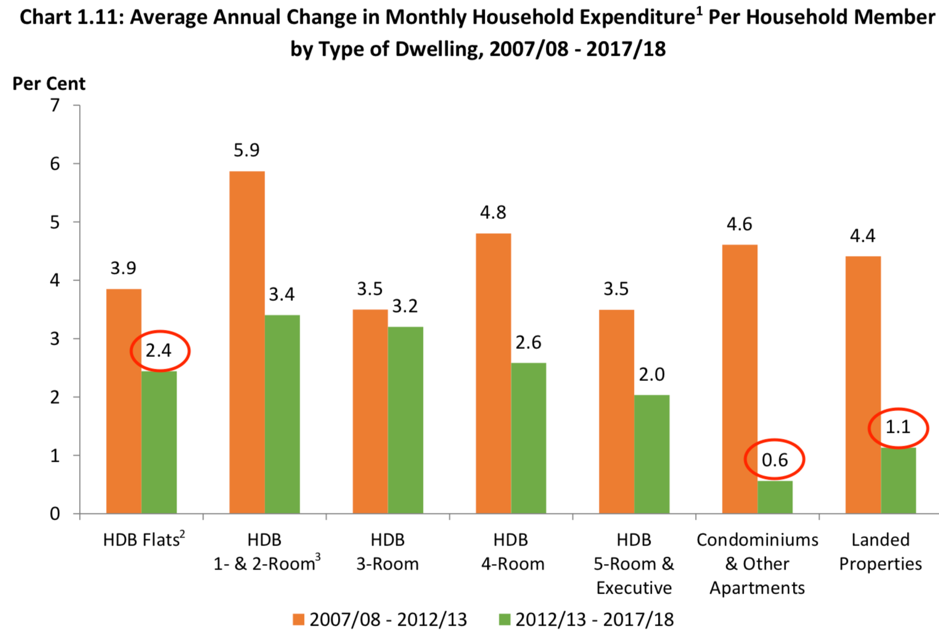 Firstly, we can see that those living in HDB Flats experienced an annual increase of 2.4% in their household expenditure between 2012/13 to 2017/18. This was significantly higher than those living in Condominiums & Other Apartments and Landed Properties, who only spent 0.6% and 1.1% more each year in the past five years respectively.

This was consistent throughout all HDB housings types – where, on average, household members were spending more each year compared to those living in private households.

Read Also: Singapore Inflation Rate In 2018: Here’s How Much Prices Of Everyday Goods And Services Have Increased

Why Are Private Households Spending Less Than HDB Households Each Year?

Nevertheless, it may still feel unjustified that this is happening in Singapore. Here are some reasons (in our opinion) that may account for why this has showed up in the stats.

Again, this can only explain part of the situation, as the 5-year period between 2007/08 and 2012/13 also saw them experiencing lower growth in real wages, while growth in their household expenditure was at a higher level. 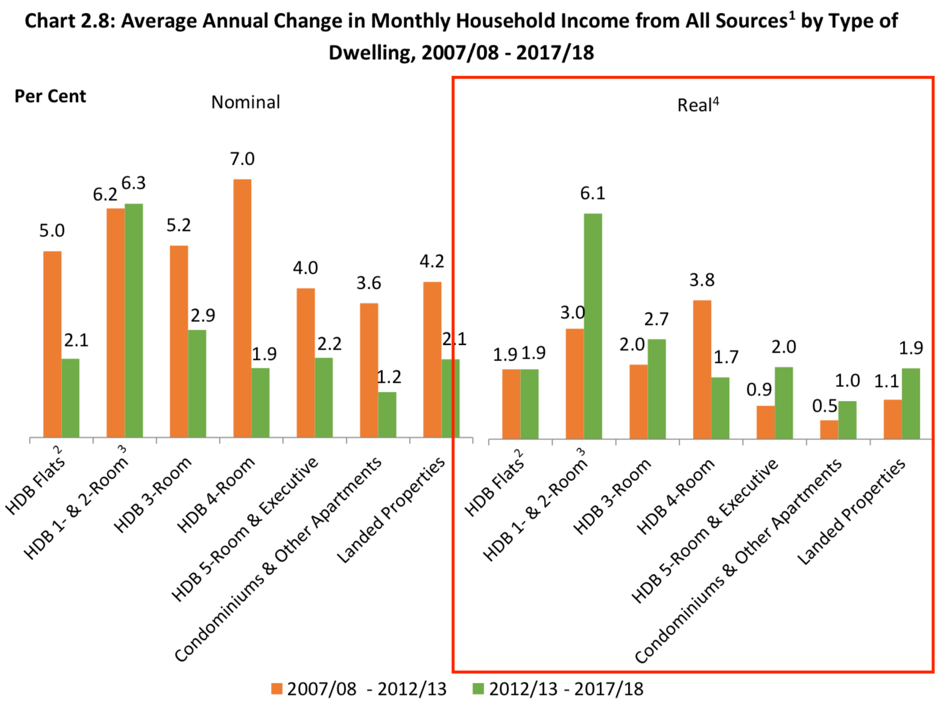 Looking at where the increases in households expenses occurred may be important as well. As we can see in the chart below, several expense areas decreased from 2007/08 to 2012/13.

The areas where household expenditure increased were Food, Educational Services, Health, Communication, Accommodation Services and Others. With the exception of the Others category, all the other areas can be viewed as non-discretionary areas, where families need to spend more on regardless of how well-off they are.

The discretionary expenses categories, such as Housing and Related Expenditure, Recreation and Culture and Clothing and Footwear categories experienced a decline in overall expenditure levels. 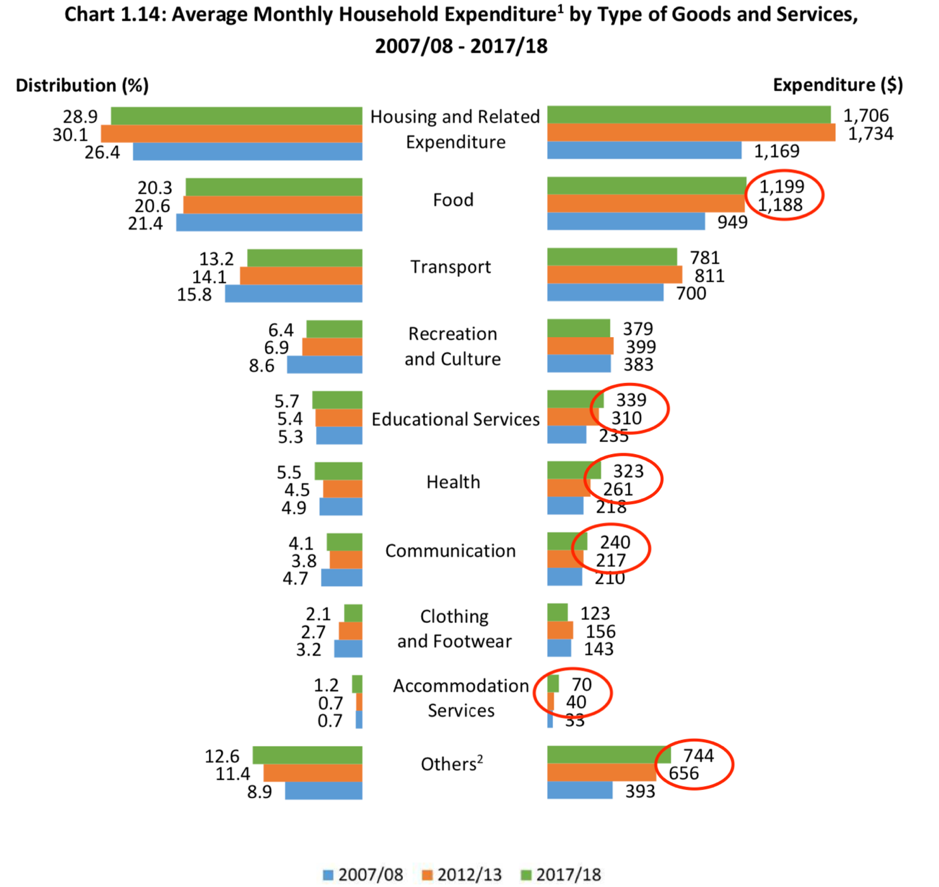 # 3 Actual Increase In Spending Was Level Across Housing Types

The point above segues into this point – as the majority of the increase in spending occurred in areas which were non-discretionary.

This levels the field across all housing types, as they had to incur these expenses regardless of their circumstances. This shows in the data as well, with the chart below showing how much more each housing type spent from 2012/13 to 2017/18.

# 4 Demographic Shift In The Past 5 Years

In this argument, we think that those living in private households are more likely to be older families who have worked longer and had more time to accumulate sufficient wealth to purchase such properties.

Using this premise, we reason that since Singapore is a rapidly ageing country, more of these households have retired or nearing retirement, where they try to preserve wealth rather than spend.

As shoe box private homes have become more prevalent in recent years, and only curbed in the end of 2018, more prudent and less well-off couples may be able to afford private homes.

After stretching to afford these homes, this group of couples may have to be extra prudent with their expenses in other areas.

This could be a sub-set of point 2 above – where household may be prioritising non-discretionary expenses, and hence experiencing a level increase in expenses in nominal value.

Read Also: Core Inflation Vs Lifestyle Inflation: What’s The Difference and How Do They Affect Your Retirement Plans?

Another interesting consumption pattern we should understand is how less well-off households may be less savvy spenders. In fact, Channel NewsAsia did a story and video interview about how those trapped in poverty were at higher risk of making poorer decisions.

Private households were also found to be spending a higher percentage of their household expenditure online compared to other household types. Typically, online purchases are made together with detailed comparisons across brands/products and after reading reviews of products, which may ultimately yield better value for private households.

Beginners’ Guide To Sending Money Overseas From Singapore Using Remittance Services
My Boss Put Me In Charge Of Weekly Team Lunches For A Month, Here’s How I Helped Us Save $168