OCBC Bank Promises Full Transparency In Its Advertising: Will Consumers Take To It or Is It A Doomed Marketing Campaign?

OCBC claims the moral high ground for advertising. But would this work or backfired for them? For those of you who do not know yet, despite what looks like it’s going to be a hefty marketing campaign expenditure, OCBC has promised to stop common advertising practices. Some of the practices they want to put an end to include restrictions hidden in fine print, complicated mechanics and misleading advertising.

While these claims look great on its advertisements on newspapers, online blogs and lie-detector videos, it’s starting to face some backlash for not having much substance to really back it up.

Perhaps, the strongest testament to its changing attitude thus far is a one-liner in it’s ad stating that these are actions “that we’ve also been guilty of in the past”. 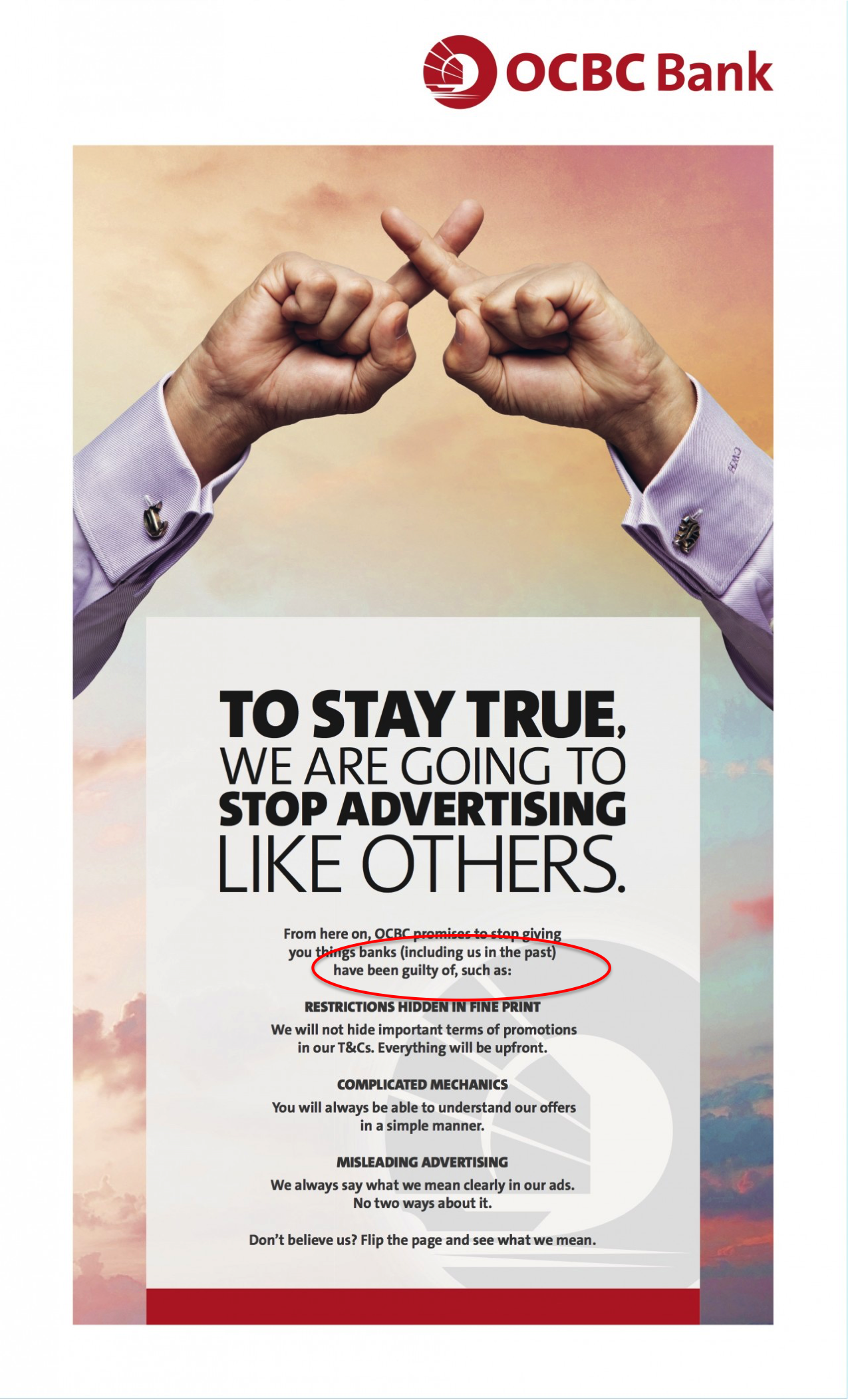 Of course, there was some backlash. As a profit-driven company with so many customers, there were bound to be groups of people who had been aggrieved with the bank’s strict policies or past changes to its products, and who were not going to like how OCBC is now claiming the moral high ground for advertising standards. 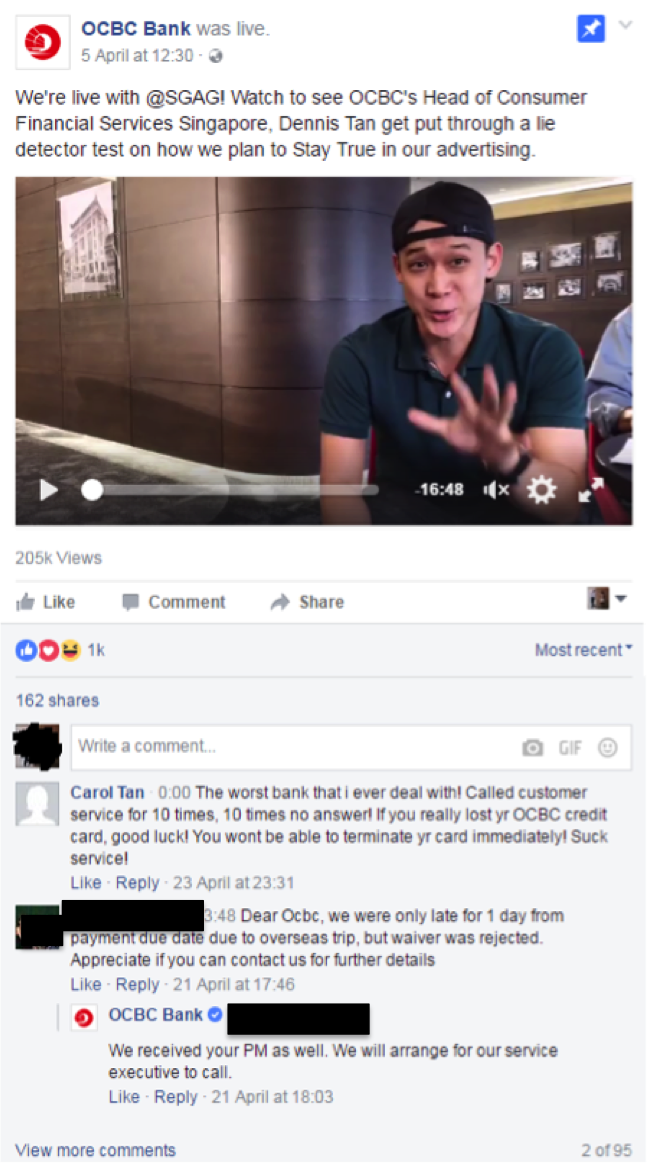 Many consumers took to social media particularly on OCBC own Facebook page to vent their frustrations based on their past experiences and ridicule the gimmicky campaign for leaving a bad taste in their mouth. Others simply sneered at its “holier than thou” attitude, knowing that it would still be doing the exact same things a bank needs to do to stay profitable and ahead of its competitors.

Financial blogger MileLion also wrote about the matter detailing how the bank hasn’t really behaved any differently after the campaign launch and giving examples of how it continues to hide behind its terms and conditions.

However, one thing OCBC did do right was that it tried to respond to everyone’s complains and remarks on its Facebook page regarding its products, policies and service. We didn’t read all the comments while writing this, but suffice to say, we did not notice anyone claiming their comments, or other comments, had been deleted. Props have to be given to its social media team for their OT work.

Read Also: [OCBC 360 Revised Interest Rate]: Here’s How Much (Less) Account Holders Will Be Getting

No one will argue with what OCBC is trying to achieve with its marketing campaign. Greater transparency is truly required for the banking industry and taking away jargons, fine prints and misleading advertisements is a big step in the right direction for consumers. If OCBC is truly able to pioneer and achieve this, it will be a great distinction for the bank to win customers over, and dominate the local banking scene.

The main problem, however, is that while this campaign claims to have ambitions to help society, it feels exactly like what it is – a marketing and PR gimmick – rather than a shift in the bank’s morals or a sense of wanting to do good.

Talk is cheap and paying for content marketing articles and advertisements on Mothership, SGAG, local newspapers and other sources is not going to cut it when it comes to people’s money, which can be a very sensitive topic. The issue here is not simply that they paid for content and advertising, people know that OCBC, like every other bank, does this and will continue doing it. That’s fine.

Instead, the issue is being trivial about it, talking about being more honest and trustworthy when it has nothing but fancy words, well designed advertisements and expensive marketing agencies to back it up.

All the expenditure on advertising and marketing, when it hadn’t really achieved any of what it claims, feels extremely premature. Even the lie-detector test felt out of place and patronising even if it had good intentions. This is mainly because, consumers are smart, and they would never believe that OCBC would pay to put one of their employees to the test if it was going to blow up in their faces.

Even the agency that rolled out the campaign, GOVT Singapore (not to be confused with the government of Singapore), stated that when they had pitched and won the OCBC deal, they wanted to do something different and bold. This just makes it seem like OCBC were sweet-talked into what the marketing agency had pitch, rather than wanting to make a real difference.

OCBC Has Taken The Plunge, And Now It Has To Deliver

Trust is sacred, and you have to earn it rather than buy it through a marketing campaign. What we would have loved for was if OCBC had revamped and launch products that exemplify the business culture they hope to create before making this claim. That said, it’s not a lost cause.

If you think about it, OCBC is definitely worthy of trust. Regularly featuring as one of the strongest banks in the world, OCBC is also part of the three main local banks in Singapore that Singaporeans would have interaction with.

Just that, in the past, you could always trust it, to stay true to its products and also rely on its terms and conditions. Now that it has taken this bold plunge to hold themselves to more transparent standards, the intense public scrutiny will no longer allow it, or its employees, to hide behind any fine prints or terms and conditions.

No other local bank has done this in Singapore, so if we’re going to trust any bank to be transparent, why not the bank that has taken a big risk with such a bold claim? Nobody (yet) has dared claimed these high standards.

That said, as anyone in a relationship would tell you, if you want trust, you have to earn it, over time. Once lost, trust is difficult to earn back.

With all the attention on OCBC and how it introduces products and treats its clients now, only time will tell if it can live up to this insanaely high expectation it has set for itself.

KrisFlyer UOB Account: How An Innovative (And Reasonable) Product Lost Public Faith Because Of Bad Communication
How To Get The Foreign Currency Exchange Rate You Want Before You Travel Overseas