[OCBC 360 Revised Interest Rate]: Here’s How Much (Less) Account Holders Will Be Getting

Is it time to reallocate your savings once again to optimise for interest rates? 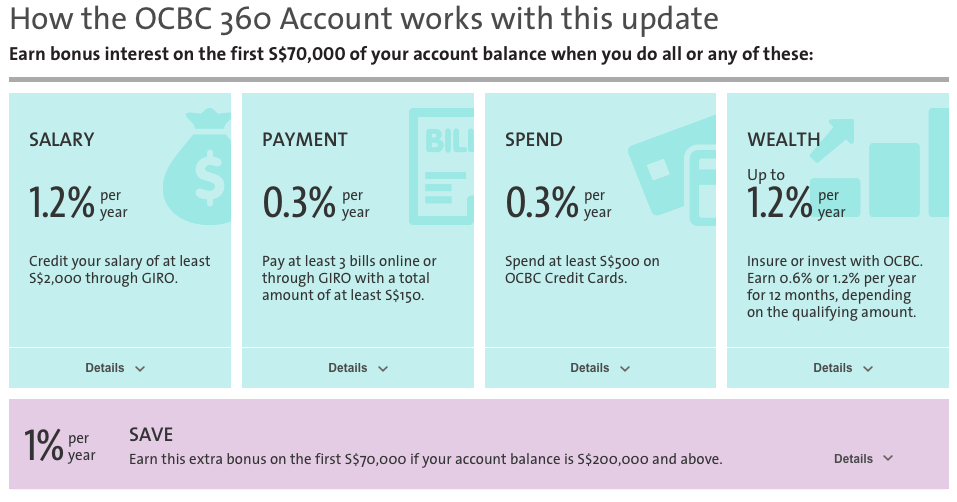 For the 2nd time in less than 2 years, OCBC will be revising its interest rate for its popular OCBC 360 savings account. Its last revision was back in May 2015.

Having written extensively about the OCBC 360 in the past, and even describing it back in early 2015 as one of the easiest way to get richer without putting in effort, it’s fair to say that things have now changed significantly.

With the latest revision in interest rate, which would take effect from 1 April 2017, OCBC 360 account holders should expect to get less interest from their account.

Here’s a quick overview of the changes.

Unlike what the bank has advertised, you would notice that we rather exclude the additional bonus interest of 1.2% or 0.6% for buying an OCBC product for the past 12 months. That’s because this requires us to buy a product that we are unlikely to do every year, or even at all. This is unlike the other conditions where we would do regularly such as using our credit cards, paying online bills and crediting our monthly salary.

We are also excluding the 1% bonus interest we will be receiving on the first $70,000 of the account. That’s because in order to enjoy this bonus, we will need at least an account balance of $200,000. This also means that while we enjoy a higher interest on our first $70,000, it is also offset by the lower interest we receive for the remaining $130,000, thus reducing the overall interest.

Read Also: 3 Things You Never Knew You Could Do With The OCBC Mobile App

Previously, OCBC gave bonus interest on the first $60,000 (now $70,000). For those who intend to maximise the interest on their savings, it’s likely that they will have an account balance of about $60,000.

Here’s a comparison of the interest you will get moving forward, compared to the past.

This may seem insignificant, but it still represents some extra moolah that account holders will lose out on. Of greater worry however in our opinion is that the latest change occurs less than 2 years after a previous change have already been made, which may lead to account holders to start wondering if more future changes are to be expected.

Is The OCBC 360 Still Attractive?

While the 1.85% interest rate, the OCBC 360 is still reasonably attractive though it’s a far cry from the 3.05% per annum interest that we were enjoying from as recent as early 2015.

The reduction of interest rate may also lead to other saving accounts appearing more attractive. Here’s a quick summary of some interest rates offered by other banks.

Read Also: Which Is The Best Savings Accounts In Singapore

Read Also: We Said Bank Of China Had The Best Savings Accounts In Singapore…And Got Punk’d

For existing OCBC 360 account holders, a switch to UOB may make sense. Do note however that to earn the interest rate from the UOB One Account, you must definitely spend at least $500 on the UOB One card or other selected cards, and have at least $30,000 in savings. Otherwise, you will be better off sticking to the OCBC 360.

One of our friend who is an existing OCBC 360 account holder told us that she is “super sian that’s it’s changed”. Do you share her sentiment? More importantly, which saving accounts do you now think is the best? Discuss your views with us on Facebook.