Beware of the hidden costs. 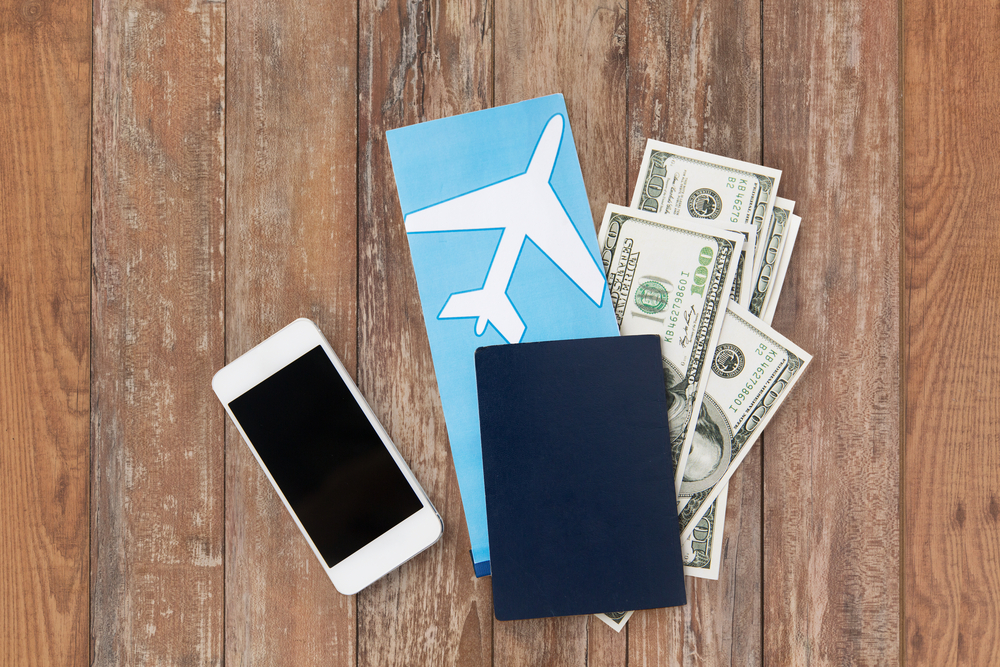 Travellers these days are a savvy bunch. We know where to go to get the best deals, or the cheapest flights. We use platforms such as Skyscanner to hunt for the best deals on the internet.

Unfortunately for us tech savvy people, airlines are pretty clever themselves. They have found creative ways to bypass the methods that we use to shortlist flights.

In this article, we will explain how this is done.

Before we start, we think it is important to first understand the types of travellers airlines frequently encounter.

# 1 Passengers Who Stick To Only One Airline

The first type of airline passengers are the ones that would stick to one airline. In Singapore, that is usually Singapore Airlines, since they are our local airline, and would be able to offer us the best connections to other major cities in the world.

Typically business travellers, these are the people who just want to get on to the most suitable flights based on their itinerary. Whichever airline gets them there the fastest, and with the least amount of inconvenience, would be the flight to go for.

Usually holidaymakers, these are the people that are looking to spend as little as possible on flights so that they can spend more at their destination.

The budget traveller will also be the main focus of our article.

Skyscanner shows you the cheapest flights, or so you think. 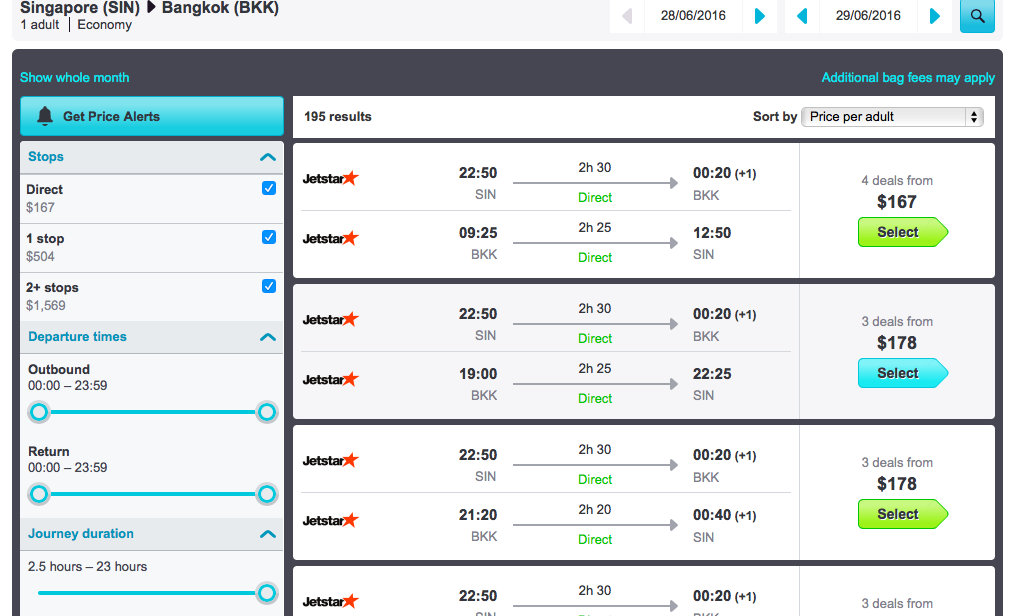 Not surprisingly, the airlines that list highest would (almost) always be budget airlines. After all, that is what these budget airlines are for. Bring you from point A to point B for as low a price as possible, without any other frills.

Crappy timing aside (we doubt anyone would want to start their holiday in Bangkok landing past midnight), most people would go for the cheapest flight they can find. But are they really getting the deal they were expecting?

We decided to do a little investigation.

We decided to look into a flight about 2 months out to one of Singaporeans favourite destination, Bangkok. 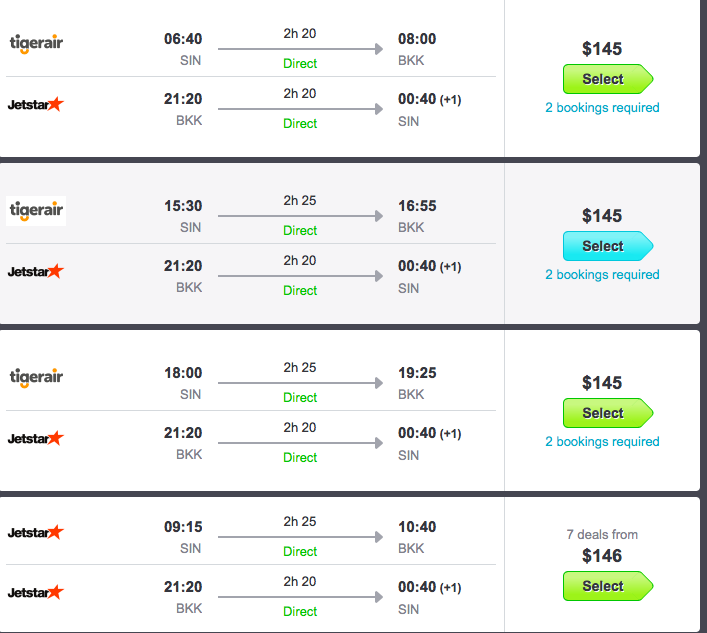 Among the top listed flights, the most realistic timing would be the one offered by Jetstar at $146. So we went ahead to try book it. 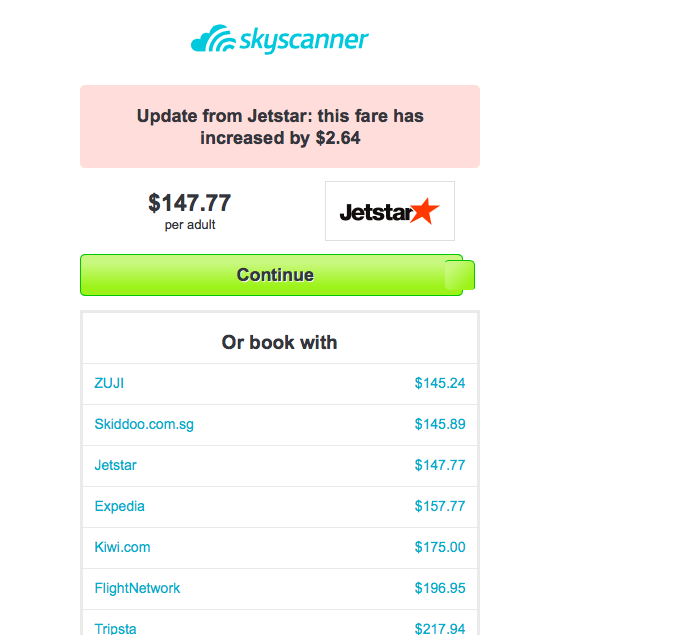 Immediately, we were informed that there is an increase in price from Jetstar. It seems a small amount, though arguably, unfair in our opinion, since we clicked on it because we thought it was $146, but we decided to continue since the amount is negligible.

Once we reach the Jetstar website, we selected on the same flights we initially wanted.

For some reason, the price of the flight has become higher at about $149. We don’t really know why. Perhaps the fees and taxes were not estimated correctly initially. 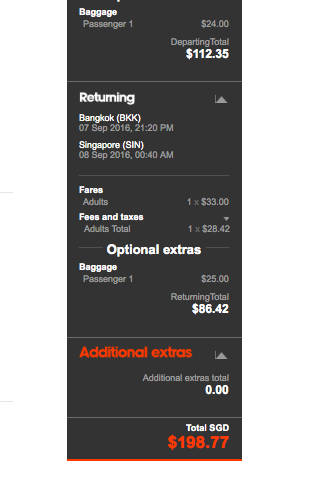 As with all budget airlines, Jetstar check-in luggage is not part of the fare. Passengers need to pay a separate fee for check-in luggage. The option is automatically pre-selected for you during the booking so you would need to check out the box if you DO NOT wish to have any check-in luggage.

We decided to leave it in. 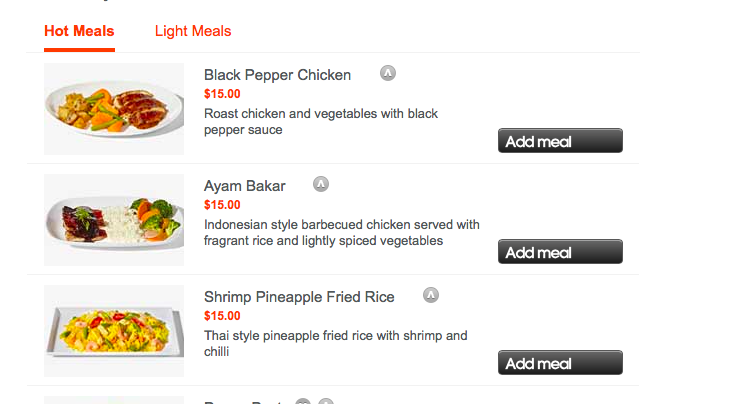 Meals are about $15 each. We won’t include this, but will take note of the price for comparison purposes later.

This is a pretty ridiculous option in our opinion. In the past, budget airlines used to charge people for selecting special seats (e.g. emergency row, front row). Now, they are charging you $5 just for pre-selected seats.

If you choose seats with extra legroom or at the front of the cabin (so that you can rush out), it’s extra fee to be paid.

We uncheck both boxes to not incur this fee.

The next page shows a default opt in for a $30 travel insurance. Obviously, we opted out of it. 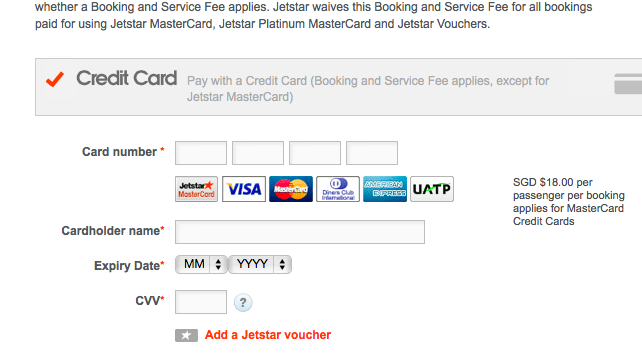 It’s a given that most people will pay for flight using credit cards. Using a credit card is free in most situations, but not when you are booking a budget airline ticket.

To use your credit card, you need to pay $18 per passenger per booking. We think this is just a way to earn more from customers without affecting the base price of the fare.

In total, our ticket costs us about $216, which is $70 more than what we originally expected to pay. This is inclusive of check-in luggage, but without food and any other add-ons.

Having already spent more than expected on budget airline, we decided to check out full-service airlines instead. For this, we used our own Singapore Airlines. 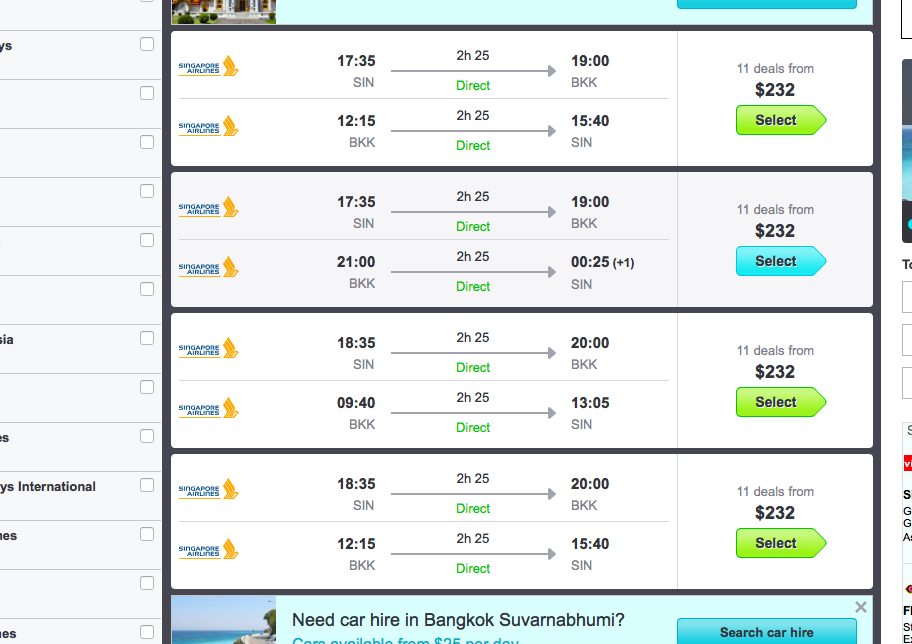 We were excited to find out that Singapore Airlines charges $232 for a return ticket. This would include check-in luggage, food and yes, no booking fee for using credit cards. In addition, Krisflyer members get to earn miles.

Unfortunately when we selected the preferred flight timings we wanted (morning departure from Singapore, evening return from Bangkok) and proceeded with booking the flight, we found that the final cost was much higher. 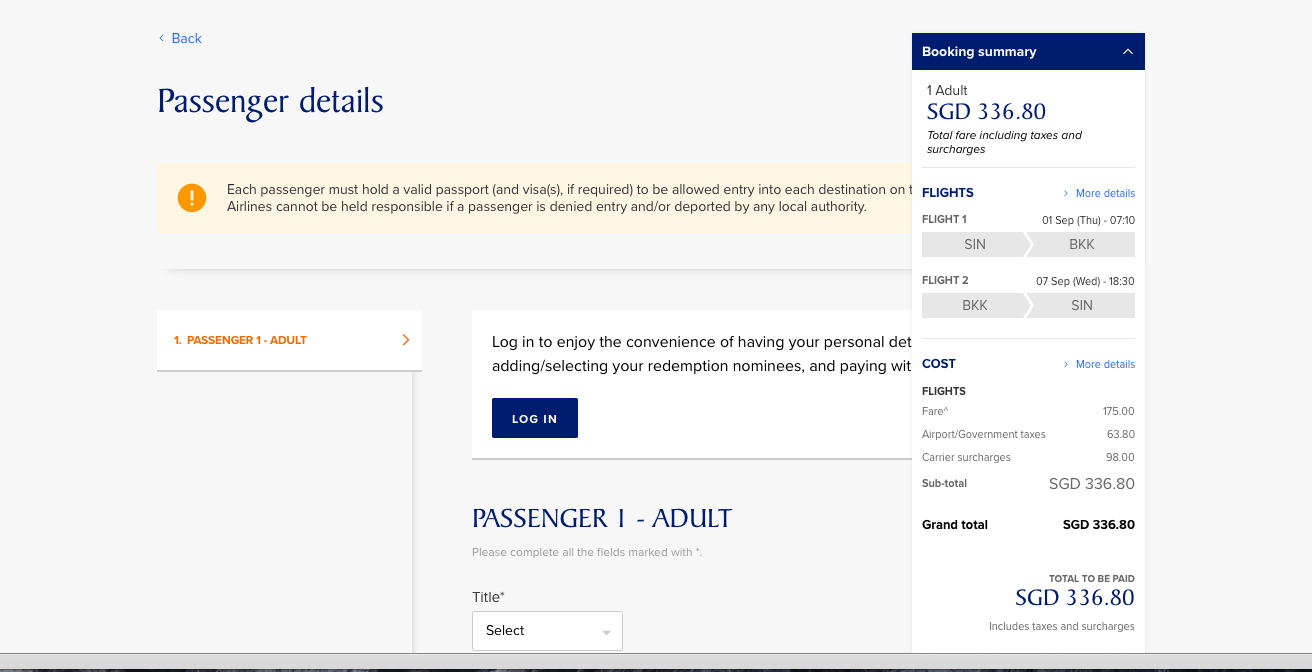 The final price, which was about $336, included taxes and carrier surcharge, making it $100 more than what we wanted to pay.

We went back and changed the timing of our flights. This time, we selected an evening flight out from Singapore and a morning flight back from Bangkok. This was the cheapest flight as advertised by Skyscanner. This time around, we got a price that was close to what we saw on Skyscanner.

With Singapore Airline, you get check-in luggage, food on the plane and of course, no additional surcharge for paying by credit cards.

Read Also: Why The Differences Between Traditional Airlines And Budget Airlines Is Shrinking

Here is a summary of our mini-investigation into how airlines priced their fares.

Budget Airlines Are Gaming The System:

In our opinion. Budget airlines are trying to game the price comparison system by removing add-on costs such as booking surcharge away from the base fare of the ticket. This does not just apply to Jetstar, but most other budget airlines as well.

In this way, comparison sites such as Skyscanner would recommend them as the airline with the lowest fare, and for customers to select them, only for the cost to be increased thereafter during the booking.

If You Need Add-Ons, Full-Service Airlines May Offer Good Value For Money

To save on budget airlines, you need to opt out on all the frills.

If you need check-in luggage and might purchase some food or drinks during the journey, you might want to consider selecting a full-service airline instead.

For full-service airline such as Singapore Airline, the prices you see on comparison sites are usually close to what you will be paying, as long as you stick to the flight timings that were advertised and not make changes.

The prices of airline fares that you see from comparison platforms may be helpful in helping you determine which are the cheaper airlines. Very often however, the price you see may not end up being the final price you pay, due to the hidden cost. This is especially true for budget airline.

So instead of relying only on comparison sites to give you the best deal, continue to go out there and do your own research to find the cheapest deals.