If you were already intending to buy an HDB resale flat soon, you are in luck! 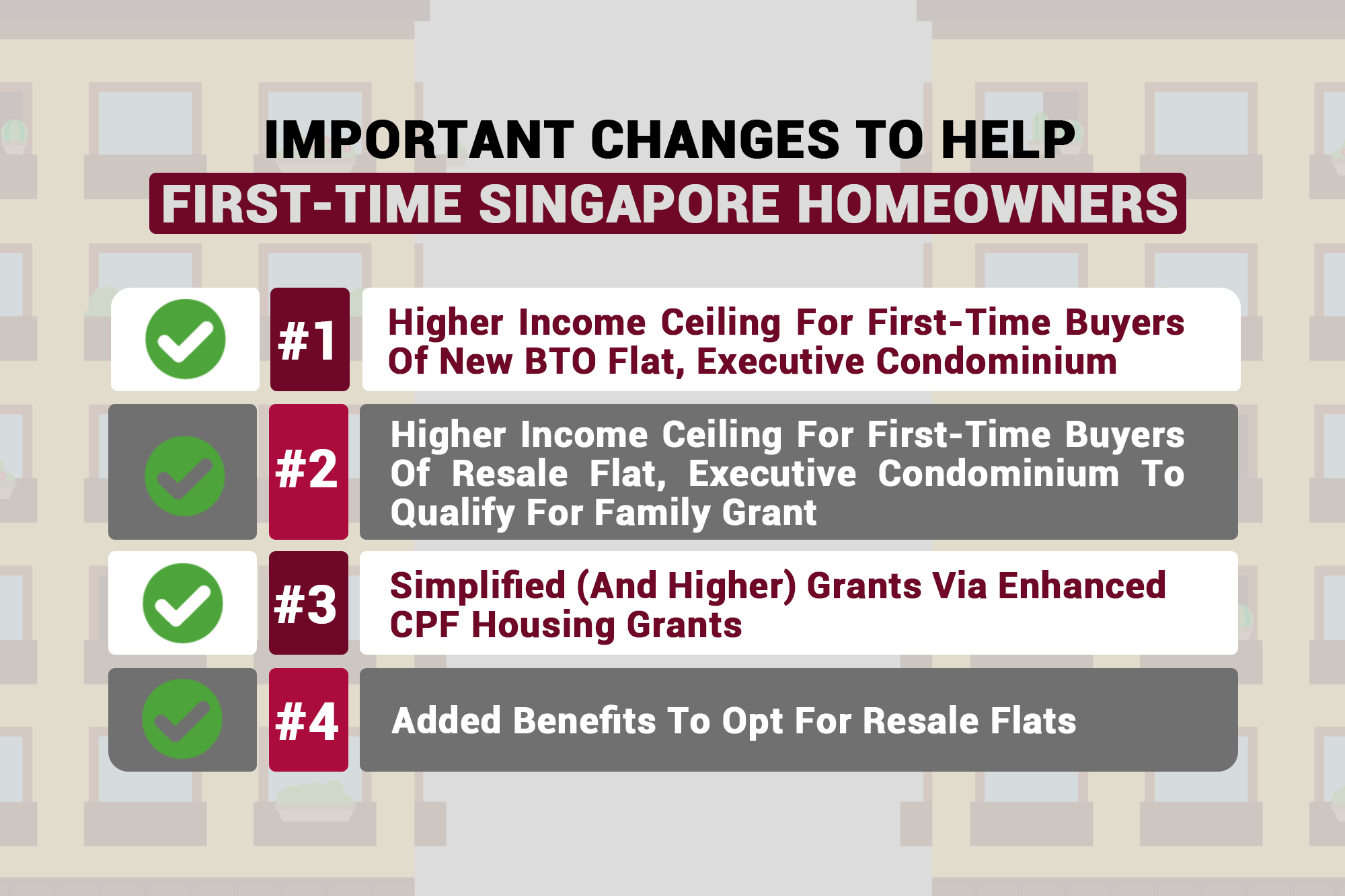 For those who are intending to buy their first HDB flat, the latest changes made on 10 September for HDB grants and the income ceiling requirement for the purchase of HDB flats will come across as good news for aspiring homeowners in Singapore.

The changes are not only positive, if you are a couple looking to buy your first HDB flat, but also helps homebuyers in understanding the more simplified types of grants that are available for both Build-To-Order (BTO) and HDB resale flats.

Here’s a quick rundown of the 4 important changes which are going to help first-time homeowners in Singapore buy their HDB flat.

Previously, in order to qualify for a BTO flat, the average monthly household income ceiling was $12,000.

Moving forward, the monthly income ceiling for household will increase to $14,000, giving more Singapore families a chance to buy their own BTO flat if they choose to.

Unlike BTO buyers who are offered subsidised prices from HDB when buying a flat, first-time buyers of HDB resale flats in Singapore have to pay market price for their flats. Market price in this instance is determined by both what buyers are willing to pay, and what sellers are expecting.

However, first-time buyer of resale flat and EC do qualify for the Family Grant. To qualify for the grant, average monthly household income have to be less than $14,000, up from $12,000 previously.

HDB Grants in the past were (similar to CPF) a little confusing at times. That’s because we previously had the Additional Housing Grant (AHG, for BTO & resale) and the Special CPF Housing Grant (SHG, for BTO only) and the Family Grant (for resale only).

The biggest winner of the latest change of in housing grant and income ceiling will be for first-time homeowners who were already intending to buy a resale flat.

Besides the increase in income ceiling to qualify for the Family Grant (see point 2), first-time resale flat buyer will now qualify for additional grant subsidies – because the Special Housing Grant (SHG), which was previously meant only for first-time home owners buying a 4-room or smaller BTO flat in non-mature estate – have now been subsumed into the Enhanced CPF Housing Grant and available for both BTO and resale flat buyers.

For example, a couple who earns a combined income of $6,000 per month and who intends to buy a 4-room resale flat will receive a subsidy of $50,000 (Family Grant) previously.

If they decide to stay near to their parents (within 4km), they can also qualify for the Proximity Housing Grant (PHG) for a further $30,000. In total, they can receive up to $115,000 in grants.

Other Changes & Initiatives Worth Noting

Besides the abovementioned changes, there are also positive upwards revision for other schemes such as the income ceiling cap being raised from $6,000 to $7,000 for the Step-Up CPF Housing Grant.

HDB also announced that it will be launching a new housing portal which will allow buyers and sellers to transact HDB flats on a single platform. It will be interesting for us to observe how HDB owners and potential buyers take to this platform once it’s launched, as opposed to the private solutions being used today such as those offered by PropertyGuru and 99.co.

6 Unexpected Cost Areas Singaporeans Should Look Out For When Buying A House (Whether It Is A HDB, Condo Or Landed Property)
Buying A Resale Flat? Here Are 8 Things To Consider When Choosing Which Unit To Buy