Fundsupermart Is Making Big Waves (Again) With FSMOne, And History Is Repeating Itself

iFast latest product, the FSMOne, is making headlines just one day after being launched

Fundsupermart was a financial technology (FinTech) company even before the term “FinTech” was coined.

Since its inception in 2000, the company have expanded into four countries (Singapore, Malaysia, Hong Kong and India) with its main value proposition being the ability to offer retail investors low cost and convenient access to investment opportunities, via the use of the Internet, and without having to go through traditional financial intermediaries such as banks.

Those of us with good memories would remember the time back in 2013 when Fundsupermart tried (unsuccessfully) to change the insurance industry by offering cheaper insurance products through its online platform by giving clients a 50 per cent commission rebate, only to withdraw the promotion 3 days later due to external pressure from insurance agencies.

Read Also: Why The Fundsupermart Ruling Means Curbing Innovation In The FinTech Space Is No Longer Tolerable

Just last week, iFast Corporation Ltd, the company that runs Fundsupermart, announced that it has launched FSMOne, an online investment platform that aims to allow investors to invest in multiple products via one account.

These include stocks, bonds, ETFs, unit trusts (also known as mutual funds) and insurance. In addition, FSMOne also introduces robo-advisory portfolios, which is different portfolios that are offered to investors depending on their risk appetite.

The Value Of Fundsupermart

Though the FSMOne investment platform is new to investors in Singapore, Fundsupermart by itself is not a new brand. Many retail investors are already familiar with Fundsupermart, a brand that is synonyms with unit trust investing in Singapore.

The business concept of the old Fundsupermart is simple. Instead of heading to a bank and talking to your relationship manager over which unit trusts you should invest in, you can invest directly in the funds of your choice through Fundsupermart while reducing your transaction cost.

Moreover, with more than 1,000 unit trusts and over 200 Exchange Traded Funds (ETFs) offered by the platform, coupled with convenient access to information and research, it is easy to see why retail investors would prefer Fundsupermart for their investment needs.

The recently launched FSMOne aims to further improve what Fundsupermart provides. Instead of having separate platforms for funds, bonds and insurance, FSMOne allows users to invest in multiple products via a single account.

From the point of view of existing and new users, such a move appears logical, since our investment portfolio needs to be looked at in totality, rather than on a piecemeal basis.

Fundsupermart also becomes the first investment platform that reduces its sales charge on unit trust to 0% permanently, provide insurance rebate of 30 – 40% to clients, and allowing accredited investors to invest in bonds from as little as $5,000, up from the usual $250,000.

On top of that, they also allow consumers to buy individual stocks listed on both the Singapore and Hong Kong Exchange at an extremely competitive rate.

Just one day after launching FSMOne, the company announced that trades on SGX are no longer available until further notice. 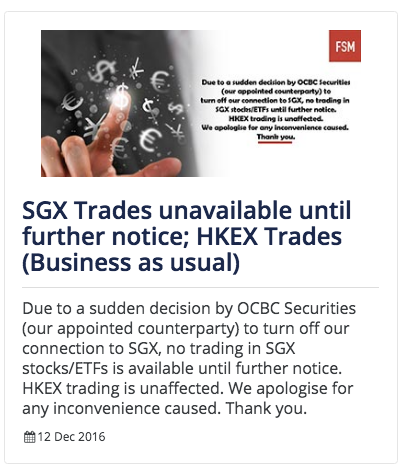 It is not difficult to understand what happened, and why it happened. FSMOne offers access to the Singapore Exchange for its consumers via its counterparty, OCBC Securities.

Since the trading of stocks is a core business for OCBC Securities itself, such an arrangement basically cannibalises OCBC Securities own business, as well as other brokerage firm in the industry. So while it’s surprising that a prior agreement between both companies was not reached before the launch of FSMOne, it is not completely unexpected that OCBC Securities is pulling out support for FSMOne.

While OCBC Securities pulling out was not ideal for FSMOne, this unplanned obstacle could actually work out better for them in the long run.

FSMOne has already received a fair bit of media attention (before this article) due to the pull out of OCBC Securities. This has created attention across the investment community, and seems to suggest that the offering from FSMOne is good and of worry to the incumbents who are trying their best to ensure that the status quo continues.

It is too early to say if FSMOne would be a game changer in the investment space, and whether they would be successful in disrupting the current market. However judging by the media attention they have already received since launch, it is certainly one to look out for.

Maybe You Don’t Have To Be Number 1
Salaries Are Expected To Go Up By 4.7% In 2017; But Should You Expect To Receive This?