Why Does The Bond Yield Curve Matter? 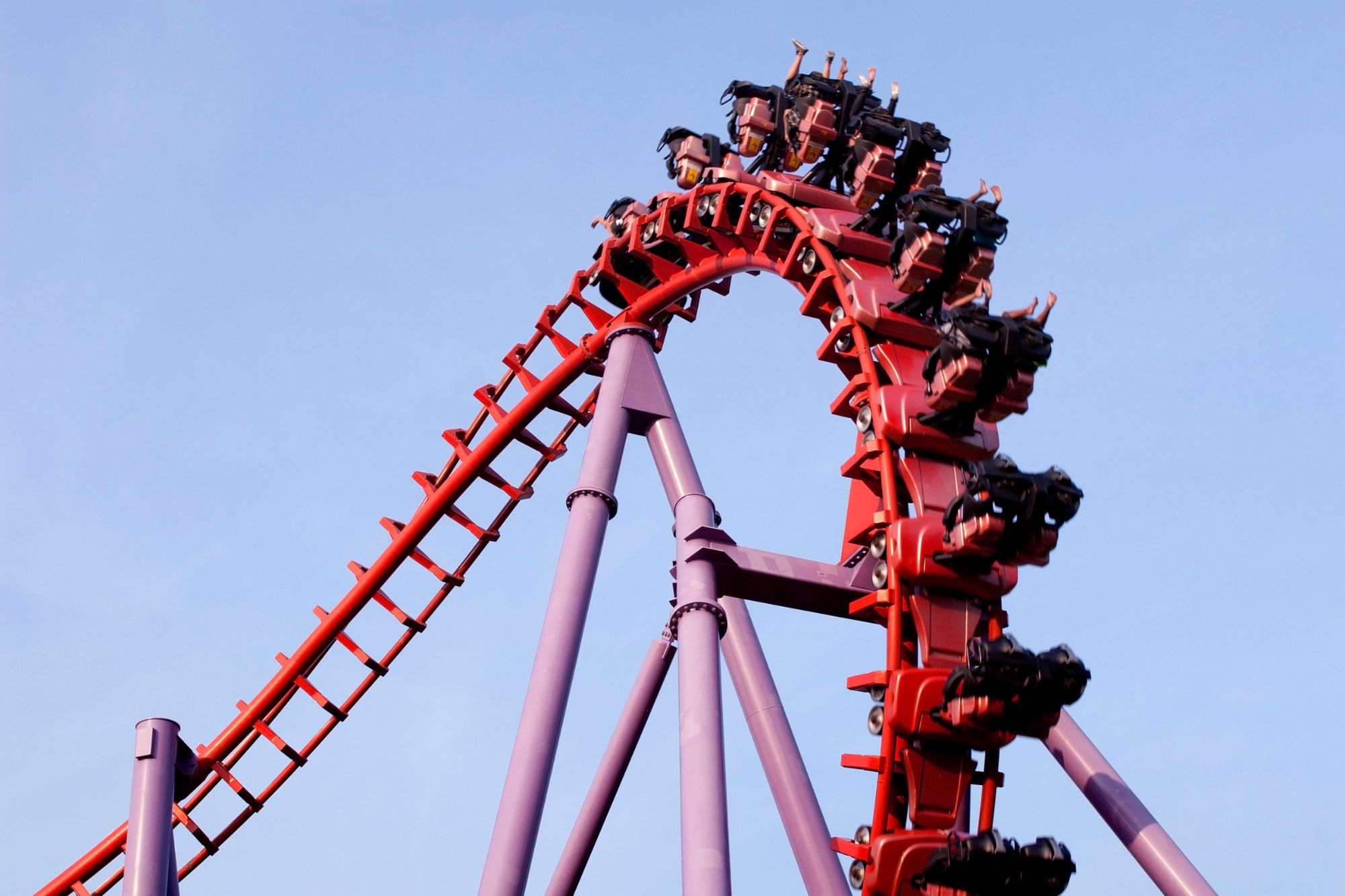 Bonds are sold by both countries and companies to investors so as to raise money for their financing needs.

These financial instruments are commonly found in most investors’ diversified portfolios, and are meant to provide a stream of regular income to investors.

To further explain the trillion-dollar global bond marketplace, here’s an explainer on bond yields and why investors watch the yield curve for signs of economic growth or contraction. For a fuller introduction to bonds, click here.

What Is A Bond Yield?

Simply put, yields are the future interest rates you’re expected to receive if you wait until the moment you get your principal and all coupons back at the maturity of the bond.

The yield to maturity (YTM) of a bond is the total rate of return on a bond, assuming that it is held until its maturity. This rate includes the principal payment, as well as regular coupon payments and takes into account the market price of the bond. While the coupon rate remains fixed, the YTM changes with the bond’s market price.

Here’s an illustration: Bond A’s principal or face value is $1000 with an annual fixed coupon rate of 5% and a maturity date set to exactly one year later (2023).

What Is A Yield Curve?

A yield curve plots the interest rates of bonds with different maturities by the same issuer, at a set point in time. Typically, these yield curves are plotted for sovereign debt, for example, the US Treasury bonds and notes.

The normal shape of a yield curve is upward sloping with bond yields increasing with the time to maturity, with the curve starting to flatten at the longest terms (30+ years), as seen in Figure 1.

The yield curve typically slopes upwards because bonds that offer a longer maturity will need to pay more — as represented by higher interest rates — so that investors are compensated for taking on more uncertainty that comes with owning longer term debt. 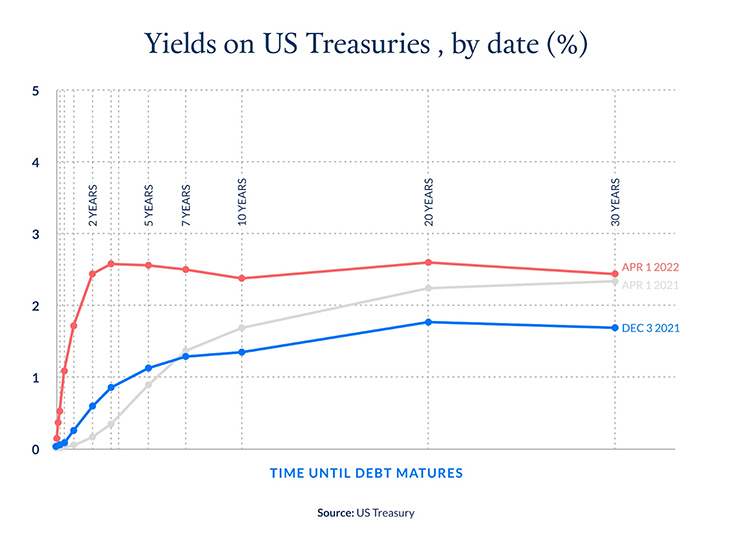 Why Do Investors Care About The Yield Curve?

When the curve starts to flatten, investors’ expectations have shifted to indicate that they are largely indifferent about holding a shorter-term bond versus holding a longer-term bond. That reflects a lack of clear belief that interest rates will increase in the future. The yield on a 7-year bond is now similar to the yield on a 10-year bond (referring to the blue curve on Figure 1).

On April 1, the two-year yield moved ahead of the 10-year yield. For the first time since 2019, investors witnessed this inversion of the yield curve.

The changes in the US yield curve reflect the growing fears of recession in the markets in 2022, and investors’ perception of falling interest rates in the future. Some market pundits have suggested that an inversion in the yield curve indicates a recession ahead.

In Figure 2 below, the US yield curves show clear signs of an inversion before the onset of a recession. 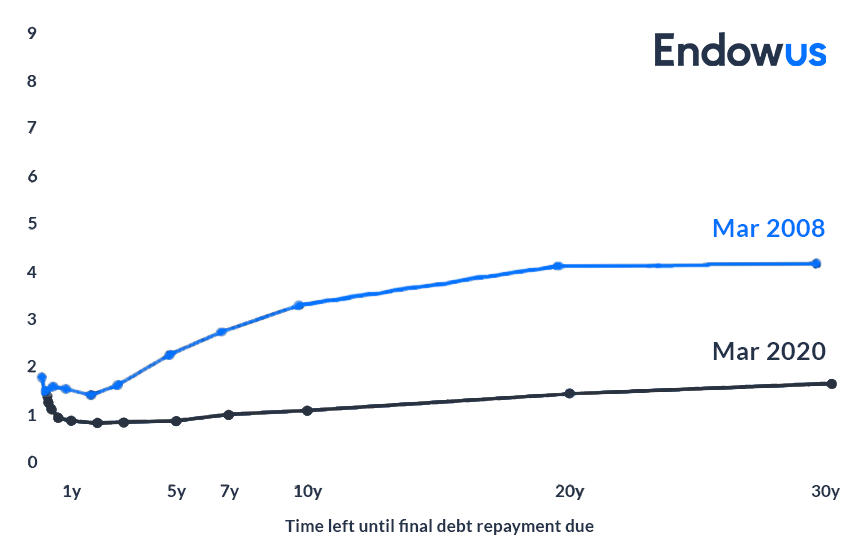 So, is the bond yield curve an accurate omen of a recession today? Reports suggest that the conclusion is not quite cut and dry.

In an April report, PIMCO noted that this current economic cycle is characterised by a sudden downturn in 2020 caused by the Covid-19 global pandemic. A rapid rebound followed, thanks to the unprecedented stimulus from central banks around the world.

In 2022, the Federal Reserve has begun withdrawing that stimulus, as it introduces rate hikes to cool surging prices. It will also start to unwind its bond-buying programme this year, in a process known as quantitative tightening.

“A yield curve inversion should never be dismissed just because the backdrop has changed. That said, the curve’s signal may be less clear than in the past,” says PIMCO.

To explain this, PIMCO noted that in the past, curve flattening would often occur later in a cycle when central banks raise short-term policy rates to hold back on growth and inflation. Short-term yields can rise to reflect these hikes, while long-term rates may fall as expectations for inflation and growth moderate.

This time, the flattening occurred quickly and well ahead of the first Fed hike. At the same time, inflation could continue to shoot beyond expectations, prompting the Fed to speed up how quickly it raises rates.

The Financial Times also wrote that as at June this year, the gap between three-month and 10-year borrowing costs – another closely watched indicator – has yet to turn negative. That’s because the three-month yield reflects today’s interest rates, which remain at rock-bottom levels for now. To add, the Fed’s decade-long quantitative easing programme that involved billions of bond buying, has, in FT’s words, “muddied the yield curve’s predictive powers”. In an April report, Morgan Stanley said it believes that the yield curve will stay inverted through 2022.

A report by Barron’s noted that Treasury yields also show off investors’ expectations of not just the Fed policy, but also inflation. When inflation expectations are stripped out, the yield curve hasn’t inverted on a “real yield” basis, and has kept its upward slope.

For further context, the past three inversions — which were all followed by recessions — also involved the “real yield” curve fully inverting in 2019 and 2006, and almost perfectly flat in 2000. What this means is that there remains a possibility that the Fed can avoid a recession while keeping inflation in check.

In short, while the yield curve inversion had once been the proverbial canary in the coal mine, the confluence of factors today — including swift changes in Fed policy, the QE unwinding process, the Russia-Ukraine war, and a global pandemic into its third year — means that it should not be the single indicator of an economic downturn ahead.

Read Also: Buy The Dip Or Run For The Exit? What To Do When The Stock Market Crashes?

If you’re interested to start investing with Endowus, you’ll be happy to know that DollarsAndSense readers can enjoy $20 off their access fee till (equivalent to $10,000 advised free, assuming an Access fee of 0.40%). Sign-up using this link to claim this special offer. Terms & Conditions apply.