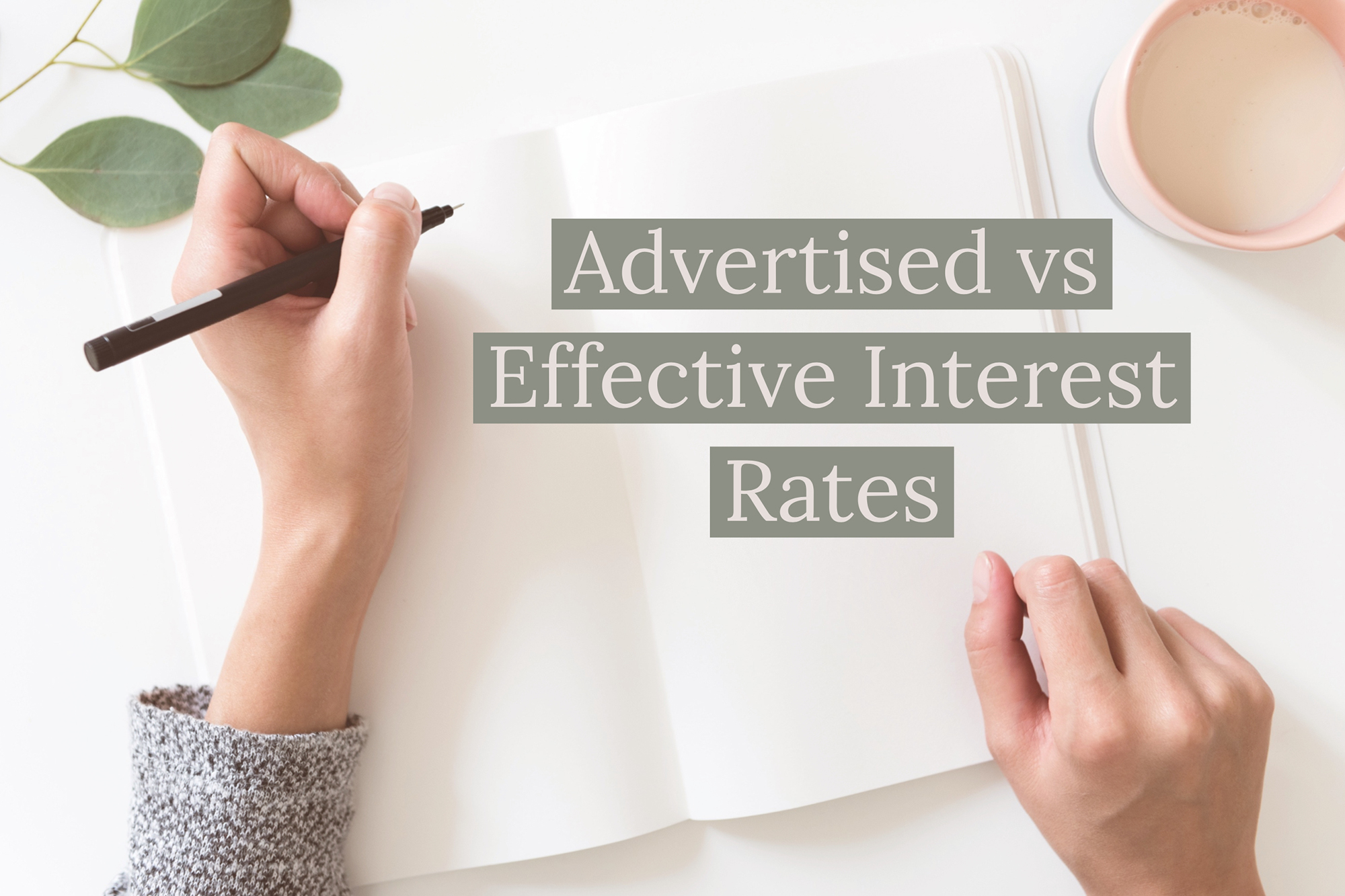 Whenever a loan is being taken, we realise that many people are confused about the interest rate that they are paying. There are a few reasons for this.

In this article, we will explain the key differences between the two, what most people are confused about, and why this matters if you are intending to take a loan.

Let’s Start With A Hypothetic Example: Borrowing From A Friend

To understand the concept of advertised interest rate vs effective interest rate, let’s first take a look at a hypothetical example where we borrow money from a friend.

Because neither of us are financially savvy, we may simply agree that the interest payment can be made either at $100 per month, for 12 months, or $1,200 at the end of the year. We think it’s the same thing (it’s actually not, but for now, let’s just assume it is).

Here’s an example of how the repayment schedule could look like.

But what happens if a bank wants to earn the same amount of interest?

Read Also: 3 Occasions When Compound Interest Can Work Against You

What Is Advertised Interest Rate

If a bank wants to earn the same 10% interest, there are two possible scenarios in which they can lend us money.

Sounds simple? As it should be.

Scenario B: The bank lends you $12,000 for one year at an interest rate of 10%. They expect a monthly repayment of the principal plus interest over the next 12 months.

The only difference is that in Scenario B, repayment of the principal and interest is made over a period of 12 months, as opposed to one lump sum at the end of the year.

By using this repayment method, we can calculate our effective interest rate to be 10.47%, and not 10%.

What’s more interesting and worth noting is what the advertised interest rate will be.

Hence, we get the following.

Wait…Why Is The Difference So Much?

This huge difference is likely to surprise many who are not familiar with how interest rates are usually calculated for loans.

The reason for this is because even though the bank originally loans us $12,000, we don’t actually have the sum of money for the entire year. From the first month onwards, we are repaying the principal amount borrowed, with interest, to the bank. By the six-month, about half of the loan amount has already been repaid.

The banks use what could be considered by some as a slightly flawed method to determine the advertised interest rate because it uses the total interest payment made, and divide it against the amount that it lends you at the start of the loan period.

This Is Kind Of Complicated. As A Borrower, What Do I Have To Know?

Thankfully, according to the Code For Advertising Practice for Banks in Singapore, any interest-bearing loan must include the effective interest rate. This can be a life-saver, since calculating it involves a really tedious process which includes a complicating mathematical formula.

The effective interest rate on a loan takes into account additional fee such as processing fee and any other service fee which the banks charge us. In other words, it’s the interest rate which you actually pay for taking the loan.

Logically, you should always choose a loan with the lowest effective interest rate. This is because you will be using your money in the most economical way. Advertised interest rate stated may not be very useful making comparisons, as they can be calculated using various methods, some of which may not make much sense.

Read Also: Warning: Do NOT Bank In These “Cheques” You Get From The Banks!

Why Are There 2 Different Red Bull at Different Price Points?

Having Trouble With Debts in Singapore? Here Is Your Roadmap To Clearing Your Debts
My Credit Card Score Sucks – Here Are 4 Mistakes Young (And Financially Responsible) Singaporeans Are Making