The first two weeks of May will see two consecutive short weeks for the markets. While this may diminish market activity, it provides a good time for reflection after the flurry of results release and Annual General Meetings.

Our 4 Stocks This Week column continues to cover stocks of interest in the market and those that our friends and readers have brought to our attention. If you come across such companies or have interesting ideas, do give us a shout out and let us know why which companies these are via our Facebook page or email.

Market watchers have come to terms realising geopolitical risks will continue to persist globally. This translated to a rise in buying confidence which pushed the Morgan Stanley Capital International (MSCI) All Country World Index (AWCI), an index made up of 23 developed markets and 23 emerging markets worldwide, to yet again break new highs during the week. It rose about 1.0% to end at 459.17 on Friday (5 May 2017).

In Singapore, the SGX announced that market turnover for securities was $21.6 billion in April. While this represented an improvement of 2% from a year ago, it was 26% down from March 2017. Broadly, the Straits Times Index (STI) mimicked the rise in equities globally ending 1.7% higher at 3229.73 on Friday (5 May 2017). Notably, the STI broke new 52-week highs again, and has not been at these levels in the last 22 months, since the end of July 2015.

With a market capitalisation of more than $250 million, Capital world made its debut on Singapore’s stock market on Friday (5 May 2017). Based in Johor, the company is an integrated property developer focusing on joint ventures with landowners to enhance the value of land assets. This strategy minimises its capital outlay for land acquisitions.

The company, which was listed through an RTO (Reverse Take Over) of marble company Terratech, began trading at $0.198 and closed approximately 8.1% down after ending the day $0.016 lower at $0.182.

Regional food and beverage group, BreadTalk Group, released its 1st quarter 2017 results on Wednesday (3 May 2017), announcing a 337.2% rise in net profit to $10.7 million from the year before. This was primarily a result of its cost control measures.

This was despite a 4.5% reduction in its revenue to $147.6 million, mainly due weaker Chinese business in both its Bakery and Food Atrium Division, and stable Restaurant Division in Singapore.

Also Read: Why Establishing A Strong Portfolio Of Brands Such As Ajisen Ramen & Menya Musashi Is Similar To Investing In The Stock Market

On the back of a $9.3 million net capital gain on its divestment of TripleOne Somerset, BreadTalk Group also announced a special dividend $0.02 per share. 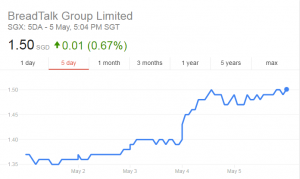 Revenue from its Mobile and Pay TV business took a hit during the quarter, posting reduced contributions of 0.6% and 6.8% to $296.2 and $88.4 million respectively. This was offset by better performances in its Broadband and Enterprise Fixed business which raked in 0.5% and 2.9% higher revenue to $53.7 million and $98.7 million respectively. In addition, Sales of equipment also improved 13.7% contributing 55.3 million in revenue.

Also Read: How Going For SIM-Only Plans Can Help You Save On Your Mobile Bills

In the past week, its share price declined less than 1.0%. Looking further back, it has declined 1.4% and 11.4% in the year-to-date and past 52 weeks respectively. 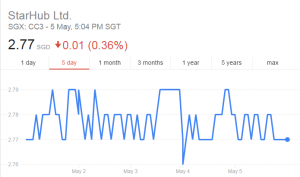 Also Read: How REITs Performed in 2016

It put in a solid performance, with 6.4% increase in revenue and 18.2% increase in distribution per share of $0.013. This was achieved on the back of better revenue from its Crowne Plaza Changi Airport Hotel within its Hospitality segment, slightly offset by lower contribution from Mandarin Orchard Singapore. In its Retail segment, revenue from Mandarin Gallery rose 12.3%.

In the past week, its share price stayed constant. In the year-to-date and in the past 52 weeks, it has returned 9.1% and 14.2% respectively. 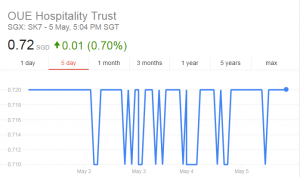 Why Are Rolex Watches So Expensive?
These 10 Listed Companies In Singapore Pretty Much Own Everything: (Part 1: 6-10)