Our 4 Stocks This Week Column takes us through a hectic reporting season this week. This is the period when most companies report their quarterly or full year results. This makes it very difficult for to choose only four stocks to feature, but we have gone ahead with those that interest us the most.

While our list of interesting stocks may differ from yours, we encourage an open discussion to why you were more interested in other stocks. You can do this via our comments section or our Facebook post, and this will also help other readers.

This positive sentiment comes on the back of a strengthening U.S. market, which continues to show confidence of a Trump presidency.

Here are the four stocks which caught our attention this week.

Keppel Corporation released its results Thursday (26 Jan 2017) and it was not a good one. Operating in a tough business environment, Keppel Corp announced an uninspiring set of results for 2016. Its revenue fell approximately 34.3% to $6.77 billion from $10.30 billion in 2015, with all its business segment witnessing weaker sales – Offshore and Marine (-54%), Property (-12%) and Infrastructure (-14%).

Looking ahead, it issued a press release stating it had been awarded the contract to build Singapore’s fourth desalination plant in Marina East, signing a 25-year water purchase agreement with PUB. Further, its Property business has a strong pipeline of properties in China and Vietnam through 2019 to bolster the segment. International Healthway Corp, or IHC, has had an interesting week to say the least. On Monday (23 Jan 2017), it held its Extraordinary General Meeting where its entire board was voted out by shareholders. It then requested for a trading halt and subsequently, on Friday (27 Jan 2017), for a voluntary trading suspension as it needed more time to assess the current state of affairs at the company and its subsidiaries. Further complicating matters, the police were even call in when a former executive director was seen carrying her computer and some documents out of the office.

Activist shareholders from Oxley Holdings had petitioned for the ousting of the current board saying developments at the company was “worrying”. This may be based on its lacklustre share price performances and differing thoughts on the company’s capital and business management.

It will be interesting to see what happens next. Operationally, in IHC’s third quarter results, it posted a 19% increase in revenue to $38.4 million but a 68% decline in net profit to equity holders to $9.3 million.

Apart from the “excitement” to follow, there is not much to report on share price movement this week due to the trading halt. Looking further back, the company’s share price is exactly where it was a year ago, at $0.07. 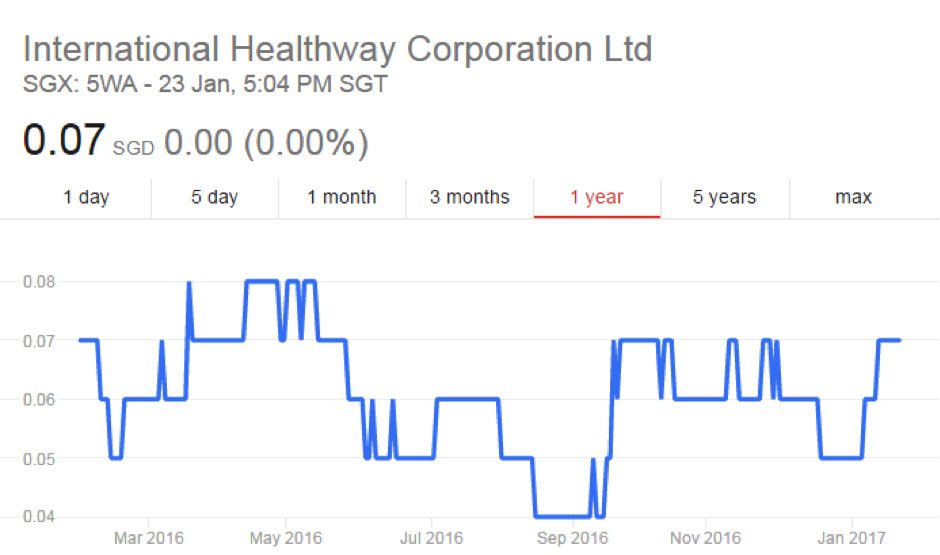 M1 was another company that released its results for 2016 on Tuesday (24 Jan 2017). It reported an 8.3% decline in operating revenue to $1.06 billion from $1.16 billion in 2015. This was mainly due to lower telecommunications revenue and international calls services.

Aside from its sluggish operations, its share price has also taken a beating with a fourth local telco expected to enter the fray soon. As the smallest of the current telco operators, its business is expected to be most impacted.

DBS issued a report on Wednesday (25 Jan 2017) calling for a “Hold” position on the stock, with a 12-month price target of $1.97, a shade shy of its current $2.05. It too expects a fourth entrant to cause some difficulties to M1, and the other telcos.

During the week, M1’s share price stood firm until the release of its results. After which, it dipped 2.9% on Wednesday (25 Jan 2017) to $2.05 from $2.11 at the start of the week. Looking slightly further back though, M1’s share price has declined almost 29.1% since its 52-week high, which was in July. This could be a worrying trend for shareholders. 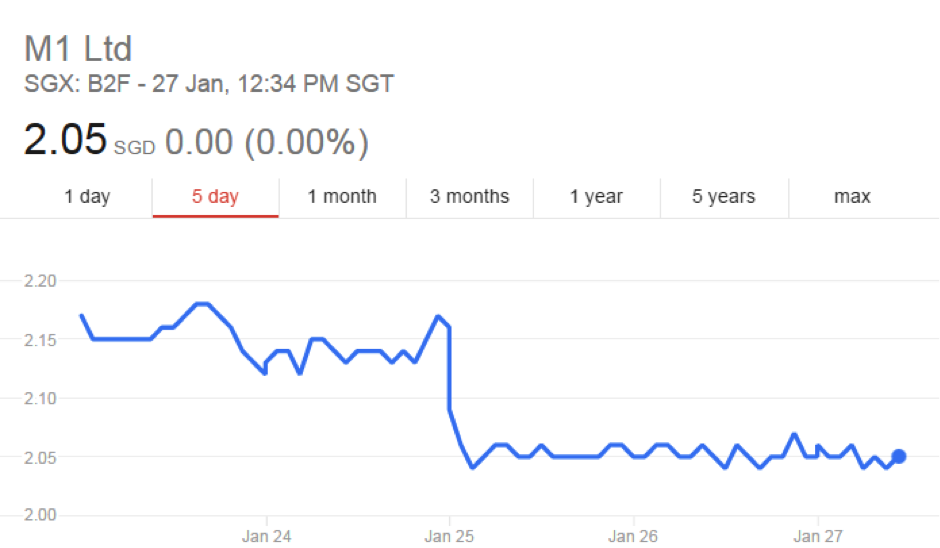 DBS announced that it will be releasing its 2016 results on Thursday (16 February 2017), making it another likely candidate to feature in future editions of this column.

The main reason for DBS’ price appreciation in recent months can be attributed to the impending rate hike by the U.S. Federal Reserve. As one of the largest banks in the region, DBS is expected to be in a prime position to benefit from the interest rate hike.

Coupled with this, President Donald Trump’s election win on 8 Nov 2016 is expected to hasten such a move. DBS’ sharp share price rise exactly coincides with this (see 1-year chart below the 5-day chart).

Keep a watch on DBS’ share price in the lead up to its results announcement in the middle of February. 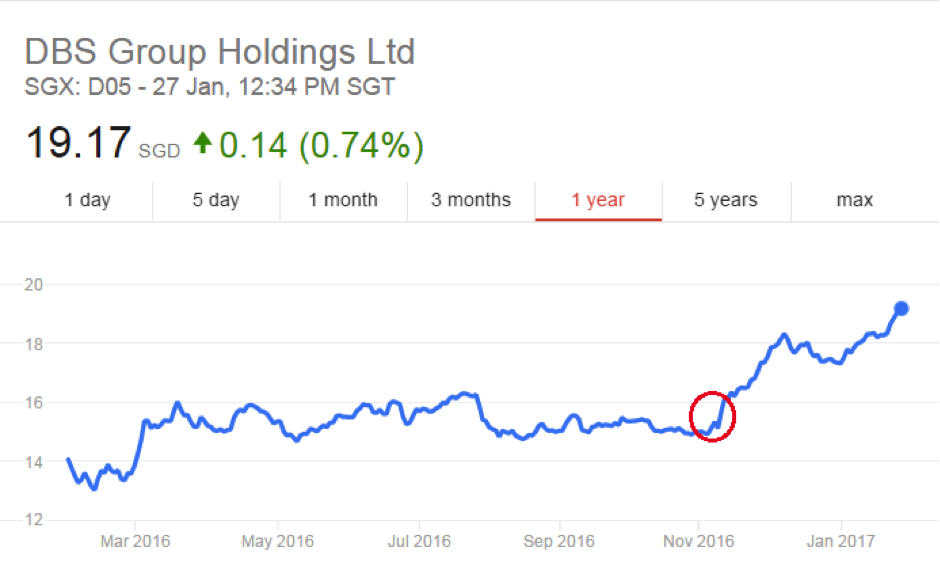 How A 30-Year Old Saving $100 A Week Can Retire With $648,000 By 65
If You Start Investing Today, How Much Will You Have For Retirement? This Table Shows You All You Need To Know