In this week’s column of 4 Stock This Week, we look at four stocks that have caught our attention during the week.

We choose the stocks to look at based on our conversations with people in the industry, the updates these companies give us, available literature online as well as other sources. We also like to invite our readers to highlight stocks that have interest them and to let us know why. This will greatly benefit other readers as well. You can discuss it with us on Facebook, or simply leave a comment in the comment’s section at the end of the article.

Another important thing to note is that many more companies will start releasing their financial results in the coming weeks, and investors should stay tuned.

Read Also: Value Investing Or Index Investing? Which Is The Better Investment Approach?

The Singapore Exchange, or SGX, announced a positive 2nd quarter result on Thursday (19 Jan 2017). In it, SGX posted a 3% improvement in revenue to $200 million and a 5% increase in net profit to $88 million. SGX also said that it will give out an interim dividend, which remains unchanged from a year ago at $0.05.

The best part about this set of results is that there was more activity in the market with SGX’s equities and fixed income revenue increasing 6.3%. This was a much-needed boost given that some critics were raising concerns that the exchange was losing relevance.

The silver lining was that there was a 17% increase in the daily average traded value of securities. There were also approximately three times as many bond listing this quarter compared to the same period last year.

However, there were only two new companies that listed on the exchange this quarter compared to five in the same quarter last year. SGX’s revenue from its derivatives business saw a decline of about 3.4%.

Another milestone for SGX was acquiring the Baltic Exchange during the quarter. Being a maritime hub, it perhaps makes some sense, however, the acquisition will not make a significant impact on its results going forward given that its FY2015 revenue and net profit came in at £6.03 million and £1.34 million respectively. 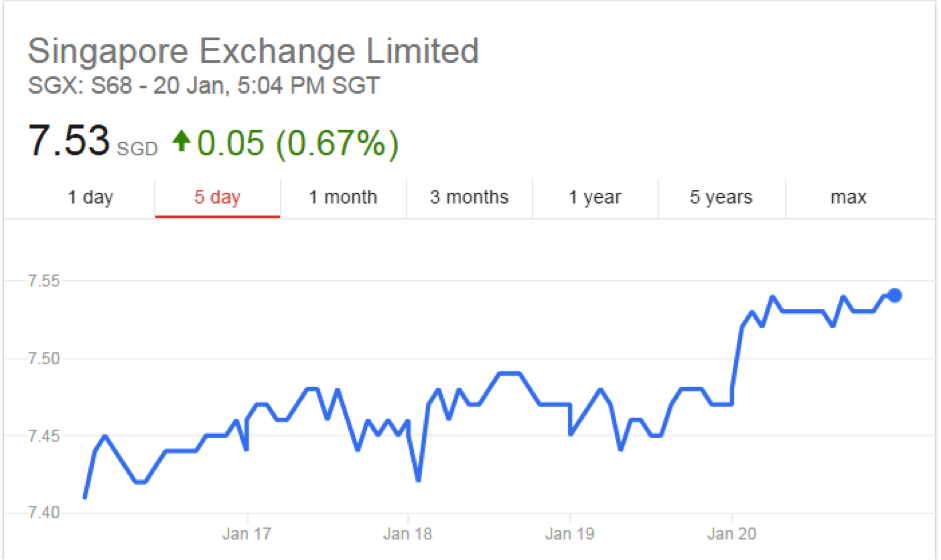 Another company that released its results was CapitaLand Mall Trust, or CMT, Singapore’s first and largest listed REIT. Released on Friday (20 Jan 2017), CMT announced that its distribution per unit for its 4th quarter will remain unchanged from a year ago at $0.0288, or 2.88 cents. This will take its overall distribution per unit for the year to $0.1113, or 11.13 cents, translating to a 5.82% yield based on its closing share price of $1.98 on Friday (20 Jan 2017).

CMT’s gross revenue increase 3.1% to $689.7 million. This was mainly due to the acquisition of Bedok Mall and higher rents received from several of its properties after enhancement works, and offset by closure of its Funan Mall for redevelopment and sale of its Rivervale Mall in Dec 2015.

With 16 properties worth over $11.1 billion, CMT delivered a relatively positive result that showed a 98.5% occupancy rate in addition to a 2.3% increase in shopper traffic and 0.9% increase in sales per sq ft per month. This highlights that the retail sector is not in the doldrums and REITs in this space still have the ability to deliver strong results.

For the week leading up to its results release, CMT’s share price remained relatively stable, decreasing 0.3% from $1.99 to $1.985. 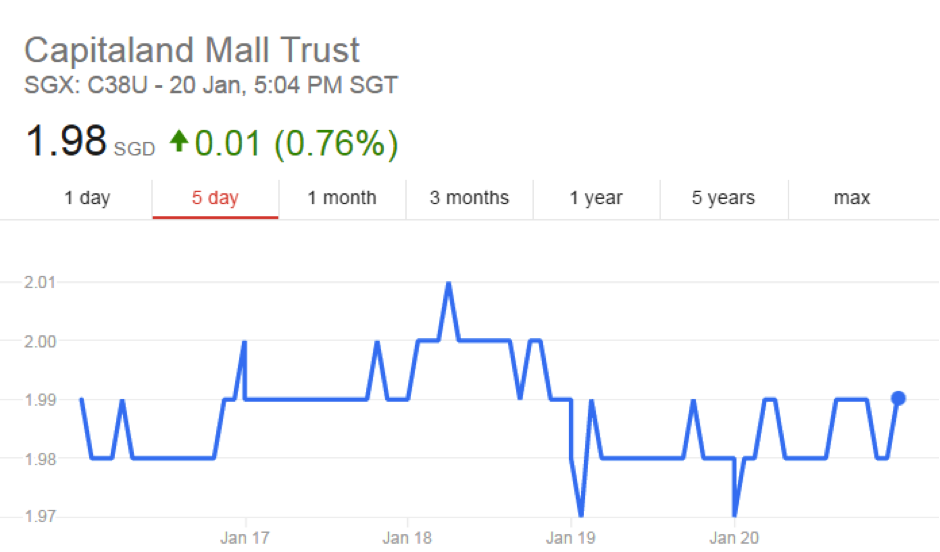 Dasin Retail Trust is a kid on the block, debuting on Singapore Exchange this Friday (20 Jan 2017). It is now part of three Singapore-listed retail trusts focused primarily on the strategic Chinese market.

Capturing our attention as the first Mainboard listing in 2017, Dasin Retail Trust’s IPO was 7.6 times oversubscribed and offers local investors the opportunity to participate in the lucrative Chinese consumer market.

Owning three retail properties in China, the trust has set provisions to acquire a fourth retail property by 2017. It has also projected to deliver a distribution yield, based on its IPO price of $0.80, of 8.5% and 9.0% in FY2017 and FY2018 respectively.

With its award-winning sponsor, Zhongshan Daisin Real Estate, the trust also has an extensive pipeline of potential properties to acquire in the future.

What caught our attention to this stock was an SGX query regarding trading activities of its shares on Wednesday (18 Jan 2017). Local brokerage house, KGI, then issued an unrated report on the company the next day.

Civmec, an Australian-based integrated construction and heavy engineering services company, is primarily focused on the oil and gas and mining industries. On 1 Dec 2016, its share price was $0.34, today, it is trading at $0.64, roughly 88.2% higher.

In the KGI report, the brokerage house states that despite this stellar rise in price, it sees further upside from increased order wins and improved bottom line performance in the next few quarters.

In its response to SGX’s query, it announced on Thursday (19 Jan 2017) that it had signed an MOU (Memorandum of Understanding) with another Singapore company outlining joint participation in a defence project in Queensland, Australia. It did not announce this MOU as it was still in its preliminary stages and did not consider the news as material.

Outlining its strategy to drive its business forward, Civmec has boosted its orderbook with new contracts by diversifying into infrastructure, utilities, defence and power-related projects. On the back of new contracts worth close to $171 million, KGI estimates its current orderbook to be about 40% higher than what it was on 8 Nov 2016.

Civmec’s plans to penetrate the defence segment in Australia with an $80 million investment in a shipbuilding facility in Perth, situated close to existing facilities and over half of Australia’s naval forces. It also recently hired the former Royal Australian Navy Commodore, Mike Deeks, to lead this business.

The company also intends to tap into the growing infrastructure segment. This is because the resource boom era is close to its trough right now. Over the next 10 years, Australia’s is estimated to spend more than A$800 billion on infrastructure, oil and gas, metals and minerals and defence projects. And over 55% of it will be in infrastructure-related projects. 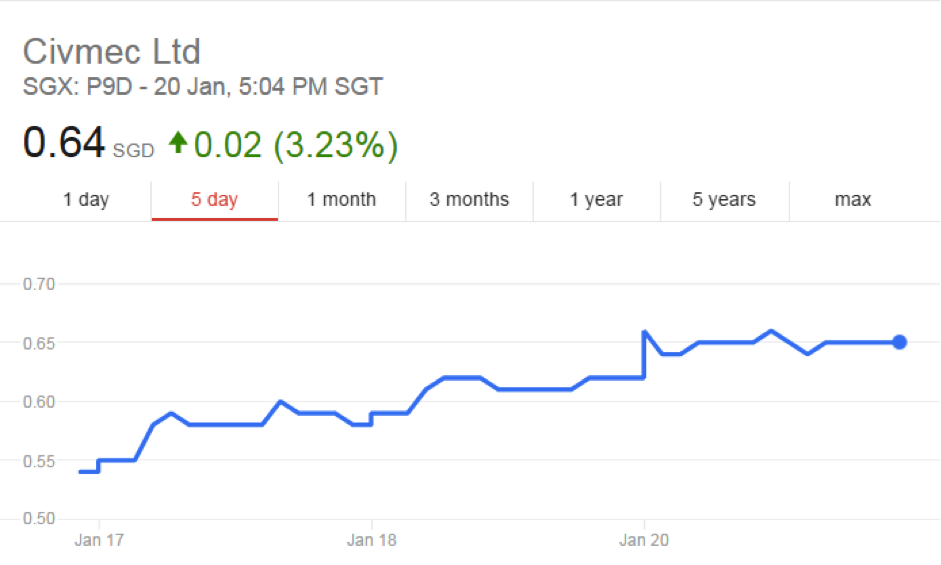