How Much Data Does Pokémon Go Really Use? Find Out The Hard Data Truths About Your Relationship With Pokémon Go

Find out how much data you are using. 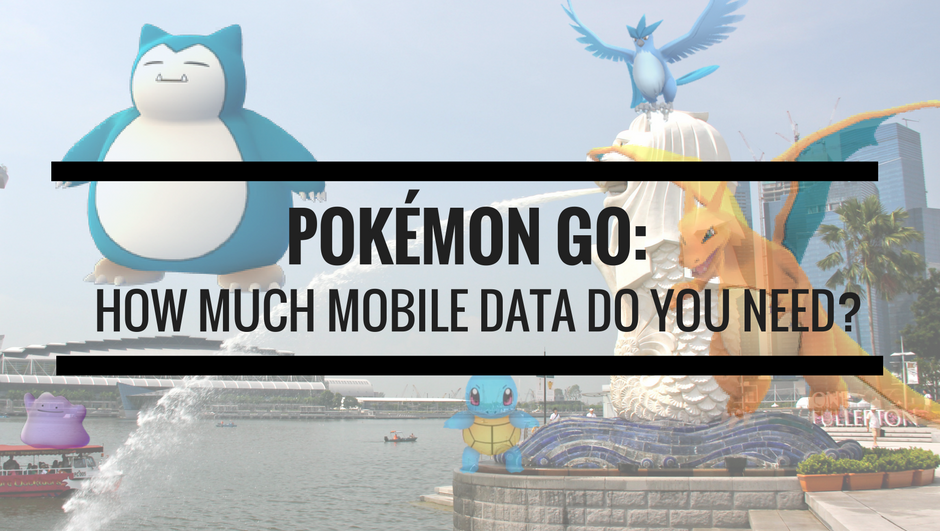 Pokémon Go is a free-to-play mobile app. You download the game on your phone and then head out to locate, capture, train and battle other Pokémon.

Since Pokémon Go is a location-based game, users need mobile data on their phones to play it.

The two most important questions on many people’s mind (including ourselves) are just how much mobile data do you need to play Pokémon Go, and what your bill might come up to at the end of the month?

How Much Data Are Singaporeans Using when they play Pokémon Go?

World averages show that playing one-hour of Pokémon Go requires anywhere between 5 MB to 20 MB per hour of gameplay. Well, that is pretty reasonable, right?

Ah! But it gets interesting when people spend extended amounts of time playing the game when they are not on Wi-Fi connection.

To get a better sense of just how much mobile data Singaporeans are already using playing the game, we did a poll among Pokémon Go players in Singapore.

Poll Among 58 Pokémon Players In Singapore

All 3 respondents from Group 1 who have used more than 1 GB of mobile data in the first week reported playing the game for an average of more than 5 hours each day. In contrast, among the players from the same group who played about 1-2 hours each day, 10 out of 12 players reported a usage of 200 MB or less.

What The Poll Results Tell Us?

What we found out is that in general, Pokemon Go does not take up an insane amount of mobile data. This is similar to what has already been reported from players in other countries where Pokemon Go was launched earlier. On average, players can expect to use about 10 – 20 MB per hour of play.

If your relationship with Pokémon Go is casual (i.e. you are a leisure player who plays no more than 2 hours a day, usually when you are taking the public transport), then your data consumption should remain manageable. You might consume about 20 MB of data per day (10 MB per hour), which adds up to about 600 MB each month.

However, if you are in an intense relationship with Pokémon Go and spending lots of time (i.e. 4 hours or more each day) with the game. Then there might be reasons to start taking a closer look at how much data you are using for the game. Based on a usage of 40 MB a day (10 MB per hour), you could be looking at a hefty 1.2 GB (or more) of mobile data being used each month for the game.

Even with the small sample size, the simple observation here is that Pokemon Go, on average, would not use too much mobile data for most people unless they are playing it intensively.

What Can Die-Hard Pokémon Go Players Do About It?

One way of ensuring that you do not exceed your data bundle each month would be to obviously get a life and reduce your active playtime for Pokémon Go. But we know not every player would be able to accept such a course of action!

Tip 1: Connect To Wi-Fi Whenever It Is Available

This is a no-brainer. Whenever you are out, look for an available Wi-Fi connection. When you go to your friends’ home, get their password and connect to their Wi-Fi.

Singtel Mobile customers on Combo 2 and above plans, Easy Mobile M and above and SIM Only plans can enjoy unlimited Singtel WiFi from now till 31 March 2017.  Singtel WiFi gives you unlimited data usage with reliable connectivity of up to 5x the speed of typical regular WiFi services and it is available at more than 900 hotspots islandwide.

Tip 2: Turn Off Other Apps

If you are playing Pokémon Go, there is no need for you to have other mobile applications running in the background. This helps reduce mobile data usage since your additional Pokémon Go consumption would be offset by the reduction of data usage in other applications such as Facebook and WhatsApp.

If all else fails, the other alternative would be to consider increasing your monthly data bundle and get either a SIM Only Plan, DataMore or DataX2.

For example, existing Singtel customers have the option of selecting from a variety of data add-on tiers through DataMore to their current mobile plans.

The usual retail price for local data is $10.70/GB. So using the DataMore Add-gives you additional data at a cheaper cost. Sign up now to enjoy free subscription for 3 months.

Alternatively, if you are signing up or re-contracting a postpaid plan, you could double your monthly data bundle for just $5.90/month with Singtel DataX2. For example, if your current mobile plan gives you 12GB of local data each month, you can double it to 24GB for just $5.90.

Another good (and cheap) alternative for more mobile data would be to go for the SIM Only Plan offered by Singtel.

If you sign up for 12 months, you will enjoy 150 minutes talk time and 500 SMS for free. This is on top of the 5GB of data that you would already be getting.

With that to rely on, we are confident that your data requirements for Pokémon Go and any other apps would be covered in the foreseeable future!

The best part about the Singtel SIM Only plan is that you can adjust your plan anytime. For example, if you need more data because you will be out and about this month, you can increase your bundle.  You can reduce the data bundle in the following month to reduce your bill.

Don’t get caught out while you are caught up catching ‘em all!

This article was written in collaboration with Singtel. All views expressed in the article is the independent opinion of DollarsandSense.sg