5 CEOs Who Are Earning Less Than The Average Singaporean

5 CEOs that draw a lower salary than you do. 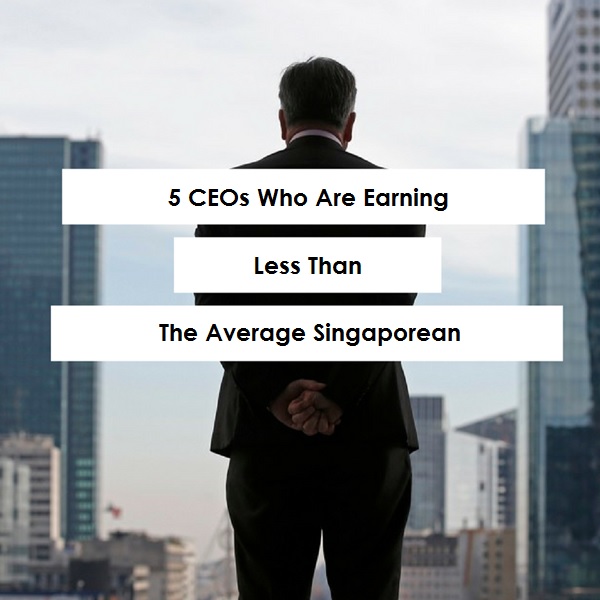 While many executives of huge local corporations are under siege by netizens over their lofty pay cheques, there are some high-powered CEOs who are receiving a salary much lesser than the average Singaporean.

The 5 CEOs in this article are opting for a pay cheque of $1 a year or even nothing despite being worth millions, if not billions.

According to the California Law, Tesla CEO Elon Musk, whose net worth is valued at an estimated $13 billion, should have a minimum wage of $37,000. However, out of the pay cheque of $37,584 that he was entitled to, he took nothing.

In fact, Elson Musk has never accepted any pay cheques or any other forms of remuneration, which includes bonuses, stock rewards or any form of compensation from his company.

The Facebook CEO’s half a million pay cheque in 2012, was almost twice of what the next highest paid CEO was earning. However, in 2013, Mark Zuckerberg went from receiving a base salary of $500,000 to only $1 per year.

With a current net worth of $.4 billion, Mark Zuckerberg revealed that the rationale behind his $1 pay cheque is that he had made enough and he is just focused on making sure that he does as much good as he can, with what he has.

Larry Page and Sergey Brin founded Google while they were graduate students at Stanford University in 1998. Since then, Google has become one of the most valuable companies in the world.

Both Brin and Page asked for their base salary to be at $1 and refused any form of compensation made by Google’s compensation committee. Page’s net worth is currently valued at $38.6 billion, while that of Brin is valued at $37.8 billion.

Kosta Kartsotis is the CEO of the Fossil Group and yet hardly anybody knows what he looks like. His refusal to share his photo to the media and even in his company publication makes him one of the most camera-shy CEO ever.

Kosta Kartsotis has taken no salary since 2008 and his net worth is reliant on the performance of his high-fashion watches and jewelry company which is valued at $7.9 billion, of which he owns approximately 12% in stocks.

There is, however, a rationale behind why these high-power CEOs are drawing little to no salary. Most of these CEOs’ sources of compensation comes in the appreciation of his company. By drawing little to no salary, it shows that they are on a look out for their shareholders and are giving themselves to the company such that they are willing to lose income if their company does not perform.

How Much Data Does Pokémon Go Really Use? Find Out The Hard Data Truths About Your Relationship With Pokémon Go
What Happens When You Can’t Get A Good BTO Flat?