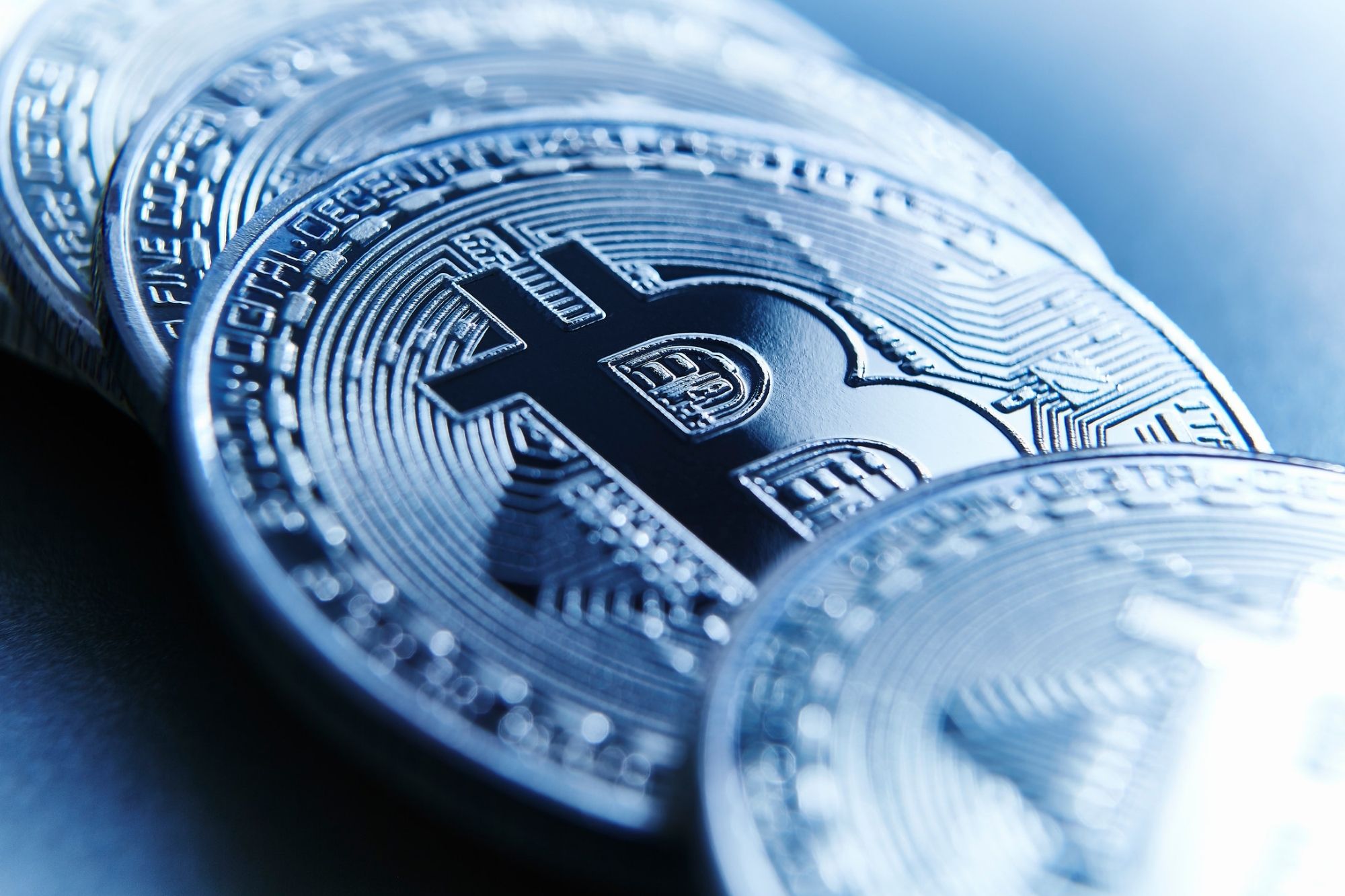 This article was written and published on 31 March 2021. Republished with permission from Ken Chia, author of Bridging Bitcoin.

A skeptic by nature myself, I generally question almost everything and remain a non-believer until proven otherwise.

Bitcoin has its long list of skeptics including the likes of Warren Buffett (“rat poison squared“), Jamie Dimon (“Bitcoin is a fraud“) and Peter Schiff (“Bitcoin is fool’s gold“).

Several have since “graduated” from this list and are now Bitcoin converts including Niall Ferguson, Don Tapscott, and especially Raoul Pal, who once stated that “Bitcoin is Mania” back in 2017.

Something must have changed. What myths were dispelled along their journey?

When the price of an asset soars beyond the ordinary, skeptics react by shaking their heads and pithy “this won’t end well… this is obviously a bubble waiting to pop”.

Then three years later, in an almost identical fashion to 2017, Bitcoin would soar six-fold in price within a span of six months between Oct 2020 – Mar 2021. 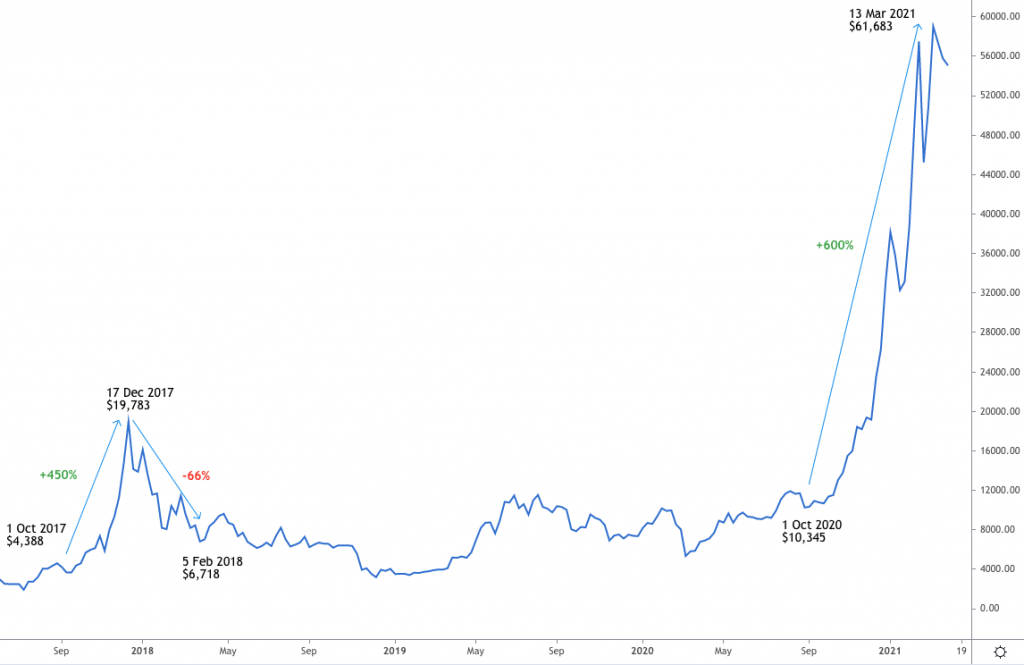 Surely we are at “peak bubble” now? What comes next?

But what if it is NOT a bubble? What if, just like during the first few years the Internet was introduced, its potential to the world was largely ignored? 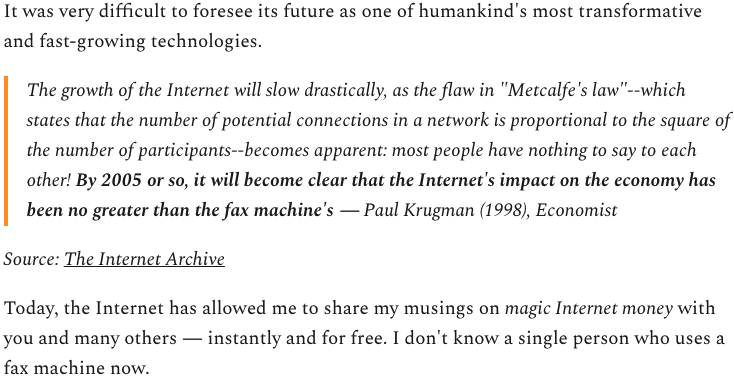 From Bitcoin: Gradually, Then Suddenly

Ignored because it was just too new; too alien a concept for its time?

What if, it is actually a bigger risk to not invest in Bitcoin?

“Skeptics compare Bitcoin to fiat currency, often pointing to price and volatility. The real story is that cryptocurrencies are not a replacement for the dollar, but a part of an alternative financial system” ⏤ Ozchen.com

What if we are on the cusp of yet another revolution? The rapid growth in distributed value networks, starting out as an alien concept to the world similar to the advent of distributed information networks (Internet), giving birth and rise to a completely new and alternative financial system altogether.

The Internet of money.

But why Bitcoin? Bitcoin generates no cash flows, it is not (yet) universally recognized as an institutional asset class ⏤ the damn thing is not even physically tangible.

It seems so arbitrary, so abstract. Yet once you see it, it is so clear.

Bitcoin did not emerge via an IPO (or SPAC). Its founder never cashed out. Till today, Bitcoin’s founder and its design origins remain a pseudonymous mystery.

Yet this magical internet coin has appreciated greatly in monetary value over the past decade.

In some ways, Bitcoin does have no intrinsic value ⏤ and perhaps that’s a good thing.

It doesn’t need it. Just like traditional money, all that matters is society’s collective faith in its value.

Bitcoin’s appreciation is entirely based on how effectively it preserves or enhances value over time. It did not need to preach for adoption, because its design naturally encourages adoption.

Bitcoin derives it’s value purely from its predetermined and immutable monetary policy, one that has been set over a decade ago. One which involves a fixed supply of bitcoins forever, instead of one that prints more as central authorities see fit. The price of Dutch tulips crashed and never recovered after a six-month long bubble in 1637.

Bubbles are not marked by a multi-year recovery and new highs.

“But it sure has been one hell of a volatile ride”, one would say…

Myth #2 – Bitcoin Is Too Volatile

No matter the time frame analyzed, Bitcoin is still perceived as a volatile asset class.

Bitcoin is about a decade old, which means it is still largely in price discovery mode.

To put into perspective, Bitcoin is an extremely young and nascent financial asset compared to past global reserve currencies, for example ⏤ historically each lasting around 100 years or so.

“A lot of volatility is natural when market participants are trying to forecast whether bitcoin is (i) a speculative bubble that will implode and be worthless, (ii) a digital scarce asset that could replace gold as a store of value, or (iii) a monetary architecture that will serve as the core trust and verification layer for numerous types of transactions” ⏤ Kjell Inge Røkke, billionaire investor and chairman of Aker ASA

Compared to Bitcoin’s favourite cousin, the yellow shiny rock that the world has come to treasure (read: gold) has been volatile too over the course of its history: 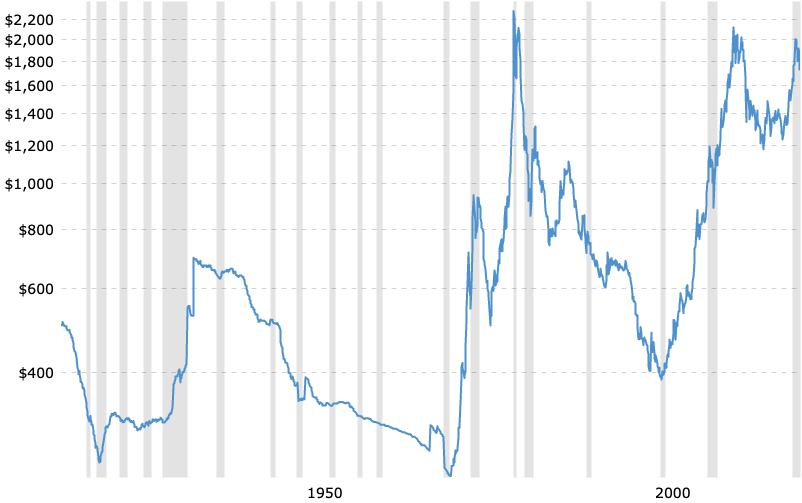 In fact, Bitcoin’s volatility actually highlights the credibility of its fixed and predetermined monetary policy. For example, Bitcoin cannot be quantitatively eased ⏤ you can’t print or issue more bitcoins to dampen price volatility in the markets.

Having said that, Bitcoin’s volatility is diminishing over time: 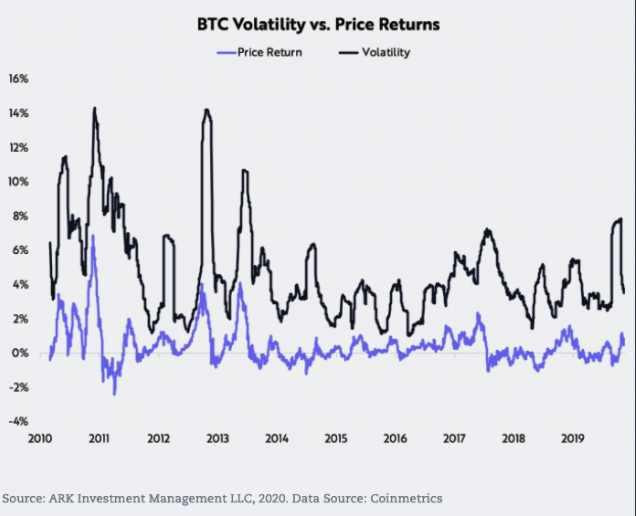 As adoption has increased, volatility has declined. Bitcoin’s 260 day volatility is at a low of 1.8x vs the Nasdaq[…] As Bitcoin market capitalization approaches gold’s market cap, it will likely exhibit similar volatility” ⏤ Skybridge Capital

“… towards the end of 2020, Bitcoin’s annual volatility almost reached the same level as the world’s most significant stock index (S&P 500) at a 1.4x multiple” ⏤ Bitcoin in Institutional Portfolios

Okay, but what if it goes to zero? What if governments ban Bitcoin?

Myth #3 – The Government Will Shut Bitcoin Down

From Antifragile: Things That Gain from Disorder:

Antifragility is beyond resilience or robustness. The resilient resists shocks and stays the same; the antifragile gets better. This property is behind everything that has changed with time: evolution, culture, ideas, revolutions, political systems, technological innovation, cultural and economic success, corporate survival, […] the rise of cities, cultures, legal systems, equatorial forests, bacterial resistance … even our own existence as a species on this planet.

And we can almost always detect antifragility (and fragility) using a simple test of asymmetry : anything that has more upside than downside from random events (or certain shocks) is antifragile; the reverse is fragile.

A classic example of something that is antifragile is  Hydra, the Greek mythological multi-headed serpent. For every head chopped off, the Hydra would regrow two heads.

Bitcoin has proven over time to be antifragile.

The fact is, it is almost impossible to completely ban something that lives on the Internet.

On 5 Dec 2013, the People’s Bank of China (PBOC) made its first step in regulating Bitcoin by prohibiting financial institutions from handling Bitcoin transactions. It then went on to effectively ban cryptocurrency exchanges and trading platforms in Sept 2017, during a period when Chinese markets had accounted for 90% of global Bitcoin trading (Wikipedia, Reuters).

However, where there is demand, business finds a way. 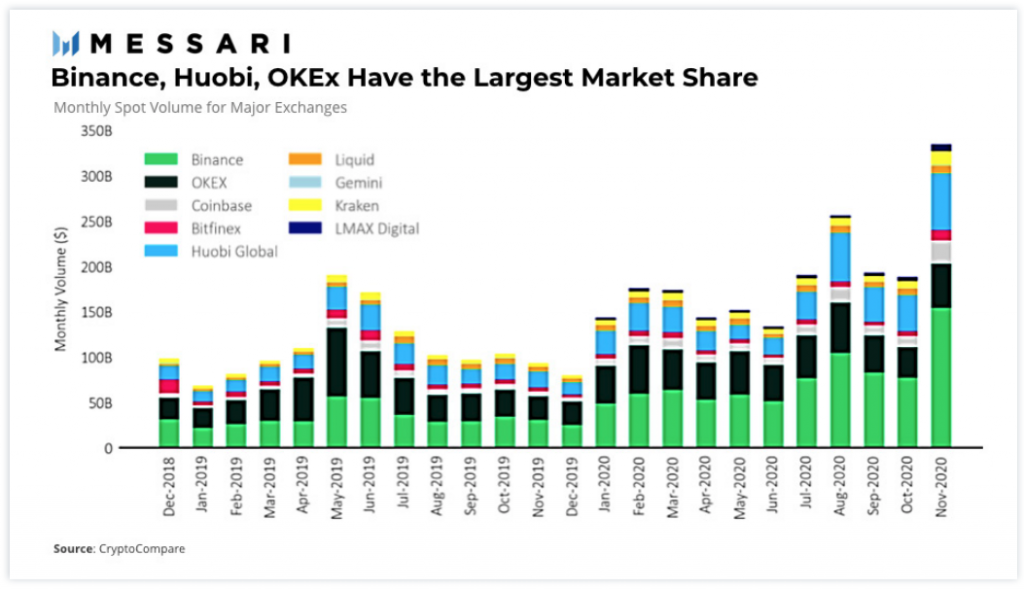 In Mar 2021, large Chinese companies in China are starting to adopt cryptocurrencies.

Chinese app developer Meitu followed the footsteps of Tesla by investing $40M into Bitcoin and Ether, as the first tranche of the firm’s investment plan to buy up to $100 million worth of cryptocurrencies.

“You cannot stop people from trading bitcoin, because Chinese law recognises the value of virtual assets. Anything with value should be allowed to change hands,” Huang Mengqi, lawyer at Beijing DHH Law Firm.

Here’s the thing: Bitcoin is hard to ban.

For every head chopped off, the Hydra would regrow two heads.

For every restriction placed on Bitcoin, more ways to access Bitcoin emerge ⏤ one way or another.

Despite Ray Dalio’s recent concerns on the potential risk of the US government banning Bitcoin, the overall regulatory developments in the US have never looked more promising for cryptocurrencies.

Here is a non-exhaustive summary of recent key developments in the US:

TLDR; regulations on cryptocurrencies in the US are rapidly developing and maturing.

Senator Lummis is the first US senator to openly own bitcoin, publicly stating her beliefs that Bitcoin will be “an important player in stores of value for a long time to come”, and that “our own currency inflates, Bitcoin does not”

In Feb 2021, the City of Miami proposes to i) pay employees in Bitcoin, ii) collect taxes in Bitcoin, and iii) invest the City’s treasury into Bitcoin.

“The tide is turning in bitcoin’s favor to such a degree that governments, faced with currency devaluation resulting from excessive money printing, will likely begin adding it to their reserves as a hedge at some point” ⏤ Raoul Pal

Yes, Bitcoin could be a bubble. Its volatility could skyrocket again. Governments could completely outlaw it.

But what about its upside? What if it is not a bubble, and that Bitcoin is in fact a revolutionary and rapidly maturing financial asset?

What if you look back to today five years from now, and wonder why didn’t you buy any bitcoins?

“Bitcoin may still go to zero. But it can also become the core of a new monetary architecture. If so, one bitcoin may be worth millions of dollars. The asymmetry is interesting to a portfolio. People who know the most about bitcoin believe its future success is nearly inevitable. Whereas the other camp thinks that its failure is equally certain. Status quo is not possible” ⏤ Kjell Inge Røkke

Bitcoin was born in a financial crisis. It will come of age in this one ⏤ Dan Morehead

Many know, but few understand.

Prior to joining the crypto space, Ken Chia, author of Bridging Bitcoin, has spent most of his career in finance and was most recently at J.P. Morgan. Follow him on Twitter here.

What Are The Advantages & Disadvantage Of Trading Using CFDs
Loo Cheng Chuan, Founder Of The 1M65 Movement, Shares How Much The Financial Markets Have Changed Because Of COVID-19 #TheNewNormal