Snowball Vs Avalanche: Which Is The Best Method For Paying Off Your Debts?

When you have multiple loans, each with different loan tenures and interest rates, how should you prioritise your repayments? 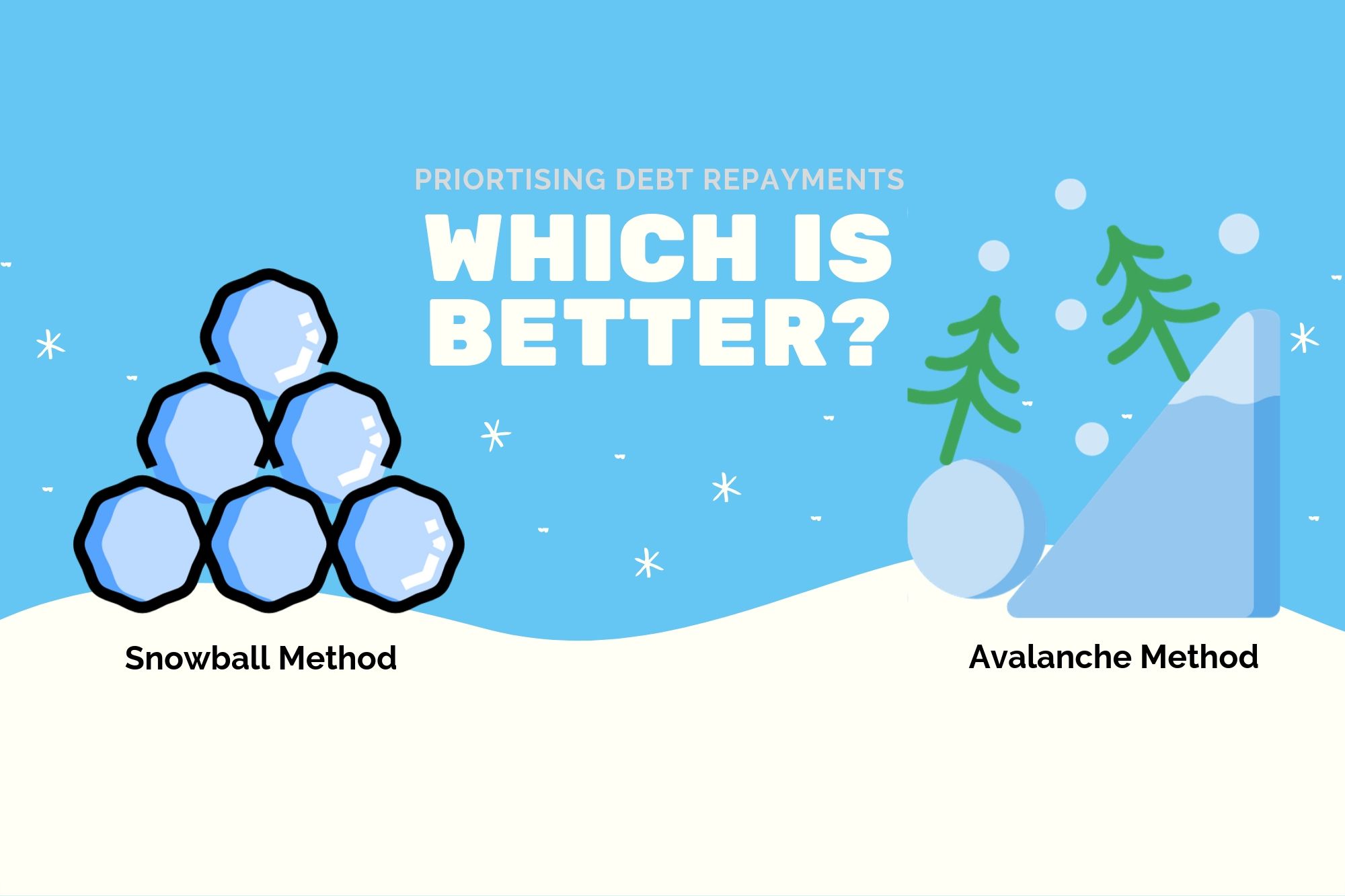 As of 2019 Q2, Singaporeans are over $324 billion in debt, of which almost 25% (over $80 billion) is from unsecured personal loans such as credit card debt, motor vehicle loans, education loans, and personal loans.

When used smartly and responsibly, debt can be a very useful tool for our personal finances. However, sometimes we might find ourselves unable to cope with the sheer number of debts and are unsure which is the best order we should clear them.

Today, we will explore the pros and cons of two popular methods for prioritising payment of multiple debts: Snowball and Avalanche.

Read Also: Having Trouble With Debts in Singapore? Here Is Your Roadmap To Clearing Your Debts

What Is The Snowball Method?

Popularised by Dave Ramsey, the Snowball Method suggests clearing the smallest of your debts first before moving on the next smallest, and so on.

Here’s how you can apply the Snowball Method to clearing your debts.

The main appeal of this method is that it keeps yourself motivated with small, quick wins. Getting your smaller debts out of the way can be extremely gratifying, and reduces the number of items on your plate so that you can eventually dedicate more focus (and funds) on clearing your larger debts.

However, since you’re disregarding interest rate, you might end up paying more in interest overall as compared to the Avalanche Method.

Read Also: How Quickly Credit Card Debt Can Snowball And Leave You In Financial Ruin

What Is The Avalanche Method?

Also known as “debt stacking”, the Avalanche Method advocates prioritising the highest-interest debt first before working your way down to the debt with the lowest interest.

Mathematically speaking, this method saves you more time and money – it’s supposed to help you pay off your debt in a shorter period with less overall interest as compared to the Snowball method.

But the Avalanche method does require more patience, conscientiousness, and discipline as you won’t be able to enjoy the short-term motivation of quick wins.

Read Also: What Happens To A Person’s Debt When They Pass Away In Singapore

Illustration Of Snowball VS Avalanche Method (With Numbers)

Imagine that you dedicate a total of $2,000 every month to paying off your debts. Since your minimum repayment alone accounts for $1,000, this leaves you with an extra $1,000 monthly.

After paying off your monthly minimums, you would tackle the rest of your debts in the following order:

You’ll be able to make quick work of Credit Card B, leaving you with only three outstanding debts instead of four within a mere two months!

With the Snowball Method, you can expect to take 23 months to pay off all your debt, paying $2,069 in interest.

After paying off your monthly minimums, you would tackle the rest of your debts in the following order:

With the Avalanche Method, you can expect to take 22 months to pay off all your debt, paying $1,910 in interest, but you will only be able to reach your first milestone at the end of four months instead of two.

This is just an illustration of how the Snowball and Avalanche methods can lead to different outcomes. The conclusions may vary depending on the actual interest rates and loan amounts.

Which Method Leads To More Success, According To Academic Studies?

While mathematical rationale says that the Avalanche method should win hands down, reality has proven to be exceedingly irrational.

Assistant professors David Gal and Blakeley B. McShane of Kellogg School of Management conducted a study in 2012 that showed people were more likely to stick with their debt payoff plan if they focused on smaller debts first. In their analysis, they found that those who pursued a strategy of “small victories” were more likely to eliminate their entire debt balance than those who did not.

A 2016 study by associate professors at the Questrom School of Business, Boston University also yielded similar findings: paying down the account with the smallest balance tended to have the most powerful effect on people’s sense of progress – and therefore their motivation to continue paying down the rest of their debts.

While the Avalanche Method may seem the obvious logical choice, most people have found success with the Snowball Method instead, despite theoretically having to pay more in interest.

Choosing Between Snowball And Avalanche Method

Whether or not the Snowball or Avalanche Method of debt repayment is better depends on your own personality.

If you’re the kind of person who needs small victories to keep you inspired, and you look forward to the satisfaction of striking debts off your list as quickly as possible, then the Snowball method may be better for you.

If you’re a rationalist who lives your life by the numbers, then the Avalanche method is a no-brainer – as long as you can stay disciplined enough to play the long game.

Hybrid Snowball-Avalanche Method – The Best Of Both Worlds?

That being said, choosing between one method or the other is something of a false dichotomy – there are situations when using principles from both methods could end up being the best solution for you.

For example, in the illustration above, you could choose to clear your debt in the following order:

This presents a hybrid strategy that uses the Avalanche method in the beginning (clearing off your highest-interest debts first) and the Snowball method at the end (clearing off the smaller debt amount first).

Regardless of which method you eventually choose, understanding the pros and cons of each will help you tailor a strategy that best fits your needs – and brings you closer to achieving freedom from the chains of your debts.

Read Also: The Sandwich Generation: How To Juggle Between Caring For Your Parents And Looking After Your Children

A Better Way To Pay Your AXS Bills? Here’s Why The Quiet Addition Of GrabPay Is Great News For AXS Users
HSBC Revolution VS HSBC Advance VS HSBC Visa Platinum: Which Card Should You Get For The Free ENTERTAINER?