Oatly: The Rising Trend Of Plant-Based Consumables And What Should Investors Know About It

Demand for oat milk is not just driven by the lactose intolerant. 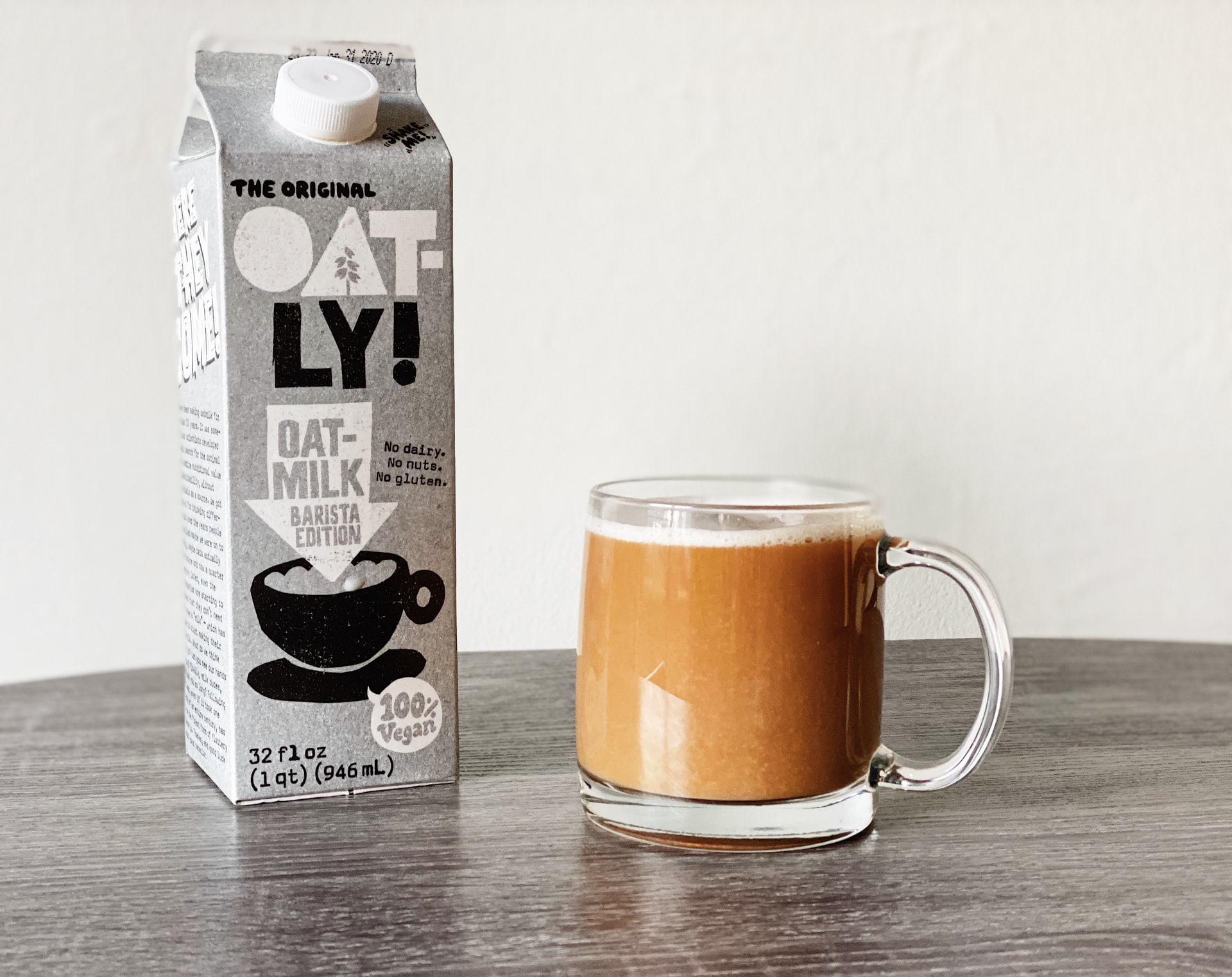 Mention oat milk, almond milk or rice milk a decade ago and most Singaporeans would probably brush it off as another food fad. After all, we already have soy milk for decades. Fast forward to today, supermarkets are now lined up with rows of plant-based products that serve as alternatives to dairy, meat and even fish. Among the growing trends and demand for plant-based alternatives, brands such as Impossible Foods, Beyond Meat, and Oatly has gained traction over the years.

A pioneer in the global oat milk industry, Oatly has become a brand synonymous with oat milk. The first among the plant-based companies, the company recently did an Initial Public Offering (IPO) on NASDAQ on 20 May 2021.

Here, we take a deeper look at the plant-based consumable trend and the company – Oatly.

What Are Plant-Based Consumables And Why Are Consumers Demanding It?

Plant-based consumables are products made from plants such as soya beans, hemp, rice, and oats. The products range from drinks, beverages to protein alternatives for meat, eggs, dairy, and seafood.

According to a 2019 Deloitte UK report, the trend of plant-based consumables was taking off as consumers become increasing “flexitarian”. Flexitarians are consumers who still consume meat and animal-based product but aims to reduce their level of consumption. The shift in consumer consciousness is mainly driven by environmental, ethical and health concerns against animal-based products.

Additionally, the resemblance in taste to animal-based products helped convert conventional consumers too. Unlike traditional vegetarian protein alternatives, Beyond Meat and Impossible Foods were able to mimic “meaty” taste (including the juices) to a considerable degree. Likewise, Oatly’s successful entrance to the American market was due to Oatly’s barista blend being able to mimic the same creamy texture of dairy in coffee and tea.

The COVID-19 pandemic has also transformed consumer behaviours due to the additional isolation time spent retrospectively. Consumers are increasingly aware of their purchasing choices as they are starting to consciously choose brands aligned with their personal values.

If Plant-Based Consumables Are So Environmentally Friendly, How Green Are They? 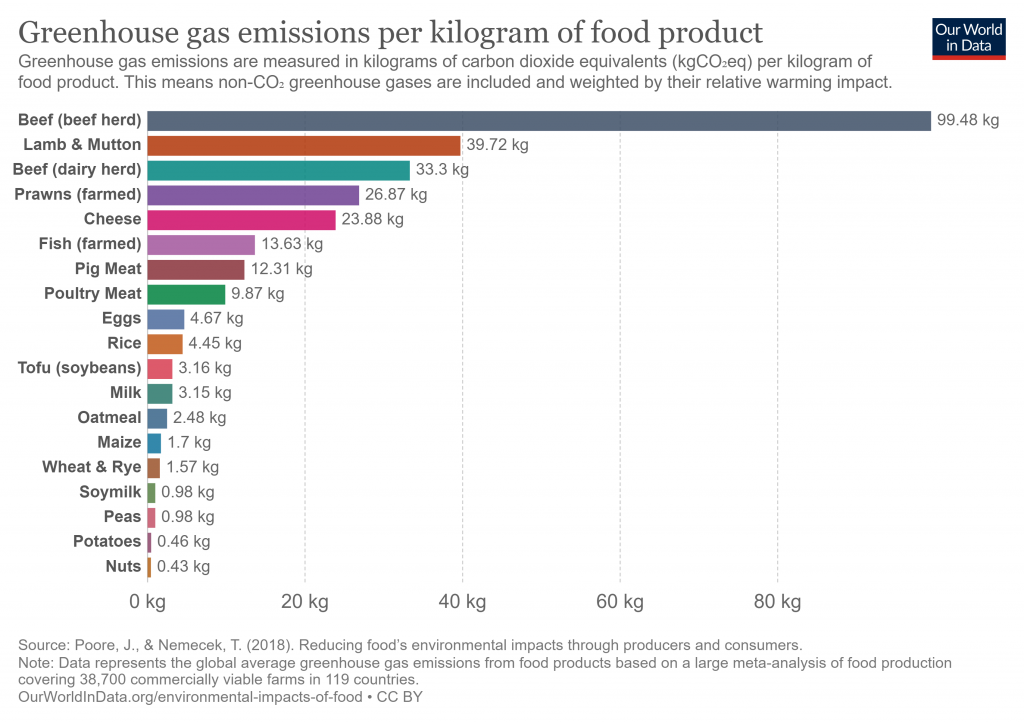 Source: Our World In Data

Another study by Our World in Data also shows the same compelling case on the negative environmental impacts of meat sources. Meat sources, especially beef, produce more greenhouse gas emission in comparison to plant-based sources like oatmeal and wheat (as shown above).

With consumers being more environmentally conscious, plant sources are seen as a viable alternative to reduce our personal carbon footprint.

Read More: 7 Ways Singaporean Can Go Green And Save Money (And Be Part Of Singapore Green Plan 2030)

In the company’s recent IPO, Oatly opened 31% above its listing price of $17. Investors interest did not wane after its listing as Oatly’s price continued to rise. It closed at a new high of $28.73 (as of 11 June 2021) with a market capitalisation of US$17 billion.

Currently, Oatly is almost twice the size of Meiji Holdings, one of the largest Asian dairy producers, which has a market capitalisation of US$9.5 billion. The interests are mostly driven by the following three factors.

Not only serving lactose intolerant and vegan consumers, Oatly is pitching itself as an alternative to animal-based products.  As stated in Oatly’s IPO prospectus, its vision for the company was “…help people shift from traditional dairy to plant-based products and enact positive societal and industry change.”

Oatly is targeting the global US$718.9 billion diary market while continuing to maintain its dominance in the non-dairy market. Their product range includes oat related products from milk, yoghurt, cream and even ice cream.

#2 Oatly Is Positioning Itself For The Asia Market

On 29 March 2021, Oatly and Yeo Hiap Seng entered into a S$30 million joint venture to produce oat milk in Singapore. The factory set up aims to prepare Oatly for the rise in oat milk demand in Asia.

Having entered China market for two years now (since 2018), Oatly was able to capitalise on the same American strategy of converting coffee and tea drinkers to oat milk before releasing the products on the shelf. Since its entrance, Oatly’s China revenue grew by 450% over two years as of 31 December 2020.

As of 31st March 20201, Oatly has four operating factories with three more factories underway to meet the growing demand for oat milk. The three new factories include Yeo’s joint venture and a factory based in Maanshan City, China.

Supermarkets had a good year during the pandemic. With restrictions on dining and movement, it may be expected that Oatly’s demand would have fallen due to the lack of café sales.  Instead, Oatly sales did better than before through their food retail channels such as coffee shop shelves space and groceries stores. According to Nielsen, sales of oat milk were up 347.3% the first week of March, and shelf sales for Oatly at Starbucks were sold out quickly.

Oatly has also invested considerably to increase production capabilities. However, it is not completely immune to the pandemic. Such facilities may face issues in operation due to the potential of the virus outbreak, affecting supply and sales, and consequently revenue and profits.

The dairy market remains a steep and challenging market to enter. Currently, alternative dairy products are relatively more expensive compared to dairy products. Converting dairy customers can be an upward challenge if pricing is the core consumer focus.

Apart from dairy, there are also non-dairy competitors such as other nuts and beans milk alternatives. Alpro, another popular plant-based milk company, belongs to one of the largest and profitable dairy companies, Danone. With the backing of its dairy parent, Alpro can position itself to compete and outgrow Oatly. In fact, Alpro has recently entered the China market using the same strategy as Oatly.

Recognition of plant-based consumables has gained traction over recent years. In 2019, it gained the endorsement of Food and Agriculture Organisation of the United Nations (FAO) as a sustainable food source.

However, the plant-based consumables share of the animal-based market remains low. Based on Good Food Institute (GFI), plant-based milk only accounts for 15% of total retail milk sales. In the same study, GFI found that the repeat rate for plant-based consumables is at 78%, which means that not all consumers would continue to support the products after trying. With 90% of sales dependent on oat milk, Oatly could be adversely impacted if consumer preference changes over time.