Why Is Everything Becoming So Expensive? Uncovering The Current Chaos In The World’s Commodity Market

Why is the world running out of French fries? 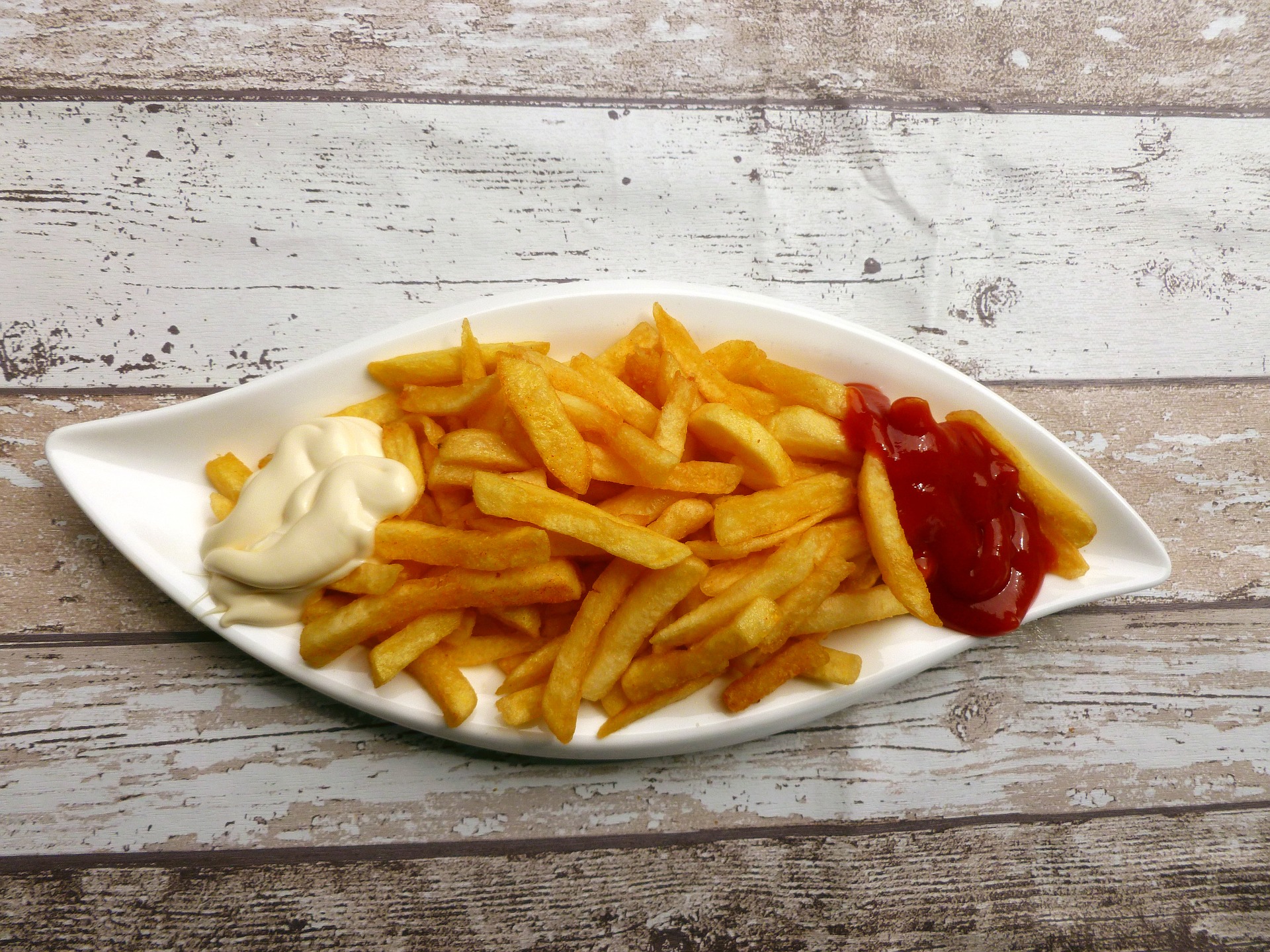 Could you imagine the world running out of French fries?

Last month, that possibility turned into reality as KFC Singapore removed the popular fast-food side and replaced it with waffle hash. McDonald’s stores in Malaysia and Japan also halted sales of large-size fries as the world grapples with an ongoing potato shortage. That’s not the only problem Singapore and the rest of the world faces. The widespread devastation brought about by the Russian-Ukraine conflict raises the spectre of chaos in the commodity markets: from food, to metals, to energy.

The commodity markets are panicking for 2 main reasons.

First, inventory was already tight before the invasion began, owing to Covid-19 supply chain disruptions. Secondly, the invasion of Ukraine has resulted in vanishing supplies from the 2 countries – further exacerbating the wrecked supply chain. Although Russia and Ukraine’s economies are correspondingly ranked 11th and 57th in the world, they produce some of the world’s most important exports. Russia is number 1, 2, 3, respectively, in international exports of natural gas, oil and coal. It also supplies 10% of the world’s aluminium and copper, as well as 20% of the world’s nickel. Meanwhile, Ukraine, is the second-largest grain shipper: shipping corn, wheat, sunflowers, and other produce. 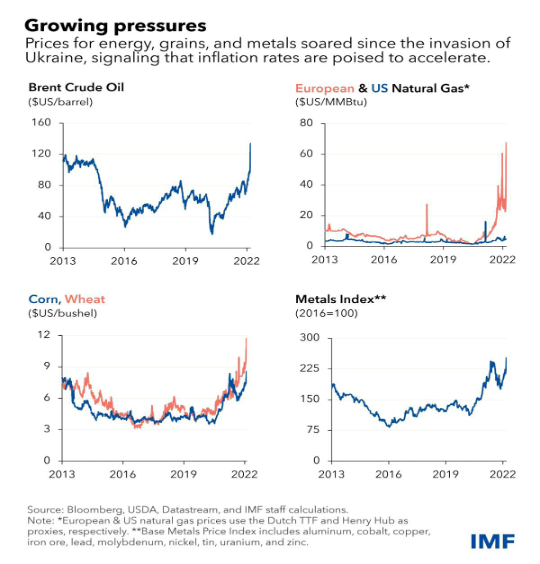 The Calamity In The Nickel Market

On March 9, nickel, which is used in stainless steel and electric vehicle batteries, surged to $100,000 a ton from $25,000 just the week before. This spike in nickel prices forced the London Metals Exchange (LME) to halt the trading of the metal – the second time it has done this in its 145-year history. Prices spiralled upwards after fresh sanctions forced banks to cut exposure to Russian nickel suppliers, who make up 20% of global class 1 nickel. The first casualty of this nickel panic is Tsinghsan Holdings Group, a Chinese company facing a potential $8 billion trading loss as it could not close its nickel positions in time. More casualties could follow, especially in downstream industries, such as electric vehicle companies that use nickel in their batteries. 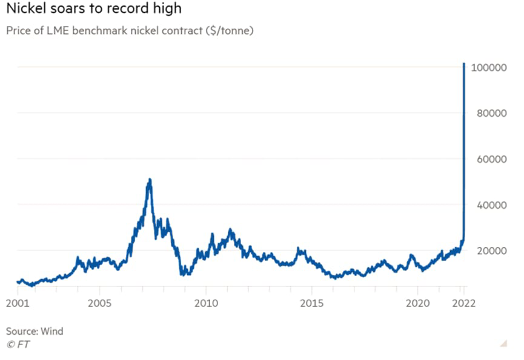 The relentless shelling of Ukrainian cities obscures another shadow crisis: the global semiconductor industry running low on neon gas. A week ago, Ingas and Cryoin, two Ukrainian companies responsible for 54% of the world’s total neon productions, shuttered operations as further attacks on Ukraine continued. Neon gas is an essential chemical substance used to power lasers that etch patterns into semiconductor chips. The semiconductor industry is nervous that a repeat of 2014 could happen, when Russia annexed Crimea and caused to price for neon gas to spike by 600%. Although big chipmakers have reserve stocks of neon gas prepared, it could only last them for a while. Angela Zino, an analyst at investment research firm CFRA, predicts that these neon stockpiles could be depleted by end April.

The dearth of neon gas is highly likely to exacerbate the ongoing chip shortage that began since early 2021. Before the war, Apple had already slashed its iPhone production targets by as many as 10 million units while popular BMW models are lacking touchscreens due to the semiconductor crunch. As a result of the war, more things could be in short supply, from defibrillators to alarm systems to virtual reality headsets. Though companies elsewhere in the world could displace some of that neon gas shortfall in Ukraine, it would take at least 9 months to ramp up current neon production, hence prolonging the global chip shortage.

Last Monday, the United Nations warned that the world is facing an imminent food crisis, as Russia’s invasion threatens the supplies of key staple crops. Given the blockade of the Black Sea, it would be difficult to ship Ukrainian supplies out, while sanctions make Russian goods virtually ”untouchable”. In addition, the ongoing war would mean that few crops would be harvested this spring in Ukraine’s blood-soaked fields. The impact is devastating: 12% of the world’s calories traded are cut off. To break it down, the 2 nations account for 30% of global wheat exports, 20% of corn exports, and 80% of sunflower oil. Unsurprisingly, wheat and sunflower oil prices have both jumped 50% since the war. 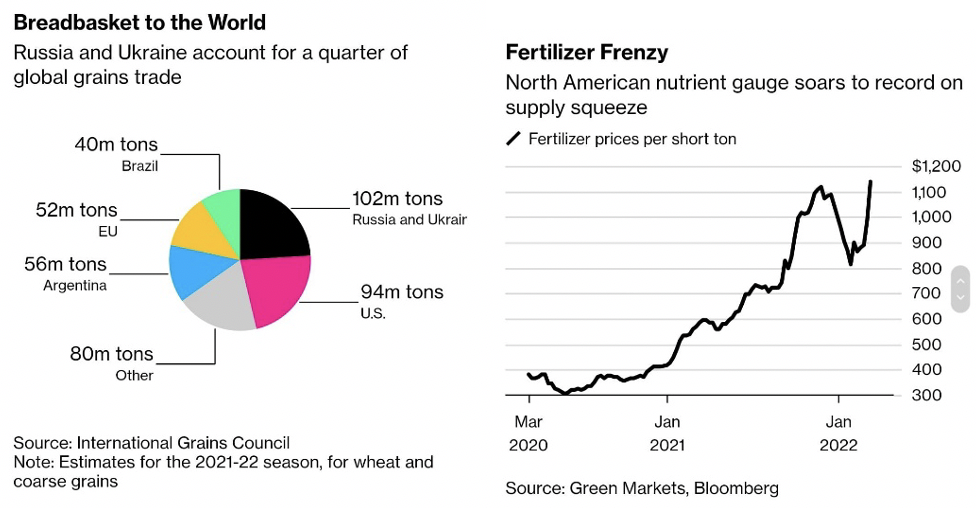 On top of that, fertiliser prices are soaring so high that many farmers can no longer afford soil nutrients. Russia and Belarus are major producers of potash, phosphate and nitrogen-containing fertilisers, comprising 13% of the market. Earlier this month, Russia’s trade and industry ministry halted the export of such fertilisers – sending fertiliser prices soaring by 300%, further raising the uncertainty of future harvests.

Given the food insecurity, countries have rushed to secure supplies for themselves, but some have turned towards protectionism to solve their short-term needs. In the recent week, Argentina, Hungary, Turkey and Indonesia have all introduced food-export restrictions, worsening the food shortage. This could hurt Singapore, where 90% of the food consumed here are imported. In our local supermarket, you might have noticed egg prices climbing. In fact, they have risen by 30% in the past month alone. In other parts of the world, panic buying has already kicked in: supermarkets in Italy have been cleared of pasta, pharmacies in Norway are out of stock on iodine tablets, and governments in Europe have imposed buying limits. This is reminiscent of what Singapore had gone through when COVID-19 first hit in 2020.

Besides food inflation eating into households’ budgets, the price shock will affect the local F&B scene as well. According to Straits Times, 17 out of 38 hawkers are considering increasing their food prices due to mounting food costs. To add on to their woes, rising electricity bills will force some eateries to shorten their operating hours or even closing to do solely delivery. The popular 24-hour dim sum restaurant, 126 Wen Dao Shi, switched to opening from 10.30am to 3am due to a ”threefold increase in electricity prices”.

How Would This Affect Singapore & The World?

Facing the largest war on European soil in almost 80 years, global funding availability – associated with future growth – have reached their tightest levels since 2009, as measured by Goldman Sachs global financial conditions index (FCI). Such economic tightening can cascade into a stagflation scenario: where the economy experiences stagnating economic growth amidst high inflation and high unemployment. In the US, the risks of a recession may be as high as 35%, and recent data showed that its inflation reached a 40-year high of 7.9%. 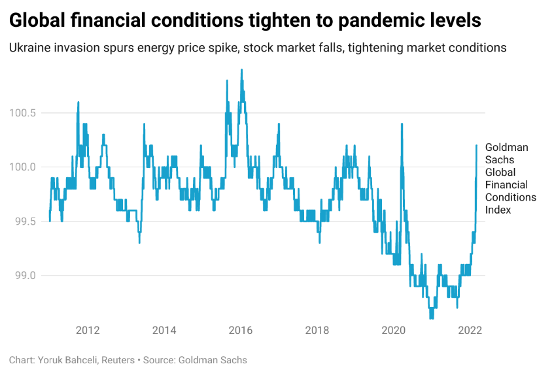 For Singapore, though we lack direct economic ties with Russia and Ukraine, we will still feel the spillover effects from the semiconductor shortage, as well as the high metal and food prices. Furthermore, a global recession could hurt our export-dependent economy. Currently, our GDP growth for 2022 is forecasted at 3-5%; but it could turn negative if the Ukraine-Russian conflict lasts longer than 6 months, according to CIMB economist Song Seng Wun.

Amidst This Challenging Climate, How Should Investors Respond?

There are three investment approaches for investors to leverage this volatile period and achieve their investment objectives. Firstly, the safe-haven investing approach, which looks towards investing in assets that will hold/increase in value during times of market uncertainty. Such investments may include holding government bonds, real estate and gold. Investors can also invest in the consumer staples sector, where companies tend to have stable profit levels amidst a contracting economy.

The next approach is to search for enterprising companies that are set to benefit from geopolitical tensions or resource shortages. These include defence stocks and upstream production companies. Specifically, we want to identify companies that are price setters or market leaders in their industry. This year, global defense spending is expected to surge in response to the conflict, while upstream companies that produce high-demand input materials will be favoured over downstream companies facing supply chain disruptions and high input costs. For example, large semiconductor foundries (i.e. TSMC/Samsung) with more neon gas reserves than smaller competitors will be to continue production for longer, and may even raise prices. In contrast, automotive players (i.e. Toyota/BMW) will experience the semiconductor shortage restricting their vehicle production, and subsequently their sales.

The third approach is to invest in the volatile commodities market. 2021 had been a great year for commodities, with the Bloomberg Commodity Spot Index up 27%; 2022 might be even better: when we are facing a global ‘everything’ shortage. With supply chain issues unlikely to be resolved soon, the commodity supercycle is likely to stay. Recognising bullish momentum in overlooked commodities could allow investors to reap outsized rewards.

The Vices Of Gambling (And Are You Unknowingly Gambling?)
The Cost Of Mental Health – And Why You Should Treat It Before It’s Too Late