Are we paying too much for university education in Singapore? 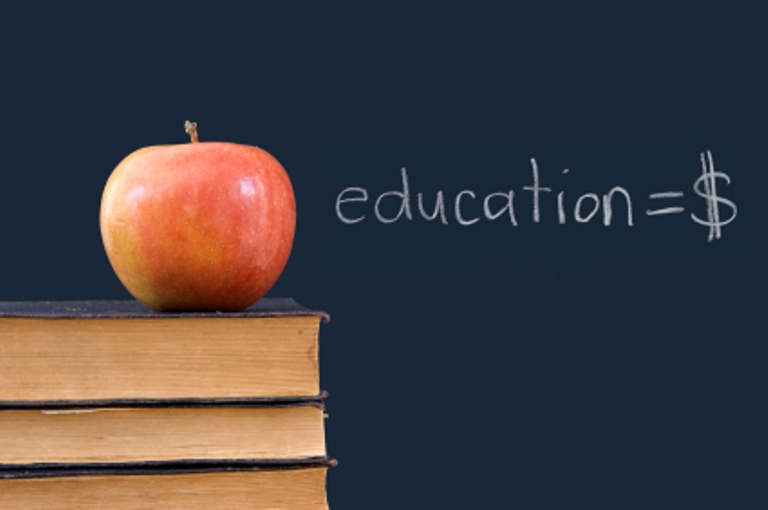 This article first appeared on ValueChampion

Inflation in cost of education has been a big point of discussion in Singapore. For instance, a survey by the Department of Statistics showed that Singaporean families spent S$1.1bn on tuition in 2015, compared to S$650mn a decade ago.

While this seems like a big jump, such report doesn’t provide the necessary comparisons to put these changes in perspective. For instance, prices have increased for many things like food, transportation, housing and labor, not just education; inflation is a natural part of our economy. Therefore, it’s unclear whether education cost has increased just as much as general prices and income level; if this were true, education could be just as expensive as it has been in the past. Other explanations are also possible, such that while education itself has not become more expensive, families have begun to pay for more afterschool classes, contributing to the increase in education spending.

In 2007, there were three major universities in Singapore: National University of Singapore, Nanyang Technological University and Singapore Management University. Back then, each school charged roughly S$6,000-S$7,000 of annual tuition for a general arts & science degree for Singaporean citizens with government subsidies (higher fees were charged for permanent residents and international students).

These three schools have increased their tuition dramatically since then, roughly by 38% on average. The biggest increase was at Singapore Management University, which now charges S$11,300 of annual tuition to citizens with government subsidies, a 51% increase. The other two schools have increased their tuition by 32% from S$6,110 in 2007 to S$8,050 in 2016.

Since 2013, two other institutions have been established Singapore. In collaboration with MIT, Singapore University of Technology and Design (SUTD) set up its campus in Singapore in 2012. A year later, Yale and NUS founded Yale-NUS program that began in 2013.

Consumer Price Index (CPI) is a measure of average prices of a basket of consumer goods and services, such as transportation, food and medical care. Simply put, it portrays how much prices have increased in the economy for an average consumer.

According to Ministry of Trade and Industry, CPI has increased by roughly 24% since 2007 and has been more or less remained stable since 2013. This is in stark contrast to average university tuition in Singapore, which has increased by roughly 38% since 2007 and 10% since 2013. That university tuition growth has significantly outpaced CPI growth indicates that not only has education gotten more expensive over time, it has also gotten costlier than most of Singaporean consumers’ other needs like food and transportation. 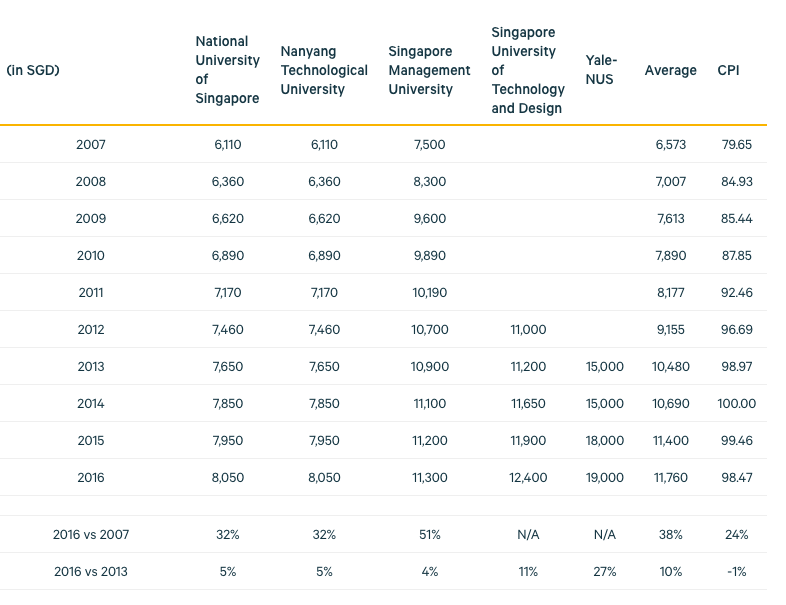 Increase in tuition could be explained by a number of factors, including supply and demand. If number of applicants (demand) have outgrown available seats in these institutions (supply), the schools could be facing lower admissions rates and be justified in raising their costs. However, the data released by the Singaporean government shows that admission rate for “publicly-funded degree courses” have increased from 25.1% in 2007 to 30% in 2014. Admission rate for other post-secondary education institutions all exhibited meaningful increase over the same time period.

Not only that, # of enrolled students at NUS, NTU and SMU have more-or-less grown in line with population growth. In fact, the number of enrolled students at these institutions grew 19% between 2007 and 2015, slightly below Singapore’s population growth rate of 21% in the same period. This happened all the while proportion of foreign students declined, suggesting that demand did not exhibit any extraordinary growth.

Another possibility is change in government subsidies, which play a huge role in increasing education affordability in Singapore. Hypothetically, tuition could be increasing because government subsidies are not able to keep up with education demand. However, data suggests the exact opposite of this. From 2007 to 2014, government expenditure on education increased by 47% to S$11,719bn and its recurrent expenditure on University & Poly-technics increased even faster by 77%. The government’s spending increased even faster than tuition, suggesting that the government is trying to do its part to keep education cost inflation in control & keep good education available for everyone. Then what could be the real cause of rise in university tuition?

We found one possible answer in labor cost. Singapore’s median household income has grown in real terms by roughly 10% between 2007 and 2015. Given that CPI grew by about 25% in the same time period, the combination of 35% could explain the 37% increase in university tuition between 2007 and 2015. However, even this may not present a full explanation. Wages cannot be the only major cost at these instutitions. For example, a university has to pay for its buildings, utilities and research equipment in addition to staff and faculty salaries. Unless costs for all of these increased at the same rate, the rise in college tuition must be influenced by other factors, such as pure price increases.

This article was contributed to us by ValueChampion

Revolut is transforming how millions of people manage their money. From in-app budgeting and analytics to FX, Revolut gives you more.

Sign up and order your free card today. Visit Revolut for more information.

4 Common Financial Mistakes You Can Learn From Wongamania, Without Losing (Real) Money
Path Dependency: What The Oil Industry And The QWERTY Keyboard Have In Common