How Big Of A “Windfall” Is A Prime Region HDB Flat?

The lottery effect is real for some HDB flats 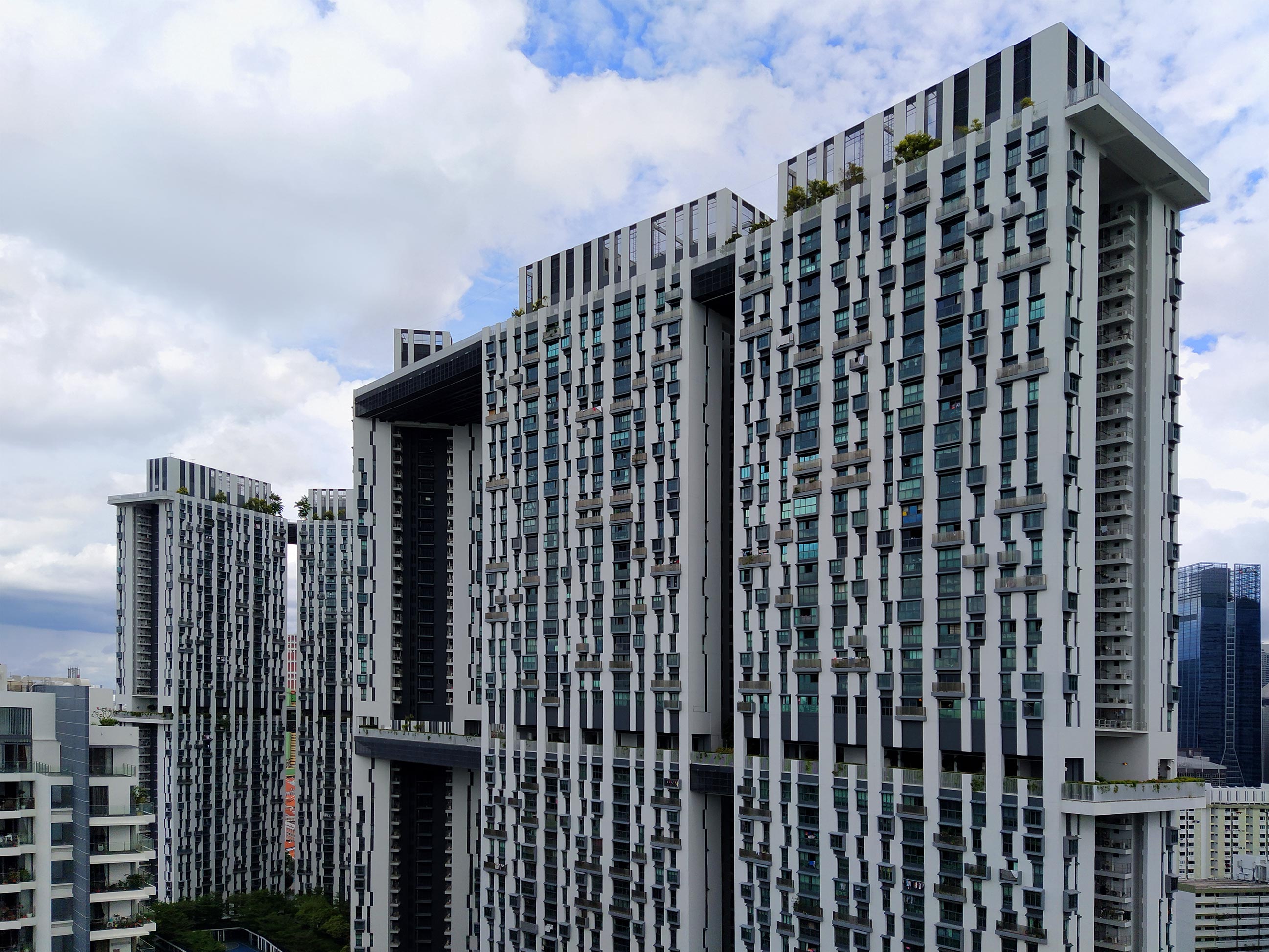 This article was contributed to us by Ryan J Ong, from Stacked Homes.

Resale flat sellers have had some grim looks over the past few days. With potential new resale restrictions brewing, it’s been a big talking point over whether we’re seeing the end of high priced prime region HDB resale flats. We also asked in our previous article, how we could cope with the “lottery effect” of landing flats in prime areas.

What deserves to be looked at closely, however, is just how much of a “windfall” such a flat may be. Is simply securing a flat in a desirable area, such as Bishan or the Central Area, going to lead to life-changing profits?

Given the recent limelight on how Singaporeans who manage to score prime region HDB flats are akin to winning the lottery, we decided to take a look at some of the notable prime BTOs and how they fare against non-prime region HDB BTOs.

While there have been a slew of BTOs launched in prime areas such as Clementi, Bishan and Toa Payoh, we needed to reference resale transactions.

As such, only BTOs launched before 2012 were considered as it took 4-5 years to construct plus another 5 years to hit their MOP.

The 4 prime HDBs considered are:

For this comparison, we’re aware that different developments could’ve launched at different times and so their profitability gets skewed e.g. a BTO launched at 2007 pricing and was sold in 2016 would’ve see huge profits given the stellar rise in property prices between 2007-13.

To mitigate this, we’ve compared the prime with non-prime developments that were launched shortly before, during or after the prime BTO launch.

In addition, we considered only resale transactions within 24 months of the very 1st transaction for the HDB. In other words – how much money do owners make on average if they sell within the 1st 2 years of their MOP?

Pinnacle@Duxton VS other non-prime BTOs

Within the 1st 2 years from the 1st resale transaction, it managed to gain $152,792 more than Fernvale Grove for a 4-room flat.

SkyVille@Dawson VS other non-prime BTOs

Within the 1st 2 years from the 1st resale transaction, it gained on average, $187,736 more than the average of the other non-prime HDBs for a 4-room flat.

SkyTerrace@Dawson VS other non-prime BTOs

Within the 1st 2 years from the 1st resale transaction, it gained on average, $213,678 more than the average of other non-prime HDBs for a 4-room flat.

Within the 1st 2 years from the 1st resale transaction, it gained on average, $218,775 more than the average of other non-prime HDBs for a 4-room flat.

But how much profits do BTOs gain by estate?

To find out, we apply the same methodology of getting the difference between the average resale transactions within the 1st 2 years of the 1st transaction, and the initial average BTO cost: 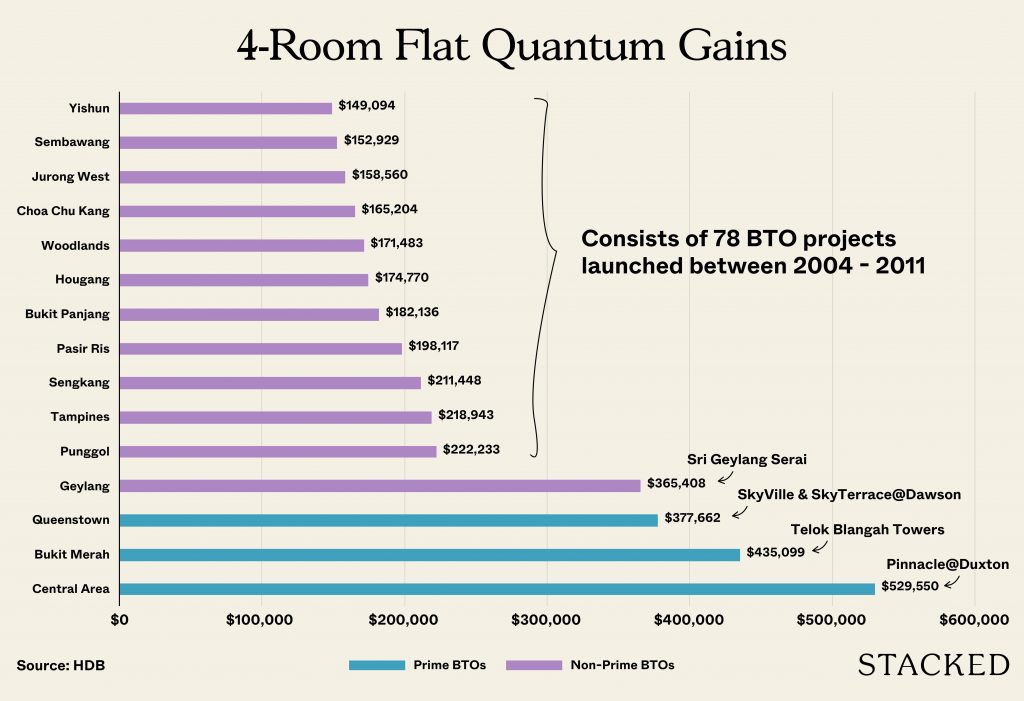 In this case, we’re only looking at 4-room flats as they’re the most common type of flats sold by the HDB. The figures above show the total profits by estate.

In terms of quantum gains, it’s clear that prime HDBs outdo non-prime HDBs. You would have also noticed that 1 BTO project “Sri Geylang Serai” has also achieved a great deal of profits upon reaching its MOP. As such, some may consider this to be a prime HDB, and therein lies the subjectivity of what a prime or non-prime HDB really is. Do you think Geylang HDBs are considered prime? Drop us a message to share your thoughts!

But for those who are wondering about their return on investment, here’s what it looks like. 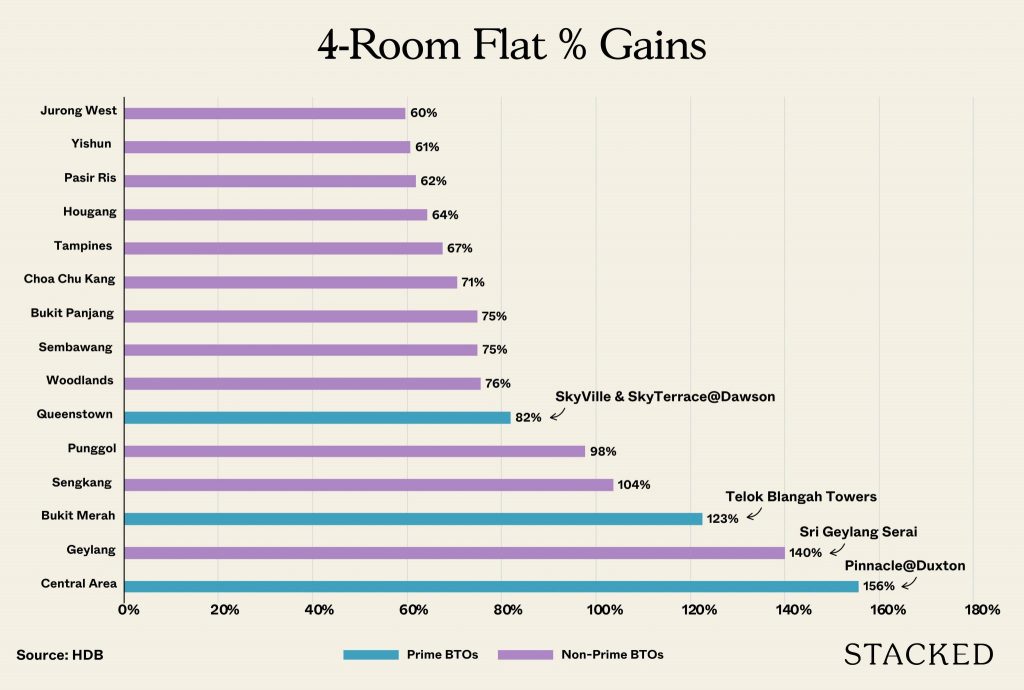 The % gains here are taken from the quantum profits divided by the initial costs.

You would notice that the chart looks relatively similar, with the exception of both Queenstown falling below Punggol, as well as Geylang rising to 2nd place.

Beyond the 1st MOP, how do resale flats in prime regions fare?

To find out, we’ve compared the price movement of HDB prices across different prime estates – which includes both central area flats, as well as the most in-demand HDB areas.

Assuming you got a flat in these areas back in 2010, here’s how much you might get for them today:

A long time ago Bishan had a negative reputation, having been built on a large burial plot. Today that’s mostly been forgotten – Bishan today is known for being a mature, largely “self-contained” town with a wide range of schools, malls, parks, etc. We have a more detailed look at Bishan in a previous article.

Bukit Merah is the most heavily populated planning area in central Singapore, and it includes areas like Tiong Bahru and Everton Park. Of late, the star of this area has been Tiong Bahru – once considered an ageing estate, it’s now been heavily gentrified with artisanal cafes and high-end boutiques. Flats in this area are scarce, and are sometimes sold within mere days of listing.

Bukit Timah is as famous for public housing as it is for private property (it’s one of the best-known landed enclaves in Singapore). Bukit Timah has the same appeal for both: the city fringe location means it’s just a 10-minute drive from Orchard; and yet it manages to be one of the greenest spots in Singapore despite being quite central.

Clementi has benefitted from the development of its neighbours. It’s close to the One-North tech and media hub, as well as being relatively close to Holland Village. Even prior to this, however, Clementi was well known for its proximity to NUS and Singapore Polytechnic. In around 2017, Clementi became the furthest HDB estate from the CBD to see million-dollar flats.

Queenstown is one of the oldest and most developed towns in Singapore. Even before our starting point of 2010, it was known for high flat prices. Time has been a blessing and a curse to flats here (though currently more of the former than the latter): many resale flats in Queenstown are approaching real concerns of lease decay. However, the build-up of amenities like schools, malls, markets, etc., make it one of the most desirable places to live. For those who are interested in learning more about the estate, you can read our neighbourhood guide here.

Toa Payoh (Bidadari) was one of the most oversubscribed BTO launches in HDB history, with the 5-room units being 75 times oversubscribed. This is a good reflection of the sheer demand in Toa Payoh. This town is the first ever HDB satellite town, and is the template on which many subsequent HDB towns are based. This area is very old, and very developed. In fact, Singapore’s very first MRT station was opened in Toa Payoh, on 5th August 1985.

Much of what we said about Queenstown above can also be fairly applied to Toa Payoh.

Lastly, we have the central area. This is the estate where the poster boy of “windfall profits” Pinnacle@Duxton resides. In case you’re wondering where all the other HDBs in the central area are located, they’re actually nearby around the areas of Chinatown, Outram, Bugis and Rochor. Many of them are already quite old, so you can imagine the fanfare when Pinnacle@Duxton was launched.

An interesting fact: Pinnacle@Duxton is actually located right on the edge of the Central Area estate boundary outside Bukit Merah! 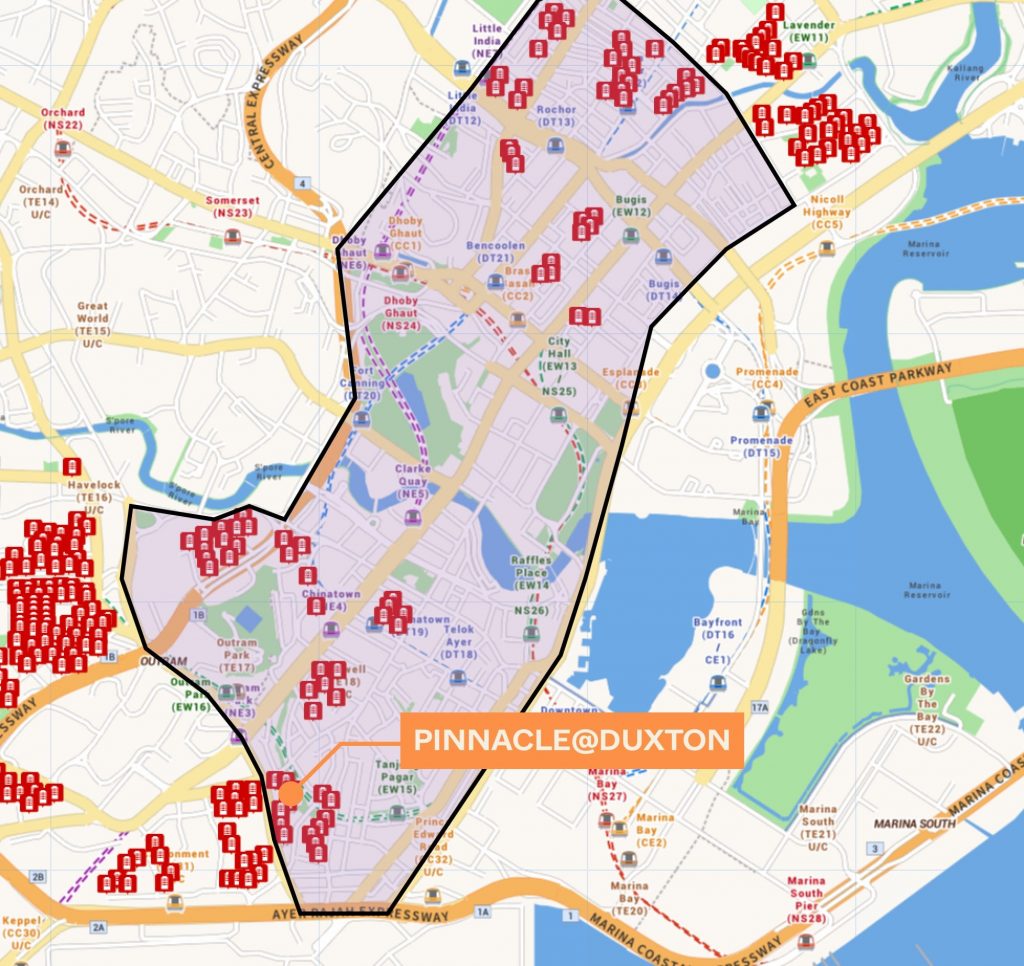 So what does this all mean?

As you can see, the disparity is most obvious when notable HDB properties are stacked against their non-prime counterparts. However, this not something they share in common with every flat in the area.

Even within the central area, Pinnacle @ Duxton stands out the other resale flats.

The “windfall” effect is real, but not universal even within a mature or more central town

In desirable estates, 3-room flats don’t seem to do particularly well. With the sole exception of Bukit Merah, 3-room units in all the above towns have shown depreciation. It’s mainly the larger units – such as executive flats in Bishan and Bukit Timah – that have seen the lion’s share of gains.

Also, as you can see above, it’s mainly select HDB developments – not just any flats in prime areas – that could really bring about a windfall.

So while million-dollar flats do indeed come from these areas, we shouldn’t assume all the flat owners in these towns need to have the screws tightened on their resale profits.

Likewise, if you’re looking for a resale flat today, don’t assume the above neighbourhoods – with their already high prices – are a sure-fire route to owning a condo. Drop us a message about the specific flat you’re considering, so we can advise you on its likely prospects. Do also follow us on Stacked for the latest updates on the Singapore real estate market, and the most in-depth property reviews.

What Should You Check When Buying A Tenanted Property In Singapore?
5 Things To Know About HDB Community Care Apartments