Behind The Budget Statement: Here’s How Singapore’s National Budget Is Planned Each Year 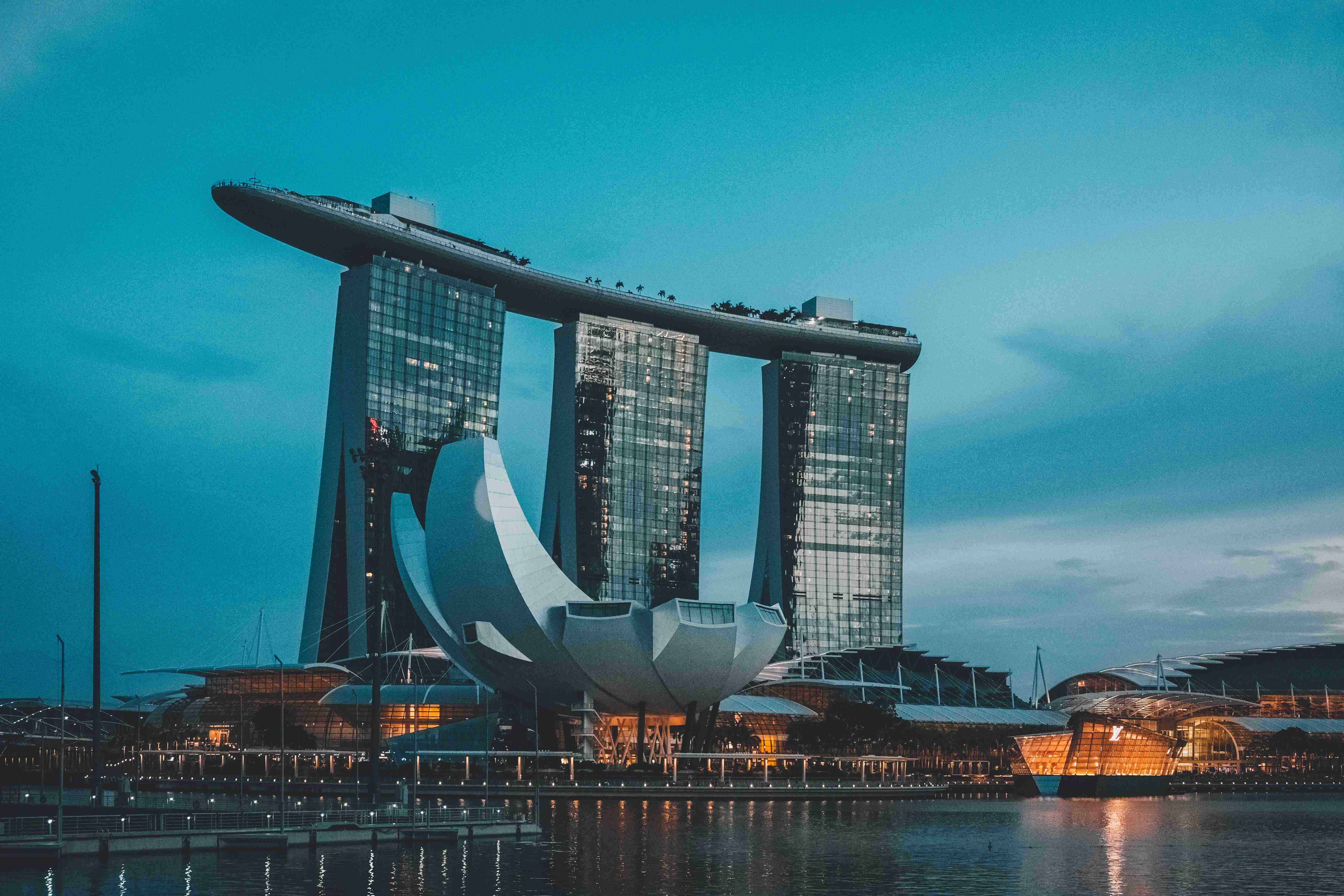 This article was produced in collaboration with the Ministry of Finance. All views expressed in this article are the independent opinion of DollarsAndSense.sg

Every February, Singaporeans look forward to the annual Budget Statement by the Finance Minister.

It’s a significant Parliamentary occasion, with many major announcements made. But it would be wrong to think of the Singapore Budget as simply a one-day affair.

In fact, the delivery of the Budget Statement marks the culmination of months of planning that involves not just government agencies, but also external partners and stakeholders.

What Is The National Budget For?

A Budget is drawn up every financial year, which begins on 1 April of each calendar year. So why do we have an annual national Budget?

Similar to households, Singapore has varied national needs. Healthcare, education, security, and infrastructure development are just some examples of competing priorities to be planned for.

A country, like a household, cannot afford to spend beyond its finite means – at least, not without facing serious repercussions from unsustainable long-term spending. A Budget helps us to plan for the future, tracking both national revenue and expenditure patterns.

Devoting an excessive proportion of the Budget to meet immediate challenges may be popular for some, but not necessarily a responsible move, especially without a focus on investments for the future. A key principle is to remain fiscally sustainable over the long run.

#1 Focusing On Our National Priorities First

When it comes to household budgeting, we need to consider what our priorities are.

For example, a family with young children may prioritise their children’s education over entertainment and annual holidays. Families managing healthcare concerns may want to save for medical expenses.

As a country, what are our priorities? For a start, Singapore is facing the challenges of an ageing population. In 2015, 1 in 8 Singaporeans were above the age of 65. In 2030, it’s estimated that about 1 in 4 Singaporeans will be 65 and older. This means that we have to be prepared for significant increases in healthcare expenses.

Throughout the year, individual ministries would have identified various needs that require addressing. However, the government collectively will have to consider the competing priorities and make deliberate choices and trade-offs.

#2 Engaging Singaporeans to Better Serve Them

The Budget isn’t planned solely by the government. It is important to hear the views and suggestions of Singaporeans.

Prior to each Budget, the Ministry of Finance (MOF) gathers ideas from different stakeholders, which include businesses, unions, professional groups, and the wider public. There are various avenues for Singaporeans to share their views, including online channels, dialogue sessions, and Listening Points set up by REACH Singapore across the island.

For Budget 2020, the public can visit the REACH Budget 2020 microsite, or the REACH Listening Points. MOF also partners the People’s Association (PA) and its grassroots organisations in their Ask Kopi Kakis Initiative, which will see kiosks in the heartlands for Singaporeans to provide feedback. 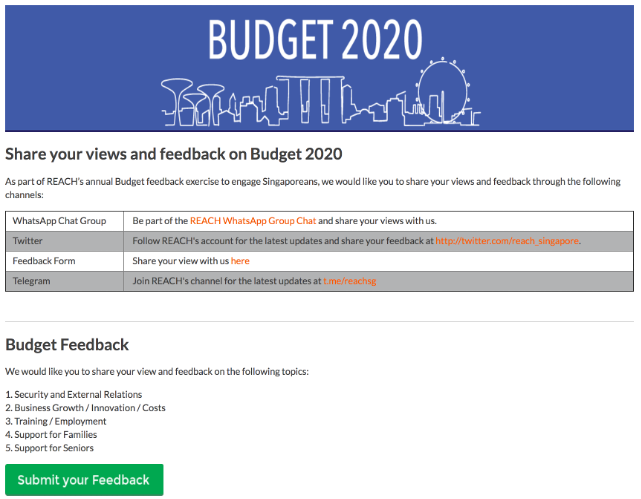 After reviewing the feedback of various stakeholders, it’s time to finalise the Budget, and this task falls on the shoulders of MOF.

Think of MOF as the CFO for Singapore. The Budget Statement, delivered by the Finance Minister each February, explains to Singaporeans the rationale for government spending in the upcoming year and outlines where the funds will come from.

Most of us will know that the government’s revenue comes from taxes, fees and charges, as well as contributions from our reserves. But perhaps only a handful may know that the Net Investment Returns Contribution is, in fact, the largest single source of revenue for the Budget.

We are able to benefit today because previous generations saved and grew the reserves for us. Hence, it is only fair that we spend every dollar wisely, and continue to manage the reserves prudently for future generations.

In summary, given that we have finite resources, it is imperative that we plan well in advance to ensure that we have enough resources to support those who need it today, with some resources set aside for a rainy day, and a portion invested for the future.

This is also why no single year’s Budget should be viewed in isolation. As the government takes a long-term approach in charting the country’s future, every year’s Budget builds on past years’ Budgets. Over each term, the government seeks to address the needs of different groups of Singaporeans, while continuing to provide various public goods and services.

Read Also: A Surplus, Deficit, Or Balanced Budget? Is There An Ideal Type Of Budget?

The Budget Statement that is delivered isn’t the approved Budget yet. Parliament will reconvene for the Budget Debate, which sees Members of Parliament (MPs) raising questions and debating the government’s plans.

The debate typically spans three days. The Finance Minister will conclude with a Round-up Speech, aimed at clarifying or elaborating on any queries raised by the MPs.

#5 Committee of Supply (COS) Will Scrutinise Each Ministry’s Plan

Parliament then sits as the Committee of Supply (COS) to scrutinise the budget of each ministry (also known as the estimates). MPs can question the spending requirements of the ministries and their projected expenditures. After the COS has voted on all ministries’ estimates, it will report its decision to Parliament, which will then debate and vote on the Supply Bill.

#6 President’s Approval For The Supply Bill

Once the President’s approval is given, the Supply Bill then becomes enacted into a law called the Supply Act. The Supply Act authorises the sum of money the government can spend in the coming financial year.

Did you know that Singapore is required under the Constitution to keep a balanced Budget over each term of government? This is a safeguard that prevents any government from overspending during its current term, thereby committing the young and future generations to repay its debt.

Budgeting for a country shares some key fundamental principles as budgeting for a household. It is important to always plan ahead and ensure that the expenditure does not exceed our revenue in the long run. Only by upholding fiscal prudence and fiscal sustainability, will we be able to continue to run our country or household smoothly.

Read Also: Singapore Budget 2019: What I Learned About Economics And Personal Finance After Watching It

For more updates on Budget 2020, do check out www.singaporebudget.gov.sg.

6 Policy Changes Implemented In Singapore By January 2020 That Will Affect You Financially
The Singaporean Journey: Through The Lens Of The Singapore Budget