Are Licensed Money Lenders Allowed To Advertise In Singapore?

Creativity is great, but not at the expense of society 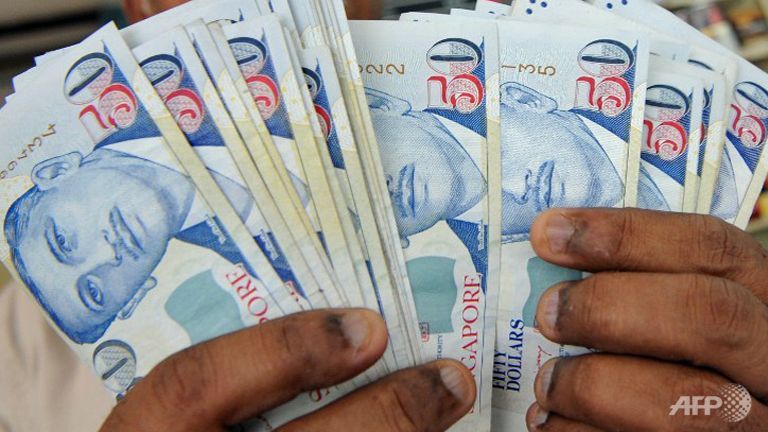 Lately, a very interesting advertisement has been making rounds on Facebook. We’re sure some of our regular readers from DollarsAndSense.sg may also have seen this advertisement on Facebook, since Facebook’s algorithm would have identified your interest in a particular topic such as personal Finance.

In case you haven’t come across it, this is what it looks like on Facebook. We have erased the company’s name because our intent is not to attack a specific company or provide any promotion to it. 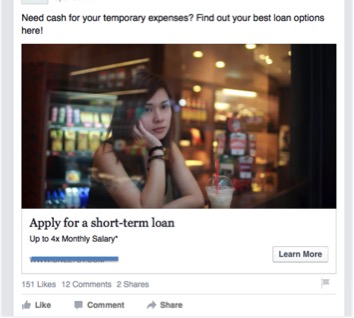 When we first came across this advertisement, what jumped out was how out-of-place it appears to be on Facebook.

For those who are not aware, there are strict advertising regulations for businesses in certain sectors that the authorities do not want Singaporeans to be actively exposed to. The Moneylending industry is one such sector.

The Ministry Of Law has a set of rules that governs what a licensed Moneylender may or may not do in relation to marketing and advertising. Obviously, these rules were set in place for good reasons – to ensure that society is protected. We have extracted some of the key directions worth understanding.

Not Permitted For Ad

1. Advertising channels such as “paid-for Internet links (also known as ‘sponsored links’) through search engines such as any paid-links from search engine, appearing on Internet search engine results page or any other Internet webpage are not permitted.

2. Directories in online medium which consist solely of listings and advertisement of moneylenders and which are advertised in any manner are not permitted.

Here is the link to the complete regulation from the Ministry of Law.

Is the advertisement contravening the regulations set in place?

At first glance, it appears to be infringing at least one, if not more, of the governing regulations set by the Ministry of Law. The company at question is clearly promoting a “sponsored link”. While most people may not consider Facebook a “search engine”, it is clearly still an “Internet webpage”.

However, upon clicking and finding out more about the company, we realised there is a lot more to this than meets the eye.

Here is the thing. The company that is promoting this advertisement is actually a tech start-up based in Singapore that isn’t actually involved in any moneylending activities itself. Rather, what it does is to offer financial comparisons between moneylenders. After completing a loan request, the user will receive various loans offers for comparison. In it’s own words, it “gives you the power to make better loan decisions”.

It is hard to dismiss the entrepreneurial merits behind the founders’ intentions. You can even add that they are solving a very “real problem” in society, where people who require access to quick cash from licensed moneylenders are able to compare the best available rates out there on the platform that this website has.

However, the more important question that needs to be answered is whether what this company is doing is circumventing the intentions of the regulation set in place by the Ministry of Law. The company is able to do so, mainly because it is promoting its moneylending platform, which connects people to other moneylenders, rather than being the moneylender itself.

The regulation was originally set in place so that licensed moneylenders will not be able to peddle their products to the common man. In fact, they are not even allowed to send SMS texts to their customers to inform them about their products, though this does not appear to have stopped some from doing so.

All start-ups have an ambition to do well, and there is nothing wrong with that. The hard question that we sometimes ask of entrepreneurs is what their version of success looks like. Making money is always a good yardstick, and there is no doubt all businesses should aim to be profitable. The bigger question, though, is at what cost to society.
Our views on the moneylending industry are clear. You can read this article we posted previously.

Read Also: Why Borrowing From Money Lenders Will Always Be a Horrible Idea

The start-up appears to be making some progress in Singapore, having already been featured as one of the top up-and-coming FinTech platforms from a well-known Asian tech website. Once again, we won’t include any links to this article. If you really want to read more about the company, we are sure you can find it yourself.

To end, the point we think is most poignant is what should or should not be allowed. The law exists, and even though there is a genuine technopreneurial virtue behind this project, it does not mean the law can be broken.

Need Money Fast? Here Are 3 Much Better Alternatives Compared To Money Lenders
HDB Or Bank Loan? Which Should You Be Taking When You Buy Your Home?