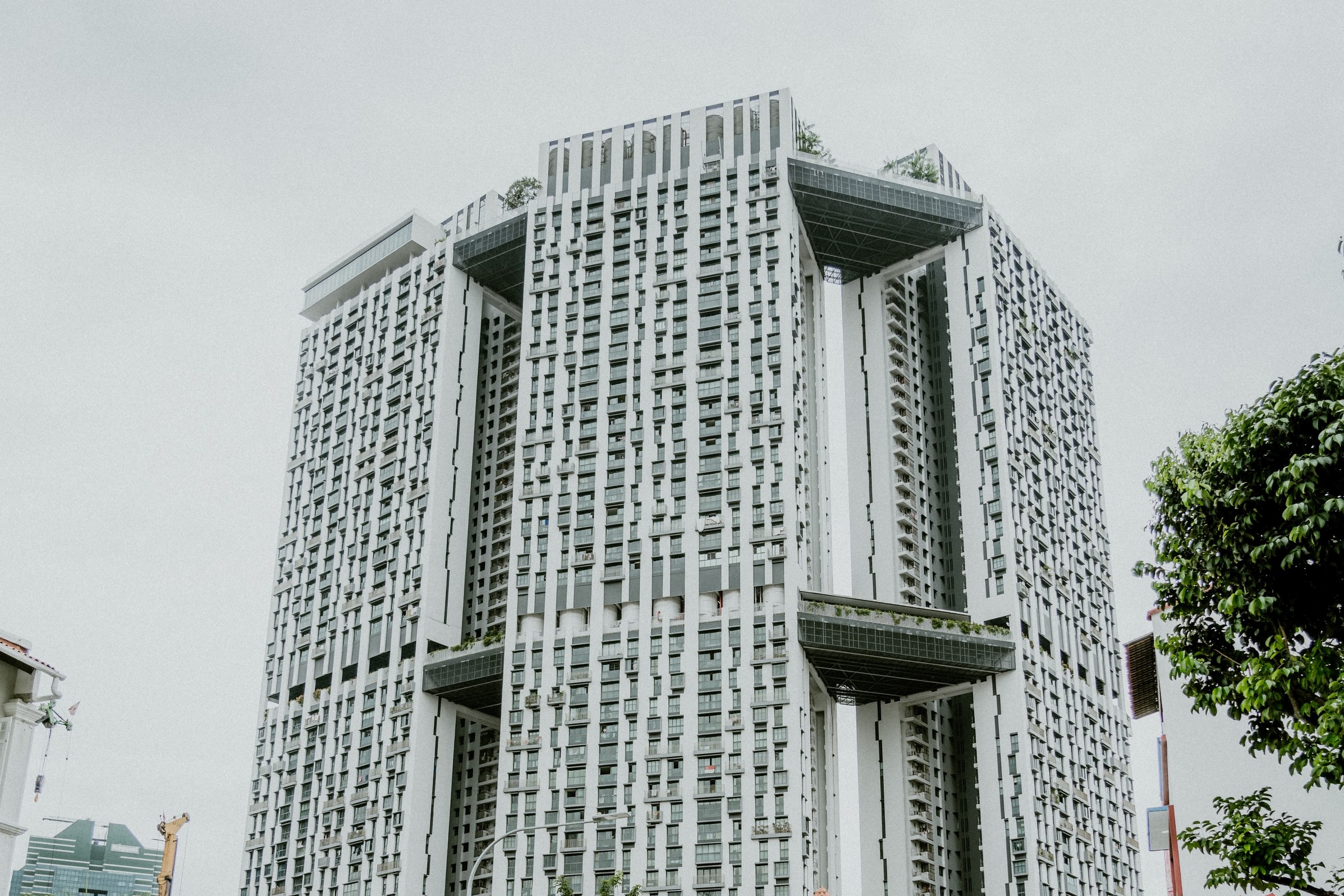 With HDB resale prices rising and a record number of 13 HDB resale flats selling for above $1 million in October 2020 even as Singapore grapples with the COVID-19 pandemic, one would think that HDB resale prices are recession-proof. With such record-breaking prices, it seems that even public housing is no longer the affordable option that HDB flats were originally meant to be.

In the meantime, let us explore which are the housing estate that have HDB resale flats of more than $1 million.

An HDB estate that needs no introduction, [email protected] unsurprisingly has the highest number of resale flats above $1 million.

Centrally located in Tanjong Pagar, this estate dominates the $1 million HDB flat arena. Completed in 2011, the flats are relatively new and have plenty of remaining lease. [email protected] stands out from its run-of-the-mill HDB siblings with award-winning design and condominium-like features such as sky gardens. It is no wonder that Singaporeans have been willing to pay eye-watering million-dollar prices for even a 4-room flat.

Read Also: Neighbourhood Estate Guide: Why Tanjong Pagar Will Be Even More Desirable In The Future 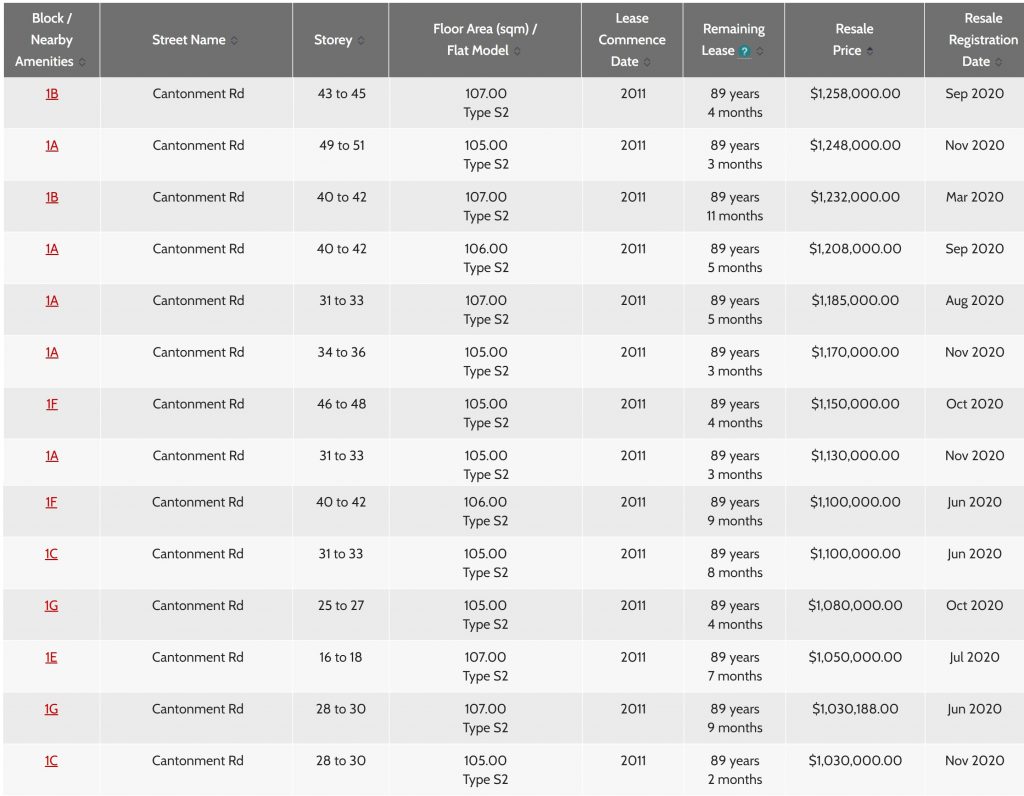 Next on the list is Queenstown which includes the Holland Village, Commonwealth and Dawson areas. This estate has a more varied assortment of HDB flats ranging from old Executive Apartments to newer flats that are just out of the Minimum Occupancy Period (MOP).

Queenstown is also home to the rare HDB terrace house units at Stirling Road which are almost 50 years old. The most recent terrace unit (131 sqm or 1410 sqft) transaction was in October 2020 for $928,000, slightly below the $1 million mark.

Mei Ling St is a hotspot for those who are looking for large resale units with Executive Apartments of 150 sqm or 1615 sqft. While they are older with less than 75 years left on the lease, they are in a prime location, conveniently located next to Mei Ling Market and Food Centre and Queenstown MRT. 5 such Executive Apartments were sold in 2020 for above $1 million.

The other hotspots include much newer units (some freshly out of MOP) at Holland Drive (Buona Vista Court), Commonwealth Drive (Commonwealth 10) and Dawson ([email protected] and [email protected]). Some of the units in these areas were also offered under SERS.

Just slightly outside central area, we have the Bukit Merah estate or more specifically the Tiong Bahru area. 10 out of the 12 resale transactions are all concentrated at Boon Tiong Road (Tiong Bahru View). Bulk of these units were sold to HDB residents under Selective En-bloc Redevelopment Scheme (SERS). With the windfall from both SERS and then sale of above $1 million after MOP, it is no wonder that MND is concerned about the profiteering from such HDB transactions in prime locations.

Although these are standard flats at Tiong Bahru View, the location is a premium one being next to Tiong Bahru Plaza and Tiong Bahru MRT and near the Central Business District (CBD). In recent years, Tiong Bahru has also been attracting the hip and happening with many independent and quaint cafes opening in the area.

Aside from the Tiong Bahru View units, one almost 50 year old jumbo unit (131 sqm or 1410 sqft) at Moh Guan Terrace and a 4-room unit at [email protected] also breached the $1 million mark.

The other 6 resale transactions above $1 million are also from another flat type that is no longer being built: Design, Build And Sell Scheme (DBSS). These DBSS units are all from the Natura Loft project which was completed in 2011. With plenty of remaining lease, a prime location and estate design features, these units cost a pretty penny today.

Read Also: 5 Types of HDB Flats That Are No Longer Being Built In Singapore

Like Bishan, the profile of HDB units in Toa Payoh that breach the $1 million mark are mainly from The [email protected] Payoh: DBSS units which are less than 10 years old.

While not as known for expensive HDB flats, Toa Payoh is an established mature estate that is relatively centrally located and close to the CBD. Being an older estate, it has its fair share of older and larger HDB units such as the 144 sqm or 1550 sqft Executive Apartment that sold for above $1 million.

While the older executive maisonettes in Clementi have yet to breach the $1 million mark, the newer 5-room HDB flats have crossed that line.

Two units are from Clementi Towers, an integrated development including Clementi Mall, Clementi MRT and the bus interchange. With such integrated facilities, it is little wonder that these units can command such a high price.

The other two units are from Trivelis, a DBSS project. In line with other DBSS projects in Bishan and Toa Payoh, such units in established mature estates tend to command a price premium.

Similar to Clementi, the newer 5-room DBSS units command a higher price than their older more spacious Executive flats. Two DBSS units from City View, the DBSS project in Boon Keng, sold for above $1 million in 2020.

Finally, a relatively new entrant to the $1 million HDB flat club, Ang Mo Kio makes the list with a massive jumbo flat and a newer 5-room flat that is not a DBSS unit.

The 5-room flat is located at Teck Ghee Vista, which is a SERS development, also stands out from the slew of DBSS 5-room flats or centrally located standard 5-room flats which have crossed the $1 million mark.

Read Also: What Are HDB Jumbo Flats And How You Can Own One?

Read Also: 5 Things You Need To Know Before Buying An Older HDB Flat With A Lease Of Less Than 50 Years

As seen from these 8 estates, there are a few characteristics of HDB flats that cross the $1 million mark. They are all from established mature estates and relatively centrally located. If they are older and have a shorter remaining lease, they are typically HDB flats that are larger than normal, such as executive apartments, executive maisonettes or jumbo flats. If they are 5-room or smaller flats, they are typically newer, with a lease of 10 years or lesser, and they tend to be units located in DBSS developments or BTO projects that have been built with condominium-like features in central locations.

Before you buy (or sell) such HDB flats, do think carefully. According to HDB, less than 0.3% of resale transactions go above $1 million. Thus, the odds of your HDB flat fetching a future princely sum is unlikely, unless you already live in a flat similar to those featured in the above list. With MND scrutinising these transactions, it is also possible that some form of cooling measures may be introduced in the future to put a damper to future resale transactions aspiring to cross the $1 million mark.

How Much You Need In Your CPF Retirement Account (RA) At 65 To Afford The Average Retiree’s Expenses With CPF LIFE Payouts?
What Should You Check When Buying A Tenanted Property In Singapore?