If you want to own companies that operate dormitories. 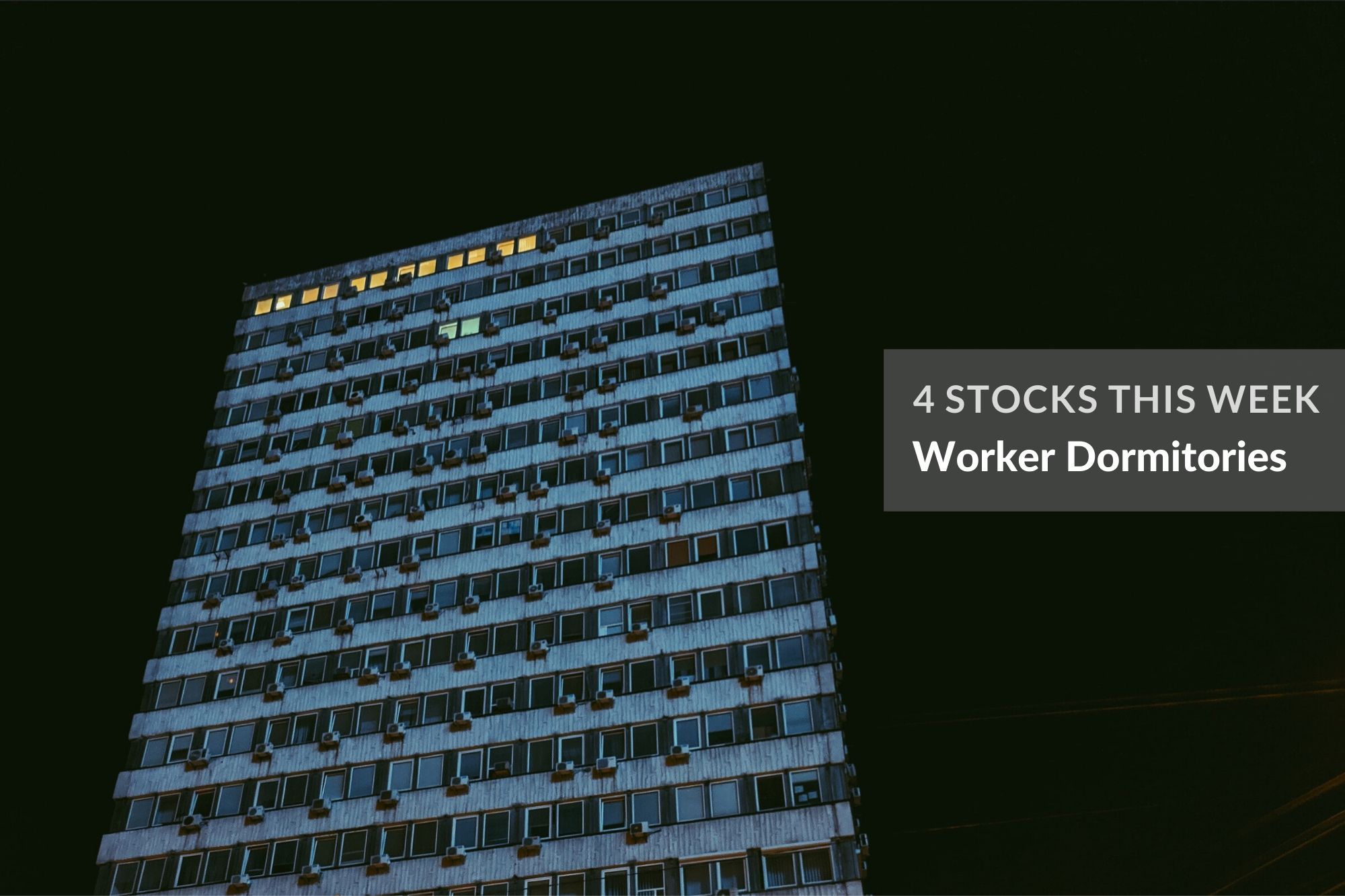 As Singapore nears the end of the (once extended) “Circuit Breaker”, daily new cases in the community has thankfully seen a steady decline to single digits, though worryingly, hundreds of new COVID-19 cases among foreign workers continue to be reported each day.

The majority of these foreign workers are housed in large purpose-built worker dormitories, which has since been gazetted as isolation areas and placed under full lockdown. The government has stated that the Singapore taxpayer will be footing the bill for the increased operating costs incurred by dorm operators as a result of these measures.

The dormitories have also come under scrutiny and criticism lately, with the Ministry of Manpower revealing that efforts to enforce and raise standards in the past were met with protest from employers, though improvements have been promised after the COVID-19 crisis passes.

For this instalment of 4 Stocks This Week, we’ll shine the spotlight on SGX-listed companies that run workers’ dormitories in Singapore, and discuss future prospects in light of COVID-19.

Read Also: COVID-19: Amid Medical And Economic Challenges, Here Are Some Silver Linings We Can Be Grateful For

The company started out in 1981 as an audio cassette tape manufacturer that listed on SGX in 1995, and underwent a reverse takeover in 2011. The company completed a dual primary listing on the Hong Kong Stock Exchange Main Board in 2017, where it trades under the ticker 6090.

In Singapore, Centurion’s portfolio of 4 worker accommodations is managed under the “Westlite” brand with a combined capacity of more than 20,000 beds. The properties are ASPRI-Westlite Papan near Jurong Island (7,900 beds), Westlite Woodlands in Woodlands (4,100 beds), Westlite Juniper in Mandai Estate (1,900 beds), as well as Westlite Mandai, which is a joint-venture with Lian Beng and also located in Mandai Estate (6,300 beds)

In a 14 May 2020 announcement, the company said that it saw a 13% growth in core business Y-o-Y, mainly due to increased portfolio capacity from Westlite Juniper being operational in 3Q2019 and other student accommodations being up and running. Worker accommodation revenue for 1Q2020 was $22.841 million, which represented a 15% increase Y-o-Y.

The company states that it anticipates an increase in debt delinquencies and longer collection cycles, due to employers’ businesses be impacted by the COVID-19 crisis, while the company might need to address future requests for rental waivers, discounts and deferment of payments by employers.

Read Also: Reverse Takeover: What It Is And What Investors Need To Know

Founded in 1977, the Singapore-based King Wan Corporation is primarily in the business of providing mechanical and electrical (M&E) engineering services to contractors in Singapore engaged in public and private residential property development.

Besides it’s M&E and portable lavatories segments, the company also has an Investment Portfolio Segment, which does vessel ownership and chartering, property development, and operation of workers’ dormitory. For the latter, the company does so via its 19% stake in Nexus Point Investments, which owns and operates the 9,180-bed Tuas South Dormitory.

Tuas South Dormitory started operations in 2016 and is one of the largest purpose-built workers’ dormitories in Singapore.

In its latest annual report, the company expressed optimism that with the continued development of industrial and commercial facilities in the western part of Singapore, demand is expected to strengthen over the next few years, which has the potential to boost occupancy and rental rates.

Established in 1972, Tiong Aik (TA) Corporation was listed on SGX in 2011 and is principally engaged in the construction and sale of residential and other types of properties, including complementary services such as steel fabrication, metal works, air conditioning systems and mechanical ventilation systems, as well as operating a worker training and test centre in Chennai, India.

The company also has a 62% interest in the abovementioned Nexus Point Investments, which owns and operates the 9,180-bed Tuas South Dormitory. The company stated that it will continue to further improve rental and occupancy rates by strengthening its marketing efforts given the tighter requirements on foreign workers’ accommodation.

Despite challenging market conditions and operating environment, the worker dormitory segment saw recorded revenue of $22.5 million for FY2019, accounting for 11.3% of group’s revenue.

Read Also: 3 Key Financial Ratios Investors Should Look At Before Investing In A Company

The company also builds and operates the mega 16,800-bed Tuas View Dormitory via its 60% interest in Active System Engineering. The company reported that occupancy rates slid to about 75% as at 31 March 2019, and cited keen competition as the main factor.

For financial year ended 31 December 2018 (FY2018), total dividends amounted to 0.8 cent per ordinary share, or about $7.4 million in total dividends, representing a payout ratio of about 29.4%.

COVID-19 Stock Market Crash: Why I Always Prefer The S&P 500 Over The Straits Times Index
20 Investment Platforms Singaporeans Can Use To Invest A Fixed Monthly Sum