COVID-19 Stock Market Crash: Why I Always Prefer The S&P 500 Over The Straits Times Index

Examining data on how each index performed during and after a market crash. 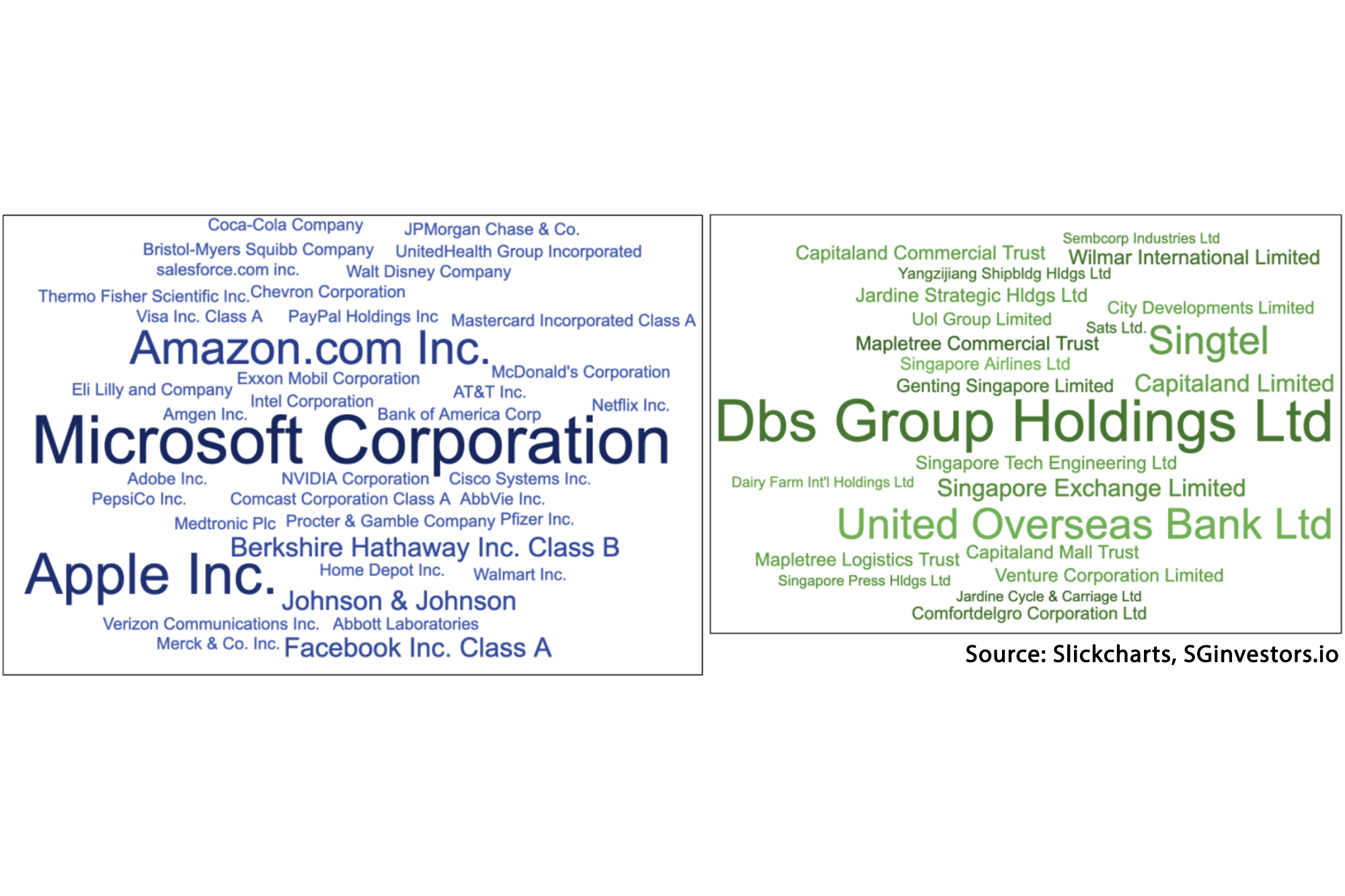 In April last year, I wrote an article about why Singapore’s Straits Times Index (STI) is a bad passive investment strategy. In that article, I described my bad experience investing in the STI and explained how the STI had significantly fallen short of the performance of other indices like the S&P 500.

Since the outbreak of the COVID-19 and the eventual stock market crash in mid-Feb 2020, I have been observing the relative performance of both the STI and S&P 500.

Today, I am even more convinced not to invest in the STI.

In today’s financial markets, a major crash in the US or Europe would likely to have a serious spill-over to Singapore immediately. As such, when the US stock market (represented by the S&P 500) crashed in the mid of February 2020, the STI also crashed in tandem.

Both indices dropped sharply by about 32%-34%, at about the same time frame from its 6-month highs. It is noteworthy that the STI started its descent earlier, largely because COVID-19 hit Singapore much earlier than the US.

The point I am making at this juncture is this: In a major stock market downturn, the STI will be hit at the same magnitude as the S&P 500. This should also dispel the myth believed by some investors that the STI is more resilient to market crashes than the S&P 500.

Since COVID-19 outbreak, there was a severe financial market crash and global economic disruptions due to country-wide lockdowns.

Governments across the world reacted swiftly to cushion the economic impact of these lockdowns. The US Federal Reserve committed USD$2 trillion in funding, also termed as Quantitative Easing (QE) Infinity.

Today, the stock market has recovered significantly and quickly from its lows in mid-March 2020.  It is also an opportune moment for us to compare the relative performance of the STI and the S&P 500 in this rebound.

With reference to the charts below, as at 11 May 2020, the STI has recovered from a massive -32% crash to a -21% decline from the pre-COVID-19 highs. On the other hand, the S&P 500 has recovered to -13% of its recent peak. While one might argue that a 8% gap is not materially different, we should all realise two key points:

1) The STI crashed at the same speed (or even faster) and same magnitude than the S&P 500.

The performance gap between the two indices worsens significantly when you look at a longer time horizon back in 2007, before the Global Financial crisis in 2007-08: 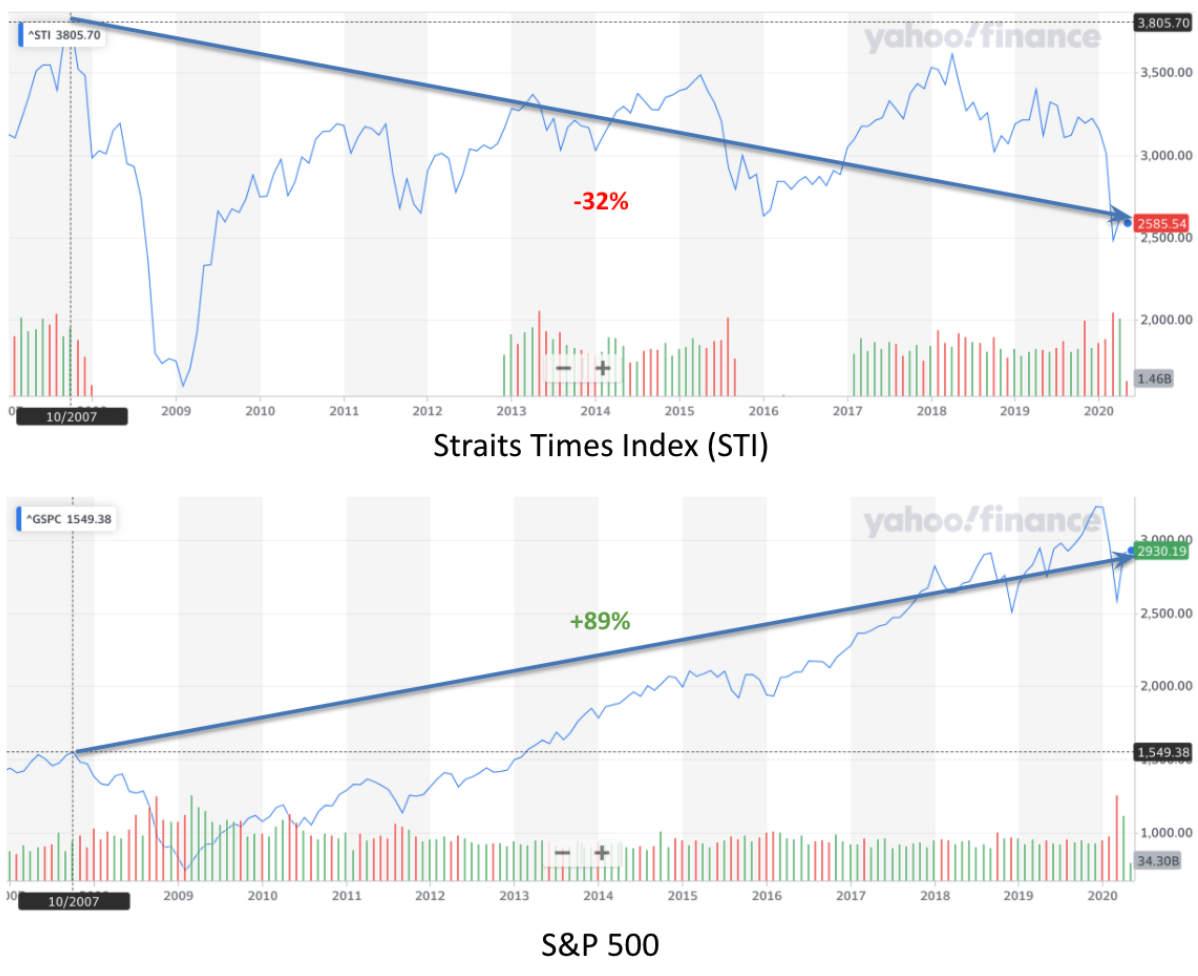 Stunningly, the STI has never recovered from its historical peak of 3,805 points in October 2007! At today’s levels, it stands at a shortfall of -32% from this peak.

The S&P 500, on the other hand, has recovered quickly from the Global Financial Crisis of 2007-08 and grown from strength to strength since then, going on to break its historical highs again and again.

Even if you were unlucky and invested in S&P 500 right before the crash of October 2007, if you held the investment till today, factoring in the COVID-19 massive crash, you would still have made a whopping +89% appreciation.

The question is this: Why is the STI’s performance so bad relative to the S&P 500?

To me, the answer lies in the design of the S&P 500 index and the fact that S&P 500 component stocks are far superior than that of the STI. Let me explain. If you were to look at two brand maps of the STI composite stocks and the top S&P 500 companies, you will see that the quality of the global brands is many notches higher than even the top STI companies.

The S&P 500 is also well-diversified, with 50% of the capitalisation of the index being spread across the top 41 companies, many of which have global footprints. The S&P 500 also consists of companies in highly-diversified sectors, including many high-tech and high-growth companies.

In contrast, the STI is heavily weighted toward the top 5 companies which constitute 50% of the index; namely DBS, UOB, OCBC, Singtel, and Jardine Matheson. These 5 companies are largely operating in the Banking and Telecommunications sectors, among others, which have reached maturity or are even in a state of decline.

There are no high-growth companies like high-technology or internet companies among these 5 companies, while diversification of stocks and their business markets is far lower than those in the S&P 500, with the majority of the businesses of STI companies being concentrated in Singapore or at best within Asia.

In many of my 1M65/4M65 CPF ($1 million in CPF by age 65/$4 million in CPF as a couple by age 65) strategy talks, many attendees often ask me how to get a good return for their CPF Ordinary Account (OA) funds or their cash savings once their CPF Special Account is maxed out.

My recommendation for ordinary investors has always been to invest their CPF OA monies or their spare cash in a passive investment instrument that compounds well over time. Based on historical returns of 6-8% over a long time horizon, the S&P 500 would be a good candidate for such a passive investment instrument. I would think it is very risky for investors to count on the STI to perform this role.

Loo Cheng Chuan, is the Founder of the 1M65 Movement. He developed the 1M65 ($1 Million By 65 Years Old) CPF investment strategy to help Singaporean couples to become millionaires at retirement. He was one of the few non-civil servants to be awarded the Public Sector Transformation award in 2018 for his 1M65 efforts. You may learn more about him on his website or join his Telegram Channel.

Editor’s Note: For an interactive discussion on the topic, you can also watch this video between Loo Cheng Chuan and DollarsAndSense Managing Editor Timothy Ho: