The entire world’s eyes are on Redditors, GameStop and Robinhood. What happens next is anyone’s guess. 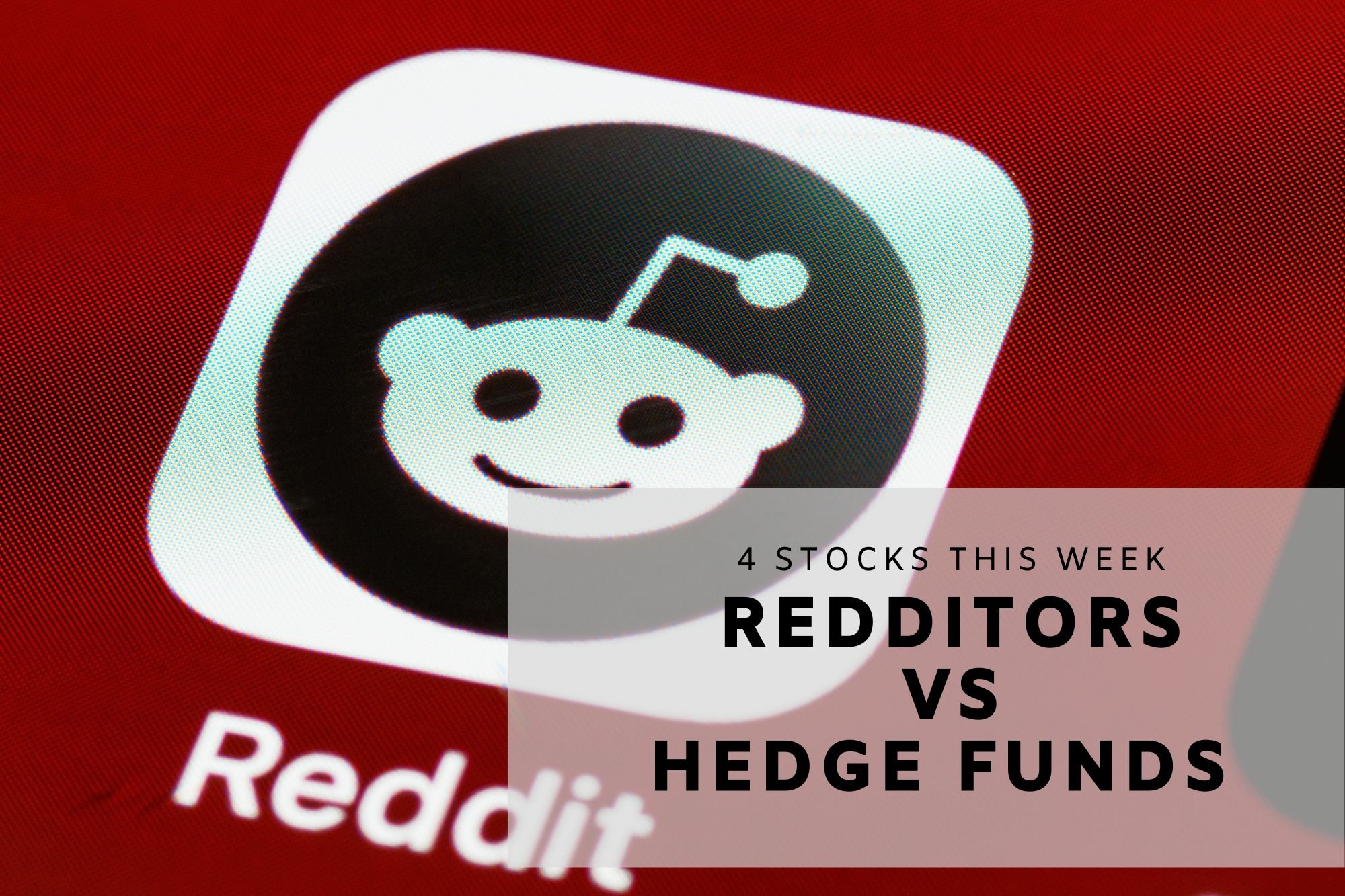 Followers of our regular 4 Stocks This Week column will likely have at least seen some of what’s been happening with the short squeeze led by the WallStreetBets Redditors. This has led to wild fluctuations in stock prices, as well as caused widespread confusion and havoc on financial market participants.

TLDR version of what’s happened (which is really insufficient to give you a full picture):

What happens next is anyone’s guess. But everyone’s eyes are on this. Before we get carried away (and write an actual news piece!), here are the 4 stocks backed by the Reddit Army:

Read Also: Selling Stocks You Don’t Even Own – Should Short Selling Be Made Illegal?

Perhaps the most popular stock among all for this saga, GameStop (NYSE: GME) is what really led the “high street VS Wall Street” movement.

Whether it’s relevant or not, GameStop is actually a gaming retailer with 5,509 stores across the US, Canada, Europe, and Australia.

The company sells video games, gaming consoles and computers, television sets, mobile phones, and other gadgets and accessories. COVID-19 delivered a setback as consumers stayed away from its outlets.

Notwithstanding this, you can see its price was hovering at around the US$4 to US$20 range in the last 6 months. It was only in the current 2-week period when it share price skyrocketed 1630% to US$325 a share. You can also see the wild swing in between when it lost close to 40% of its value and then quickly gained it back the next day. AMC’s (NYSE AMC) share price follows a very similar trajectory to GameStop’s share price. Its share price was hovering between US$4 and US$2 in the past 6 months before the current week. It then soared over 900% to close to $20.

For those who have heard of AMC but don’t know what it does – here’s why it was such a target for short-sellers. AMC operates over 1,000 theatres and has over 11,000 screens in 15 countries. It is a movie theatre chain.

It is precisely the kind of business that COVID-19 has decimated. This was what attracted short-sellers. Nokia (NYSE: NOK) is listed on the New York Stock Exchange (NYSE), on the Euronext Paris, and in its native Helsinki.

While it has also become a meme stock, it is unlike the earlier two stocks – in that it isn’t a stock that got battered because of COVID-19. In fact, the only way Nokia (and perhaps another meme stock Blackberry as well) is attracting attention from the Reddit army is because their stocks are getting pummelled.

This legacy telecommunications stock is getting another lease of life as its share price has recovered 41% from November 2020 lows. Notwithstanding this, the stock is still down from 6 months ago.

Uniquely, this shows that any stock getting hammered lower can become a target of Reddit rescuers, which will likely deter short sellers from in more ways. Top Glove (SGX: BVA) has a secondary listed on Singapore’s SGX. It is also a  stock we’ve covered extensively in the past as a COVID-19 play. In the past few months, vaccination developments and other company-specific news has dragged the company’s share price down.

As you can see in the 6-month chart, prices are sharply lower. However, the 5-days chart shows why Top Glove made it into this list. On 29 January, shares in Top Glove spiked sharply, by 10% to $2.22.

Also, in case you’re wondering how WallStreetBets got wind of Top Glove in this part of the world, they didn’t. What’s happened is that Redditors are coming alive globally, and the movement has inspired Malaysians, with their own BursaBets, to invest heavily into Top Glove – a stock that has been battered in recent times. 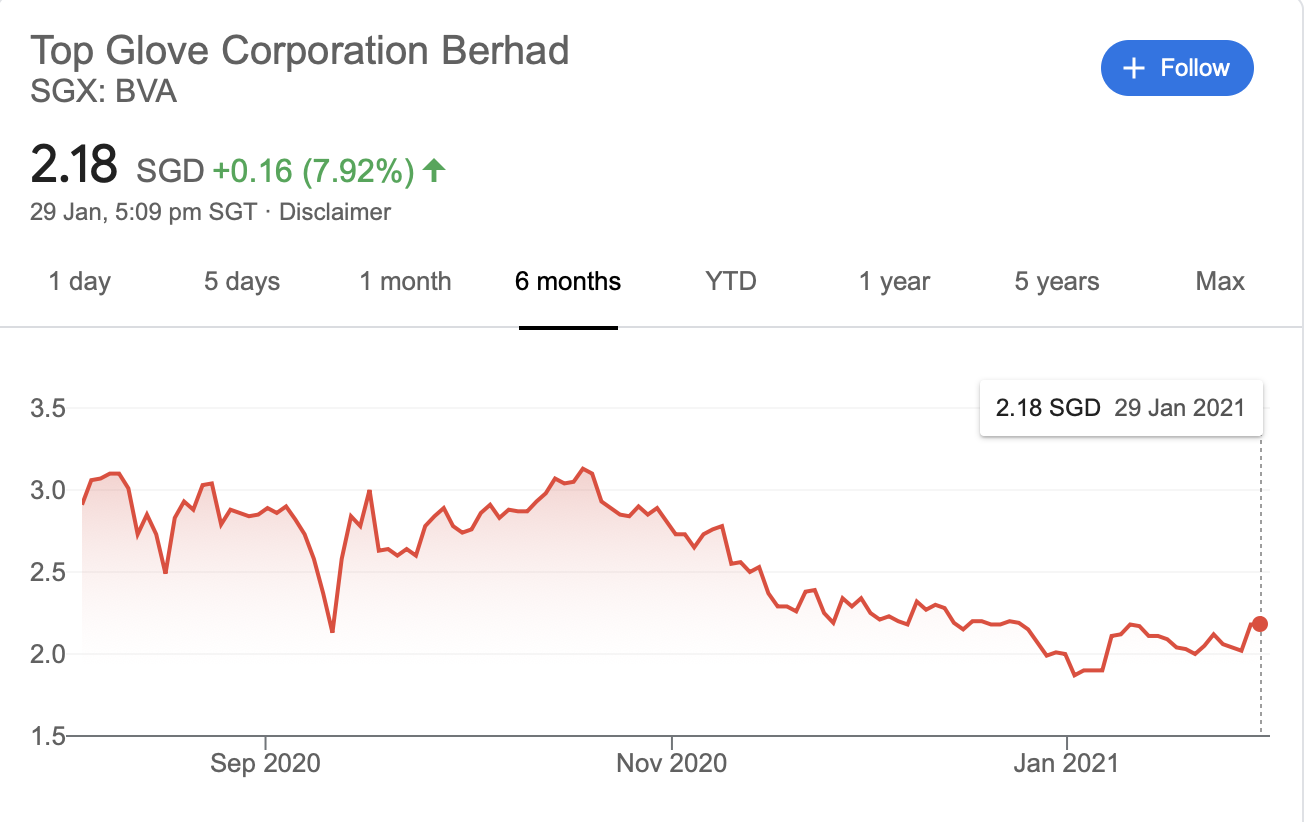 Do Not Blindly Invest

While it is admirable for small retail investors to band together to take on the world’s largest hedge funds, we must remember that we still owe our future selves a retirement plan. Putting some money into YOLO or FOMO or to stick it to the rich can be fun and romanticised – but it does not replace prudent financial investment for the long-term. We also have to consider the possibility the reality that we are being duped into a pump and dumb scheme.

Perhaps the best way to stick it to the rich is to always buy from small local companies, even if they are more expensive. If we want to and have the stomach to do it with thousands of dollars, why not support a real small business owned by someone you know in your community.

5 Digital Currencies You Can Invest In Besides Bitcoin (And Their Performance In 2020)
GameStop Short Squeeze: 5 Things To Know As We Reach The Endgame