Bukit Merah, Geylang, Tengah, and Woodlands. Expect an increased wait time of about 4 to 6 years for this round of BTO flats 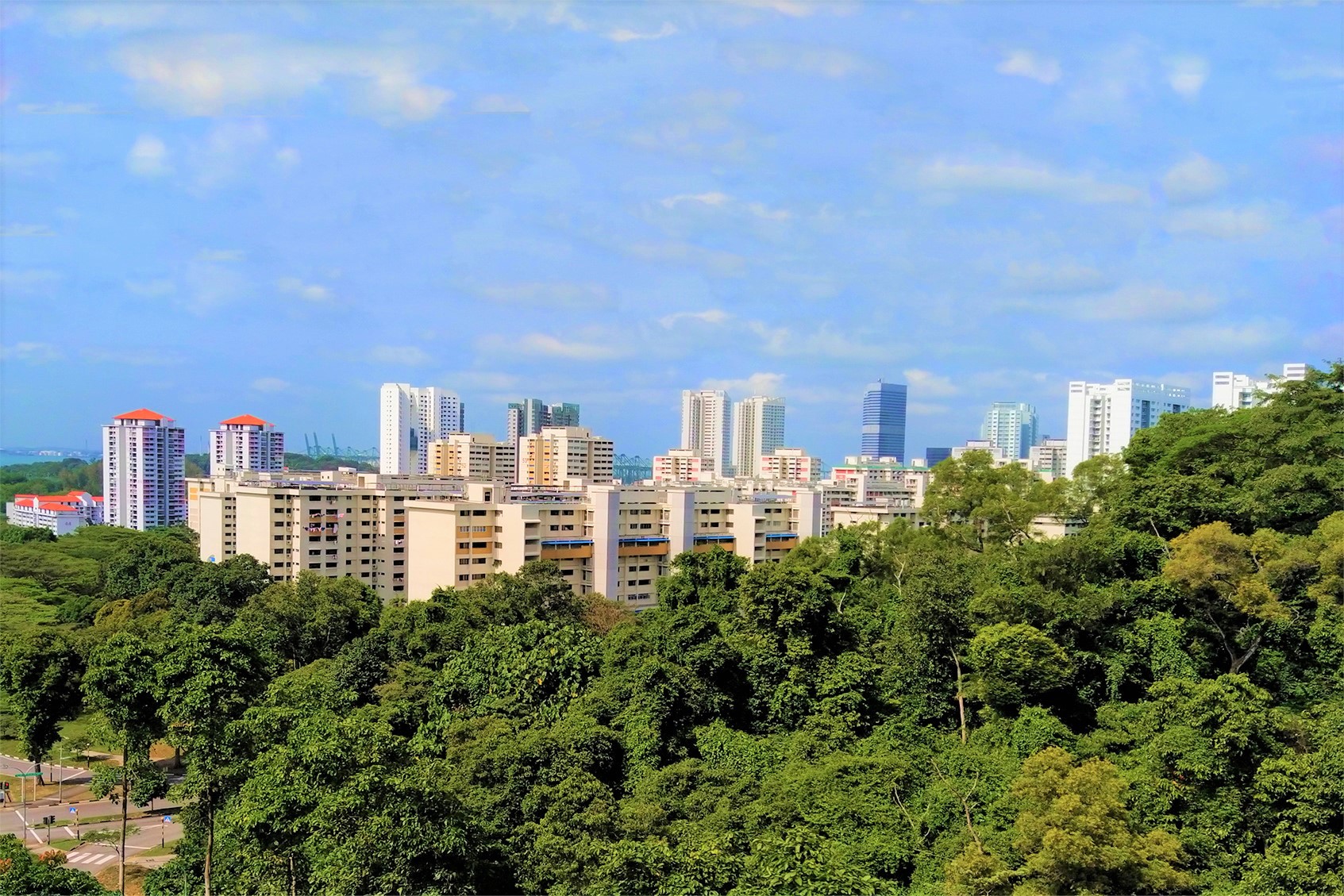 Applications for the May 2021 BTO Launch is now open until 31 May 2021 11:59pm. May your ballot be successful. This article was originally published on 4 May 2021 and updated with the latest information.

Every year, HDB releases 4 BTO sales launches. May is the second HDB BTO sales launch this year. For couples and families looking for affordable housing, BTO flat prices are looking even more attractive amidst the soaring resale and private housing prices.

With the current construction delays due to COVID-19-induced manpower shortages, those who are applying for their BTO flats should expect their flat completions to be about 4 to 6 years away.

The May 2021 BTO launch comprises 4 projects in Bukit Merah, Geylang, Tengah and Woodlands with a total offering of 3,870 units. This launch is also hosted on the new HDB Flat Portal with a new layout and format.

The smallest project in this launch, the Bukit Merah site has only 175 (yes, only 175) units of 3-room and 4-room flats. This is a single-block development: a 38-storey residential block with integrated commercial facilities located on the lower floors 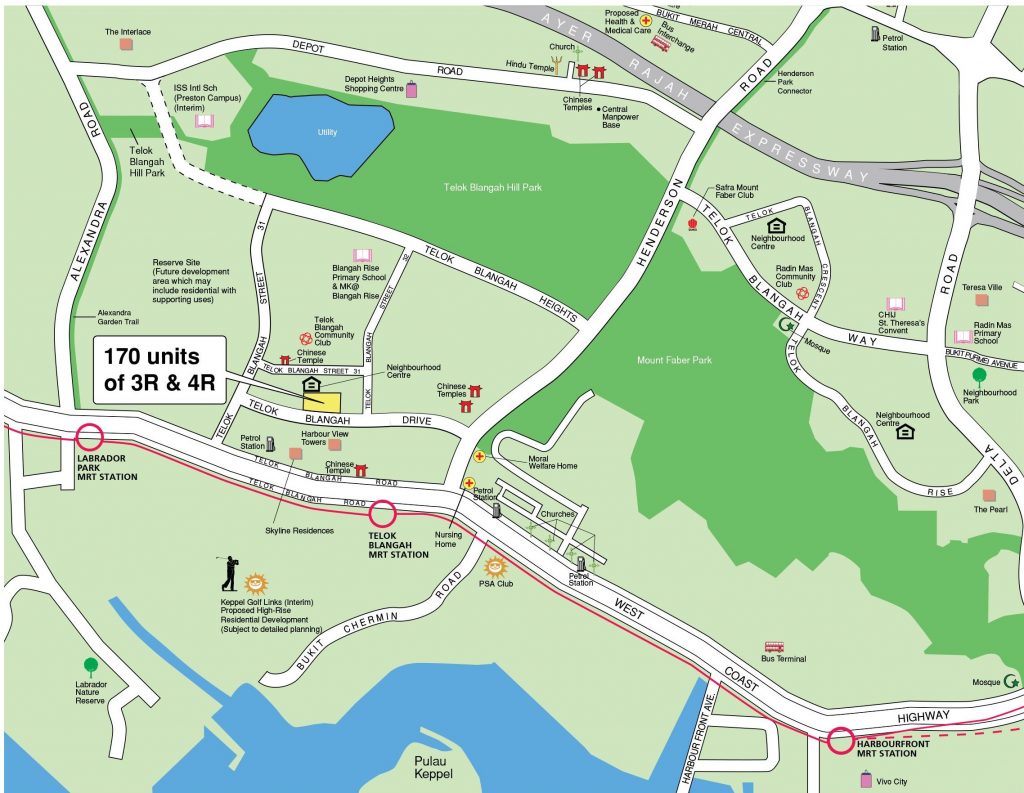 Towering above its neighbours, Telok Blangah Beacon is located in the prime location in the heart of Telok Blangah. According to HDB, this development will introduce a new community plaza, supermarket, market and hawker centre to the existing neighbourhood centre and pedestrian mall. It is also within the 1km intake zone of Blangah Rise Primary School and [email protected] Rise.

The site is situated between Labrador Park MRT and Telok Blangah MRT, with Telok Blangah MRT being a slightly shorter walk of about 10mins. The nearest large retail mall is Vivocity which is a short bus ride away.

The area is also likely to benefit from the future development of the Greater Southern Waterfront. While the blocks of condominiums along Telok Blangah Drive and future development would likely block off much of the greenery and sea view, this site is currently one of the closest public housing located near to the golf course (Keppel Club would be redeveloped as part of the Greater Southern Waterfront) and Labrador Nature Reserve.

Amenities rating: 1 star out of 1 star, if a heartland town centre is good enough for you. While there is no snazzy retail mall anchoring the town centre, there is a food centre, market, supermarket, community centre. Vivocity is your nearest bet for a full-on retail experience. Nature-lovers will also enjoy close access to the Southern Ridges, Mount Faber, Telok Blangah Hill Park and Labrador Park.

However, parents with young children may want to think twice as there is only one primary school and one MOE kindergarten in the immediate area. Radin Mas Primary School and CHIJ St Theresa’s Convent are also in the wider vicinity. Those averse to Chinese temples should also look elsewhere as there are 4 Chinese temples in the vicinity, which could lead to potential traffic congestion during religious events.

Accessibility rating:  0.5 stars out of 1 star. The nearest MRT (Telok Blangah MRT) is almost 10 mins away. However, drivers may find easy access to the West Coast Highway convenient. Bukit Merah/ Telok Blangah is a city fringe location that enjoys a relatively short commute to the CBD.

Affordability rating: 1 star. Mature estates tend to be on the pricey end for BTO flats. However, BTO prices are likely to be much more affordable compared to resale flats. The towering height of this development is likely to make for spectacular views on the higher floors. This may be well worth the additional price.

While in the Geylang estate, this is probably better termed as being in MacPherson. The standout feature of this site is its close proximity to MacPherson MRT.

This is the second-largest project in the May 2021 launch, comprising 1,382 units of 2-room Flexi, 3-room and 4-room flats, spread across 7 blocks ranging from 15 to 19 storeys in height. Unsurprising for a mature estate, there are no 5-room flats in this project. 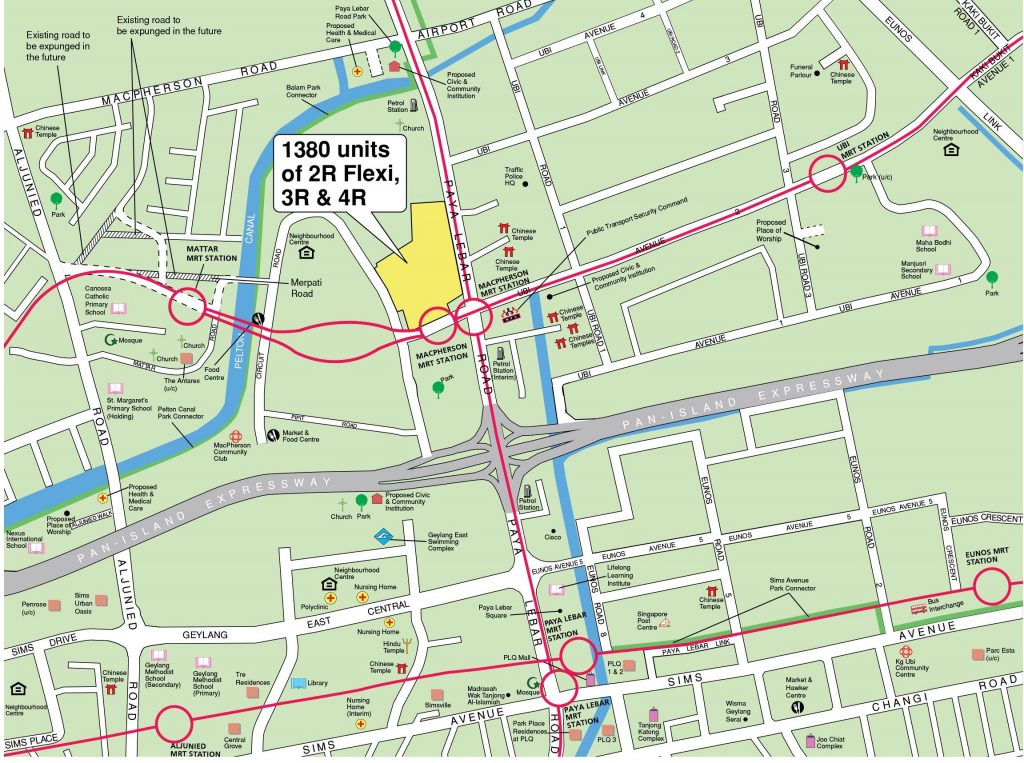 However, the drawback to this location is the relative lack of amenities, despite its mature estate status. MacPherson has been known more for its industrial estates than its amenities. The development will bring a new childcare centre and resident’s network centre to the area. There are two food centres nearby, Circuit Road Market & Food Centre and MacPherson Market & Food Centre. A further walk south is Geylang East neighbourhood centre where there are more amenities such as supermarkets, fast food and swimming complex.

Amenities rating: 0.5 stars out of 1 star. Aside from the two food centres, there is nothing of note around MacPherson MRT. However, just one MRT station away is PLQ Mall, Paya Lebar Square and SingPost Centre which can fulfil most retail needs.

Depending on the finalised block location, this site may also be in the 1 km intake zone for Canossa Catholic Primary School and St Margaret’s Primary School.

Accessibility rating:  1 star out of 1 star. Accessibility is the star feature of this site. Being next to MacPherson MRT and the quick access to the Pan-Island Expressway means that both commuters and drivers enjoy equal convenience in travelling around the island.

Affordability rating: 0.5 stars. Mature estates tend to be on the pricey end for BTO flats. That said, this development is better-priced than Telok Blangah Beacon. In general, BTO prices are likely to be much more affordable compared to resale flats.

Ballot for this: If you want the accessibility. Ballot even harder for this if you work in the nearby industrial parks. With 2-room Flexi units offered at this site, young couples can tap on the Married Child Priority Scheme (MCPS) and Multi-Generation Priority Scheme (MGPS) to increase their ballot chances.

After multiple rounds of HDB BTO launches featuring Tengah, this is a slightly smaller project offering with only 782 units of 2-room Flexi, 4-room and 5-room flats, spread across 7 blocks that are 15 storeys in height. 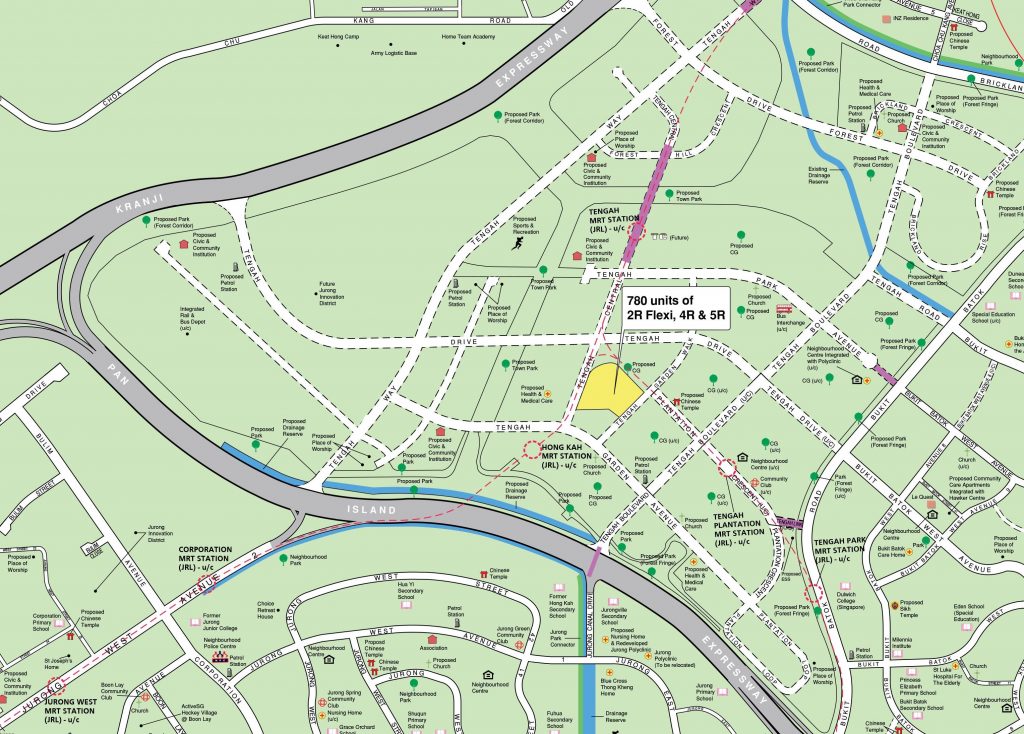 Being a completely new development, there isn’t much to discuss as everything is still in development. Regardless, Tengah has the potential for development, much like Punggol twenty years ago, and may become a desirable location in the future.

Amenities rating: 0 out of 1 star. While there are plans for development, these will take years to come to fruition. Additionally, much of the town centre developments are centred around Tengah MRT station with a neighbourhood centre next to Tengah Plantation MRT Station. Hong Kah MRT Station which is the station nearest to the site only has plans for the proposed health & medical centre.

Accessibility rating: 1 star out of 1 star. Hong Kah MRT Station is right next to the site. However, there’s no assurance that the line will be completed before or after the site completion.

Affordability rating: 1 star. Tengah is one of the most affordable sites during this launch.

Ballot for this: If you believe in the potential of Tengah to be the next Punggol and the potential appreciation. While the prices are likely to be highly affordable, the initial years of developing Tengah is likely to be tough on early residents. Be prepared to make plenty of visits to Jurong East or online deliveries in the meantime.

The largest project in this launch, the Woodlands site comprises 1,540 units across the various flat types: 2-room Flexi, 3-room, 4-room and 5-room flats, spread across 7 blocks ranging from 15 to 25 storeys in height. 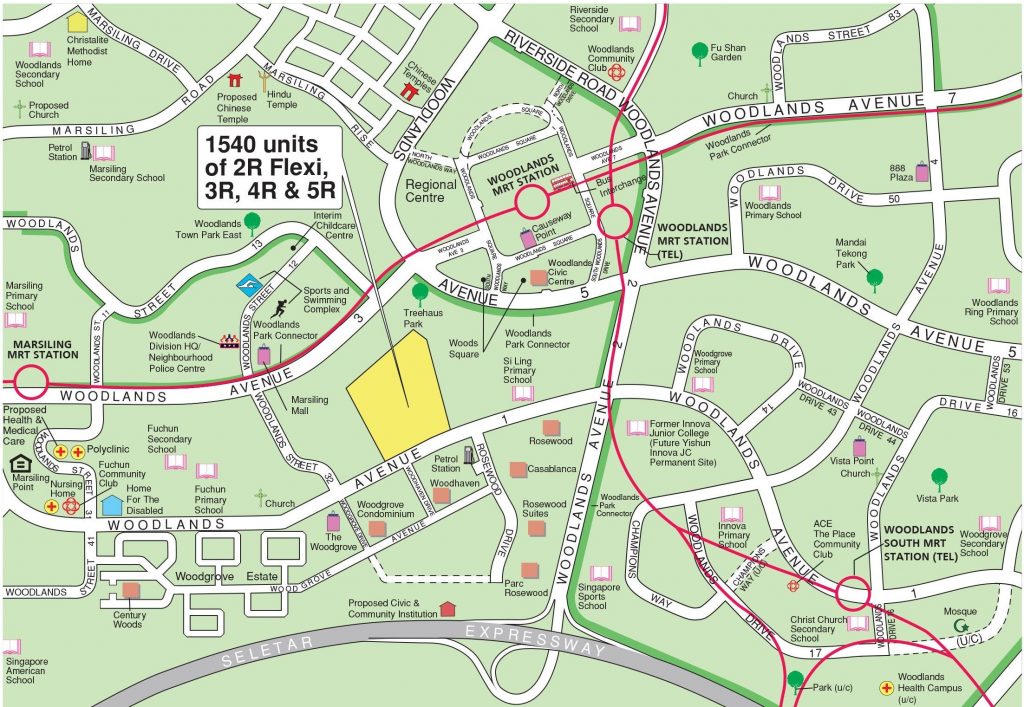 Located between Woodlands MRT and Marsiling MRT, with Woodlands MRT about 10 mins walk away, this site is along the same stretch as many private condominiums. On the positive side, the surroundings are likely to be quiet with a green border along the Woodlands Park Connector. Marsiling Mall and Causeway Point are also within walking distance. A childcare centre and residents’ network centre will also be located within the development.

Amenities rating: 0.5 out of 1 star. While the site is located in between two major hubs, it is still a walk away. Marsiling Mall and Woodlands Sport Centre are both near enough to satisfy the need for amenities. Si Ling Primary School and Fuchun Primary School are both within the 1 km intake zone while there are many other schools in the area for parents with school-going children to consider.

Accessibility rating: 0.5 stars out of 1 star. Being in between two MRT stations is neither near nor far. Be prepared for a walk or take feeder buses.

Affordability rating: 1 star. Woodlands is the most affordably priced development in this launch, even more affordable than the new town of Tengah.

Ballot for this: If you have a larger family with children. Of all the projects in this launch, this site is most likely to be suitable for larger families (due to the availability of 5-room flats) with school-going children (with the large pool of schools in the area). Families who want to increase their ballot chances can also apply using the Married Child Priority Scheme (MCPS) and Multi-Generation Priority Scheme (MGPS).