Bukalapak will serve as a litmus test to the risk appetite that investors have when it comes to an Indonesian tech business. 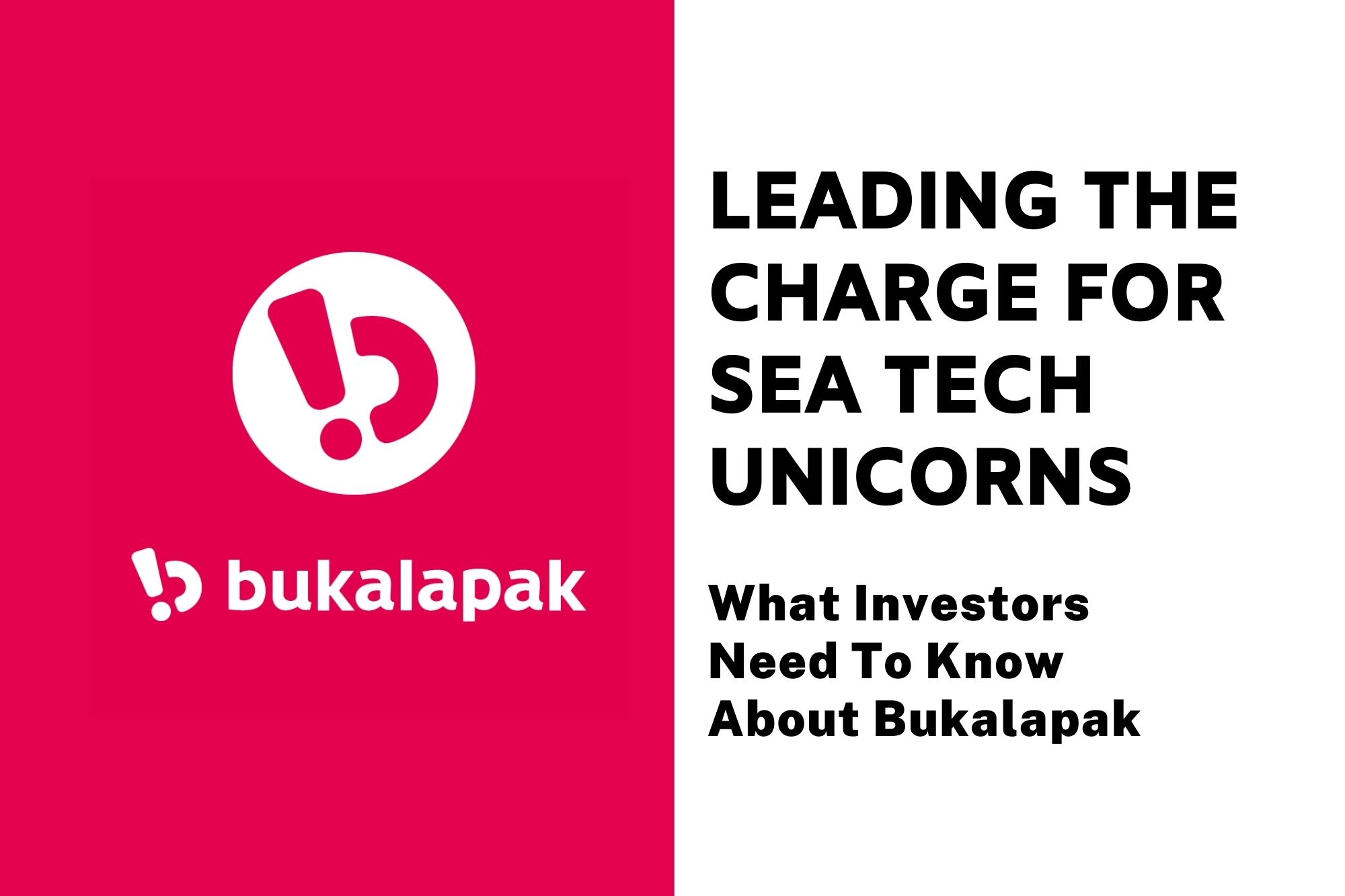 Bukalapak (IDX: BUKA) is an Indonesian e-commerce company that was founded in 2010 as an online marketplace enabler to allow small and medium enterprises to go online. The name Bukalapak, means ‘open a stall’ in Bahasa Indonesia. It has since expanded to support smaller traditional family-owned businesses in Indonesia called warungs.

Bukalapak was founded by Achmad Zaky, to help his neighbours and various small businesses (known as “warungs”). Together with his then classmates Nugroho Herucahyono and Fajrin Rasyid, they built Bukalapak’s website with about $5 in capital. The vision of the business was then: – changing the lives of many people by enabling small & medium enterprises (SME) to advance their businesses through selling online.

During a fundraising exercise in 2011, Zaky and the team had to introduce themselves to investors as the biggest bicycle marketplace in Indonesia. This was because internet businesses were nascent and there was not much deep understanding in that sector. After targeting bike enthusiasts. Zaky expanded to various categories such as photography and automobiles. The focus on the most profitable and understandable sector has led to a winning strategy, and Zaky mentioned that without this approach, the company would not have become what it is today.

Since then, the platform has expanded its shopping categories in its marketplace from physical goods to digital products, such as mobile data, financial services such as mutual funds and gold investments, and its online-to-offline (O2O) business called Mitra Bukalapak.

According to its prospectus, Bukalapak posted $95.8m in 2020 and had 104.9 million registered users, with 70% of transactions coming from outside the country’s Tier 1 cities. Riding on the tailwind for Indonesia’s $40 billion online shopping market, they have benefitted with many consumers staying at home and retail businesses pivoting from an offline to online strategy to deal with the Covid19 pandemic.

Some notable investors for Bukalapak include Alibaba affiliate Ant Group, Microsoft, as well as Singapore’s sovereign wealth fund GIC. Bukalapak is Indonesia’s No. 4 e-commerce firm and competitors include the likes of Tokopedia, Lazada and Sea’s Shopee. 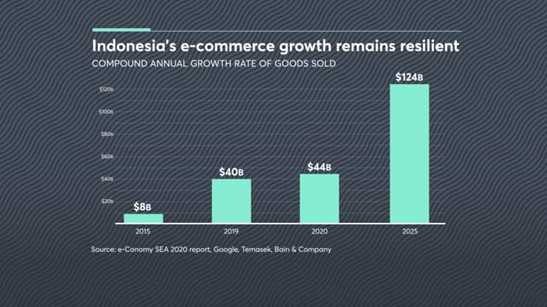 On its trading debut last Friday, 6th August, shares of Bukalapak jumped by nearly 25% in the Indonesia Stock Exchange (IDX). The initial public offering price of 850 rupiahs ($0.059) rose to 1,060 rupiahs. The company raised $1.5 billion, with the company’s valuation at $6 billion.

To date, this is Indonesia’s largest IPO.

The authorities at the Indonesia Stock Exchange (IDX) have also finalised a set of new regulations that will allow companies to list themselves and allowed the option of multiple classes of shares that carry different voting rights. This relaxation of curbs on loss-making companies has also allowed main beneficiary companies such as online marketplaces Bukalapak and GoTo to have the flexibility to list and leverage on new regulations.

Friday’s listing has shown how investors are reacting and their appetite when it comes to an Indonesian tech business and story. As one of the forerunners for upcoming listing on technology companies, it has also highlighted the bullishness that investors have for Southeast Asia.

Some prominent technology companies that were floated out as potential companies set to go public during the past few months include, but not limited to, are Ninja Van, Carro, Carousell, and Traveloka. Therefore, having Bukalapak lead the charge may also give retail investors a rough indication of how the stock might fare for the next couple of months before the next big name.

Investors around the world will also look at how Bukalapak performs in Indonesia ahead of a planned multibillion-dollar IPO of GoTo (Merger of ecommerce company Tokopedia and ride-hailing and payments company Tokopedia). Grab, the Singapore-headquartered company with various business verticals such as transportation, food delivery and digital payments services has also targeted to list at the end of this year on the NYSE through a SPAC merger. The spotlight on these Southeast Asian companies to provide outsized investment returns has also led to more private equity and venture capital funding into the region’s investments.

Read Also: China’s Regulatory Clampdown – What Is Next For Investors To Look Out For?

In January 2020, after a decade, Zaky stepped down as CEO. He handed the reigns to Rachmat Kaimuddin, a 41-year-old former banker. Kaimuddin previously served as the director of finance and planning at Indonesian financial services provider Bank Bukopin. Bringing his expertise in the fintech industry, he has also helped drive several initiatives, such as the partnership with Bank Mandiri, the country’s largest financial institution with a program to turn mom-and-pop kiosks into branchless banking agents. The collaboration allows customers visiting kiosks to transfer money. Zaky also continues to act as an adviser to Bukalapak.

The long-term strategy is to continue its transformation into an all-commerce platform through partnerships with companies that can offer other complementary services like financial transactions or logistics.

What Should Investors Look At?

Mitra Bukalapak, the offline strategy was introduced in late 2017. The term translates to “Bukalapak partner” where the company ties up with small offline business around the country. The Mitra program allows warung or roadside kiosk to sell Bukalapak-powered digital goods such as phone credits, train tickets, electricity tokens to offline customers. It also allows these offline businesses to purchase various FMCG products and inventory through the Mitra Bukalapak app where these goods are fulfilled directly by distributors on the platform.

Since inception, there has been more than 500,000 participating small businesses in the ecosystem. When the platform first launched, it relied on both unofficial distributors and partnerships with manufacturers to deliver goods to its partner warungs at the best prices. The platform has since established various partnerships with many FMCG manufacturers in Indonesia, where Bukalapak helps in smoothening and streamlining these manufacturers challenges to sellers at the end of the product chain.

The company also aims to roll out various business modules such as specific inventory management, bookkeeping and accounting tools for the different warung partners and to expand the types of businesses to work with – such as small businesses that sells items through social media platforms. Therefore, digitalization of these businesses will only lead to a net benefit for both the economy and the government in an enlarged viewpoint.

Based on a February 2019 study by McKinsey on Digital Banking in Indonesia, it has shown that Indonesian banking customers are among Emerging Asia’s most enthusiastic adopters of digital banking. Majority of respondents has also expressed confidence that they would shift 25 to 50% of their balance to a pure digital bank.

This presents an opportunity to technology companies such as Bukalapak where through its various projects has entered the space of financial technology services through products such as e-wallet BukaDana, mutual funds platform BukaREksa, and teaming up with other Indonesia P2P lending startups such as Amartha, Modalku, and PohonDana to provide loan facilities in a program called Modal Mitra. These loans are available to offline vendors who are part of the Mitra Bukalpak program. Model Mitra can be used by vendors as additional; capital to purchase inventory, thus increasing the volume and variety of goods which is optimal for the entire Bukalapak commercial ecosystem.

By having these fintech services and products made available to a wider range of consumers, creates accessibility and value to more users from beyond major cities and socioeconomic backgrounds who might be underbanked or unbanked.

Embracing the Indonesian Gotong-royong (mutual collaboration) spirit to improve and grow. This is one of Bukalapak’s core values. Striving to build a community where each individual strengths contribute to the whole, with the belief that the company is greater than the sum of our parts. There is also a focus of having each other’s back, and focusing on learning together instead of pointing fingers and finding whom to blame when issues happen.

Bukalapak has spent years developing and refining the culture from the bottom up, where the Indonesian culture is always at the ethos and the core of the heart and mind.

An internal article published by an employee at Bukalapak gives us an internal glimpse into how’s it like working in one of Indonesia’s fastest-growing company.

Culture of Customer Obsession – where our eagerness to hear and understand what our customers need, our obsessions over listening to the pain points that they have, and our perseverance in delivering tech products that not only eliminate those pain points but also spark joy to our customers, is one of the key strengths that set us apart.

Building Top Tech Talents – having a consistently high hiring bar with a focus on attracting the best and brightest tech talents to join the company. In the sharing, it has been said that more than 99% of tech talents that applied to Bukalapak failed the stringent selection process. This keeps the quality consistently high and there is no compromise as that’s one of the key driving forces behind the company’s growth.

Delivering Empowerment and Making a Difference – one of the main reasons why employees joined Bukalapak is that they resonate with Bukalapak’s mission of empowering Indonesia with tech. The company’s belief is that small teams can make a huge impact if the right amount of freedom, trust, and support is given. Therefore, in order to do so, Bukalapak strives to provide the right environment for the team to flourish.

Southeast Asia As The Next Bed Of Growth For Tech

An article published by the Economic Board of Singapore (EDB) has shared its views on the strong growth momentum of Southeast Asia’s tech sector.

Most importantly, companies have also shifted their attention towards the region looking out for the next big thing. Bukalapak, by being one of the forerunners of a successful IPO story could also jumpstart more momentum and attention to Indonesia’s exchange.

As Bukalapak enters into the next decade of business operations, it would be interesting for shareholders to continue monitoring its execution performance, especially so where in the next couple of months the markets will be welcoming similar company’s such as Grab and GoTo where they compete in similar sectors and businesses.

Guide To REIT ETFs In Singapore
Investing With StashAway: How You Can Build Multiple Portfolios Through A Single Robo-Advisor