What Happens To Your CPF Savings When You Pass On?

Unless you specify otherwise, your CPF nominees will receive your balance CPF savings in cash. 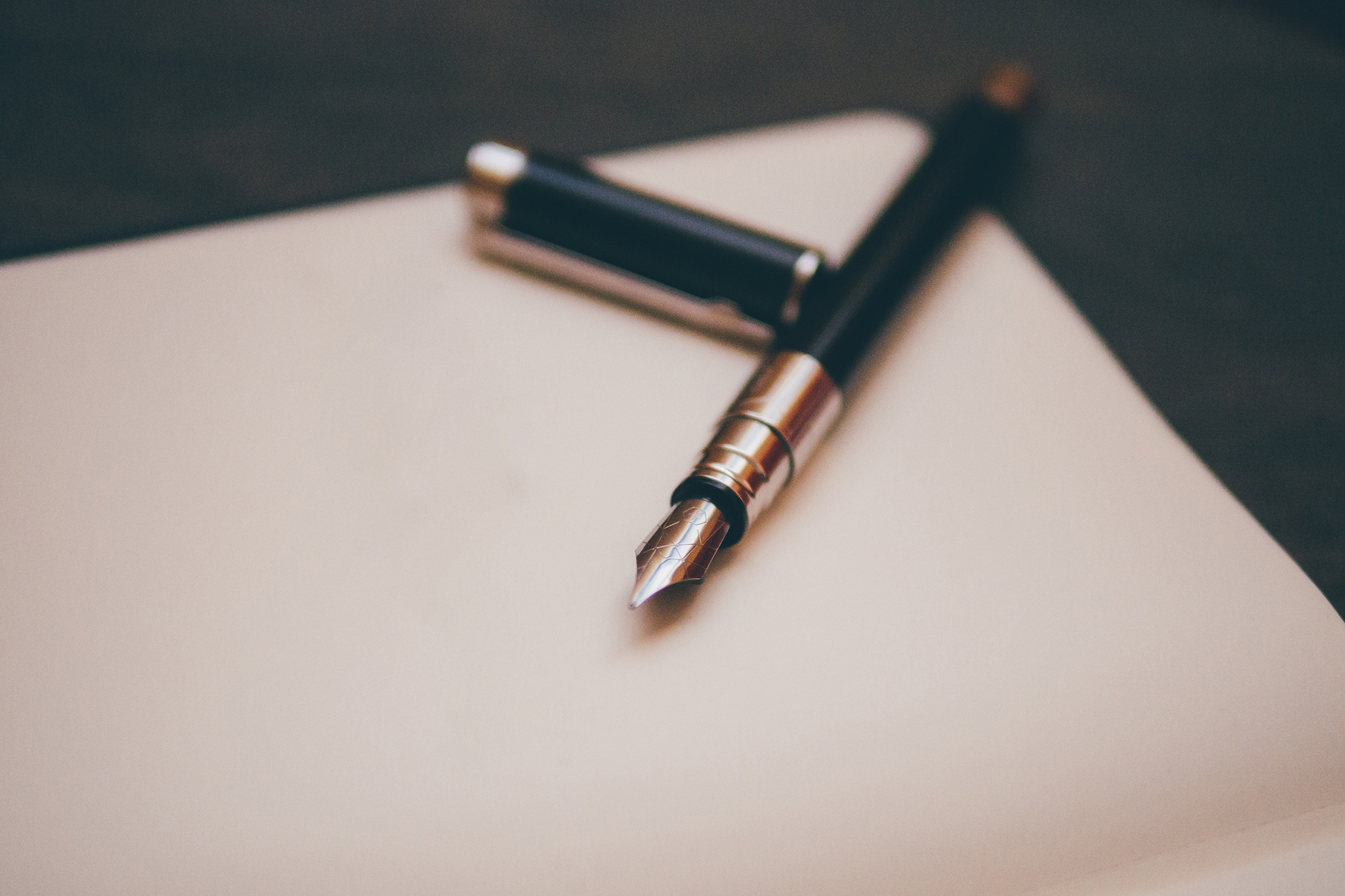 You (or your parents) may have received WhatsApp messages about what would happen to your CPF monies (including your MediSave) when you pass on. Depending on which version of these messages you receive, some of these (fake) claims include your CPF monies going to the MediSave accounts of your Next-Of-Kin (NOK), or that your unused MediSave savings goes to the government. 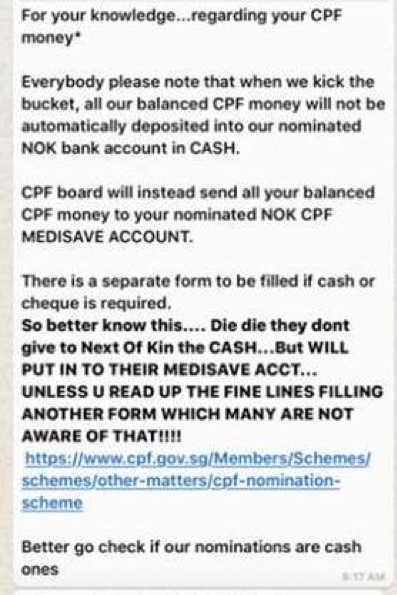 The first thing to take note is that the message above, and other variations of it, are fake and baseless. As clarified by gov.sg, the default nomination that your NOK/nominees will receive will be in cash.

So, unless you specify otherwise, CPF will pay out your CPF savings to your nominees in cash via cheque or GIRO.

What Are The Different Types Of CPF Nomination?

As stated in the CPF website, there are three options that you can choose for how your CPF nominees should receive your balance CPF funds. They are:

(2) Enhanced Nomination Scheme (ENS) Nomination: Your nominee(s) will receive the CPF savings due to them in their CPF accounts.

Besides the possibility that such messages were deliberately created to cause confusion and fear-mongering among Singaporeans, it’s possible that such claims originated due to incomplete understanding of how the CPF Nomination Scheme works.

How Does The CPF Nomination Scheme Work?

CPF Nomination covers your CPF savings in your Ordinary, Special, MediSave and Retirement Account. It also covers any unused CPF LIFE premiums which were used to pay for your CPF LIFE, as well as any discounted SingTel shares that you may have. These are assets which are excluded from your will, if you have one.

Read Also: Why Do Older Singaporeans (Who Never Bought Stocks) Have SingTel Shares In Their CPF Account?

As explained by the CPF Board, making a CPF nomination is neither a requirement nor even necessary. This is because similar to how your assets are distributed if you pass on without leaving a valid will, the entire savings in your CPF accounts will be distributed by the Public Trustee to your family members according to the intestacy law or the Certificate of Inheritance (for Muslims).

However, you may want to make a CPF nomination for the following circumstances.

Reason 1: You have a separate will prepared

If you would like for your CPF savings to be distributed in a similar way to how your will distributes other financial assets that you have, you need to make sure that your CPF nomination is done in a way which is in accordance to your wishes, rather than for it to be distributed based on the intestacy law.

Reason 2: You are a divorcee

When you marry your spouse, your spouse will automatically be included as a beneficiary. This of course is in accordance to the intestate succession act. Any earlier nomination made before the marriage will be revoked when the marriage is registered. If the CPF member would like to revert back to the original nomination, he/she will need to do a new nomination.

If you do remarry, then any earlier nomination made to the ex-spouse will automatically be revoked by the new marriage, with your new spouse included as a beneficiary.

Since making a CPF nomination is something that some Singaporeans may want to do, as per the reasons mentioned above, the CPF website provides the information that you need to know, as well the forms and instructions on how this can be done. 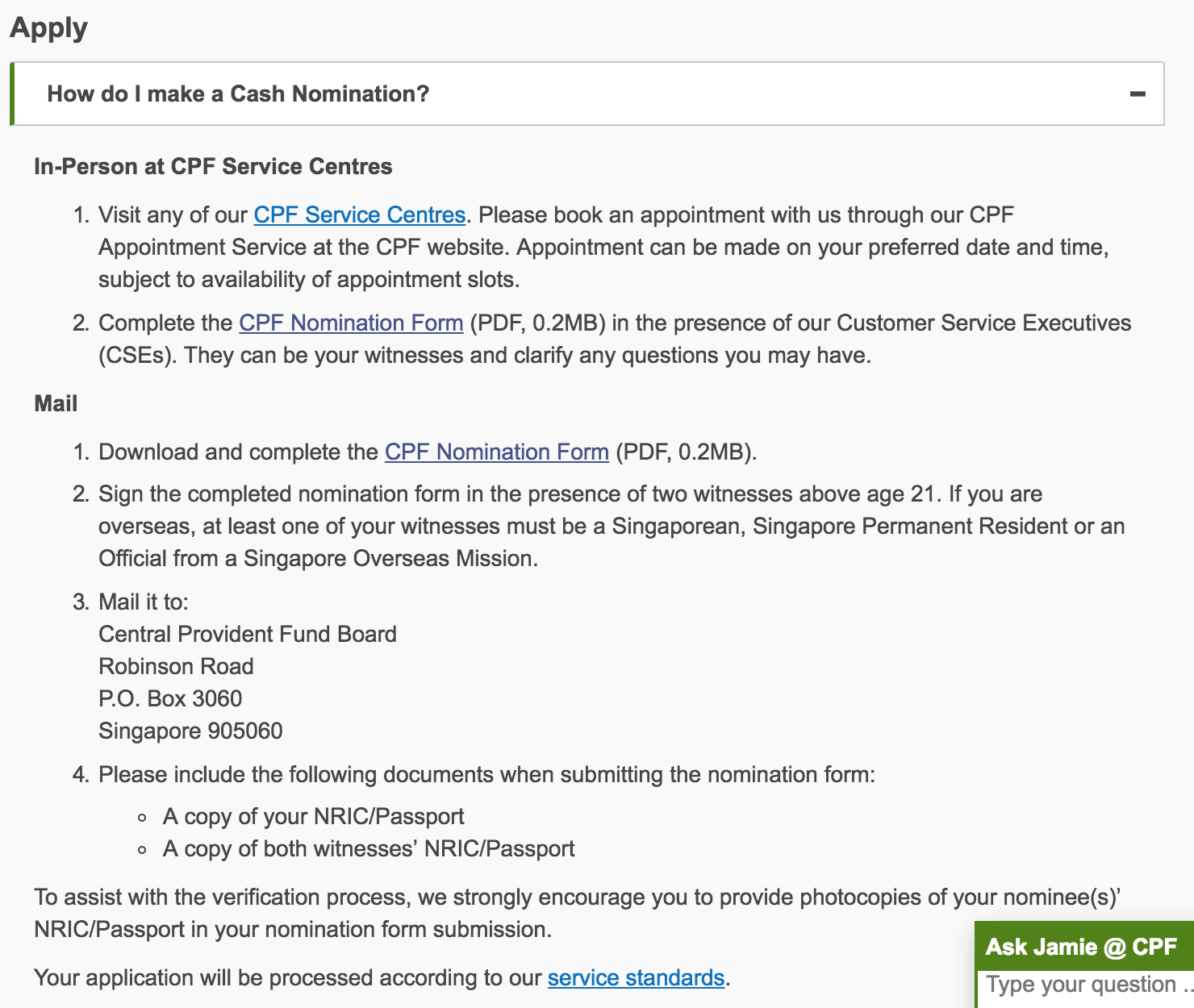 The irony of this is that the presence of the form may lead some people to think that a cash nomination is necessary, in order to ensure that their loved ones receive their remaining CPF savings in cash after they have pass on.

This isn’t true. Since all CPF savings are already disbursed in the form of cash to a member’s nominees by default (unless you specify otherwise), your loved ones are already receiving your remaining CPF savings in cash, even if you have not made any CPF cash nomination.

Of course, making an Enhanced Nomination Scheme (ENS) Nomination so that your nominees receive your CPF savings in their CPF accounts is also possible, but this is only done if you purposely choose that as your preferred distribution manner.

Read Also: 4 Common Questions About CPF, And Our Answers To Them

Understanding How Much Accrued Interest You Have To Pay: 4 Common Scenarios Most Singaporeans Will Face When They Own An HDB Or Private Property
Singapore Budget 2019 Liveblog : Live Updates And Commentary As It Happens