How well do you know your money? Commemorative coins on Hawker Culture in Singapore were recently launched by the Monetary Authority of Singapore (MAS) and sold by The Singapore Mint. The coins feature local hawker dishes such as Hokkien Mee, Nasi Lemak, Roti Prata and Kaya Toast, and they were designed to encapsulate the four hawkers from diverse cultural background.

Before you try to use these coins to pay for your purchases, here’s what you need to know about notes and coins that are legal tender in Singapore.

#1 Face Value Does Not Add Up To Purchase Value

Under the Currency Act (CA), commemorative coins such as the newly released Hawker Culture in Singapore series are deemed as legal tender in Singapore. This means they are legally recognised as valid payment and the vendor is obligated to accept the currency.

Of course, vendors can choose not to accept certain payments, but they must do so via a written notice to customer before a transaction. Otherwise, they would have to accept payment in all currency notes and coins up to the legal tender limit set out in the CA.

So, if you’re asking whether you can pay for your coffee with the commemorative silver coin with a face value of $5, the answer is yes. But the real question should be, why would you want to do that when you paid SGD 138 for it in the beginning?

#2 Maximum Of 20 Coins Per Denomination

Customers can use all coin denominations for payment, except that there is a limit of 20 coins per denomination for each transaction. This limit imposed by MAS is to minimise inconvenience to vendors and any waiting customers. Although in some instances, vendors appreciate customers making small payments in coins. A few stallholders whom we spoke to in the past mentioned that they can save on the coins exchange fee that banks tend to charge.

The 1-cent coin was stopped being issued in 2002 as it was not actively used by the public. You can still find 1-cent coins being circulated today, and you can continue to use them as legal tender since MAS has not demonetised it.

Commemorative and numismatic notes and coins are being issued by MAS to mark important national events and milestones, not to mention it caters to collectors’ interests, too.

Many avid collectors would trade commemorative and numismatic notes and coins at market value. And the market value is determined by the condition, theme, rarity and uniqueness of design. And while MAS doesn’t engage in secondary market transactions such as these, they are authorised to redeem these currencies at face value.

Damaged currency notes and coins are of zero value in the eyes of MAS. It is also an offence to mutilate any Singapore notes or coins under the CA and those found guilty will be convicted with a fine not exceeding SGD2,000. Common mutilation of currency would be if they are scorched or burnt, stained by ink, paint or other chemicals, defaced by markings or writings of words, figures and others, or have portions missing.

Although many people have exchanged mutilated currency at the local banks, in some situations when banks cannot determine the value of the damaged currency, they will send it off to MAS for a review and the review is not immediate. As MAS is the final authority, the banks will adhere to the value awarded upon review and credit the amount into your account.

Read Also: 4 Money Lessons Your Child is Missing Out On In A Cashless World

#6 No Exchange Rate Needed With Brunei 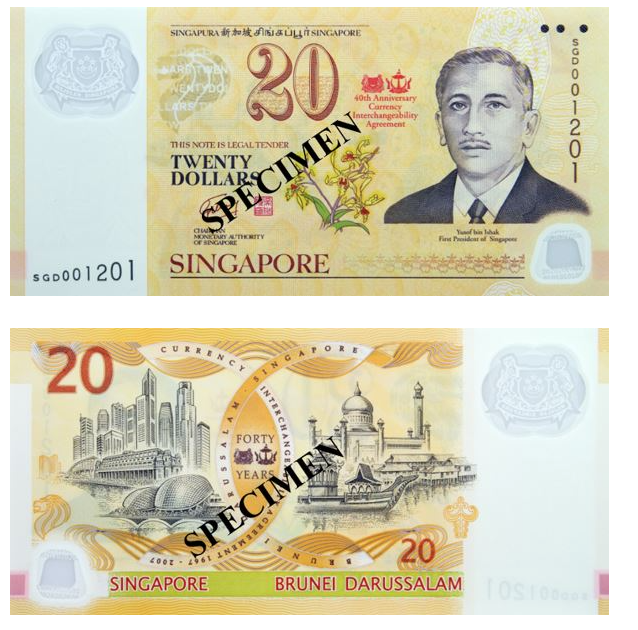 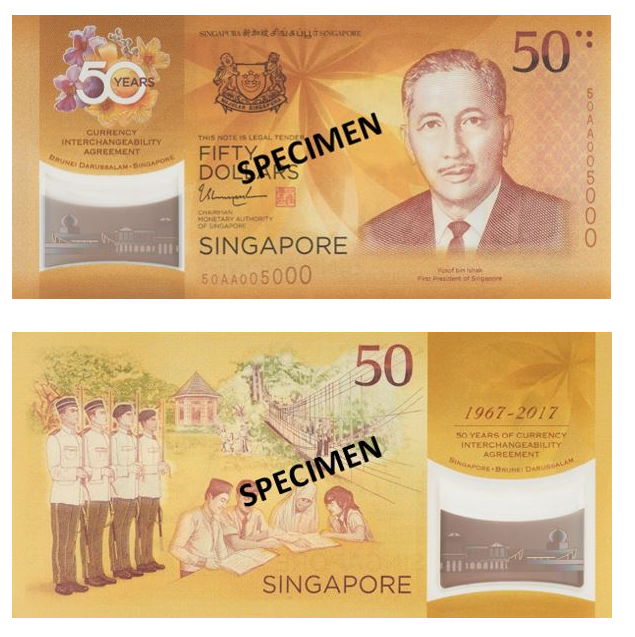 Brunei Darussalam’s currency is interchangeable with Singapore’s currency and banks in both countries accept it for deposit. The value of the currencies is on par and there is no charge or exchange rates between both currencies.

To celebrate the 40th and 50th anniversaries of the Currency Interchangeability Agreement between both countries, $20 and $50 commemoratives polymer notes were launched respectively and could be exchanged or bought at face value. 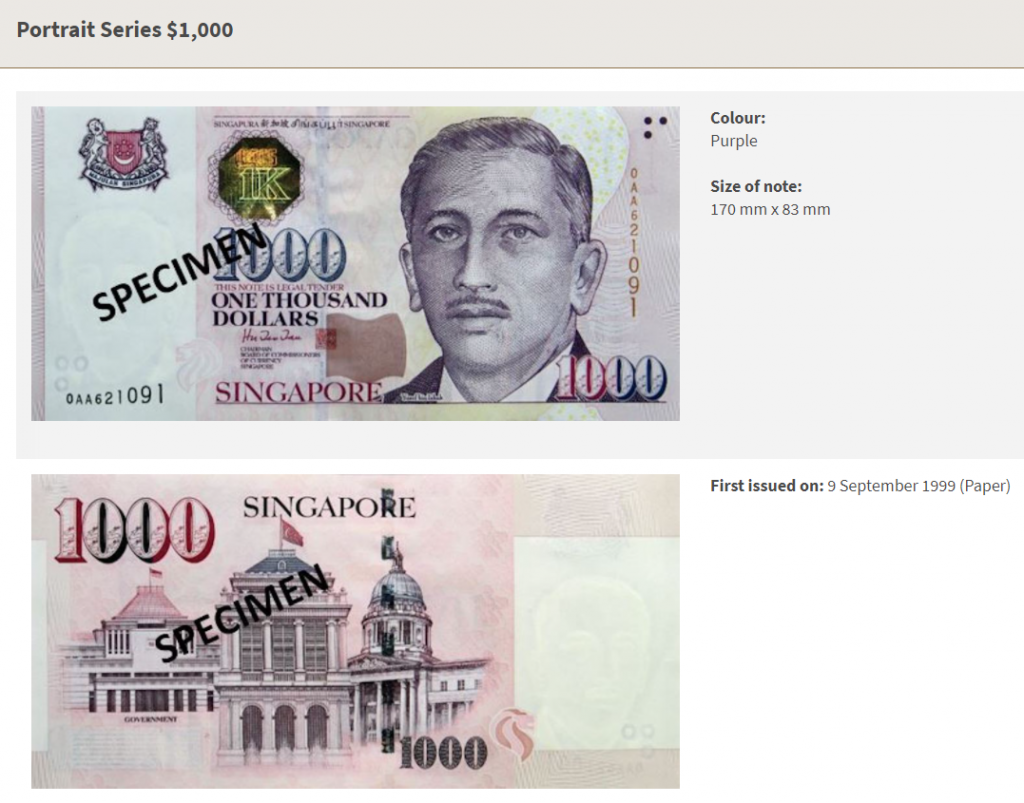 The $1,000 bill was discontinued in Dec 2020 to quench money laundering and terrorism financing risks that are usually transacted in large denomination notes.

To those who got their hands on the typographical error on the packaging of the SG50 commemorative notes where President Yusof Ishak’s name was mis-spelt, reframe your mind and think of it as limited edition.

Occasionally, notes can be cut wrongly, and printing errors can be spotted on some notes from different series. These error notes can sometimes fetch a high price from serious collectors.

#9 Not All Singapore Mint Coins Are Accepted As Legal Tender

The Singapore Mint is MAS‘ appointed commemorative and numismatic coin contractor. One of the most popular and regular series that The Singapore Mint have launched are the Chinese Almanac Coin Series. The coin series change every year to coincide with the Chinese Zodiac signs and carries face value, albeit with a much higher purchase price. 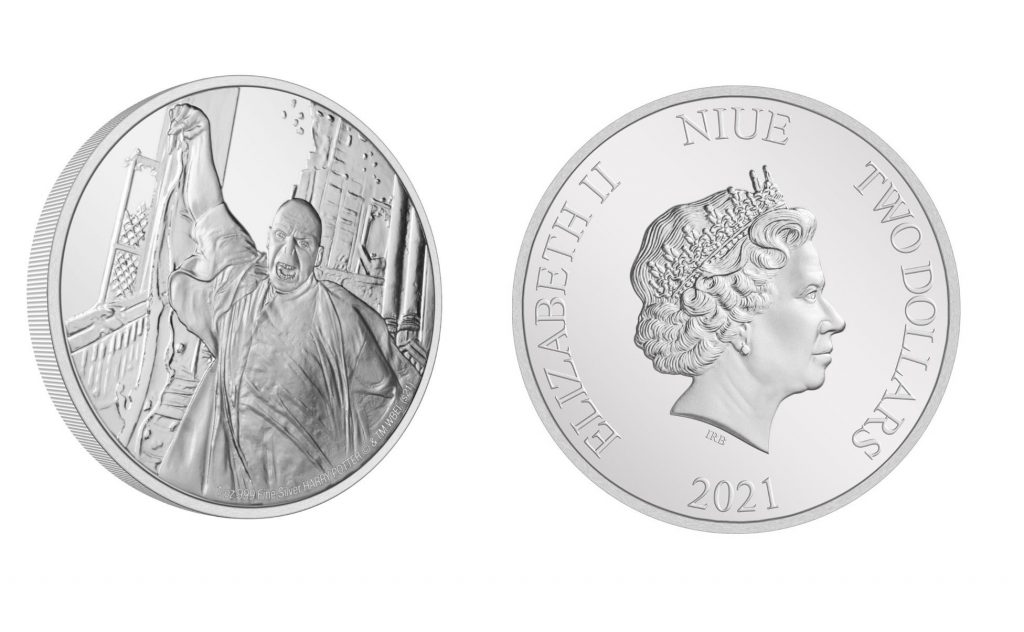 The Singapore Mint also carries gifts and collectibles that do not carry a face value and are not legal tender, such as Frozen 2 – Elsa 1oz 999 fine silver proof medallion with snowflake Swarovski crystal.

Unbeknownst to many, the first gold coin is not the $1 circular gold coin inscribed with an octagon that was first circulated by MAS in 1987. The first gold coin ever issued was in 1969 to commemorate the 150th anniversary of the founding of modern Singapore by Sir Stamford Raffles. It features the Raffles lighthouse and has a face value of $150.

For more currency facts and the history of currency in Singapore, you can read it here.